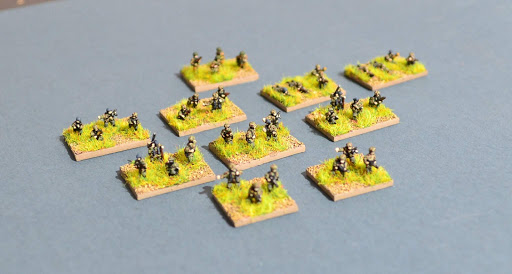 On the Workbench: Fallschirmjager & Rivers

Another batch of Fallschirmjager have been completed together with a British para engineer stand. 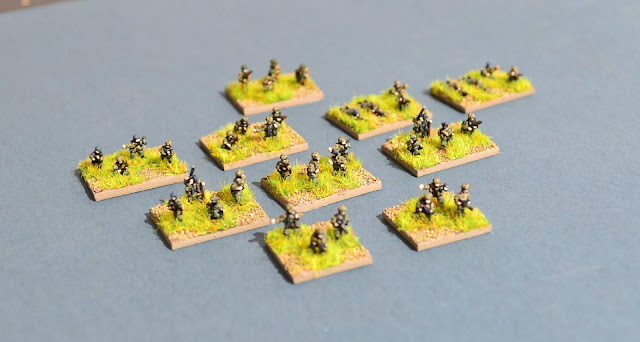 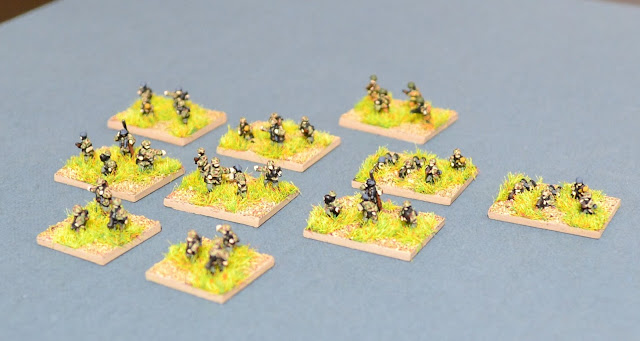 The Fallschirmjager are primarily for the Op Market Garden project. They are part of Kampfgruppe Walther being 3 reduced battalions of Fallschirmjager. I therefore needed 3 extra HQ's but decided they should be fighting HQ's on normal stands. Here I have completed 2 x MG42 stands (front row), 3 x HQ stands (2nd row), 4 x stand platoons with Panzerfausts (3rd row), and at the rear the British para stand.

I have also been experimenting with my 6mm river sections this week. There was a question on Facebook about why my rivers were so blue. I gave a flippant response "because I like it that way". The reality is that I have been considering for some time that I should repaint them. They were originally painted blue to match my commercially built terrain tiles but I have never been too happy with them. The Facebook comment gave me the spur I needed to take another look at these. 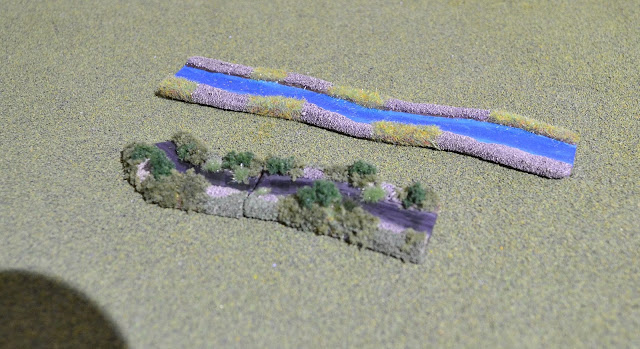 An 'old' and 'new' comparison. When you look at Google maps satellite view, streams and small rivers are usually heavily bordered by foliage and trees which quite often hide the water beneath. These river sections from Baccus are quite thick especially when sat next to 6mm figures. The plan is to hide some of that depth in foliage to give it a more natural look on the tabletop. I may try more foliage for the next sections with just very small bare patches. The odd tree would look good but I have to be careful of the practicalities of storage.
The river/stream bed was painted with a mixture of black/brown for the centre with a couple of shades of khaki nearer the banks. They were blended together while still wet. The surface is Woodland Scenics 'water' which is carefully poured on. It normally takes 2 or 3 coats to get the best results. 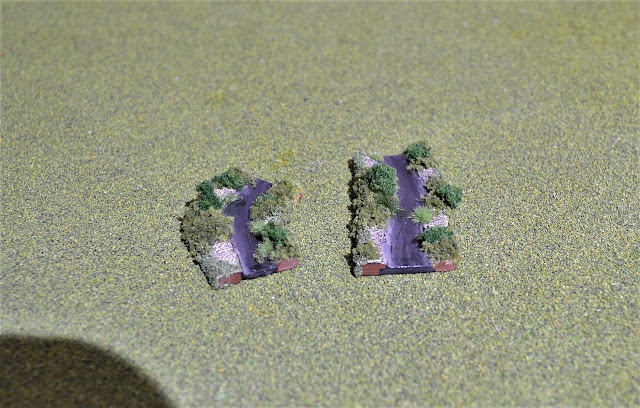 A couple more shots, and I think from eye level does not look too bad.
Who listened to the latest Meeples & Miniatures podcast? Fortunately for me they tend to talk about boardgames, skirmish level wargames or games involving 28mm figures. As I have given up on all those aspects of the hobby I am reasonably safe from temptation.
However, the latest was about 2mm wargaming! I was aware from previous episodes that Mike Hobbs had started a 2mm project which had already got my attention. I had dabbled in this scale over 20 years ago but never followed it up. My interest is this:
I have always liked the idea of fighting Austerlitz or Borodino but even in 6mm it would be difficult to do them justice without dedicating myself to another 'Waterloo' type project which could take years to prepare, not to mention the space required. I have never really liked the idea of one unit representing a brigade which would have been an option. The largest I can live with is battalion. This is where 2mm comes in. Mike Hobbs states on M&M that it takes just a few minutes at most to paint a unit. That I can well believe as you are only painting what is obvious. e.g. for French Line the front will be white with the sides and rear blue for the entire block. If primed black the shakos are already complete. Depending on the moulds there may be a need to paint faces for the first rank but I am guessing that would be it. I would not intend to base it leaving the unit as is.
Terrain may be a stumbling block. Easy enough for woods which would be just layers of loose Woodland Scenics clump foliage and buildings are available from Irregular Miniatures. Roads and rivers would be a trickier proposition. For rivers I would explore the option of using Acetate (as in the original Fire & Fury book) painted one side and bordered by loose foliage. Not sure at this stage about roads. Rolling countryside would be another problem for my modular terrain. I may have to go down the terrain mat route to solve that problem.
Rules is another issue. I battalionised Sam Mustafa's Grande Armee rules a few years ago which worked well. Another option is to explore the more recent offerings such as Blucher.
I would be determined though not to displace my existing projects so it would be one of those to sit in the background to be completed as and when the mood takes me. First up though is to get a few samples from Irregular Minis, see how they paint up including speed of painting, and make a decision from there.
Has anybody tried 2mm and if so any tips?
Source: grymauch

On the Workbench: Fallschirmjager & Rivers