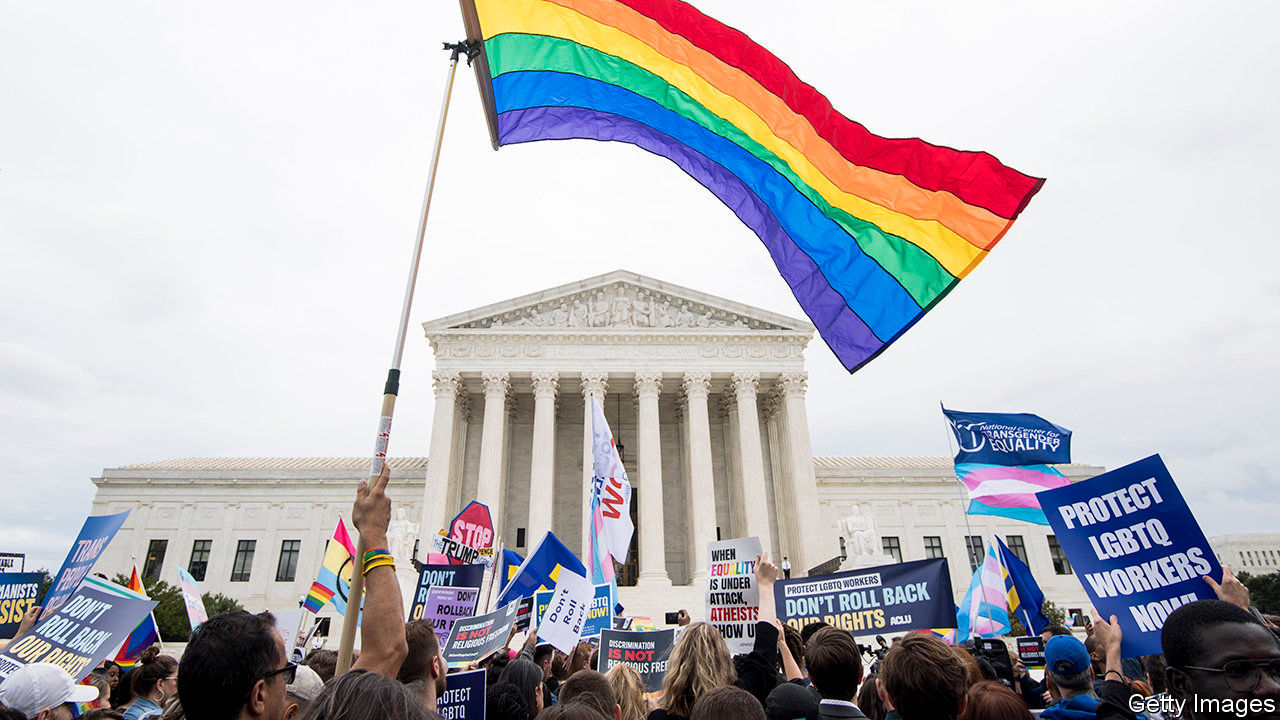 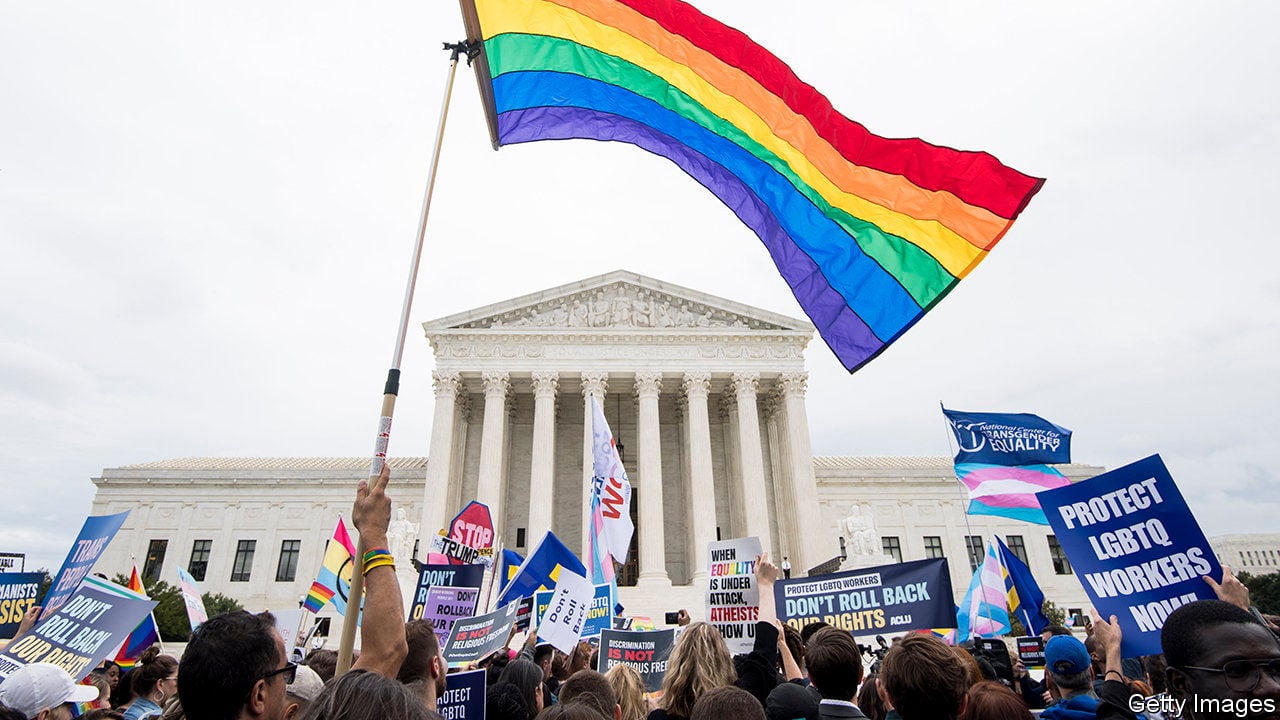 WHEN ANTHONY KENNEDY retired in 2018, gay-rights supporters fretted over the loss of a justice who had anchored four expansions of gay and lesbian rights—including the landmark decision opening marriage laws to same-sex couples in 2015. With Mr Kennedy’s replacement by the more conservative Brett Kavanaugh, and Donald Trump’s appointment of Neil Gorsuch 18 months earlier, LGBT activists worried the progress would come to a halt. On June 15th the Supreme Court allayed those fears with a momentous decision that protects gay and transgender people against discrimination in the workplace.

By a 6-3 margin, the justices ruled that Title VII of the Civil Rights Act of 1964—a provision that bars discrimination “because of” a number of characteristics including “sex”—prohibits firing or disfavouring workers on the basis of their sexual orientation or gender identity. To the surprise of many, the majority view was penned by Justice Gorsuch.

Roughly half of America’s states have civil-rights laws of their own protecting gay and trans workers, whereas the rest do not. So until the latest decision, known as Bostock v Clayton County, an employee in much of America could legally wed a member of the same sex over the weekend and be legally sacked for being gay when returning to work. Now some 8.1m LGBT workers across America will enjoy federal protection from discrimination when they clock in.

Supreme Court cases take years to litigate. The latest LGBT battle took about a decade. Two of the three plaintiffs in the cases did not live to savour their victory. Donald Zarda, a skydiving instructor in New York who was fired for being gay in 2010, died during a jumping accident in 2014. Aimee Stephens, a transgender woman fired from a funeral home after explaining her gender identity to her boss, died last month. Gerald Bostock, a welfare officer in Georgia, lost his job after he joined a gay softball league.

At the oral arguments last October, Justice Gorsuch was inclined toward the LGBT plaintiffs’ argument, saying the case was “really close”. But he worried that a win for them may herald “massive social upheaval”. Now as author of the majority opinion in Bostock—attracting the votes of Chief Justice John Roberts and the four more liberal justices—his concerns about practicalities seem to have disappeared. “Sex plays a necessary and undisguisable role” in an employer’s decision to fire a worker for being gay or transgender, he wrote, and that is “exactly what Title VII forbids”.

The cases are simple, Justice Gorsuch contended, as they involve “no more than the straightforward application of legal terms with plain and settled meanings”. Although that “should be the end of the analysis”, a host of Supreme Court precedents stand for the same principle. These involve discrimination against mothers, sexual harassment against men and other episodes of workplace bias Congress may not have contemplated in 1964. No one may have imagined half a century ago that Title VII would prohibit a boss from firing gay or trans workers due to their identity, but “major initiatives” like a civil-rights law often have “unexpected consequences”.

Justice Kavanaugh wrote a dissent admonishing the majority for legislating from the bench. “[W]e are judges,” he wrote, “not Members of Congress.” For the more vituperative Justice Samuel Alito (joined in dissent by Justice Clarence Thomas), the “radical” result in Bostock is based on “preposterous” reasoning. Although the majority invokes the late Justice Antonin Scalia’s teaching that judges should pay heed only to the words of a statute, Justice Alito wrote, “no one should be fooled” by the ruling. Justice Gorsuch’s opinion is “like a pirate ship” sailing “under a textualist flag” but silently “updat[ing] old statutes so that they better reflect the current values of society”. Americans living during the civil-rights movement would be “bewildered” to learn that Congress had come to the rescue of gay or trans workers. The meaning of “sex” in the Civil Rights Act is “indisputably” distinct from both sexual orientation and gender identity; it is only through a “breathtaking” act of judicial “arrogance” that the court could conclude otherwise, Justice Alito argued.

What are the broader implications of the ruling on LGBT rights? It depends whom you ask. Justice Gorsuch left open whether employers with religious objections to the gender identity or sexuality of their workers may one day claim an exemption from anti-discrimination laws. But his erstwhile concern about “massive social upheaval” is nowhere to be found in the majority opinion. Bostock is just about workplace rights, he wrote, not “sex-segregated bathrooms, locker rooms and dress codes”. The court does not “prejudge” these questions which are “for future cases, not these”.

Justice Alito’s 54-page jeremiad—not including a lengthy appendix—berated the majority for failing to grapple with the potential implications. The decision “is virtually certain to have far-reaching consequences”, he wrote. Many federal laws bar sex discrimination, and the majority’s “brusque refusal” to contemplate how they will be altered by the Bostock ruling is “irresponsible”. What about transgender employees challenging health plans that “do not cover costly sex reassignment surgery”, for example? Or women who have suffered sexual assault, for whom viewing “the anatomy of a male in a confined and sensitive location such as a bathroom or locker room can cause serious psychological harm”? Or a transgender person’s desire to compete in a sporting “competition previously reserved for members of one biological sex”?

Matters like these, the plaintiffs argued, involve separate facts and distinct legal questions. A group of law professors told the justices in a friend-of-the-court brief, for example, that while getting fired is a “severe harm”, being asked to use sex-segregated bathrooms is not, and would not give rise to a similar legal claim. So fears of a “purge of sex-segregated restrooms across the nation are...decidedly exaggerated”. The plaintiffs’ lawyers argued that other “sex-specific” policies may be “justified...as reasonably necessary” in an office. So the questions Justice Alito posed need not be resolved—or even explored—before giving LGBT Americans protection against discrimination in their workplaces.

Although organisations like the Centre for American Progress (a liberal advocacy group) are hailing the decision as a “watershed moment for LGBTQ people”, some note a darker lining in the approach that led to the civil-rights victory. Deepak Gupta, a Supreme Court litigator, calls Bostock “a conservative masterstroke—a move designed to defend a brand of textualism as entirely principled for years to come, even if it never again delivers an outcome this progressive”. Textualism, like any method of legal interpretation, can be exercised opportunistically; in Bostock the court may have deployed it for a liberal cause, but the conservative majority may also resort to it for myriad conservative ends in the future.

For now, Bostock seems bound to serve conservatives with an example of two justices playing against type to burnish the image of the Supreme Court as a fair-minded tribunal. Chief Justice Roberts is particularly keen to rescue justices from the charge they are just politicians in robes. For Scalia, a vote in 1989 in which he joined the liberal side of the court to strike down a law banning flag-burning was his Exhibit A of how his jurisprudence is rooted in law, not personal ideology. Justice Gorsuch, his successor, now has a similar landmark.

In 1989, Scalia joined the liberal side of the court to strike down a law banning flag-burning. That was his Exhibit A of how his jurisprudence is rooted in law, not personal ideology.■