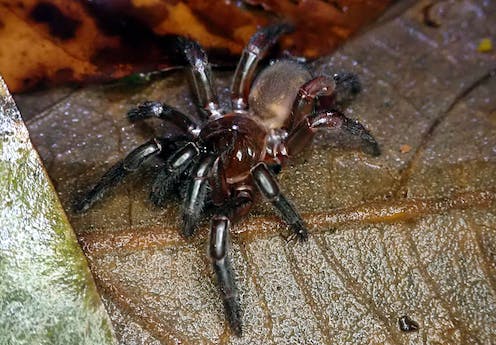 Trapdoor spider species that stay local put themselves at risk

Several new species of trapdoor spiders found in Queensland are finally described in an article published this month in Invertebrate Systematics.

But each of the new species occurs in only its own single, isolated patch of rainforest in southeastern Queensland, and nowhere else.

Because these species have such tiny natural distributions, they are especially vulnerable to extinction.

Read more: The first known case of eggs plus live birth from one pregnancy in a tiny lizard

These newly described spiders have been given the common name palisade trapdoor spiders because of the strange and unique burrows they construct. The entrance to the burrow projects out from the surrounding soil like a miniature turret.

Not only that, but each of the four new palisade trapdoor spider species constructs its own unique type of burrow.

One species, found in national parkland near Gympie and known scientifically as Euoplos crenatus, constructs a particularly elaborate burrow. The hinged door that covers the burrow entrance is adorned with several rounded lobes which project from the door’s circumference.

This marvel of natural architecture is constructed by the spider using silk and soil. No other spider species in the world constructs something similar.

This species was originally discovered by local naturalists Kelvin and Amelia Nielsen in 1999, who then guided researchers back to the discovery location in 2016 to collect specimens so the species could be formally named.

Another species, Euoplos thynnearum, constructs a burrow entrance with a thick lip within which the burrow door sits. It’s found in the Mary Cairncross Scenic Reserve, a 55-hectare patch of subtropical rainforest popular with visitors to the Sunshine Coast hinterland.

This species is named after Elizabeth, Mabel and Mary Thynne, who originally donated the reserve land to the local council in 1941 to honour their mother Mary Thynne (née Cairncross). Currently, this species is known to occur only within the reserve and in other rainforest patches in the immediate vicinity.

Species that only only occur in a very small area, like these new palisade trapdoor spider species, are known as short-range endemic species.

Although scientists are naming new species at a faster rate than ever before, estimates of the total number of species on Earth still suggest that most animal species have not been formally named. With so much work still to do, some scientists have chosen to prioritise work on particular types of animals that are especially vulnerable to extinction.

In 2002, Mark Harvey, an arachnologist from the Western Australian Museum, proposed that scientists should prioritise the discovery and description of short-range endemic species.

He reasoned that the small ranges of these species make them inherently vulnerable to extinction, and that identifying, naming and studying them is the first step to protecting them.

For trapdoor spiders, short-range endemism is the rule, not the exception. These spiders live their entire lives in a burrow. Juvenile spiders walk only short distances from their mother’s burrow, before constructing a burrow of their own.

Usually, these spiders will then remain in the same burrow for the remainder of their lives, enlarging it as they grow.

Adult male trapdoor spiders will also leave their burrow to breed, but will only travel relatively short distances. Over time, this extremely limited dispersal ability has led to the evolution of many different trapdoor spider species, each of which occurs in only a very small area.

So far, this project has led to the description of more than 100 new species from throughout Australia, some of which are already classified as threatened by federal and state governments.

The most iconic of these is Idiosoma nigrum (also a shield-backed trapdoor spider), which is a listed threatened species.

The discovery of all these weird and wonderful spider species should remind us that Australia has some of the most remarkable invertebrate species in the world, and new species are waiting to be discovered in the national parks and reserves which occur around, and even within, our towns and cities - under our noses.

Next time you visit a national park, or drive past a patch of forest while commuting along Australia’s east coast, think to yourself, what might be living in there? Do those species occur anywhere else? And above all, if we lose that forest remnant, what unique species might disappear along with it?

Jeremy Dean Wilson does not work for, consult, own shares in or receive funding from any company or organisation that would benefit from this article, and has disclosed no relevant affiliations beyond their academic appointment.

Trapdoor spider species that stay local put themselves at risk