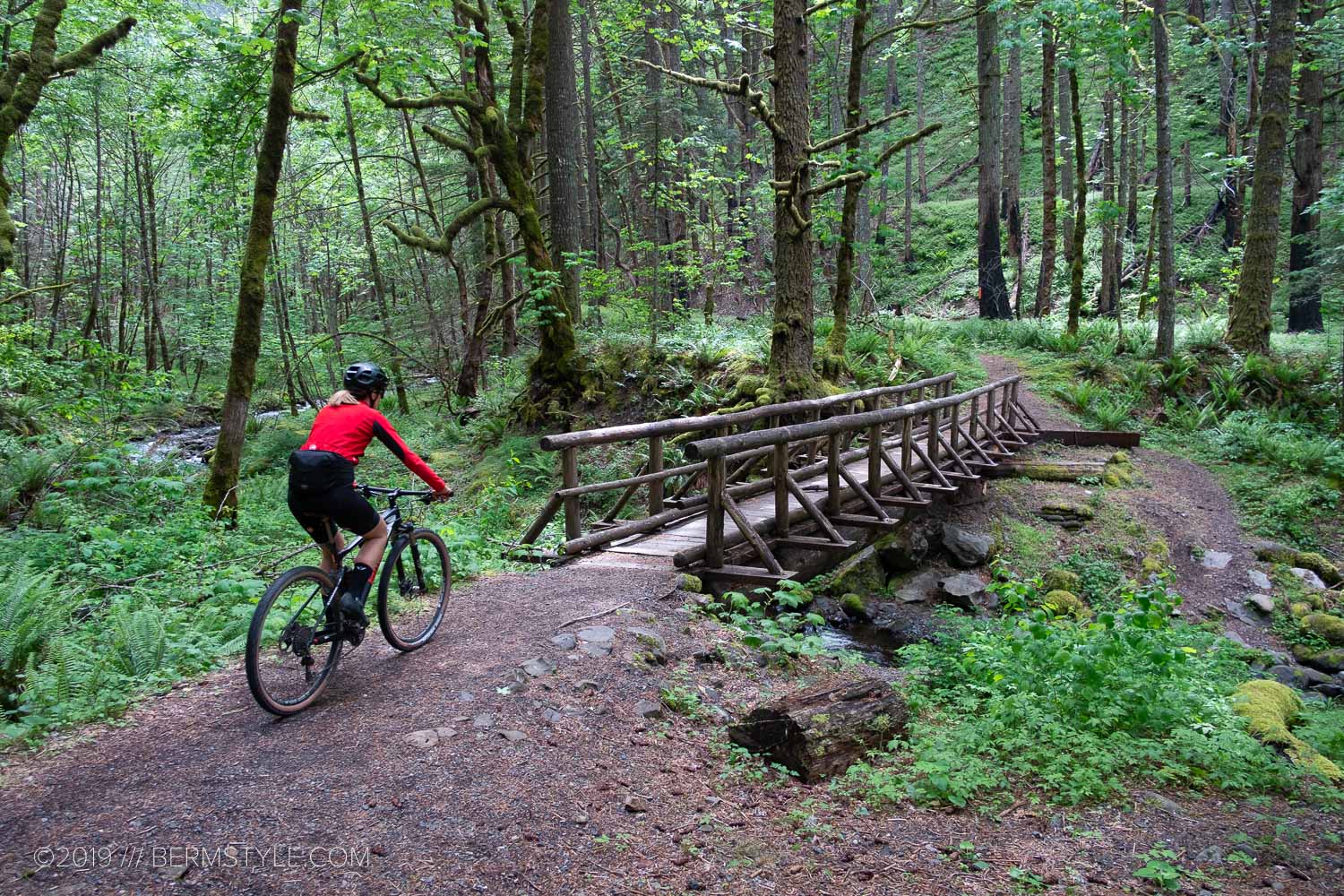 Each time I drive the stretch of Interstate 84 between Portland and Hood River, I wonder why there isn’t a single track trail connecting the two cities. A paved multi-use path is currently in construction, visible from the freeway. But why isn’t there a natural surface trail? Here’s the thing: there is one, and its the biggest non-secret, secret trail around: Gorge Trail #400. 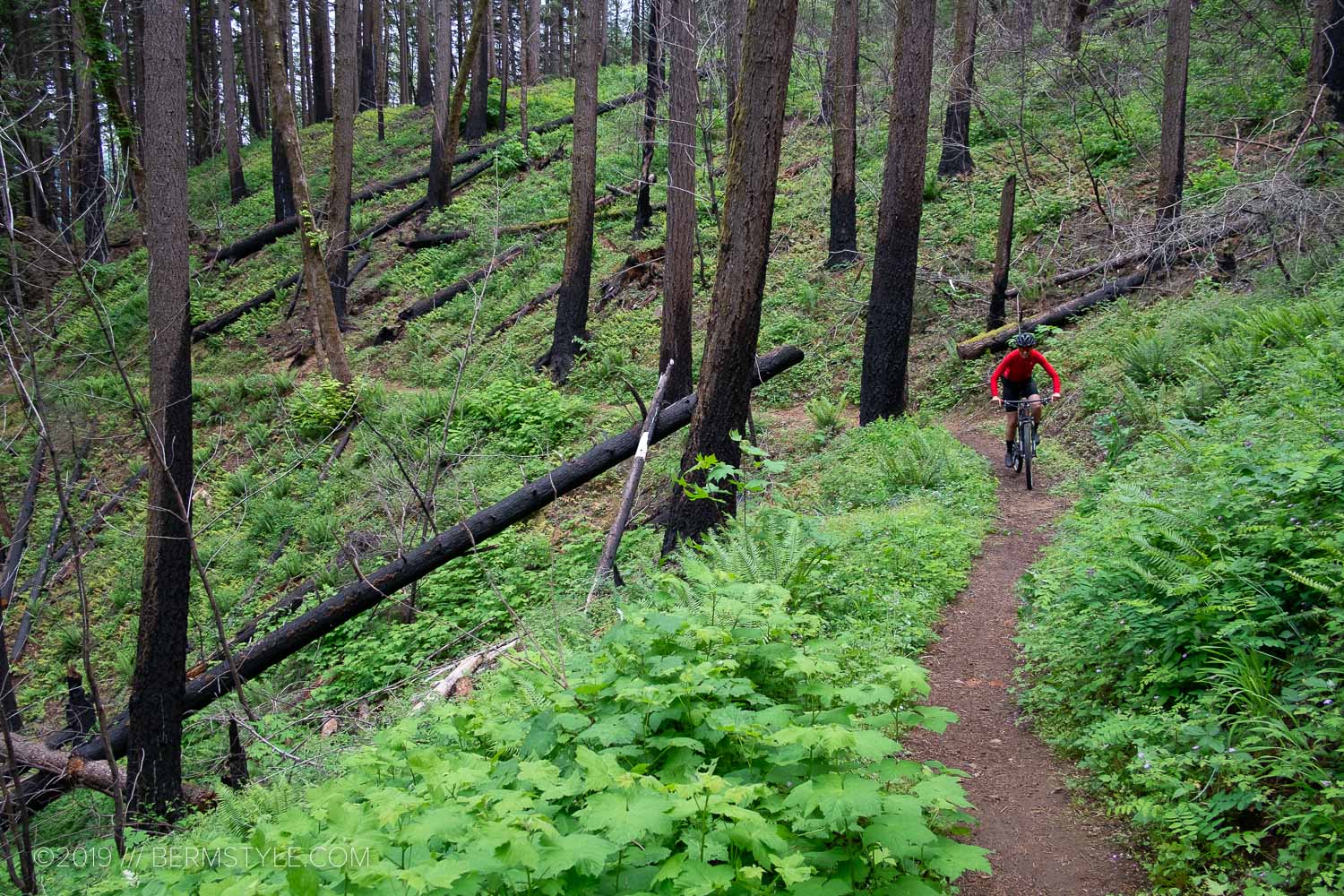 Climbing up while headed west.

I’ve wanted get to know the area for some time and finally explored it a year or two ago, starting (if I recall correctly) at the John Yeon State Park trailhead. Making my way east, the route would be completely deserted at points, only to become congested at intersections near waterfalls or other scenic features. Although I was careful to limit our ride to bike friendly, multi-use sections, many of the other users were rude, and even accused us of riding off-limit trails.

Even more frustrating, much of the signage was not clear on whether it is a bike friendly section.

The route I ended up completing had us exiting where the trail overlaps with the PCT; bikes are booted at this point. We exited near Cascade Locks and pedaled the paved path to return, logging just under 20 miles of pedaling. 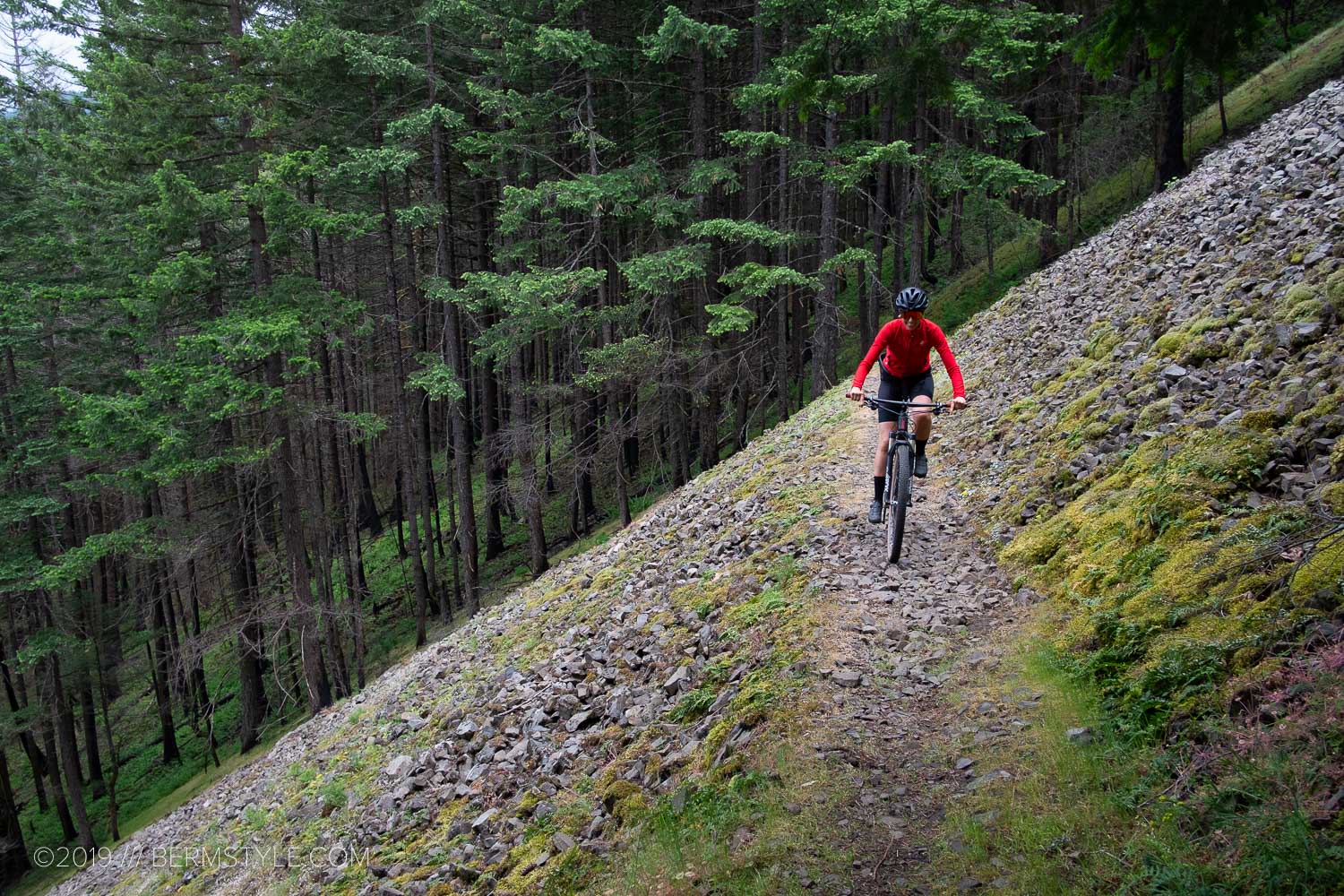 Exploring the Wyeth Segment of Trail #400

I returned for another go at Trail #400 this weekend, starting at the Wyeth Campground. I hadn’t yet experienced the last segment, as it doesn’t actually connect at the moment.

The area is currently receiving some work, and a new parking lot was under construction. Not knowing the fee status of the area, we parked off the side of Wyeth Road to avoid any unpleasant surprises. Pedaling up through the campground, we discovered the trailhead and rode the trail headed eastward. 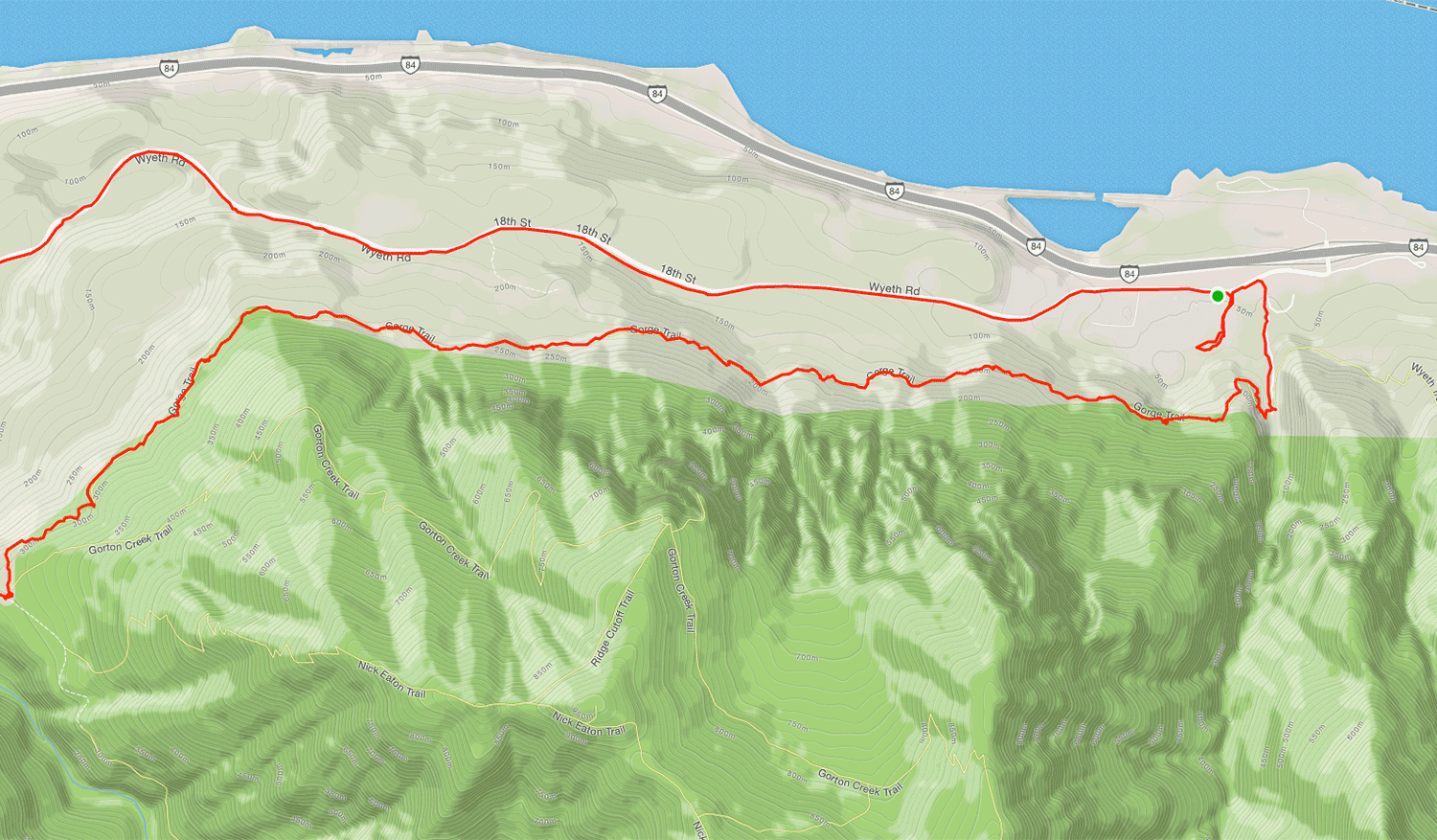 Trail #400 is a classic XC single track, and the Wyeth to Herman Creek Segment rides just like the other sections. Most of the tread is fairly tame, but there are some rocks here and there. Our XC hardtail 29″ bikes were well suited for the route, as we were often off the bike, portaging over downed trees. It made progress slow at times, and we lost track of how many downed trees we encountered after 15 or 16.

Considering the actual length of this segment was only 3.62 miles, it felt much longer with all the off the bike hiking. As an out and back its just over 7 miles of xc riding. The other segments make for a better experience, but it’s tough to say what is currently open due to the information currently available. 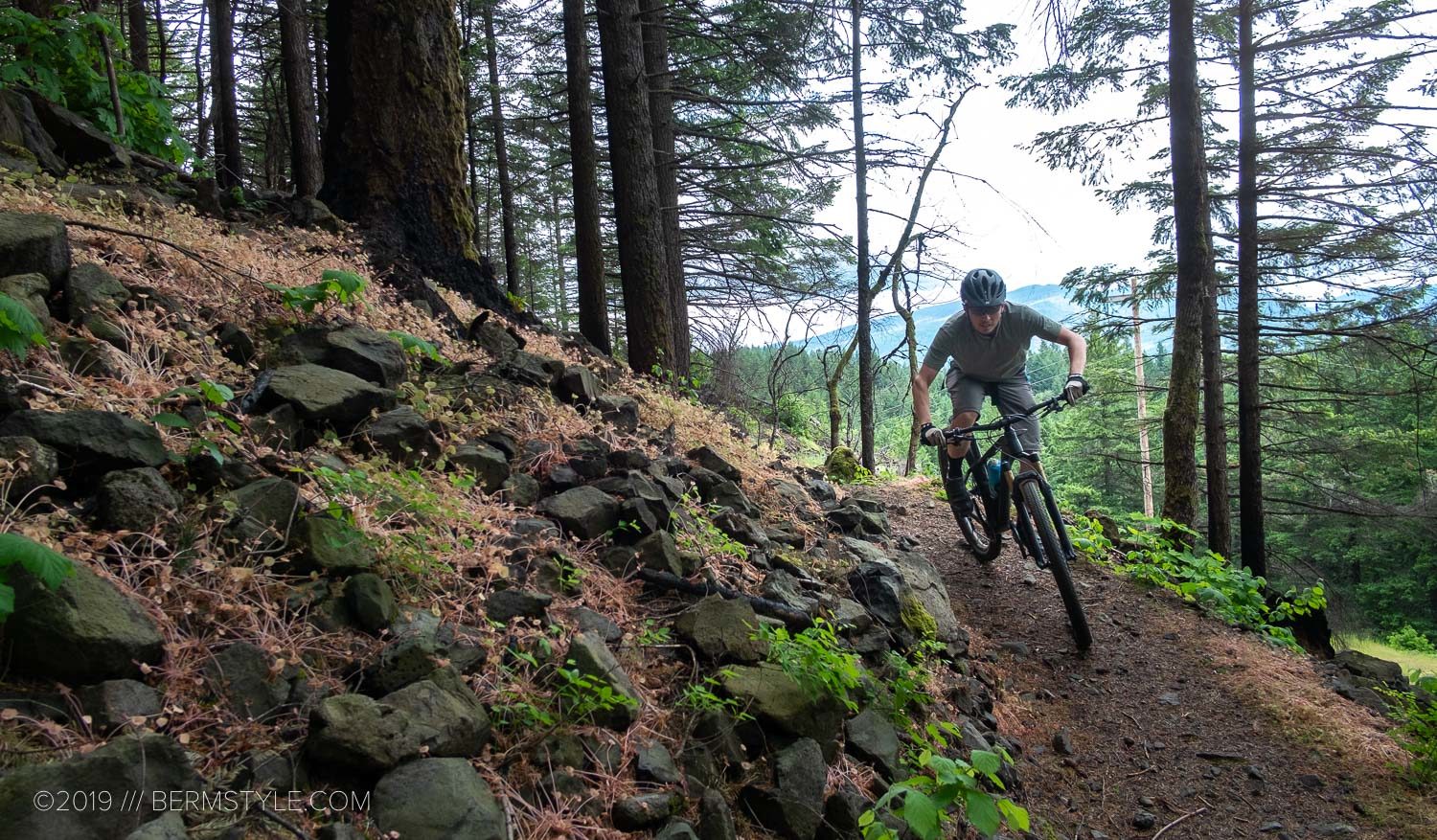 Because this section doesn’t really connect to the rest of the trail it’s typically ridden as an out and back.

To be clear, they do connect, for the most part. If you’re looking to ride the length of the route, you’re routed onto the multi-use path and a section of road now and then, but as the trail parallels the I-84, you simply continue along until the next entrance is apparent.

While bikes are allowed on a number of segments, the area’s primary user group is hikers, with trailheads dedicated to routes to connect to waterfalls, picnic areas, and campsites.

The recent fire took a major toll on the trail, with much of the rock and hillside being left unstable. If finding the route was difficult before, it’s even worse now, as most of the segments appear to be closed for the time being. 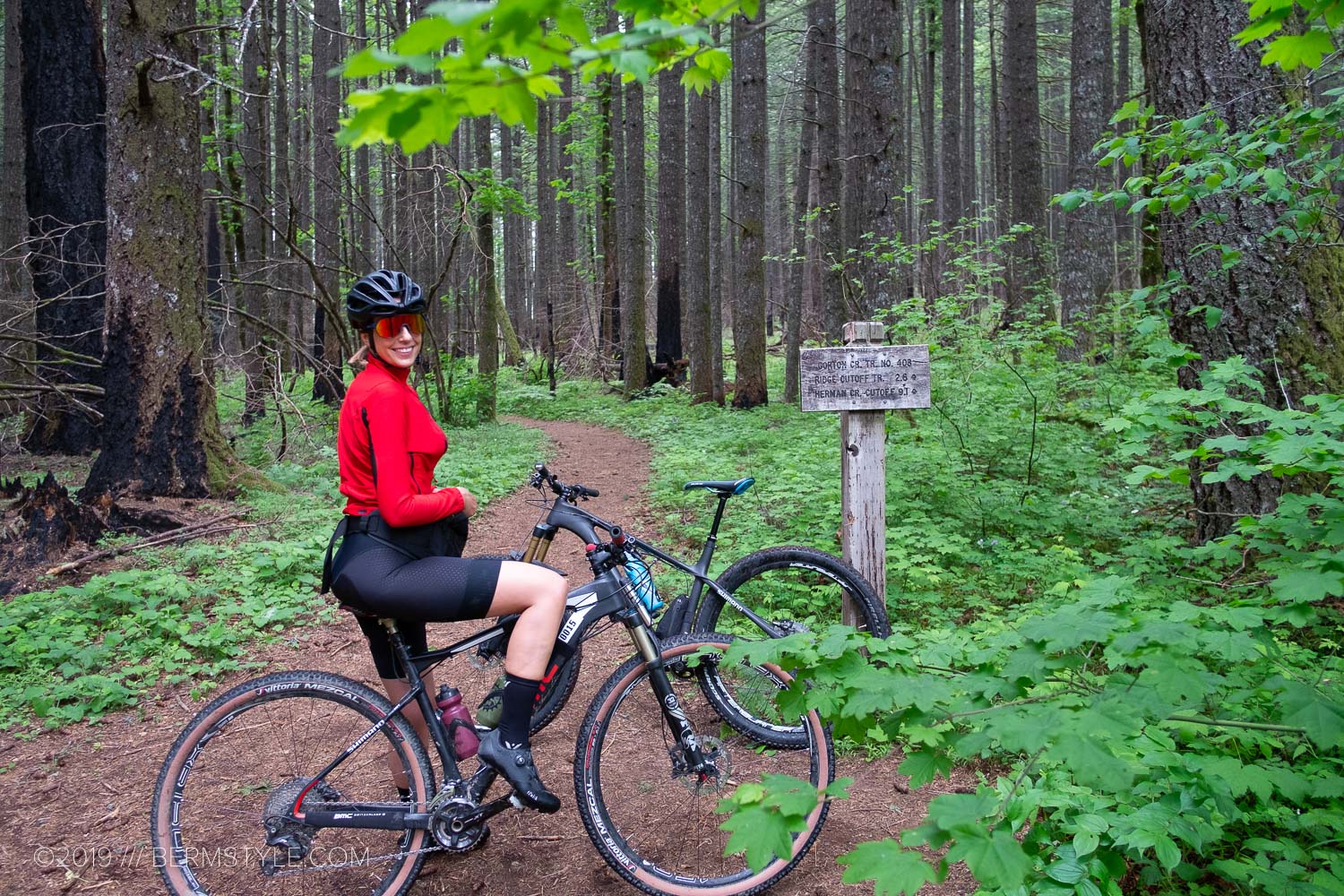 The Trail begins at Angel’s Rest Trailhead on the Historic Columbia River Highway and ends at Wyeth Trail #411 near Gorton Creek. Parts of this trail “piggyback” on other system trails.

Mountain bikes are allowed on the Gorge 400 Trail from John Yeon Trailhead (area is unavailable) east to Moody Road in Cascade Locks, OR, and from Wyeth Campground west to Herman Creek Trail #406.  Bikes are prohibited between Angel’s Rest trailhead and Ainsworth Campground and between Moody Road and Herman Creek trail #406

Gorge Trail #400 – Cascade Locks to Wyeth (Bikes only allowed on the 3.4 mile stretch from Wyeth Trailhead to Herman Creek Trail #406)