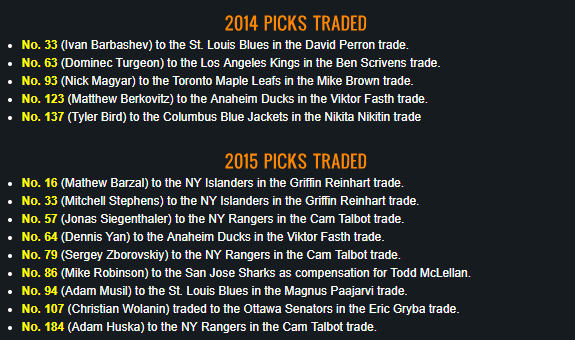 Glen Sather was a man for his time. I don’t think any one individual today could handle all of the work, motivate by intimidation, suppress salaries and fleece Lou Nanne like Slats did a lifetime ago. Assuming the Oilers find a general manager who can judge talent like Sather, where will he start and what will he send away? It’s a fascinating conversation.

The Athletic Edmonton features a fabulous cluster of stories (some linked below, some on the site). Great perspective from a ridiculous group of writers and analysts. Proud to be part of the group.INSANE NEW OFFER IS HERE!

The first thing ‘new Glen’ is going to do is take stock of his inventory. We’ve discussed some of these things recently, but let’s put them all in one place so we can revisit over the summer.

GETTING VALUE FOR THE PICKS

One of the questions I would ask all of the potential general mangers is “Do you think it’s a good idea to trade a pick for this team, this year?” Why would I ask that? Here are the Oilers most recent drafts and the picks dealt (and player chosen).

I have no quarrel with trading a draft pick for full value, but if the Oilers don’t sign Hayden Hawkey two of the three picks dealt in 2018 won’t help this team in the future. A good rule of thumb is one pick for each round, and Edmonton is close at the 2019 draft (six picks, including four inside the top 100 overall).

It’s time to play ‘a bunch of guys I like’ based purely on math. Link is here.

WHAT WOULD GLEN DO?

I honestly think Sather would show patience, recognizing that Chiarelli’s aggressive plan reaped only short term (and fleeting) results. Grabbing Peyton Krebs in the first round, maybe signing Tyler Ennis or Brandon Pirri instead of a big money addition.

I also think he would allow all of these young blue to rise in competition with each other. There’s no doubt in my mind he would take two rookies on blue this fall if he thought they had earned it. I don’t know if the current Oilers have that kind of ‘outside the box’ thinking. Then again, who are the ‘current Oilers’ anyway?

A busy day with terrific guests! It all starts at 10, TSN1260. Scheduled to appear: