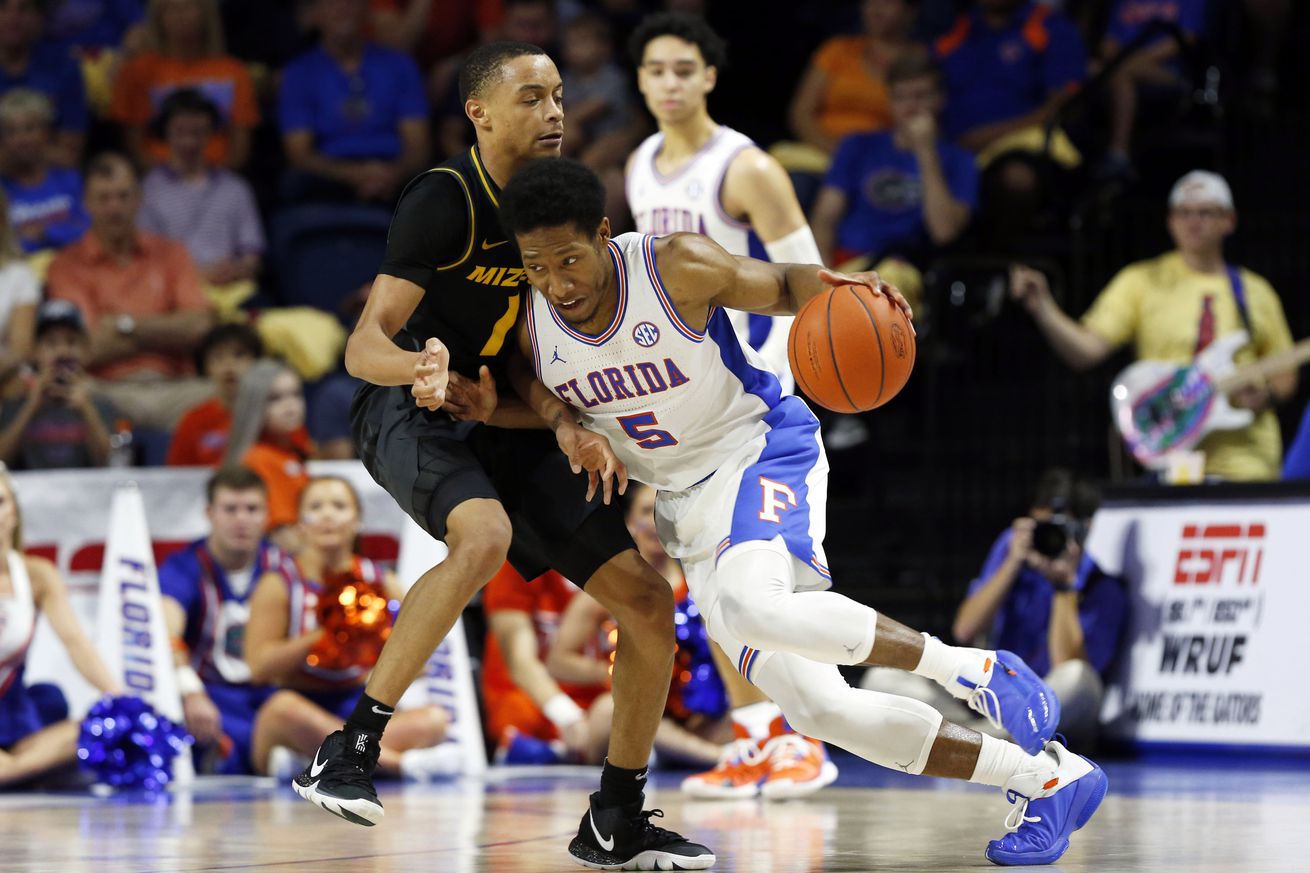 Honoring a team whose mantra was “Find a way,” the Gators did just that.

The Florida Gators celebrated the 25th anniversary of their first trip to the Final Four in 1994 on Saturday by wearing retro uniforms that resembled those of the era and bringing back many of the players from that team to honor during the game.

They also paid a fitting tribute to that team’s “Find a way” mantra by digging deep and scraping back from a 12-point deficit to get a 64-60 win over Missouri that was far more relieving than resounding.

The Gators struggled for much of the first half, relying on Isaiah Stokes for consistent offense while KeVaughn Allen and Noah Locke started slowly from the field. Stokes would score six points in good minutes during the period, but Missouri’s Jeremiah Tilmon scored the Tigers’ first six points before foul trouble, and the Tigers made four threes and quelled a Florida run with an 8-1 stretch into halftime to take a 33-24 lead at intermission.

And that lead would swell to 12 early in the second half, on a Jordan Geist three, before Florida calmed down and took advantage of a flagrant foul on Tilmon for a five-point possession. Missouri would answer that with a late-clock shot to go up nine, but Florida’s 9-1 run from that point brought what would be a tightly-contested game within five points for good.

And when Florida needed to execute most, it did, getting a huge Locke three to take the lead for the first time in the second half, an important 2-for-2 trip to the line from Kevarrius Hayes to take it back for good, and five more necessary free throws down the stretch in a game in which both teams combined for one made field goal in the final three minutes.

Allen would live at the line on the day, making nine of 10 freebies for most of his 17 points, and Jalen Hudson (11 points, two threes) and Keyontae Johnson (13 points and a game-high seven rebounds) would join him in double figures. But this one was won mostly by Florida’s defense doing just enough when it had to do.

Missouri had three chances to tie or take the lead times in the final 1:19, on a missed and-one free throw from Reed Nikko and shots by Torrance Watson and Javon Pickett, but the Tigers came up empty on all three — and Florida, which made 25 of 30 free throws one game after only shooting 13 in Baton Rouge, was steady enough at the line to compensate for woeful shooting from the field (42 percent) and behind the arc (20 percent).

Missouri ended up shooting just 42 percent from the field in its own right. But while the Tigers made five more shots than the Gators, Florida’s ability to defend (mostly) without fouling on a day when the refs got whistle-happy kept the Tigers off the line, where they made just eight of 13 free throws.

This victory won’t go down in history like that 1994 team, and this 2019 team probably isn’t destined to remembered for much more than its fight.

But these Gators have won four straight by finding new ways to win. And even if those ways aren’t photogenic in the slightest, winning is preferable to the alternative.