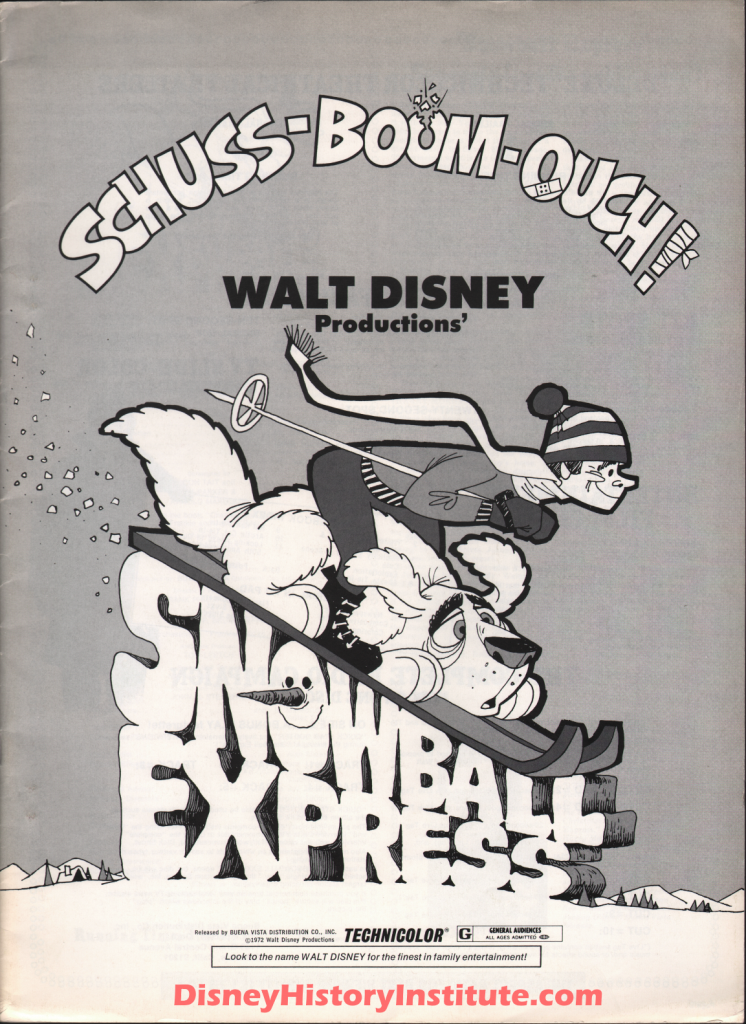 In our last article, we covered the synopsis and were introduced to the primary cast of Snowball Express. This time we are going to look at the supporting/supplemental articles that are included with the pages of the Snowball Express Campaign Manual. Each Campaign Manual that Disney sends out contains fun and insightful pieces to help try and get the audience excited to come to their local theater to watch the latest movie. But we also know that Disney continually re-releases their film collection, so we can see what else they may add to their promotional materials a few years later.

We are going to look at four articles that are in the 1972 Campaign Manual. Each gives another look to help get folks into the seats, and gives us readers more information as to the making of this film.

The mammoth undertaking of bringing Walt Disney Productions’ way-outdoor comedy feature, “Snowball Express,” starring Dean Jones, Nancy Olson, Harry Morgan and Keenan Wynn to the screen would make an epic documentary of a movie. For it was shot under the most impossible weather conditions since Admiral Richard E. Peary discovered the North Pole in 1909.

Logistically the operation was a staggering one. There was a cast and crew of some 125, and a caravan of heavy vans, trucks, busses, kitchens and “honey wagons” (rest and dressing room facilities) to move out to the location site each day. And almost every morning the shooting schedule had to be juggled to fit the existing weather, be it blizzard or just plain overcast.

Some dark mornings the snow might be blowing so thick and the visibility would be so bad, or the temperature so low — minus 36° at one time — that the company was delayed in mushing forth.

Then, when the weather cleared, to make up time, scenes that were written to be played inside were reworked and filmed out-of-doors. For instance, a very romantic one between Dean Jones and Nancy Olson, that was planned later as an interior, Norman Tokar had to direct out in the snow. It was very effective, coming off with great warmth, because Dean and Nancy were so cold they huddled together for survival.

The company was moved into the heavily-laden mountain snow area by snow tractors and snowmobiles, where a hotel set and a makeshift ski lift had been constructed. Behind the scenes the enclosed back of the hotel was used as a vast warming room, a first aid station, a schoolroom for Johnny Whitaker, and a refreshment stand, which featured steaming coffee, hot chocolate, water (cold), Danish pastry, and around ten o’clock, as a real morale booster, chili con carne was served. A full course lunch was brought up to the location around 12:30 P.M. and dished out, commissary style. Vinyl-covered quonset type huts, with butane heaters, sheltered the group at mealtime.

An ordinance put on the books of Crested Butte, Colorado banning snowmobiles from the main street of this small former mining town, and at a regulated speed of only five miles-per hour on the side streets, was temporarily suspended to allow Walt Disney Productions to film a snowmobile race sequence during its location shooting of the way-outdoor comedy feature, “Snowball Express,” starring Dean Jones, Nancy Olson, Harry Morgan and Keenan Wynn.

The town patiently put up with the deafening noise, the heavy exhaust fumes and the speeding machines for about a week. Why? The editor of The Crested Butte Chronicle summed it up this way: “The Disney people have been considerate of the town and its residents. The production has disturbed little or nothing.

Their presence has proved a generous windfall that has helped the area through what might have been a lean January, traditionally a slow month here.”

Twenty vehicles, each with a pair of riders, gunned their engines at the starting line for the beginning of the picture’s big scene, then raced through the town heading for the hills. In story competition were Dean Jones and partner Harry Morgan; Keenan Wynn and rider George Lindsey, while on the sidelines Mary Wickes and Michael McGreevey and the local citizenry cheered their teams.

The little, old former mining town of Crested Butte, which snuggles against the great Rocky Mountains in the southwestern part of the state, would prefer to remain undiscovered, even though it is within a few miles of a rapidly developing new ski area and the site of Walt Disney Productions’ way-outdoor comedy feature, “Snowball Express,” starring Dean Jones, Nancy Olson, Harry Morgan and Keenan Wynn.

Its population, of about 300, is made up of urban dropouts who have forsaken the sprawling, hectic, polluted cities for the compact, quiet, clean air breathing life that a small mountain town offers.

Most of the former professional people who make up its ranks, and the new wave of ecology-minded youth, are dedicated individualists who are setting up their own businesses, or accepting any jobs that allow them to take advantage of the skiing slopes in the winter, and give them ready access’ to the varied activities of high altitude summer living.

Now they are afraid that the restless population movement, the growing search for less crowded ski trails, away from Aspen and Vail, and the discovery of Crested Butte by movie companies might possibly change their coveted way of life.

Dean Jones is always on the move in his pictures for the Walt Disney Studio. In the seven he has made there the stories have had him involved trailing a Siamese cat, chasing after dogs, monkeys and ducks, confronting a pirate ghost, riding a frightened horse, a motorbike and driving souped-up cars.

Now in Disney’s way-outdoor comedy feature, “Snowball Express,” filmed in the Rocky Mountain country of Colorado, and in which he stars with Nancy Olson, Harry Morgan and Keenan Wynn, daredevil Dean takes to the slopes as a neophyte skier: clumsily forward and unexpectedly backwards, sometimes upright, but more often on his back or stomach.

The played strictly for laughs storyline has him rescuing an accident prone skier in a cliff hanger of a scene, caught behind a runaway engine, entering a no-holds-barred snowmobile race to win money to convert a rundown mountain hotel he’s inherited into a ski resort.