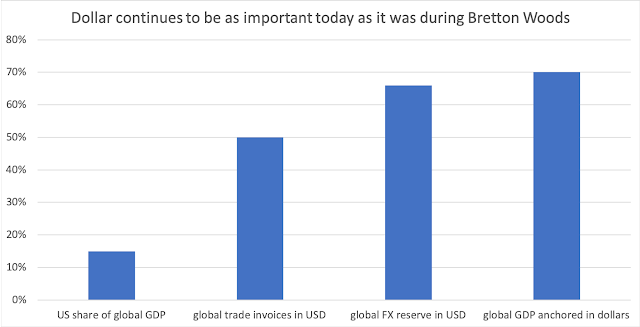 Today the Fed made an excellent decision in expanding the list of CBs eligible to USD swap lines.  The point of this note is to try and clearly explain the issues in the current dollar shortage and why swap lines by themselves may need to be expanded in terms of definition because the actors are not the same they were in 2008. The USD funding market is 13t dollars according the BIS and it is under huge strain. Today's announcement of the Fed adding nine more CBs to the central bank swap line program is huge and will hopefully alleviate some of the issues below. As a side all the credit for this post goes to Brad Setser and Hyun Song Shin as they set the standard on these dollar issues and how they impact the real economy.

To me, the dollar is the dominant macroeconomic variable. In terms of the financial and real economy, the dollar sets the pace. Right now there is this fascinating duality going on where the world in a binary sense is either extremely long USDs via lopsided international investment positions or extremely short them via credit intensive supply chains. The problem is, the world is not binary, it is incredibly nuanced. And what is making it worse is all these things cracked at once. And under the current reaction, the Fed seems to be reacting to old USD world not the one we live in now.

What has the dollar been saying in its reaction to covid19, and what stage are we in:

First reaction (end of February): USD is a risk currency via a massive negative NIIP positioned. As that flow into assets has roared, more and more of it was unhedged. This contributed to an imperial circle of sort which I have discussed in past posts. So what happened, risk markets started to get hit, new flow into US assets stopped and the dollar got sold.

Second reaction (early March): As the pandemic rolled on, supply chains, which were already stretched and vulnerable, began to break. What do we know about supply chains, they are incredibly credit intensive, especially the longer ones. The other thing we know about them, many of them fund in dollars. As they break, they hoard USD for payment and FX basis blows out and CIP deviation furthers. Which is when the Fed comes in with central bank swap lines.

Third reaction (where are now): Supply chains are breaking, Fed swap lines are not frequent enough in an operational sense and they don't reach far enough in terms of jurisdiction. The dollar shortage is becoming more amplified because key economies are left in the cold. The RBI did two yards of USDINR swaps, and 4b was on the bid. Global corps, especially ones that are part of long supply chains, are stretched and desperate for dollars. To make matters worse, there is a transmission problem in terms the Fed's swap lines. Outside of Japanese financial institutions, most of these players are non bank actors who need USD. This is another example of the Fed's liquidity transmission being broken, the problem is, the 13t dollar funding market is in trouble and it is mostly non banks which makes it harder to get them the support needed.

Before we go into the background, here is the conclusion: The Fed has more to do in terms of FX swap lines. There is a combination of supply chain weakness in EMEs and a misdiagnosis of the problem in terms of who actually uses the FX swap market. Since the crisis, it is mostly non banks hedging UST and US credit exposure. The Fed needs to go to the root of the dollar issue, and unlike 2008, it is no longer getting swap lines to the ECB to fix dollar mismatches in the European banking sector. Asian lifers and pension funds are now the massive players and they need much more directional help.

The point is, until today, the Fed was in no mans land re these CB swap lines. The supply chain pinch is in EM and the financials that use the FX swap market are no longer banks playing US mortgages, its non bank actors like Asian lifers and pensions that FX hedge US credit. Neither are getting the help they need. The transmission of these swap lines needs to be adjusted to further ensure effective policy transmission.

Part 1 of the Fed's problem, the 13t USD funding market

There is an implicit loanable funds framework to this which may not make this so popular, but the basics of it is, USD cross border flows = RoW USD lending to global actors.

The problem global actors have is, this 13t dollar funding market is very fickle and as supply chains have become elongated, they have become more and more credit intensive. This sets up a two part problem for supply chains.

1) The level of the dollar effectively determines how much financing they can do. And as the BIS has explained, this sets off a bit of a doom loop. When there is a credit crunch for these actors because the shadow price of credit is rising, output falls off, which only strengthens the dollar (less economic beta to exports than RoW), and this fire can only be put out by the Fed. 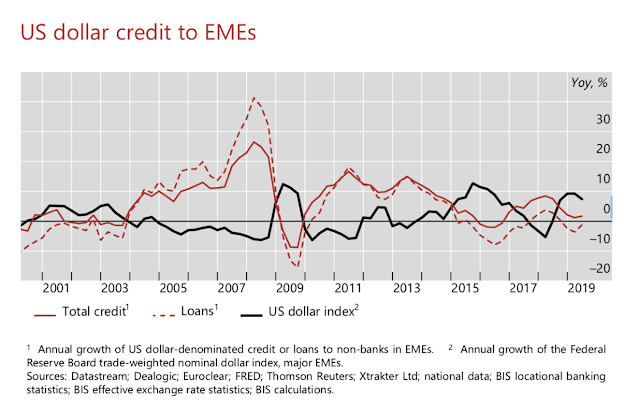 2) When the dollar goes up, financial conditions freeze which only amplifies their need for USD. An example of how bad it is was in India this week. RBI did a 2yard auction in which there was over 4b on the bid. Korea is another example, BoK did a large intervention last night selling USD v KRW and spot rate still went up 2%, only to be arrested by the Fed announcing a swap line to them this morning. These guys are outmatched without Fed/IMF help. 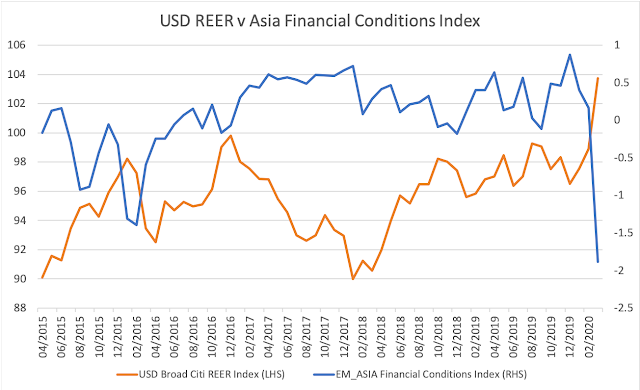 BIS has done amazing work explaining what are the key parts of the 13t USD funding market.

1) The broad dollar effectively shows us dollar funding conditions in the global economy.

2) As Hyun Song Shin has explained, it is also an indicator of bank balance sheet capacity via VaR. Assume the counterfactual to make this point more clear.

"If a global has a diversified portfolio of loans to borrowers around the world, a broad-based depreciation of the dollar results in lower tail risk in the bank credit portfolio and a relaxation of the banks VaR constrain. The result is an expansion in the supply of the dollar credit, through increased leverage."

The point is: if a weakening dollar can expand bank capacity to lend, a stronger dollar does the inverse of that and tightens capacity.

These two things are what connect the level of the dollar to the real economy. As I've said in prior posts, the dollar is a culprit and a reflection about the level of global GDP. On the hand it can impose weakness via shadow credit, and at the same time it can reflect the weakness in global trade and supply chains via a lower beta to global growth. This is the result of a currency that is 50% of global trade invoicing and is only 18% of global GDP. This mismatch between USD representation in terms of US contribution to global GDP and its global usage is only further evidence of how important the Fed is outside of their domestic mandate when the world is in crisis.

Something I have gone into over the past few weeks, is that Asian demand for USD assets has been relentless since the crisis. So big that it has ballooned into $8t international investment position for Asia. The reason has been relatively simple, it is capacity. Asian real money assets are over 10x the size of their domestic IG market with the Japan the extreme at over 20x. Add on the fact that it was positive carry, and the money flew into finance US deficits, especially in the private sector.

In a prior post I focused on the unhedged aspect of this trade, especially as it relates to Taiwanese life insurance companies. And while that is still an issue, when liquidity dries up the issue expands to the hedged aspect, especially as these guys hedge in the front end to own longer term USD assets.

So what happens when there is a crisis, over 11% of demand for US credit goes quiet (outside of stealth GPIF interventions). And this amplifies the liquidity crisis onshore. The problem is, swap lines go to banks, and the biggest players this time around are non bank actors. And these non bank actors are so big that when they have issues, it is felt in illiquidity onshore. For many of these guys, liquidity in the global money markets = capital market liquidity onshore in the US! So the Fed needs to get liquidity to these guys in order to help restore second and third order liquidity. 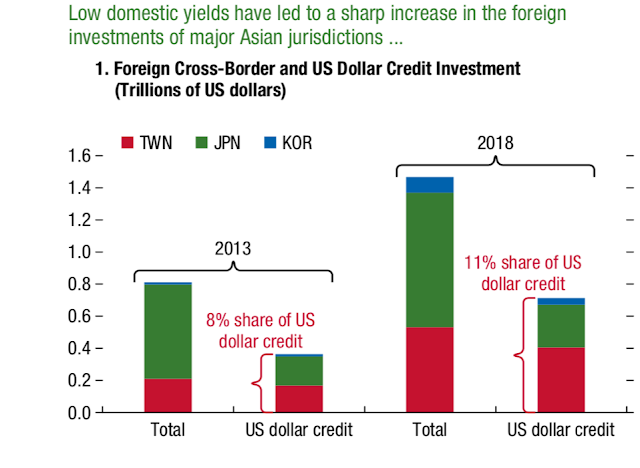 This is the importance of transmission. Dollar auctions are nice, but the non bank actors need access to them. If the Fed can arrest pressure here, that will be job done and the positive ramifications will spillover into things they definitely care about, like liquidity in US credit and treasury market.

This is why the FX basis market and the broad dollar index have shown such a strong correlation. 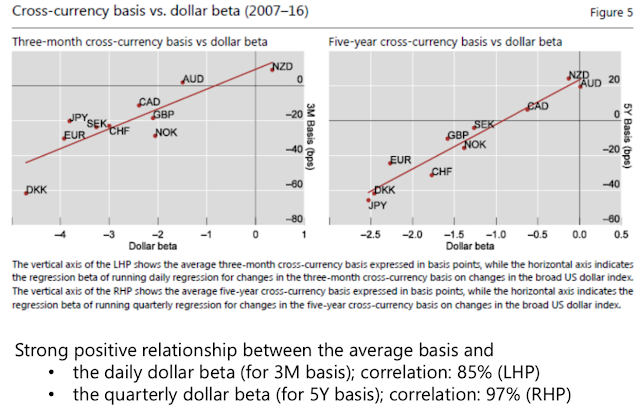 What will the Fed final reaction be, what are the key characteristics of this USD shortage?

I can't underestimate how big today's move is and I applaud the Fed for doing it, it is very necessary. My only fear now is, is not only that this list of 16 CBs is still not long enough, but that the transmission is much more complicated this time around, as supply chains are much more in EMs and the biggest player in FX swap market these days are not banks, its non bank players.

So what are the key characteristics of this shortage

- Within foreign banks, its not homogenous among who funds in USD. Canada and Japan, are not in the same boat as Europe for example.

- The biggest players in the FX swap market are not banks anymore, its non bank actors who use it to hedge longer duration USD exposure.

- Supply chains are breaking and they are more often situated across EM's and EM CBs are being overwhelmed by local demand and massive portfolio outflow. Also EM CBs this time have decided it is better for FX to fall apart than to hike rates.

- Real yields are spiking as they are everywhere

- Oil is making it worse, petro dollar players are in trouble as oil players are all in USD.

Conclusion: The Fed has two key things to do after today's necessary decision.

1) Make sure transmission of swap lines is working, it is harder in this crisis because banks are not the main problem. Non bank actors are that big now, and they can exert pain in liquidity terms in far reaching ways, which is effectively what we've seen.

2) EM's need help now. The Fed and the IMF need go past the 16 CBs currently on USD swap lines. This problem is only amplified as EMs are not hiking rates this time around as they are letting exchange rates be the punching bag.

best way to be in touch is jonturek@gmail.com
Source: jonturek