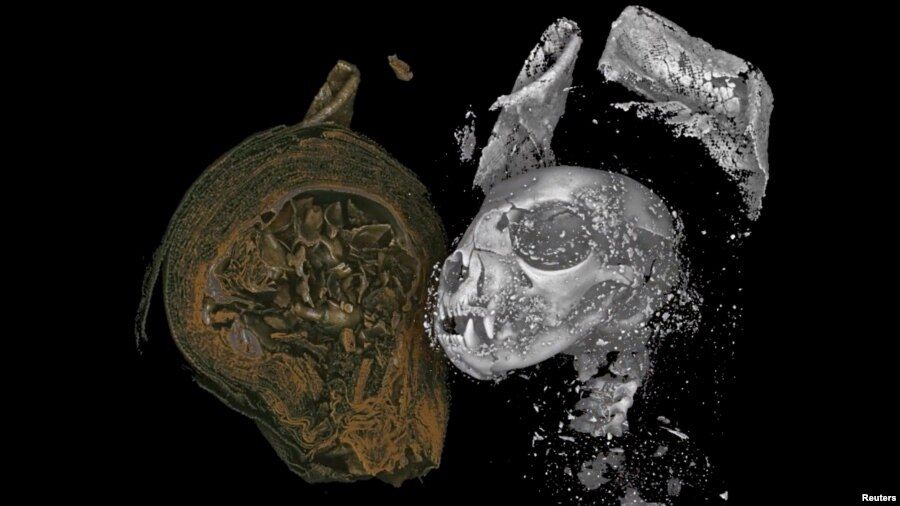 The head of a mummified domestic cat, revealed by X-ray micro CT scanning, is seen in this undated image released on August 20, 2020. (Swansea University/Handout via REUTERS)
Scientists Study Animal Mummies with 3D Technology

Scientists recently used 3-D imaging technology to look inside the mummies of a cat, bird, and snake. The research is helping experts learn more about how ancient Egyptians treated animals.

Researchers said last week that they used a special technique, X-ray micro CT scanning, to look inside the mummies. The scanning process permits the scientists to study the mummies while keeping them whole. The CT scans were much more detailed than medical CT scans.

The researchers published their findings in the journal Scientific Reports.

Ancient Egyptians mummified not only humans but also many animals including cats, dogs, birds, snakes and crocodiles.

Carolyn Graves-Brown, a writer of the study, leads the Egypt Centre at Swansea University in Britain.

She noted that the three mummies were likely made as “votive offerings,” or gifts, to the gods that Egyptians believed in. The dead animals were thought to serve as a link between Egyptian gods and living people.

The mummies had long been in Swansea’s collection. Experts are not sure of their exact age.

The researchers found evidence that the snake, a young Egyptian Cobra, had been denied water while alive. 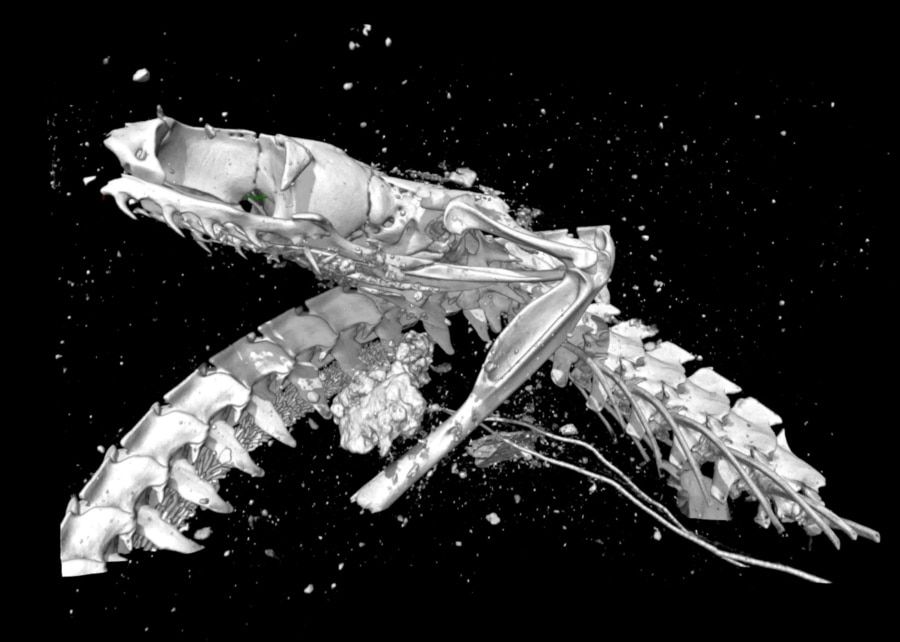 The skull of a mummified Egyptian Cobra, with mouth open, revealed by X-ray micro CT scanning that generates three-dimensional images with a resolution 100 times greater than a medical CT scan, is seen in this undated image released on August 20, 2020. Swansea University/Handout via REUTERS.

It was likely killed by a severe break of its backbone.

The researchers found the snake’s mouth open. It also contained a substance called natron. These findings suggest the snake had been part of an “opening of the mouth” ceremony, said Swansea engineering professor Richard Johnston. Johnston was the lead writer of the report.

Ancient Egyptians believed that the ceremony would permit the mummified subjects to regain their senses in the afterlife.

The cat was probably around 5 months old when it died. Its neck was broken at the time of death or during the mummification process.

The bird appears to be a Eurasian kestrel, of the falcon family.

Ancient Egyptians linked snakes to many of their gods. Cats were often linked with the fertility goddess Bastet. Some birds were linked with sky gods such as Re and Horus.

“Like us, the ancient Egyptians used and abused animals,” Graves-Brown said. “There is evidence from the mummified remains of maltreatment.”

Will Dunham reported on this story for Reuters. John Russell adapted it for Learning English. Caty Weaver was the editor.

3-D – adj.made in a way that causes an image to appear to be three-dimensional

mummy – n. a dead body of a person or animal prepared for burial in the manner of the ancient Egyptians by treating it with oils and wrapping it in strips of cloth

journal – n. a paper that reports on things of special interest to a particular group of people

maltreatment – n. the act of treating (someone) in a rough or cruel way