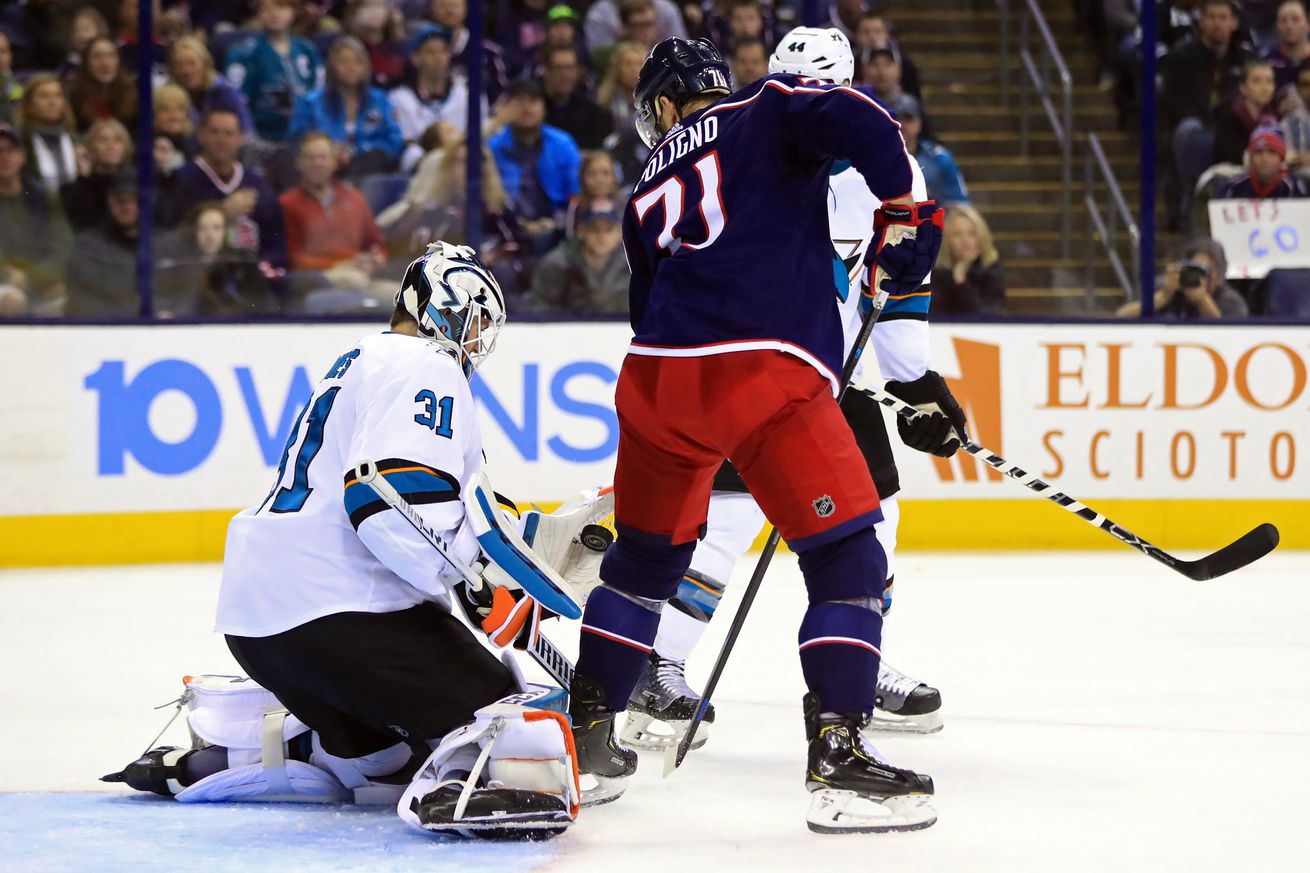 Nothing good happened in this game

Saturday wasn’t for the boys this week, at least not for the San Jose boys. The Sharks lost Erik Karlsson to (presumably) injury, were without Marcus Sorensen for a bit, and otherwise played like a team whose collective body clock was still adjusting to the 2 p.m. Pacific start time.

San Jose took just 43.5 percent of all 5-on-5 shots and generated just 38 percent of all scoring chances after adjusting for the score and venue (Natural Stat Trick). Surprisingly, the team’s first period, in which they gave up the opening tally, was their best. Things went quickly downhill from there in a contest where Columbus controlled the neutral zone and San Jose couldn’t get stick to puck as cleanly and as often as it would have liked.

Trouble for teal compounded late in the second period after onlookers observed Erik Karlsson had departed for the dressing room, likely as a result of an injury aggravation. Bad turned worse after the game, when beat writer Paul Gackle confirmed Karlsson re-tweaked his groin injury, and that his timetable for return is unknown at this point.

Setting aside the horrible implications of missing Erik Karlsson for the team’s final 20 games for a moment, we can instead focus on today’s frustrating 60 minutes. Not only did team teal fail to get anything going at even strength, but the outstanding Columbus penalty kill made null and void any San Jose attempt at revving its power play engine. By the end of the game, Sharks’ coach Pete DeBoer had Marcus Sorensen on the man advantage, likely as a ruse to facilitate some sort of zone entry. It was no matter. The Sharks took just three unblocked shots with an extra skater.

If there is a positive to recognize in this game it’s that the Erik Karlsson — Marc-Edouard Vlasic pair played solidly togehter before Karlsson’s injury. The two helped the team take 55 percent of all score- and venue-adjusted shots at 5-on-5. Skating often with them, the new fourth line also allowed the team to take most of the shots and generate most of the scoring chances.

As for Martin Jones, well, we don’t even need to glance at goals-saved-above-average metrics to know that he let two tallies trickle through his legs today. San Jose’s goaltending remains (outside of Erik Karlsson’s injury recovery) the team’s greatest weakness. If they are to enjoy a successful spring, something between the pipes will have to change.

Hello and welcome to today’s liveblog. We are following along as the San Jose Sharks skate in an afternoon adventure against the Columbus Blue Jackets. Matt Duchene makes his home debut, and the Sharks must fend off an early start time.

16:42: What a wild first few minutes. The first stoppage in play happens more than five minutes into the game, and, while no team has many shots on goal, both have a few opportunities near the net.

13:00: After a pretty even back-and-forth over the game’s first five minutes, it’s been all Columbus, as they say, since then.

11:12: Joonas Donskoi is on the creating end of two chances, but nothing going. Columbus takes an icing the other way.

11:00: Brent Burns slides too far over into his zone, loses his man behind him, and can only watch helplessly as Boone Jenner scores the game’s first goal.

7:38: Donskoi is having himself, by the eye test at least, a game today. Circling the net, he generates another chance for his teammates, but Sergei Bobrovsky up to the task.

00:00: A surprising 9-7 shot-on-goal counter is on the scoreboard after the first period. The Sharks were lucky to be down just one goal to none after that frame, as the team took most of the shots in the first but allowed the bulk of scoring chances (Natural Stat Trick).

San Jose’s third line struggled, helping the Sharks take a much lower percentage of shots relative to the rest of the team. Joe Pavelski, Timo Meier, and Logan Couture did well in corralling more shots relative to the team, and the Hertl line impressed in the scoring chances column. If I were a betting man, I’d put some serious bitcoin down on Donskoi tying things up during the next 20.

19:01: The Sharks get caught flat in the neutral zone, Artemi Panarin toe drags Braun, and Duchene cleans up a rebound to put the Jackets ahead by two. Not pretty all around by San Jose.

16:50: Timo Meier records the team’s first shot on goal in the second period, but it was a backhander into Bobrovsky’s chest, though he may have been better served looking for Pavelski on the far post.

15:36: Marcus Sorensen goes to the box for interference, but it’s a tough call. Sorensen skated past the defender and the defender’s stick falls out of his hands. Generally speaking, San Jose looks like they’re having trouble in transition. They are exiting the zone with lots of hopeful hail mary-type passes into the neutral zone and are also having trouble entering Columbus’ zone cleanly.

14:15: Tomas Hertl has an opportunity short handed, but can’t squeeze it by the Jackets’ netminder, who is having a bit of a game.

9:40: More lifting the puck up and out of the zone after a long slog of a defensive shift. Down at the other end of the ice, Meier comes close to getting Pavelski, who eventually draws a penalty, set up in front of the net.

6:17: San Jose’s fourth line comes up with what has been perhaps the team’s best chance of the middle frame, batting Bobrovsky’s leg pads in search of enough oomph on a shot to sneak one into the back of the net.

0.30.9: Micheal Haley decides to run David Savard while the puck is in the offensive zone, knocking the Jackets’ defenseman into his goalie and bumping the net off its moorings in the process. The Jackets capitalize on the ensuring power play when a puck slithers between Jones’ legs and Duchene or Cam Atkinson usher the puck the rest of the way across the goal line.

San Jose just can’t seem to get anything clean going through the neutral zone, opting to flip the puck up and out of their zone and/or scrambling to enter the offensive zone with control. The three-goal deficit will be difficult to overcome unless San Jose gets some bounces going in their direction in the third period.

15:04: Marcus Sorensen now injured, as well, after taking a puck to the face. San Jose continues to struggle just about everywhere. Off the glass and out when they exit their zone and little going on the few opportunities they have to enter the offensive zone.

13:57: Columbus shows their strong structure as they turn a Sharks entry into a two-on-on the other direction. Vlasic does all he can to thwart the shot, getting his stick on Pierre-Luc Dubois’, but the forward manages to slide the whiffed shot thought Jones’ five hole.

6:29: Dell makes a nice save on another odd-man rush. I’d say more, but that’s the best thing the Sharks have done all period and I have some bathroom tile grout to clean with a toothbrush.

I would’ve updated again, but I didn’t watch the end of the game because I was busy pouring bleach into my eyes.

The National Hockey League (NHL) trade deadline is on Monday, which means we’re in for an exciting storm of general managers (GMs) swapping fifth-round picks for Jack Johnsons and 25-year-old “prospects.” Fun. Before we get ahead of ourselves, an actual big-name trade happened just yesterday. The Ottawa Senators sent center Matt Duchene to the Columbus Blue Jackets for a couple of prospects and two picks. That wouldn’t normally be pertinent to a game preview, but here the Sharks are, in Columbus, ready to lay down the law against none other than newly minted Blue Jacket Duchene.

Duchene is an important addition. The Blue Jackets’ 5-on-5 expected goal has been trending up — way up — in their last five or so games. Duchene, this season, has had a positive, if not otherworldly impact on even-strength expected goals (Evolving Hockey) this season. Duchene certainly represents an improvement over Columbus’ other depth centers, Boone Jenner and Alexander Wennberg (who was a healthy scratch last night against Ottawa) in that facet of the game. The Jackets’ new pivot is also an excellent neutral zone contributor, making the prospect of Artemi Panarin and Cam Atkinson skating on his wings even more terrifying.

Jackets’ coach John Tortorella has opted to split up the big Seth Jones and Zach Werenski defense pair and doesn’t seem to employ much line-matching at home lately. We can only surmise, then, that Duchene and company will see plenty of Logan Couture and that Pierre-Luc Dubois will face off against Tomas Hertl’s trio of marauders. This should leave Joe Thornton with plenty of time against Boone Jenner, who offers offense by the boatload but for whom defense doesn’t seem obligatory.

Finally, Joonas Korpisalo should man the nets for Columbus after Sergei Bobrovsky did so last night. Korpisalo ranks 48th of 50 goalies who have played at least 20 games this season, when measuring by goals allowed relative to expected on unblocked shots (MoneyPuck). He ranks 70th out of 77 goalies who have faced at least 100 unblocked shots this season (Evolving Wild). San Jose should be able to capitalize on the chances they create.

San Jose lost 4-1 at home to the Blue Jackets in early November, just after the initial splitting of Erik Karlsson and Marc-Edouard Vlasic.

Puck drop is at 2 p.m. Pacific/5 p.m. Eastern from Nationwide Arena. The game will be broadcast on NBC Sports California in the Bay Area and Fox Sports Ohio in the Columbus area. Radio call will be on 98.5 KFOX or through the Sharks app.