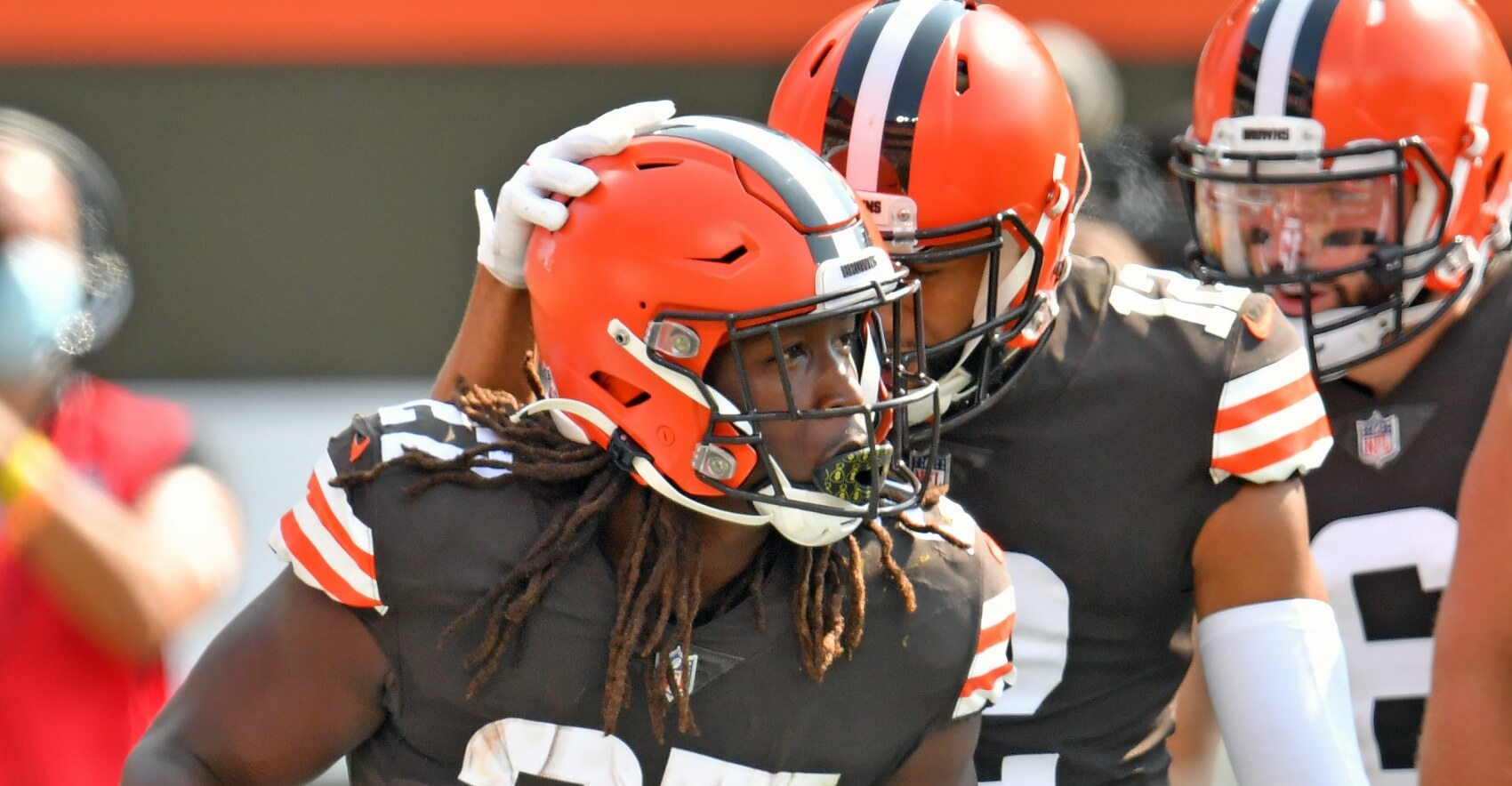 Welcome to the Fantasy Football Day Trader, where the writers at The Fantasy Footballers team up to present our favorite players to invest in as well as those to fade.  Fantasy football is a lot like the stock market, and this article series is meant to assist you with your investment portfolio.  We’re here to present our fantasy opinions for your consideration, and I can tell you firsthand that we preach what we praise.  This article series will present fantasy players that we’re looking to move and the price tag that we think is fair.  You should always try to assess your trade partner’s valuation of players before jumping to a price tag that you assume is fair.  If you’re new to fantasy or if you’d like a refresher on general trade strategy, we have an evergreen article from last year to help: The Art of the Fantasy Football Trade.

We’re more than halfway through the season, and there are only four or five matchups left until fantasy playoffs depending on your league structure.  At this point in the season, you should have a good feel for where your fantasy team is and what you need to do in order to make the playoffs.  The Fantasy Footballers aired the Playoff Primer podcast on Wednesday 11/11, and our writer Peter Chung published the recap article: Best & Worst Playoff Schedules.  My advice entering Week 10: Keep it Simple Stupid.  Don’t get cute, stick to the plan.  You don’t have to force trades, especially if you have a great record and a strong fantasy team.  That being said, I’m all about making risky trades if you’re an underdog looking to claw your way into the playoffs.

Mark Andrews (Jeff Greenwood – @TheFantasyEng
The tight end position is gross for fantasy.  The healthy players on top are Travis Kelce and Darren Waller.  You could argue T.J. Hockenson has been great, especially of late.  And of course, Mark Andrews has been up and down.  That’s it…that’s the list.  After that, there is a hoard of players that have been good in stretches but unreliable.  But don’t forget that Mark Andrews was viewed as an elite fantasy tight end entering the season, and there’s no reason to question his talent.  The issue for fantasy is that the Ravens have had a low volume passing offense this season.  So why do I want to trade for Andrews?  He’s affordable, those who drafted him are frustrated, and the targets are there.  Also, he’s played against really tough defenses in terms of fantasy points given up to the tight end position.  The last time he had a top-15 fantasy matchup was Week 2!  WEEK 2 PEOPLE, give the guy a break!  It’s important to note that Andrews has tough matchups in two of the next three weeks, but his schedule is great outside of that.  Andrews has the upside to be a touchdown machine, and his QB has the best red zone passer rating among all QB’s this season (Lamark Jackson | 129.3) – credit to our own Andy Holloway for that stat.  Andrews is a player I want on my fantasy teams if I don’t have Kelce, Waller, or Hockenson.  Price Tag: back-end WR2/RB2 | Risk Rating: 4 (medium-high)

Derrick Henry (Peter Chung – @FF_Hypeman)
Taken from the upcoming “Playoff Primer” article: Best & Worst Playoff Schedules
Do you know who has an extraordinary playoff schedule? None other than the stiff-arm yeti himself, Derrick Henry. Though he’s currently in the midst of a brutal three-game slate, he will finish it off with the BEST projected playoff schedule. After facing Jacksonville’s porous defense in the first week of playoffs, he gets to close the fantasy season against the two EASIEST matchups for opposing RBs: the Lions and Packers. Recall that these were the two teams that Dalvin Cook just crushed for repeat #1 finishes. And if we want to play the narrative game (which I always do), take a look at your calendar because winter is coming, which just happens to be the seasonal change that Henry apparently needs to fully unleash as a league winning RB1. Henry should be one of the most coveted trade targets for those who can coast through the remaining regular-season games, but it definitely won’t be cheap. Price Tag: High RB1 or Low RB1+WR1 | Risk Rating: 3 (medium)

Kareem Hunt (Aaron Larson – @aalarson)
Hunt managers are likely ready to move on. He’s finished outside of the top 24 running backs in two of his last three games and was saddled on the bench during his bye last week. Now they’re likely getting even more concerned regarding Nick Chubb’s impending return. The thing is…Hunt has actually been better when teaming up with Chubb in the backfield. He averaged 16.4 fantasy points in the four games with Chubb and 12.4 in the four without him. His fantasy playoff schedule also sets up well, with favorable matchups against the New York duo of the Giants and Jets in Weeks 15 and 16. Price Tag: Low-end WR1 | Risk Rating: 3 (medium)

Clyde Edwards-Helaire (Jeff Greenwood – @TheFantasyEng)
CEH is RB18 on a points-per-game basis so far this season.  He was averaging 21 touches per game before Le’Veon Bell joined the roster.  Since that time (Week 7), CEH is averaging 9 touches per game and his fantasy production has been boosted by 2 touchdowns since that time.  Kansas City’s backfield is a timeshare, and for good reason.  The Chiefs are the best NFL team by far, and they’re winning with a limited running game.  Furthermore, Le’Veon Bell isn’t as washed as everyone thinks.  I do think CEH sees a bit more touches moving forward, but he’s not the top-5 RB that you drafted.  I guarantee you that there are contenders in your league who are desperate for running backs, and I think you can gain an edge by trading CEH – the perceived alpha RB on the best team in football.  CEH is still incredibly valuable in dynasty and keeper leagues, and I wouldn’t be desperate to move him in typical redraft leagues… But I’d be looking to move him for fair value.  Price Tag: Top-15 RB | Risk Rating: 4 (medium-high)

Dalvin Cook (Peter Chung – @FF_Hypeman)
Taken from the upcoming “Playoff Primer” article: Best & Worst Playoff Schedules
Dalvin Cook has been on fire, notching back-to-back RB1 performances against the Packers and Lions and looking outstanding while doing it. While he’s obviously a phenomenal player on a team that clearly wants to establish the run, he’s also benefited from one of the best schedules thus far. His only difficult matchup was in Week 2 against the Colts’ ironclad defense, where Cook saved his otherwise pedestrian day with a TD. This was also his worst fantasy performance, though he still finished as the week’s RB17, a credit to his talents. But take a look at his playoff schedule. Yikes. Cook will go from one of the easiest first half’s to the MOST difficult one when it truly counts. He’ll have to face the Buccaneers and Bears — who have bottled up the likes of Aaron Jones, Josh Jacobs, and Derrick Henry — before contending against the Saints’ fifth-ranked defense. But still, Cook is a bona fide stud who should not be traded away unless you can get hold of another top-end RB with a very favorable championship schedule like Derrick Henry. And while the ‘Ballers advise against trading away Cook for Henry, I’m in favor of it, but the risks cannot be ignored. Price Tag: High RB1 or Mid RB1+WR1 | Risk Rating: 5 (very high risk)

Adam Thielen (Aaron Larson – @aalarson)
Thielen has finished outside the top 60 fantasy wide receivers in back to back weeks, but hopefully, his name value and the fact that he still sits as the WR8 on the season will keep his value higher than it should be. His rest of season schedule is brutal as Minnesota faces the third toughest wide receiver schedule for the remainder of the season. He’s also historically fallen off a cliff down the home stretch in recent years. He’s only finished inside the top-24 fantasy wideouts two times in eleven games over the second halves of the past two seasons. Get what you can before it’s too late.  Price Tag: Mid-range RB2 | Risk Rating: 3 (medium)