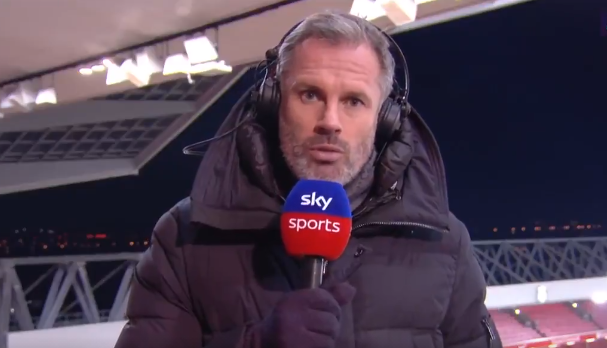 Jamie Carragher revealed his concern over five Liverpool players after the shock defeat to Burnley, claiming Mohamed Salah, Roberto Firmino, Sadio Mane, Andy Robertson and Trent Alexander-Arnold are all ‘nowhere near their best’.

The Premier League champions suffered a 1-0 defeat on Thursday night as their 68-game unbeaten home run was ended by Sean Dyche’s Burnley.

Liverpool had the majority of the possession and created more chances than Burnley but were unable to break their resistance and Ashley Barnes scored a late penalty to seal a surprising win at Anfield.

The defeat means Liverpool remain six points behind Premier League leaders Manchester United, having failed to win 10 of their 19 matches this season.

Reacting to the loss, Carragher told Sky Sports: ‘I can’t remember a time when this Liverpool team have been so out of form. The front three and the full-backs – all five of them – don’t feel anywhere near their best.

‘It’s not just that they’re not scoring, it’s the general play as well. You saw with Salah, three or four times he just ran into defenders.

‘Liverpool supporters will be massively frustrated. This team has brought the title back but the best Liverpool teams have brought that standard year in year out.’

Carragher added: ‘Jurgen Klopp has defended the players but at this moment it looks like the title is slipping away, it will be really difficult.

‘They’ve been so poor, it’s hard to believe what has happened to Liverpool. So many players out of form at the same time.’

Liverpool midfielder Geordinio Wijnaldum, meanwhile, said: ‘A really tough one. Before the game we had good intentions to play against Burnley.

‘We created enough to score a goal but unfortunately we couldn’t. We were not sharp enough and they got the penalty.’

Liverpool face Manchester United in the FA Cup this weekend before returning to Premier League action next Thursday against Jose Mourinho’s Tottenham.