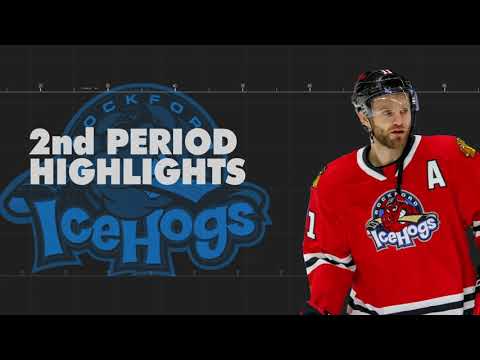 The American Hockey League’s (AHL) season is in full swing and every night seems packed with first professional goals. That is exactly what we got in Rockford as a Carolina Hurricanes and Chicago Blackhawks’ prospect each lit the lamp for the first time. Also, an Ottawa Senators’ prospect is showing off his skills in the AHL. Finally, as the Western Hockey League’s (WHL) U.S. Division is getting set to begin, a pair of Montreal Canadiens draft picks are named captain.

The Rockford IceHogs and Chicago Wolves met for the third time already this season and a pair of recent draft picks netted their first professional goals.

Suzuki is one of many players who normally wouldn’t be allowed to play in the AHL but is getting some valuable experience because of the delays in both the WHL and Ontario Hockey League (OHL). He doubled the Wolves’ first-period lead on Thursday night by finishing off this play.

Anthony Richard got to the loose puck in the slot and put it to the area of the ice where he knew Suzuki would be. From there, the 19-year-old winger had a wide-open cage to fire into. Ryan, the younger brother of Canadiens’ forward Nick Suzuki, was drafted by the Hurricanes in the first round (28th overall) of the 2019 NHL Entry Draft. He had 18 goals and 58 points in 44 OHL games last season, split between the Barrie Colts and Saginaw Spirit. If and when the OHL returns to play, he will have to head back to Saginaw or be added to the NHL roster.

On the other side of the ice, rookie defenseman Phillips scored his first pro goal in the third period. This was Rockford’s second goal in 19 seconds to cut Chicago’s lead down to 3-2, but they were unable to get the equalizer.

Phillips, 19, was drafted by the Blackhawks in the fifth round (141st overall) in last October’s draft. Many experts and draft boards had him going much earlier than this, some even had him being a third-round pick. He is currently on an amateur tryout contract (ATO) and will return to the Sudbury Wolves upon the start of an OHL season.

They had to wait a week longer than the rest of the league, but the AHL’s Canadian Division got going this week. The Belleville Senators took down the Laval Rocket (Canadiens) 4-1 on Tuesday night.

Abramov scored in the third period to break a 1-1 with the eventual game-winning goal to finish off a sequence where the Senators just owned the offensive zone. This was not a power-play opportunity for Belleville, just pure 5v5 domination.

This was Abramov’s first AHL goal in three games this season. He had 18 goals and 41 points for Belleville before the 2019-20 season was wiped out. He was originally drafted by the Columbus Blue Jackets in the third round (65th overall) of the 2016 NHL Entry Draft after scoring 38 goals and 93 points, in 63 games, during his Quebec Major Junior Hockey League rookie season with the Gatineau Olympiques. He was acquired by the Senators in the 2019 trade that sent Matt Duchene to Columbus.

There is finally going to be some hockey coming up in the WHL. The five teams from the U.S. division will drop the puck on their 2020-21 season beginning on March 19. The Everett Silvertips, Portland Winterhawks, Seattle Thunderbirds, Spokane Chiefs, and Tri-City Americans will play exclusively against each other. There still hasn’t been an official start date for the other 17 WHL teams who play in Canada.

The Silvertips are already making preparations for the new season by naming co-captains in Fairbrother and Fonstad.

“Gianni and Cole have demonstrated a tremendous sense of work ethic and abilities that validate their success in the Western Hockey League,” said Silvertips head coach Dennis Williams. “As they operate as an extension of our coaching staff, we’re confident both will uphold the core values of our group. Their unique qualities complement each other, they provide continuity from last year’s leadership group and make a great fit with mentoring our returning players and incoming first-year Silvertips.”