Mexico City Then and Now: A Missionary Discusses the Film ‘Roma’

Editor’s Note: When Alfonso Cuarón’s film Roma premiered at the Cannes Film festival, it won the prized Golden Lion award. Since then it was nominated for ten Oscars, including Best Director and Best Picture, and took home top honors for Best Director, Best Foreign Language Film, and Best Cinematography. The film is named for a neighborhood in Mexico City where the director spent his childhood. We asked Rick Martinez, an IMB missionary and the leader of the Gateway Mexico City Team, what the film reveals about Mexican culture. He also suggests ways to pray and opportunities for service in Mexico City. Our discussion includes spoilers.

Daily life in the historic district of Coyoacán in Mexico City. The city draws a steady stream of internationals coming for business and tourism. All photos by Hugh Johnson.

Roma is set in Mexico City in the 1970s. How has the city changed since then?

Rick: The main change is that the population of Mexico City has doubled since 1970—from ten million to over twenty million today.

But even though the city has grown, Mexico City is the same yesterday, today, and forever barring a mighty move of the Holy Spirit. Alfonso Cuarón captured the beauty of the city without idealizing it. The movie does not mask the societal problems that plague Mexico City. The main social problems the film reveals exist today but in greater numbers. They are problems of the heart caused by innate sinfulness. And no amount of technological progress or modernity can help that soul-stained reality. The ultra-modern Santa Fe district of Mexico City is home to many foreign companies and expatriate workers.

What are some of the social problems highlighted in the film that continue to be relevant?

Rick: There were two issues in the film that stood out to me that are still relevant today. First, the disparity between the rich and the poor and, second, fractured families. The economic gap between rich and poor in Mexico City is enormous. Mexico City has millions of people that live in poverty. Government estimates suggest 42 percent of Mexicans live below the national poverty line. The legal daily minimum wage in Mexico City is equivalent to about five dollars—not per hour, but per day. This causes many to resort to making a living in the informal economy. Thousands of poor, mostly indigenous peoples, eke out a living selling candies or knickknacks on the streets at intersections and on sidewalks. This informal economy was depicted very well in Roma. Children play in the streets of the historic district of Coyoacán in Mexico City.

Colonias (neighborhoods) like Roma are upper-middle class and enjoy the benefits of a society where residents can employ cooks, maids, and nannies cheaply. Most of these domestic workers are indigenous peoples. They travel to work from the outskirts of Mexico City, which is populated by millions of migrants from rural areas of the country.

The upper-class is dominated by Mexicans of European descent who are white in complexion, while most domestic workers are indigenous with darker skin. These contrasts are shown in several scenes. In one scene where elementary school is being let out, every child is white and is being picked up by indigenous nannies.

“Mexico City is the same yesterday, today, and forever barring a mighty move of the Holy Spirit.”

I also mentioned the problem of fractured families. Two of the main characters, Sofia and Cleo, are betrayed by the men they love most. Sofia’s husband leaves her for another woman and Cleo’s boyfriend refuses to take responsibility for the child he fathered. The movie shows how betrayal and abandonment is not a respecter of persons—both rich and poor alike are victims. Unfortunately, it is not uncommon for men in Mexico to have multiple families. Monogamy is seen as weak and unmanly. Machismo deceives men into thinking they can prove their manhood by having multiple women. Men congregate in a historic neighborhood in Mexico City to compete in chess.

The fracturing of marriages in Mexican culture explains why mothers and grandmothers are revered. They are the constant of the family. A mother would never abandon her children. Religiously, this partially explains the extreme devotion Mexicans have to the Virgin Mary, or more specifically, the apparition of Mary known as the Virgin of Guadalupe. They trust Mary to always be faithful and present. Mexicans are often much more devoted to Mary than to Jesus. This makes conversion hard for many because they believe turning their backs on Mary as the object of their devotion would be the ultimate betrayal.

The Virgin Mary is revered in Mexican culture. Her icon occupies a place of honor in many homes, including this one in Mexico City.

Did you see any positive aspects in the film that reflect what you’ve come to appreciate about Mexican culture?

Rick: One of the great things about the movie that is still true today is how love is able to overcome ethnic and economic barriers. This is shown, interestingly, through tragedy. One senses the genuine care and affection between Sofia and Cleo, who were both abandoned by men who should have cared for them. Sofia shows empathy and cares for Cleo throughout her pregnancy. Through painful circumstances, they forge an enduring bond. The children of the household love Cleo. Every night she tucks them into bed and tenderly sings them lullabies in her native tongue. The director is keen on showing the smiles of satisfaction, peace, and security in the home.

A dramatic scene at a country house demonstrates unity in the midst of tragedy. One night there is an extravagant party in the main house for the wealthy families while the indigenous people who take care of the land enjoy their own party in a rundown space downstairs. This segregation continues until a fire breaks out in the surrounding fields. As calls are made for help, the director deliberately shows (in slow motion) how everyone comes together—rich and poor, white and brown, young and old—to put out the fire.

This theme was put on full display in the aftermath of an earthquake that struck central Mexico on September 19, 2017. Approximately 230 people were killed in Mexico City when many buildings and houses collapsed. Grief and fear struck everyone alike. Different ethnic groups and classes came together to help in the relief efforts, removing rubble and rescuing the wounded. Others provided food and water. Many gave money. For a few weeks, Mexico City was unified through tragedy and the unity was beautiful to see. 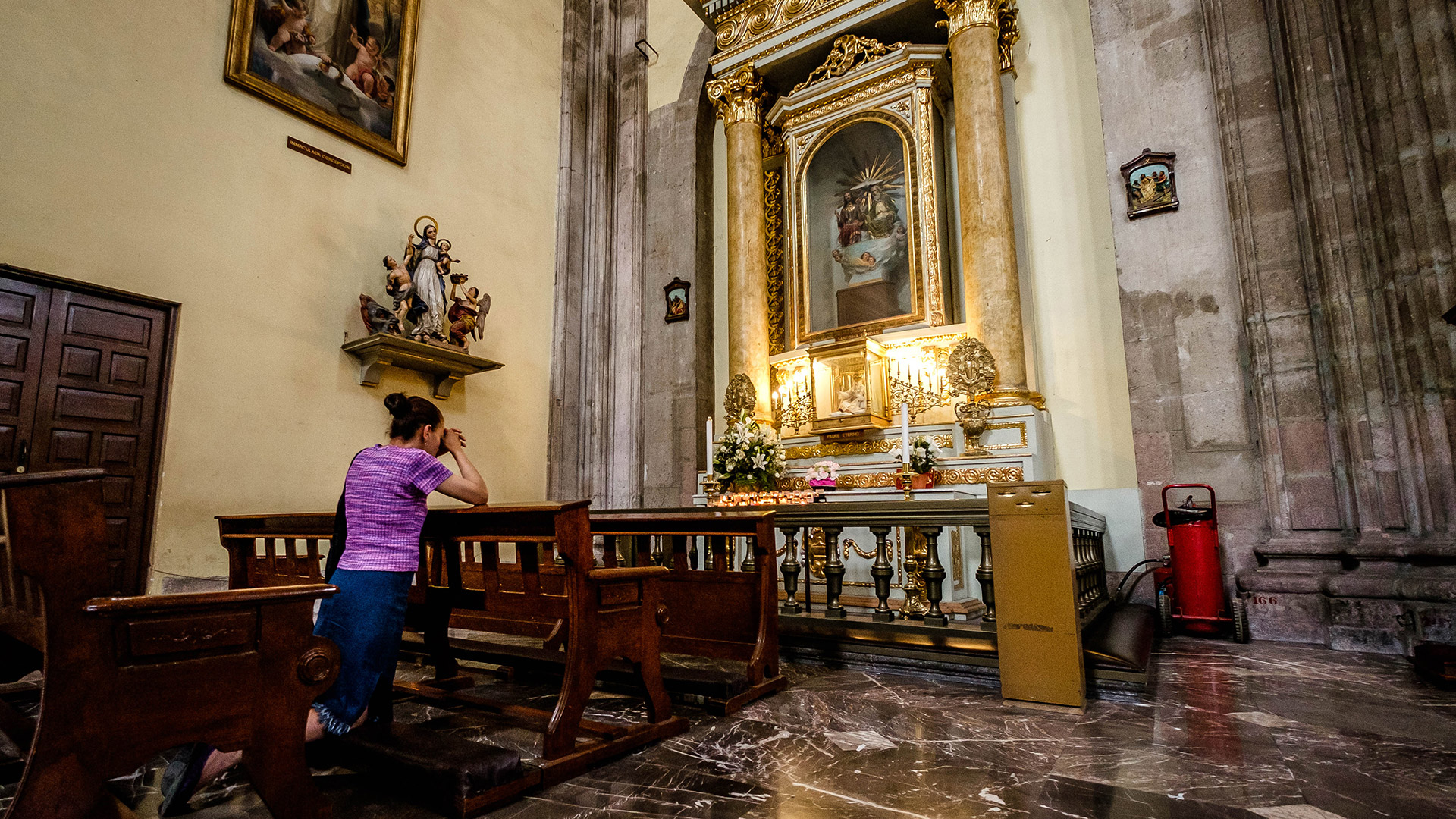 A woman prays in a Catholic cathedral in Mexico City.

How can we pray for Mexico City and the people who live there?

Rick: Let’s pray based on the themes above.

Are there any specific opportunities for people to engage Mexico City?

Rick: Yes, absolutely. Short-term, we’re looking for prayer walking teams for the areas of Roma, Condesa, and Polanco to pray for the thousands of Jewish Mexicans and others in the upper-class that live in the city who do not yet know Christ as their Savior.

Long-term we currently have three career church planting positions available that will reach out to the various ethnic peoples within Mexico City. Come join the work God is doing in this beautiful city.

Note: Roma is rated R and is not appropriate for children. It includes graphic nudity, strong language, and scenes of political violence.

The post Mexico City Then and Now: A Missionary Discusses the Film ‘Roma’ appeared first on International Mission Board.

Mexico City Then and Now: A Missionary Discusses the Film ‘Roma’