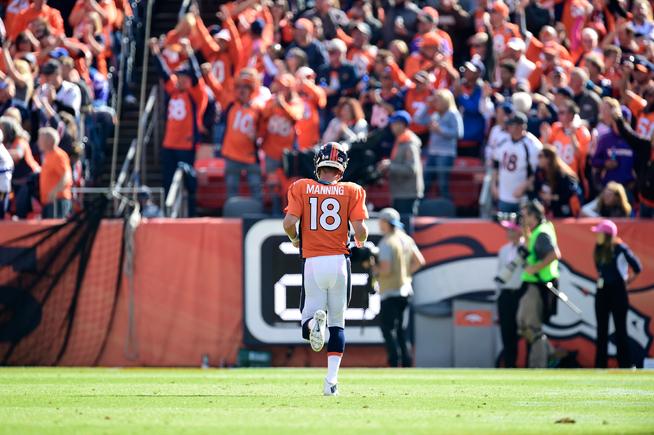 One by one, they walked out of the Empower Field tunnel on Jan. 22 to surprise Peyton Manning.

His college coach and play-caller at Tennessee — Phillip Fulmer and David Cutcliffe.

His second and third coaches with the Indianapolis Colts — Tony Dungy and Jim Caldwell.

The man who was synonymous with maniacal preparation during an 18-year pro career with Indianapolis and the Broncos was taken aback. Fulmer, Cutcliffe, Dungy, Caldwell and Kubiak traveled to Denver to provide memories of coaching Manning, which served as the opening act for the unsurprising news.

“We have another surprise for you,” Dungy told Manning.

At that point, Pro Football Hall of Fame president/CEO David Baker walked out of the stadium’s mid-field tunnel to inform Manning he was a member of the Class of 2021.

“In about a four-minute span, I kind of went through 30 years of football, from my first year playing high school ball in 1990 and everybody who’s had an impact on my football life,” Manning said of the stadium gathering.

Manning said his father, Archie, will present him on Induction Night this summer.

“He has had the greatest football influence on me of anyone,” he said.

Manning joins John Elway (2004) as the second Broncos quarterback to reach the Hall, the third elected in his first year of eligibility (Elway and Bailey) and ninth player in franchise history who spent a significant portion of their career with the team.

Manning and Atwater (last year’s induction ceremony was canceled) will be enshrined Aug. 8.

“Neat way” to be informed

The coronavirus pandemic prevented the traditional wait-in-their-hotel-room-for-a-knock-from-Baker, but the Hall still wanted to have an in-person notification for inductees. Ahead of the Jan. 19 vote, the Hall reached out to Broncos chief communications officer Patrick Smyth for assistance organizing an unveiling for Manning.

Smyth’s first text was to Manning’s wife, Ashley. The Hall’s initial idea was to surprise Peyton at his home and possibly fly in Archie from New Orleans. Ashley, though, stressed the best plan was to incorporate Peyton’s former coaches.

The wheels quickly went into motion.

The Broncos contacted John Fox, who planned to attend but was unable to because of a health issue. They asked Tennessee (Fulmer), Duke (Cutcliffe), the Colts (Dungy and Caldwell), and the Tampa Bay Buccaneers (Manning’s long-time offensive coordinator with the Colts, Tom Moore, is a Bucs assistant coaching in the Super Bowl) for assistance.

Colts owner Jim Irsay provided his private jet to pick up Dungy (Tampa) and Caldwell (Charlotte). The athletic programs at Tennessee (Fulmer) and Duke (Cutcliffe) did the same. The Broncos flew Kubiak via private jet from the Houston area.

Manning had an 11 a.m. appointment at a local television station to do voice-over work. He was also told he needed to recite some on-camera lines at Mile High at noon.

“I’m not going to lie, my antenna was up a little bit,” he said.

Once at the stadium, Manning stood in the south end zone facing midfield.

“What are you looking at?” he asked the cameraman, who was looking beyond Manning.

But there was more.

The group left the stadium for a late lunch in a private room at former Broncos coach Mike Shanahan’s restaurant.

“ I have to tell you, it was just a neat way (to be informed),” Manning said. “To me, it’s a better way of letting people know as opposed to waiting for a knock on a hotel door.

“Ashley audibled to make this a real football moment.”

Out the entire 2011 season with a neck injury, Manning was released by Indianapolis and signed a five-year, $96 million contract with the Broncos 13 days later.

His final game was five years ago Sunday — the Broncos’ Super Bowl win over Carolina.

But there was adversity … team and individual.

“I wear my Super Bowl rings from Denver and Indianapolis and I just have memories in my mind and in my heart of what those teams went through,” Manning said when asked about the ’16 team. “Indianapolis, we were 14-2 and had a devastating loss to Pittsburgh (in the January ’06 playoffs) at home and (was) the kind of game that can make you or break you. It made us. We stuck together, kept pushing through and won it the next year.

“We had some chances in Denver the first couple years and disappointing losses in the Super Bowl (to Seattle) and in the playoffs to Baltimore (after the ’12 season) and Indianapolis (after the ’14 season). You just keep plugging along.”

In ’16, Manning fought a foot injury and had at least one interception in the first eight games; in the ninth, he threw four interceptions against Kansas City and was replaced by Brock Osweiler. Manning was inactive for six games and was the Week 17 backup when he took over for Osweiler in the second half against San Diego then started each playoff game en route to the Super Bowl championship.

“No doubt about it, tremendous pride to be a part of that team,” Manning said. “It was great talking to Coach Kubiak about that team and when I talked to Von, Emmanuel and Demaryius, you have that bond.”

Playing with teammates like Miller, Sanders and Thomas, working with coaches like Mora, Dungy and Kubiak and experiencing so many golden moments like two Super Bowls and four MVPs, Manning’s speech, through his natural story-telling skills, in Canton will be entertaining. But it won’t be lengthy.

“Nobody has remembered to be short (with their speech) in the history of it,” Manning joked. “Mine will be. I know I appreciate brevity. … I’m a little more of the style of what I’ve been doing these past couple days — calling people and thanking them for what they did for me and my football journey. That’s kind of my early approach.”

The calls will continue until the induction. High school buddies. Behind-the-scenes team employees in the video, training and equipment departments. Coaches. Teammates.

“What this has meant to me is a chance to reflect, a chance to let people know how grateful I’ve been for their help because it’s certainly been a fun ride,” Manning said. “But it’s been fun because I’ve had so many people to share it with.”