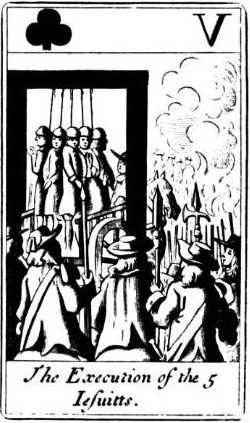 Five Jesuits were hanged at Tyburn on this date in 1679, in the largest single mass execution of England’s “Popish Plot” hysteria.

This club of five is the five of clubs in a Popish Plot-themed deck of cards. Here are more images from the same series.

During this 1678-1681 outbreak of anti-Catholic paranoia, according to the French priest Claude La Colombiere, “the name of the Jesuit [became] hated above all else, even by priests both secular and regular, and by the Catholic laity as well, because it is said that the Jesuits have caused this raging storm, which is likely to overthrow the whole Catholic religion.”

This clique of course had a long tradition on the Isles of positioning as treasonable foreign agents dating to the Elizabethan age.

The five Jesuits of concern to us today, Thomas White aka Thomas Whitebread, John Fenwick, William Harcourt aka William Harrison, John Gavan, and Anthony Turner, were accused by Popish Plot confabulator Titus Oates of having “consulted together and agreed to put the said Lord the King [i.e., the reigning king, Charles II] to death and final destruction, and to change the lawful established religion of this kingdom to the superstition of the Roman Church.”

The prisoners made a deft and eloquent defense, impugning the credibility of the embittered ex-priest Oates who could produce no evidence to support his conspiratorial charges — all the stuff that would become the common perception a few years later when a disgraced Oates stood in the pillory for the bloodbath unleashed by his fabulisms.

But in 1679 — what with being hated above all else — the trial was a foregone conclusion. They were hanged to death, then quartered posthumously.

In common with almost all the victims of the Popish Plot persecutions, all five denied their guilt at their executions.

I am come now to the last scene of mortality, to the hour of my death, an hour which is the horizon between time and eternity, an hour which must either make me a star to shine for ever in the empire above, or a firebrand to burn everlastingly amongst the damned souls in hell below; an hour in which, if I deal sincerely, and with a hearty sorrow acknowledge my crimes, I may hope for mercy; but if I falsely deny them, I must expect nothing but eternal damnation; and therefore, what I shall say in this great hour, I hope you will believe. And now in this hour, I do solemnly swear, protest and vow, by all that is sacred in heaven and on earth, and as I hope to see the face of God in glory, that I am as innocent as the child unborn of those treasonable crimes, which Mr. Oates, and Mr. Dugdale have sworn against me in my trial … [if I] palliate or hide the truth, I wish with all my soul that God may exclude me from his heavenly glory, and condemn me to the lowest place of hell-fire.