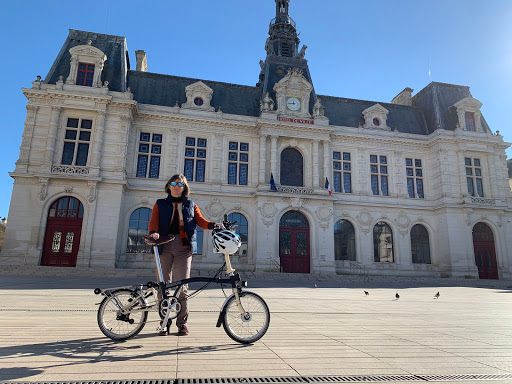 Welcome to another #LazySundayinFrance post. It is school/university holidays here, but that doesn’t mean I have Ed back in my nest. He is away with friends, enjoying the fresh mountain air of the Massif Central and I couldn’t be happier for him, honest, sniff, sniff.
Having been out at the village bar for a fun-filled Saturday night of good food, music and lots of laughter, today really will be a lazy Sunday for me. However, I would like to share my trip to Poitiers last weekend, where as well as doing a laundry swap, I got some treasured Mum and son time and a good dollop of culture too.
Following our lunch in the sun we promenaded by the river, like so many other French families enjoying the mild February weather, then I took myself to the Musée Sainte-Croix. Conveniently situated a short walk from Ed’s apartment, I thought I was off to visit an art gallery. I was wrong.
Yes, there is art, but there is so much more as well. Sculptures, including some newly arrived Rodin and Camille Claudel pieces, plus some fascinating artefacts found locally, illustrating the history of our area. I had a lovely time, all for the bargain price of 2.50€, the standard Sunday entry price, and I would happily go back, although there are more museums I want to visit while Ed is studying there. It was an oasis of calm and tranquillity, even though I could hardly describe Poitiers as bustling on an off-season Sunday afternoon.
All in all, it’s been quite a cultural week for me. Our local cinema was showing the film Colette, in English, but as it’s the story of one of France’s most celebrated writers Colette, I felt as though I was adding to my cultural appreciation of la belle France. Not only was it a great insight into Paris of the Belle Epoque era, but it left me feeling inspired to attempt to read one of her books, in French. I’ll let you know how that goes.
My next cinema visit was for Facteur Cheval, a real French film, so I was a little afraid that I’d not be able to keep up with the dialogue. However, it is such an intriguing story, I couldn’t miss it and as it happened the dialogue was sparse, so I had no worries there.
This film tells the remarkable true story of a postman, Facteur Cheval, who built a palace by hand, using stones he collected on his rural rounds; amazingly he covered around 30km, on foot, every day, in the Drome, a beautiful but hilly region situated between the Rhone river and the Alps. This project became his passion and took him over 30 years to complete, then he spent another 8 years building his own tomb in the village cemetery.
Twenty years ago, Adrian and I visited his Palais Idéal, which is an extraordinary sight and still an open tourist attraction today. The film was beautiful mix of the stunning scenery of the Drome and his life that was filled with sadness as well as determination to complete his palace. If you get the chance to see this film, (you can watch the trailer here), or visit the Palais Idéal, I encourage you to do so.
We’ve certainly had great fun looking through the photos from our holiday in September 1998. The perfect way to spend a lazy Sunday in France.
Source: frenchvillagediaries.com