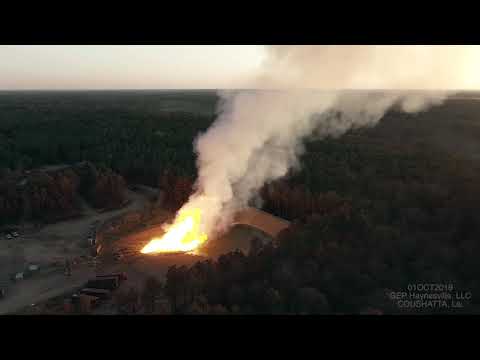 (DeSmog) – For the fifth week since the blowout began, a large flare is still burning at the site of GEP Haynesville, LLC’s blown out fracked gas wells in northwestern Louisiana. The blowout occurred on 30 August 2019, shortly after the company began a frack job, igniting two adjacent wells. A state official estimated that efforts to contain the blowout could take another two months, or more.

The flare has gone out at times, resulting in fluid from the well, including what the oil and gas industry calls “produced water,” spreading a mist into the sky over a mile away, alarming nearby residents.

“Once out, saltwater and whatever else was shooting out into the sky,” a resident, who asked to not be named, told DeSmog. “It would come back down, making a heavy fog, killing lots of trees, and getting on everything.” The resident said the fog persisted for four days and caused irritation and burning in the eyes and any open wounds when outside for more than a few minutes. […]

Drone video shot on 1 October 2019 shows that Blowout Engineers, the contractor trying to close in the leaking gas wells, has established some control over them, while work on a relief well began nearby. […]

“The current effort is focused on the attempt to fully kill the wells at [the] surface, which is the fastest way to stop the blowout if it can be done safely,” Courreges told DeSmog. “At the same time, work has begun on intercept wells to kill the blowout wells at depth. That is Plan B, but because it is more time-consuming, that effort has been begun before we know if [the] surface kill plan will work.” […]

He added that keeping the flare lit until the well can be shut in is considered the best option.

“From the safety perspective it is far better to have the methane burned off in a controlled manner rather than take chance that wind or other factors could push a flammable amount of methane into the work site and endanger the workers with additional risk of fire or explosion,” Courreges said. “As to the environmental concern, the main byproducts of the burning of methane are CO2 and water, and while CO2 is certainly a concern as a greenhouse gas, methane is far more potent.” […]

Anthony Ingraffea, a Cornell emeritus scientist and engineer whose research first suggested the methane leaks from fracked gas could make it worse for the climate than coal, also thinks residents nearby should have been warned about the potential health risks from the blowout. […]

“A long-term blowout like what is happening there has significant environmental impacts,” told DeSmog. “You’re either exhausting into the atmosphere unburned hydrocarbons or you’re burning hydrocarbons in the atmosphere. In both circumstances you’re causing the emission of significant greenhouse gases over a long period of time that were unexpected,” and not included in estimates of globe-warming emissions.

When the relief well drilling operation would be complete remains unclear.

“There can always be nasty surprises when trying to do complex and precise drilling,” Courreges explained. He could only offer a rough estimate “into late November at the earliest.” [more]