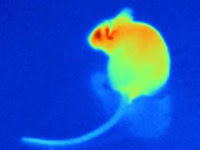 I've spent a silly amount of time recently thinking about infravision. In particular: Should it be nullified when nearby to a torch or lantern? And what is the point of that rule in the first place?

See, in OD&D by the book there is no such rule for infravision being spoiled near artificial light. It seems like a rule that Gygax came to between the OD&D and AD&D publications. It is on AD&D DMG p. 59. It was missing from the Holmes Basic draft manuscript, but was added for publication, presumably by Gygax (p. 10; see Zenopus Archives). We're told by Ernie Gygax that what Gary had in mind was specifically this scene from the original Westworld (1973).

But it makes so little difference in-game that I've been ignoring that rule for a long time now. The DMG says, "It requires not less than two segments to accustom the eyes to infravision after use of normal vision" -- two segments being a small fraction of a round, so I'm not sure how that would ever make a difference in play. I suppose there's the range issue: infravision is 60', and torches as of AD&D light a 30' radius, so I suppose that cuts down the distance. But on the other hand, OD&D says that monsters are seen at 20-80' (Vol-3, p. 9), and AD&D likewise says "A light source limits the encounter distance to twice the normal vision radius of the source" (DMG, p. 62) (as well as real-life experiments supporting the same thing, here; login required) -- so it seems like effective visibility is back to at least 60', equal to PC infravision. Moreover: I'm pretty sure none of us play like the monsters are blinded by PCs with a torch as in that Westworld clip, right?

So in these cases my approach is usually to research what would happen in real life as always the most solid, stable, and consistent way to play it. Previously I've used thermal-vision goggles as a serviceable model. Looking for real-world biological organisms with infravision is somewhat more elusive. Interestingly, there seems to be a lot of active progress in this area in recent years among biology researchers:
Then, most incredibly on the day that I wrote this post, a new piece of research broke: Researchers in China and at U. Mass injected nanoparticles into the eyes of mice, altering them to perceive near-infrared light -- and this might soon work for humans. Pretty amazing! The claim also is that this treatment leaves the standard visible-light perception unchanged.

For all this, the burning question remains; if an infrared-sensitive creature stands near a hot torch or lantern, is its infrared visual capacity ruined? This does not seem to be a thing that anyone has tested to date. In fact, a few weeks ago I emailed one of the leading researchers in this area and asked, "If there is prey nearby and another very hot artificial source (say, fire), does the animal fail to detect the prey?". He kindly took the time to reply with: "Daniel, I don't know the answer to your question" (and also sent the inquiry to a second researcher). So: Still unknown as far as we can tell from current state-of-the-art science.

But I still can't quite see what the point of that rule was in the first place, actually. Perhaps it's just a totally academic issue.