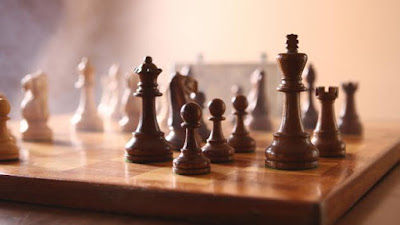 
One of the best things about this game how in-depth alternate deployment and activations work.  All of this is outlined really well in the main rulebook, but I want to take a moment to stress the importance of how greatly this affects overall gameplay.  A lot of this harks all the way back to my WHFB days where "drops" and chaff really meant something when it comes to deployment.  Having more drops than the opponent allows you to see where their most crucial units get placed so you can better deploy against them.  Keep in mind that when it comes to "drops", this is strictly limited to combat units.  It doesn't matter how many NCUs you have when it comes to deployment, but this will matter when it comes to overall activations.  Activation order and the number of total activations matter because the more you have, the more you can "force" your opponents to activate their units so you can better counter them.

Alright, so let's dive into deployment first.  Going forward, I'm just going to call these drops because I'm an old-school WHFB player and you're just going to have to deal with it.  I'll start by using my Robb Stark list vs. the previously posted Ramsay list.

As you can see in the example lists above, Robb's army has a total of 6 drops compared to Ramsay's 4 drops.   This is one of the best things about the Stark Dire Wolves and that's because it comes with good 0-point chaff that are combat units.

If you choose Deployment and therefore starts deploying first, it would look like:

Hell, if you count his drops ahead of time, you can even choose to Outflank with your Outriders because you know the drop advantage is yours.  Always count the number of drops your opponent has and take note of any units of significance.

Do you see the power of having more drops than the opponent?  This is actually one of Stark's most powerful tools and that's the free Dire Wolves with Robb and Brann.  Once Shaggydog gets up in here, it's going to be a hoot.  Even having one drop over the opponent can mean a big difference because it allows you to better set up your slower moving speed-4 Greataxes somewhere that's going to scare those Flayed Men.  If you end up tieing with your opponent when it comes to drops, consider letting them choose deployment so they drop first.


Next, let's talk a little bit about activations.  For the most part, I'll try and keep things as generic as possible.  Knowing the when and why you activate your units will mean the difference between victory and defeat.  This is where most of the complexity of the game comes from.  By understanding that your NCUs count towards total activations and directly interact with the game through the tactics board, this greatly enhances how you play the game.  While most units interact directly with tactics cards, there's also a ton of ways to cheat out free actions.  To explain all of this is going to be really complex because it's simply impossible to predict any and all events that are going to happen in a game.  No worries though, I'll try and give out some hints based on the games I've had so far.  Keep in mind that who is First Player also matters greatly.

Here are some helpful tips:

Alright, that's pretty much all I have to say about activations.  There are just a billion examples and each one of them is unique.  However, I think mastering your activations is the most difficult, most complex, and most rewarding part of the game.  It's probably the biggest factor in identifying player skill and experience, so it's definitely worth practicing.  Good luck!
Source: lkhero