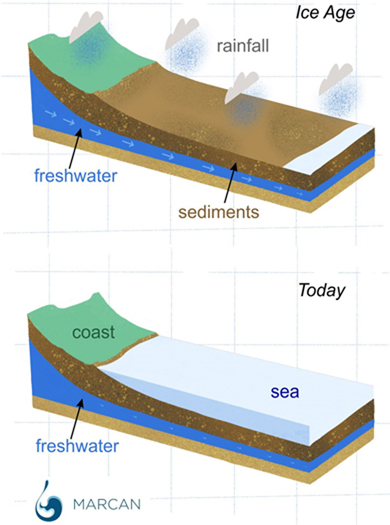 Freshened Groundwater in the Sub-seafloor


Offshore freshened groundwater (OFG) is water hosted in sediments and rocks below the seafloor. It can be found offshore of most continents around the world and could possibly become a source of potable water for human populations living near the coast. A recent article in Reviews of Geophysics describes a range of geochemical, geophysical, and modeling approaches that have been used to investigate OFG systems. Here, the lead author gives an overview of what we know about OFG and where it occurs, and what research questions remain.

What is offshore freshened groundwater?

Offshore freshened groundwater (OFG) is water that has a salinity lower than seawater and that is stored in sediments and rocks below the seafloor.

Freshened groundwater ends up at the bottom of the ocean in various ways.

One way is the recharge of aquifers by rainfall, either in the past when sea-levels were lower (upper panel, right) or in the current day where onshore aquifers extend offshore (lower panel, right).

Another way is via glaciers with can deposit freshened groundwater offshore via basal melting and the development of sub-glacial streams and lakes.

Other sources of OFG include the release of freshwater during the alteration of sediments (diagenesis) or the decomposition of gas hydrates.

Where does OFG occur and what factors control its characteristics and distribution?

OFG was first reported in the 1960s and has now been documented in most continental margins (see map below). Based on these known locations, we estimate a global volume of 1 million cubic kilometres of OFG.

The USA Atlantic margin features the highest number of OFG records, followed by northwest Europe and Australia. Most of the records occur within 55 kilometers of the coast and down to a water depth of 100 meters and sub-seafloor depth of 200 meters, predominantly in passive continental margins. However, OFG has been reported up to 720 kilometers from the coast and in water depths of 3 kilometers.

What methods are used to map, measure, and analyse OFG?

Incidental discoveries during scientific and industry drilling, in conjunction with analyses of total dissolved solids and chloride anomalies in pore waters, have provided most fundamental information on OFG thus far. Coverage of these borehole data is limited, particularly in continental shelves and the shallow sub-seafloor, and spatially biased towards hydrocarbon regions.

Numerical models, on the other hand, have provided a cost-effective method for estimating OFG volumes and emplacement (Thomas et al., 2019). These techniques have been employed at only a few sites around the globe, and most of these techniques are still in experimental phase.

What are some of the unresolved questions where additional research, data or modelling is needed?

There are many key research questions related to OFG waiting to be addressed. These relate to the distribution, extent and dimensions of OFG bodies, the mechanisms and timing of emplacement, the control that the geological environment exerts on the spatial distribution of OFG, their function (i.e. whether they are actively recharging or recovering from past hydrological conditions), and how they will respond to climate change.

OFG research is at the nexus of many fields of research. Addressing these questions will result in improved understanding of the role of OFG in the global water cycle, as well as biogeochemical cycling, and will allow us to understand whether OFG can be used as an unconventional source of potable water in coastal regions.

Geochemical, geophysical, and numerical modelling methods will allow us to address some of these questions, but the biggest step-change in our understanding will take place with a dedicated scientific drilling campaign.

The post Freshened Groundwater in the Sub-seafloor appeared first on VectorsJournal.

Freshened Groundwater in the Sub-seafloor