I'm heavily indebted to Mr Synaptic over at Spectral Codex for some of the groundwork for this post, intended as a bit of an update and last look in one case. While he didn't get inside the chemical factory thanks to unfriendly dogs they were absent on my visit. Therefore I had a good look around inside and investigated its history a little too. I also visited the enormous Qiaoyou Tower that day and noticed it's undergoing quite a few changes. Finally the bus terminal is a really cool piece of design that I think should have as much exposure online as possible. I suggest before reading this post you take a look at the thorough explorations of the Qiaoyou building and the bus terminal . 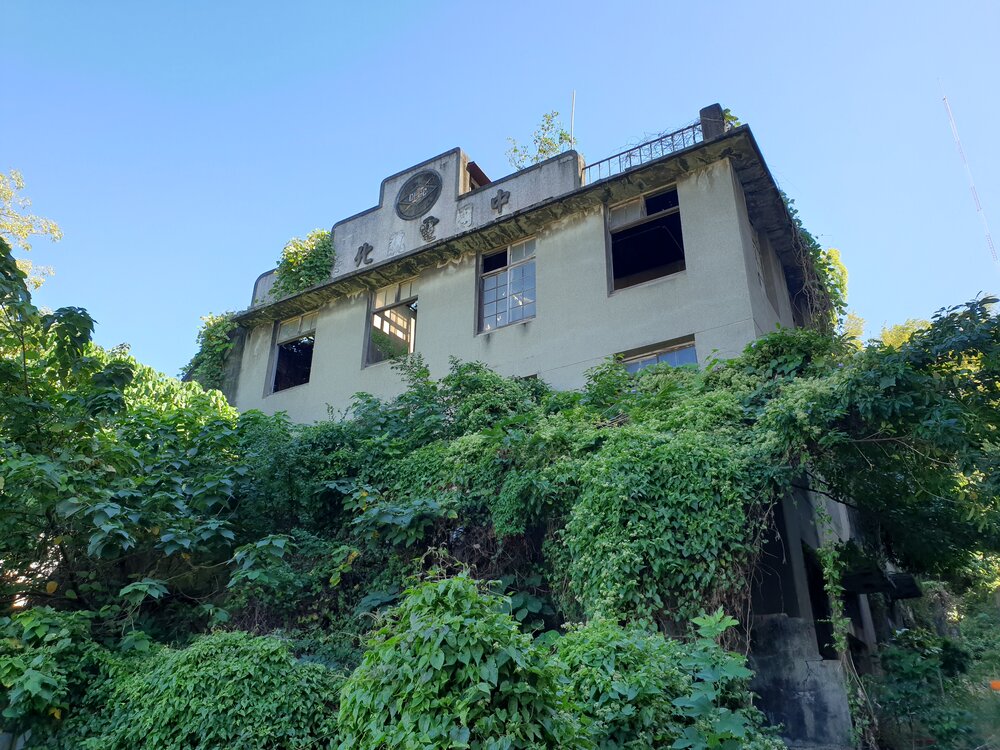 The backstreets of Changhua are a fun place to meander around. Hidden away is a lot of historic architecture. On the slopes of Bagua mountain the unusual facade of this building looms out from a thick skirt of vines. This factory was owned by a company called China Electric and it has clearly been derelict for many decades. With the absence of guard dogs a look around was fairly easy. It's not really sealed off and the residents around didn't mind myself and my friend having a look. 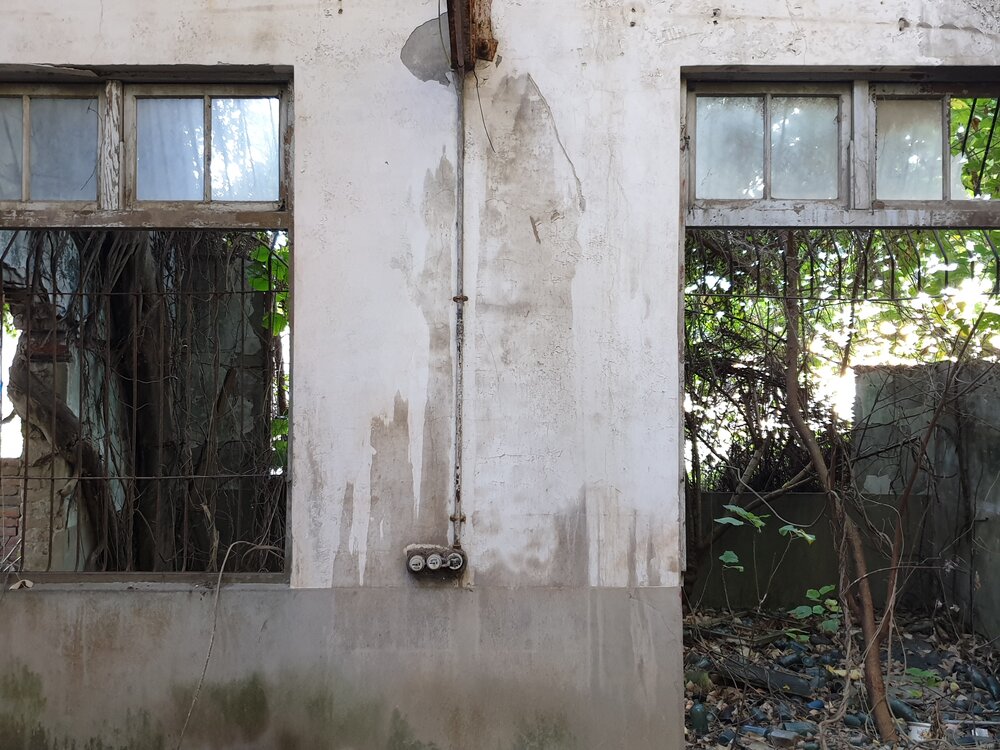 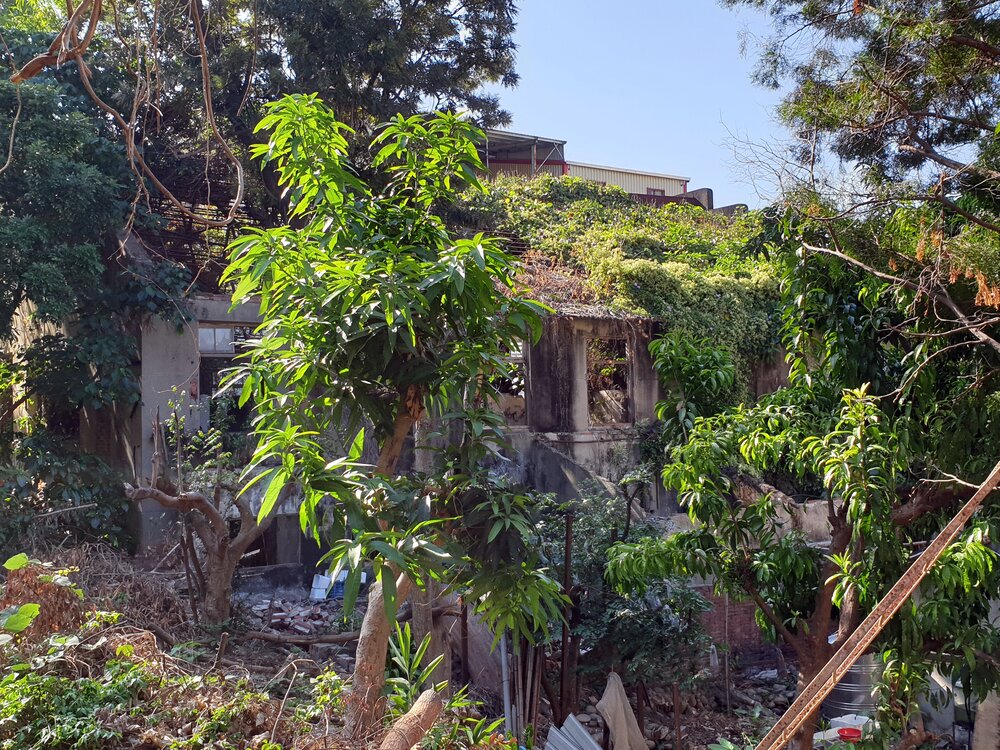 The side of the factory

From a look around online China Electric was founded in 1955 and is a very large corporation today. It's responsible for the manufacture of lamps and lighting systems. I'm not 100% sure if this is the same China Electric that operated the factory here as one character in the name is different but it seems likely. The abbreviation CECC can be seen in the diamond logo on the factory facade. CECC is the name of a Fujian based electric company, but that was established in 2012.. 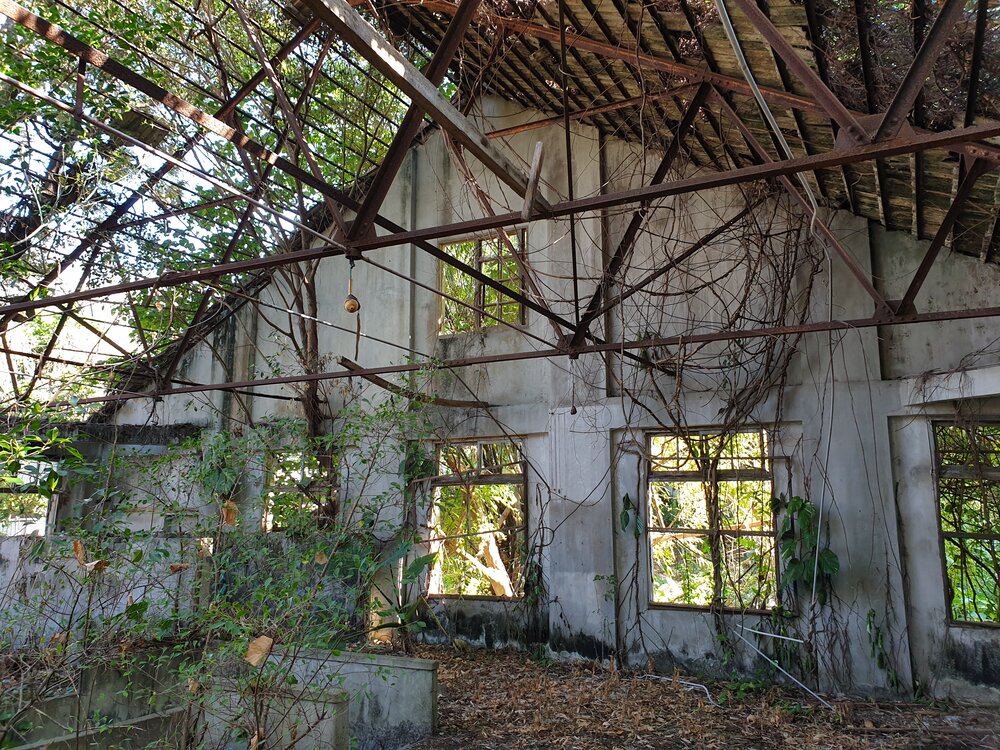 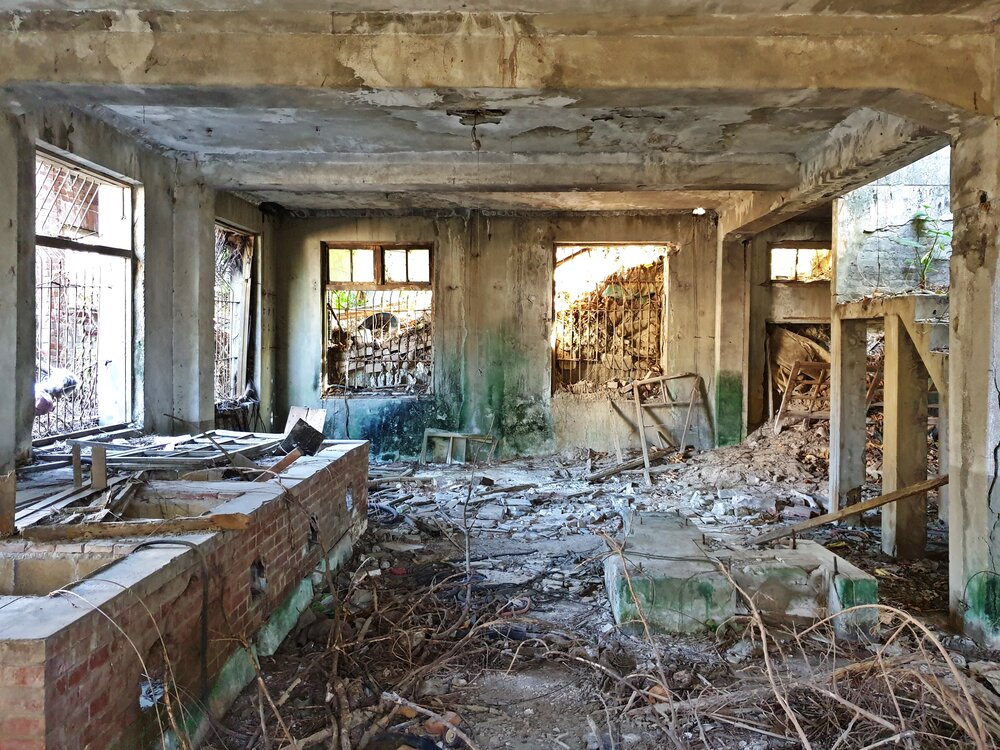 Old stoves on the ground floor

There is a little speculation online that the plant manufactured calcium carbide. This seems a little tenuous as though this chemical is used in some lamps it's very specialized. The 1950's were a time of rapid expansion for fluorescent lighting so perhaps the factory capitalized on that and handled related chemicals. This may also explain why the site here has not been redeveloped. It could have some residual contamination from stuff like the mercury that went into the lights. I am just speculating here though, there really isn't much online about this place, just the Spectral Codex article and this one that is also searching for answers. Despite the possible contamination I think as long as you're not touching too much the risks should be quite low. 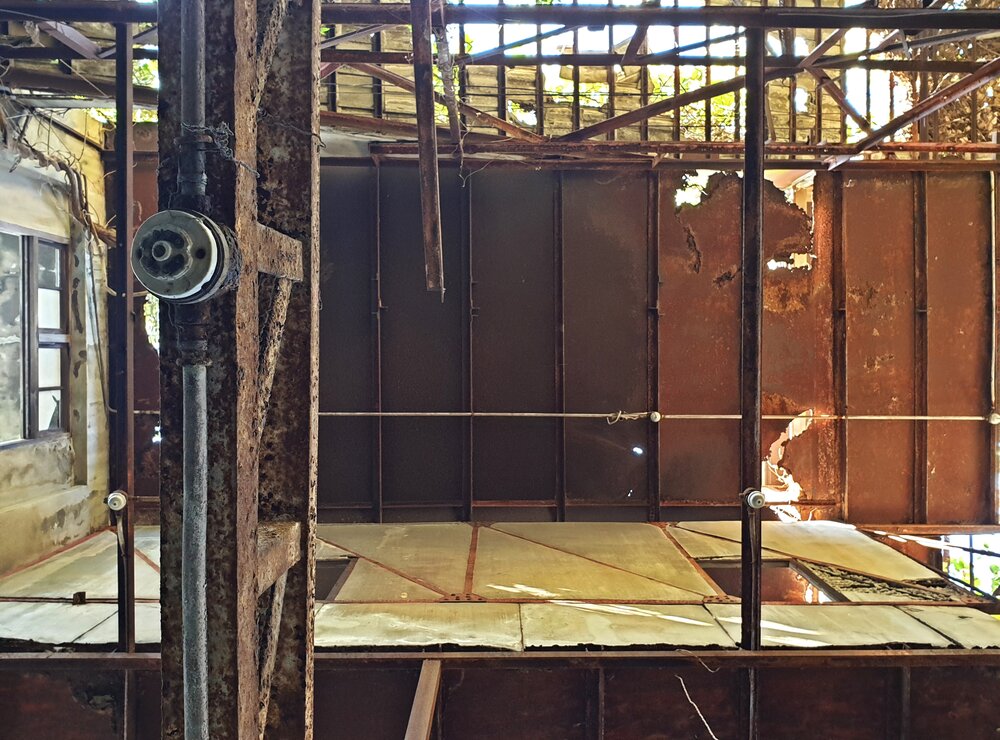 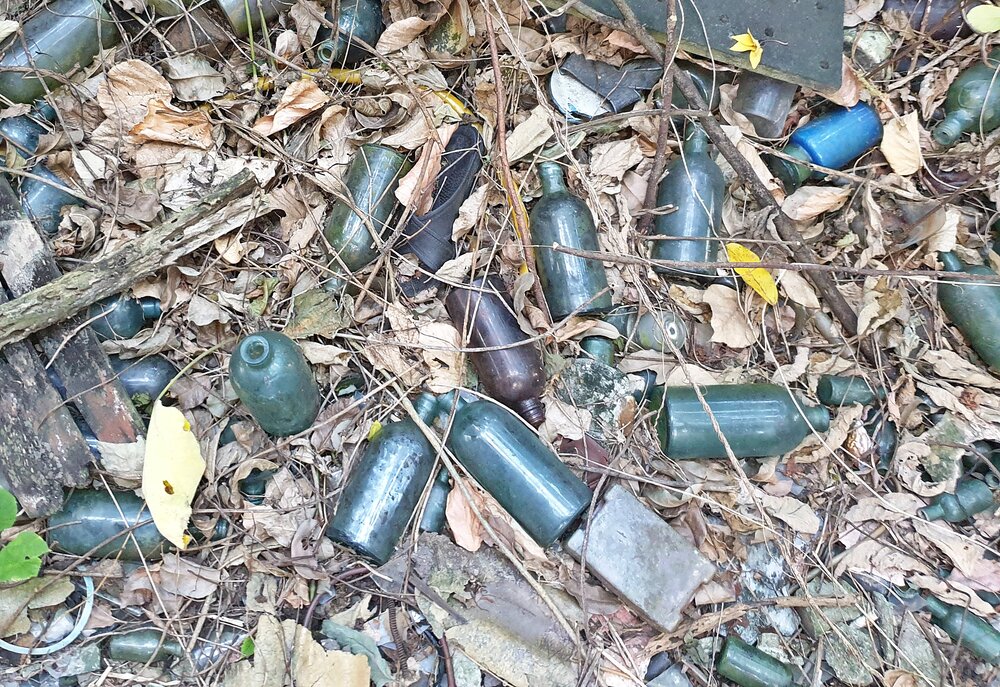 As for the building itself, it's a curious design. I'm leaning slightly towards Japanese era but I think it would be more famous if it was from then. It's also possible it is an example of mid-1950's architectural playfulness and was built when China Electric was established. At the moment there's no way for me to tell but the interior and roof design are suggesting 1950’s. 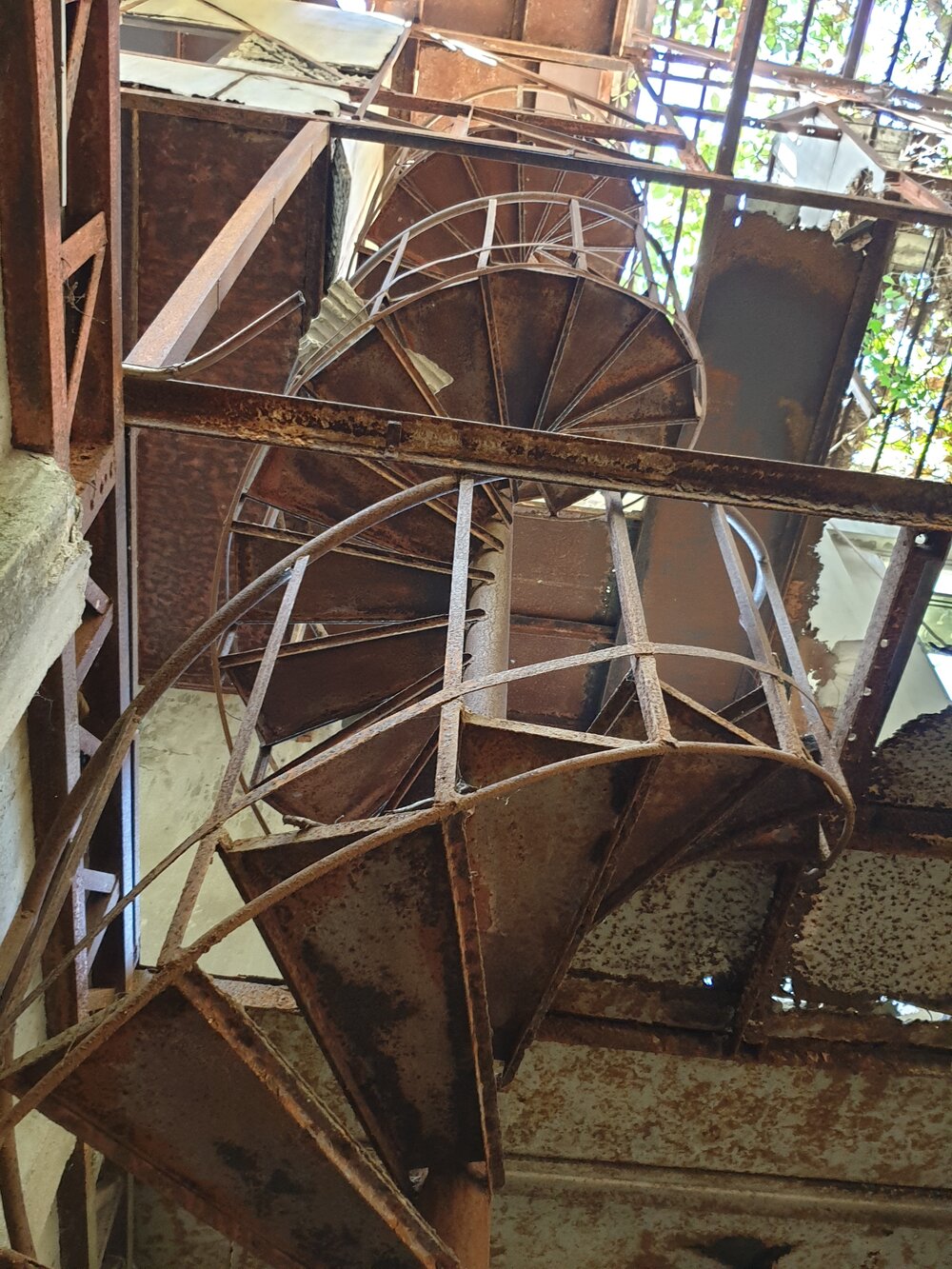 A badly rusted staircase that I did not climb

The site is much smaller than I thought it would be. It's a single hall with two floors and a couple of small side rooms. A lot of plantlife twists around it and the sunlight through the holes in the roof made this quite pretty at times. A very rickety looking spiral staircase heads up to some clearly treacherous oversight platforms. A basement level seems to have had a waste outlet for tainted water. In a smaller room there were a lot of glass bottles. They were likely used for chemical storage. One note is that this was one of the most mosquito infested buildings I've been in so far so bring repellent if you take a look. 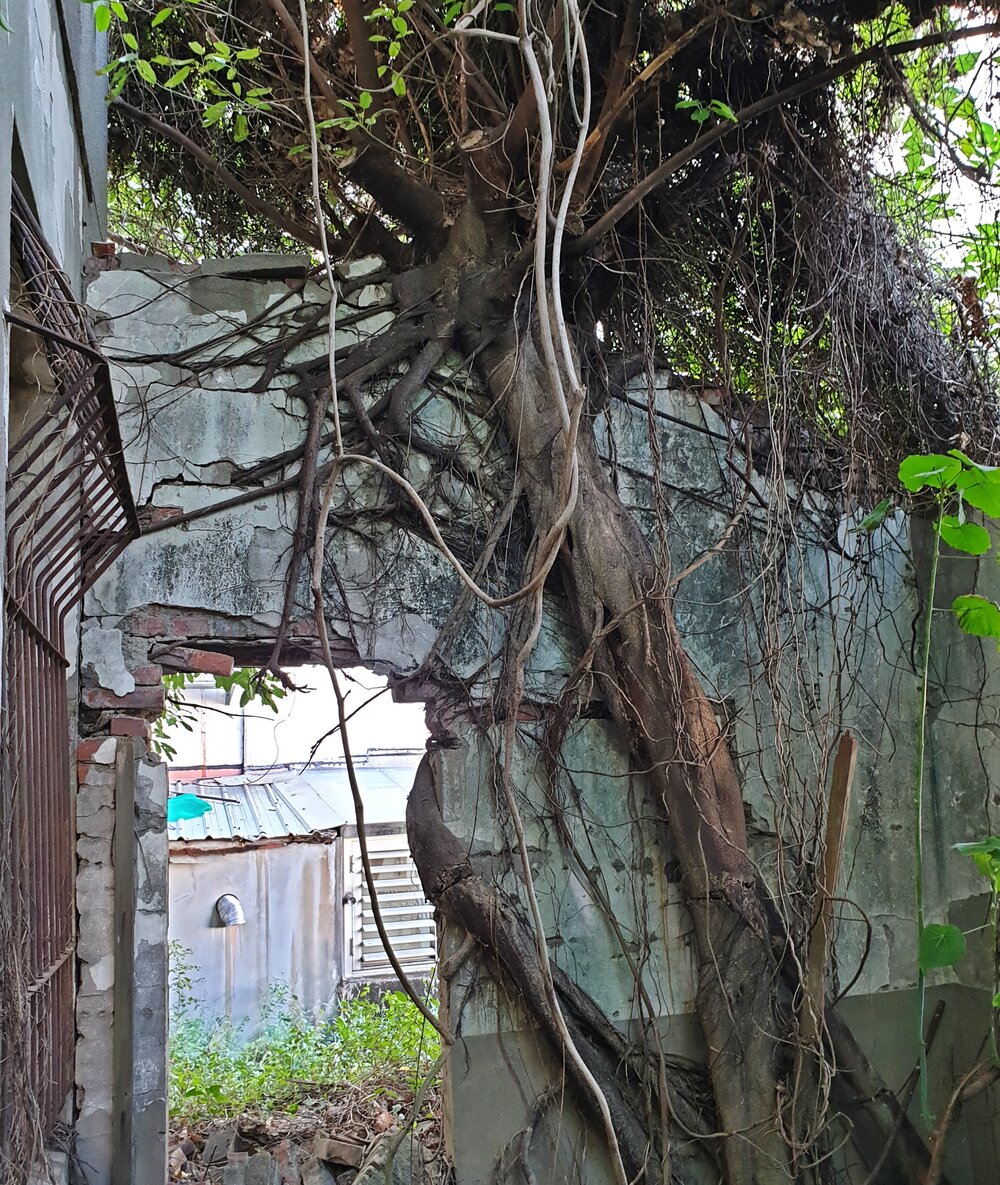 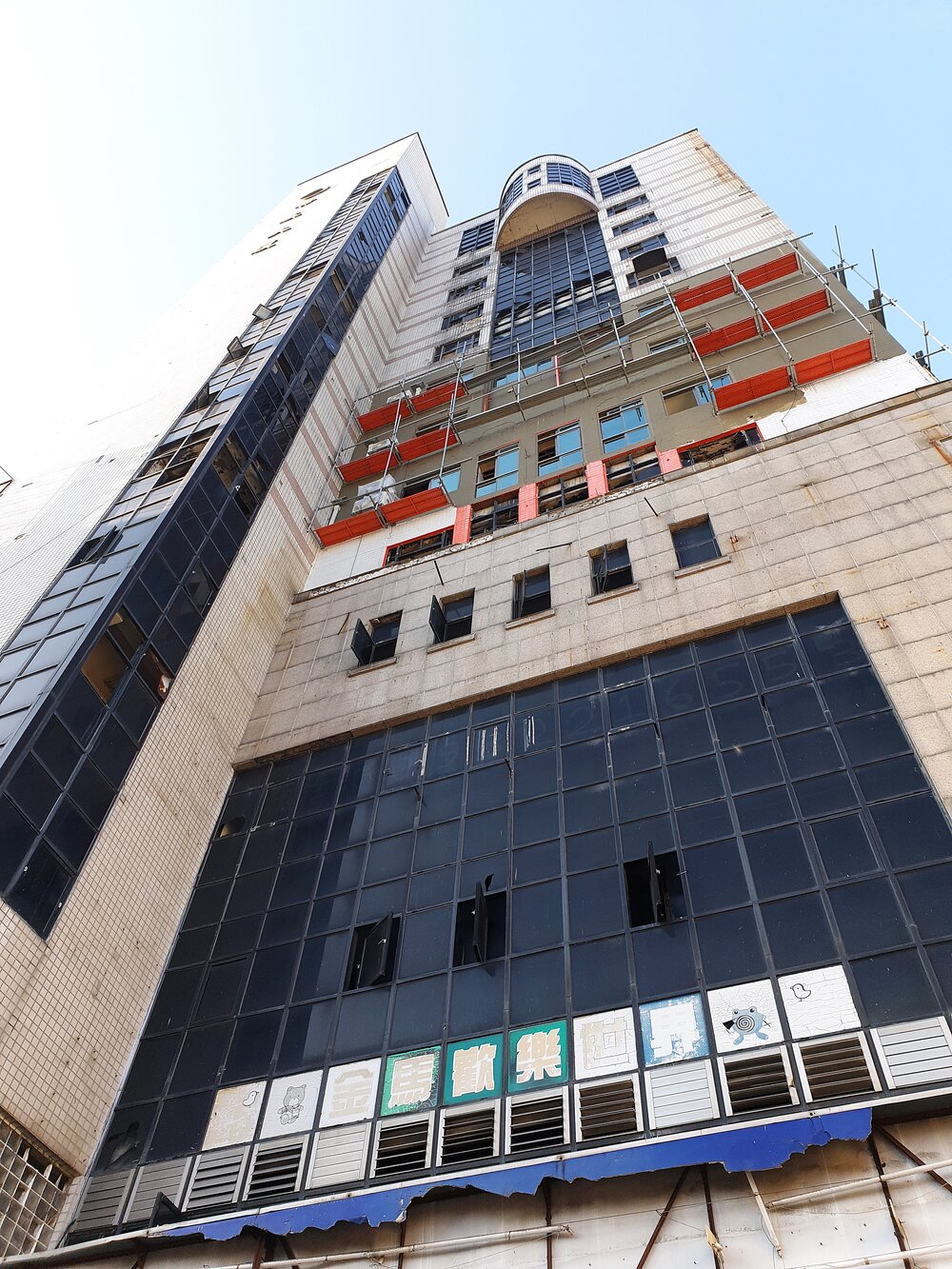 I decided to take a look at the Qiaoyou Building without expecting I'd get inside. However it was not tricky and this was probably due to the changes taking place here. This is merely a little update as this place is changing and it likely won't be accessible in the near future. 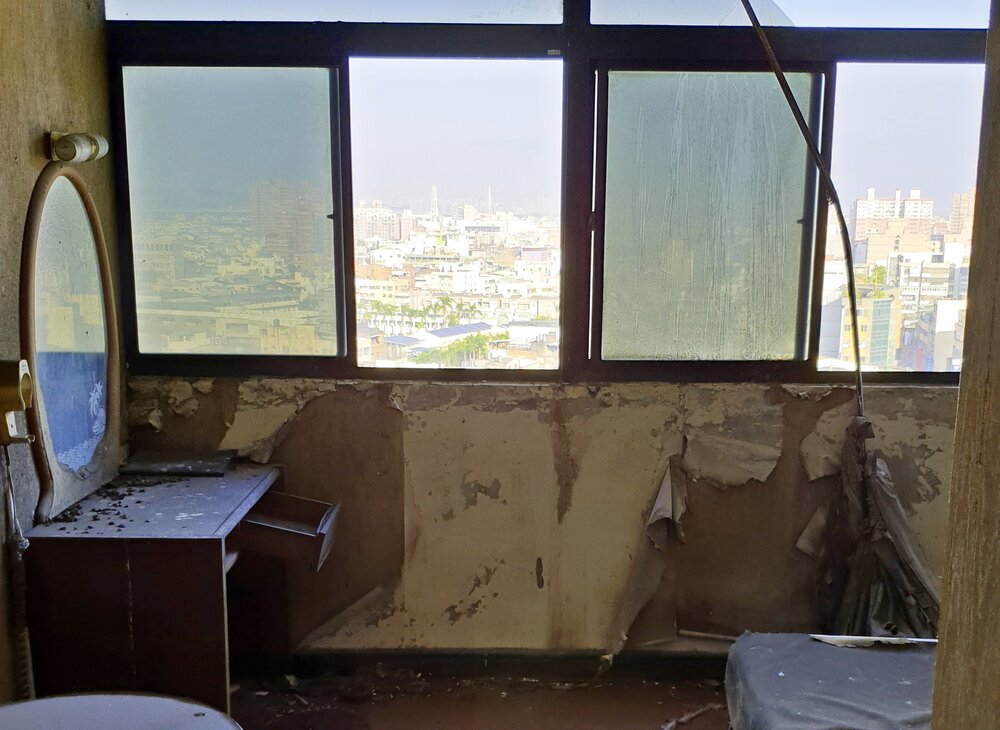 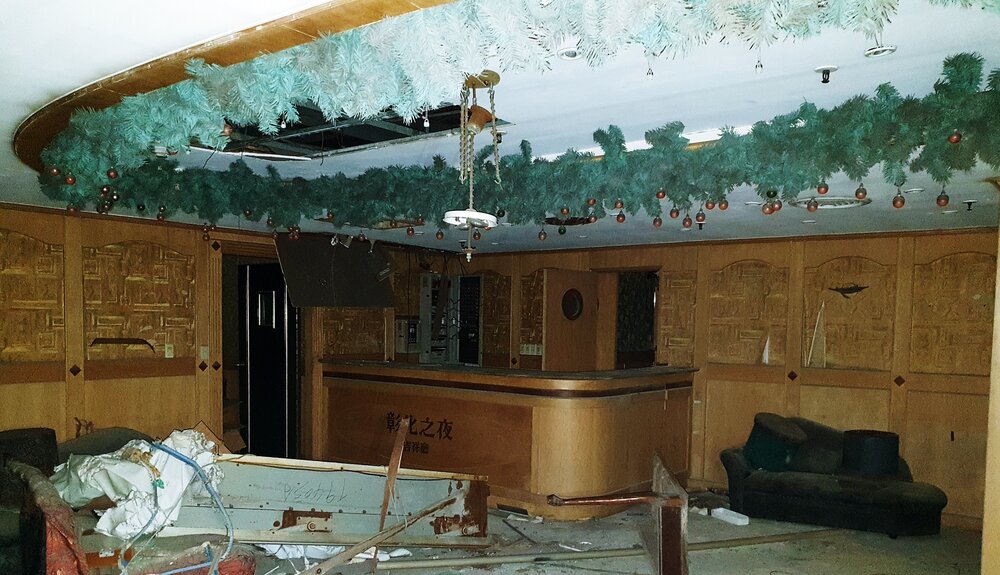 Christmas decorations in a dark nightclub and hotel rooms 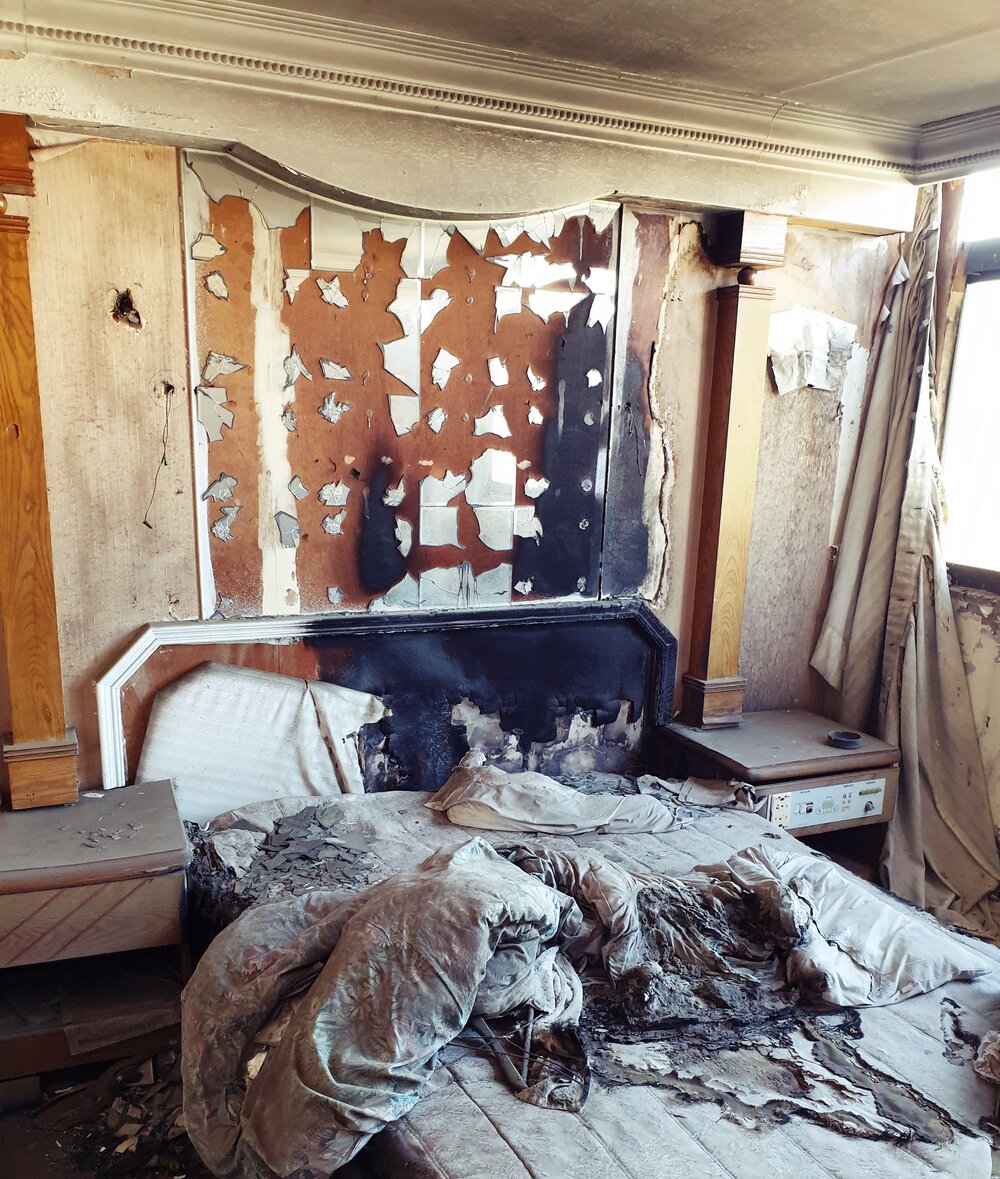 We had a good look around some of the old hotels on the upper floors. These were mostly untouched by the many fires this building has suffered though there was evidence of smaller ones in some rooms. The roof was also accessible and had great views over the city. 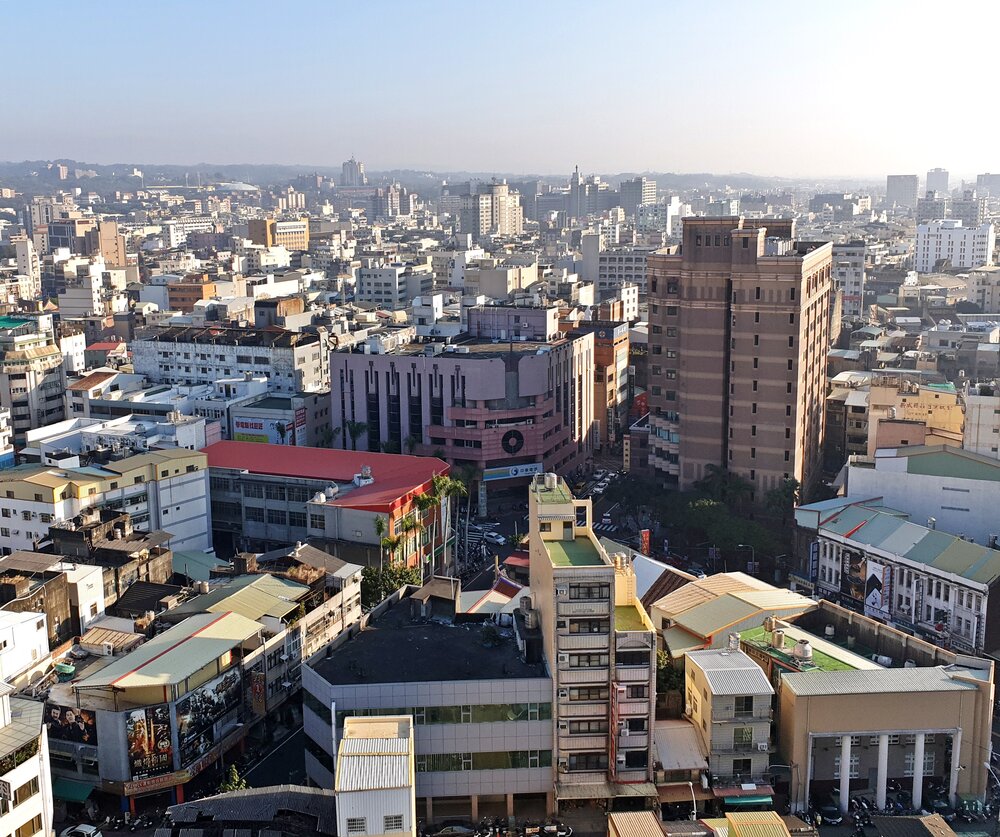 View from one of the tallest buildings in Changhua 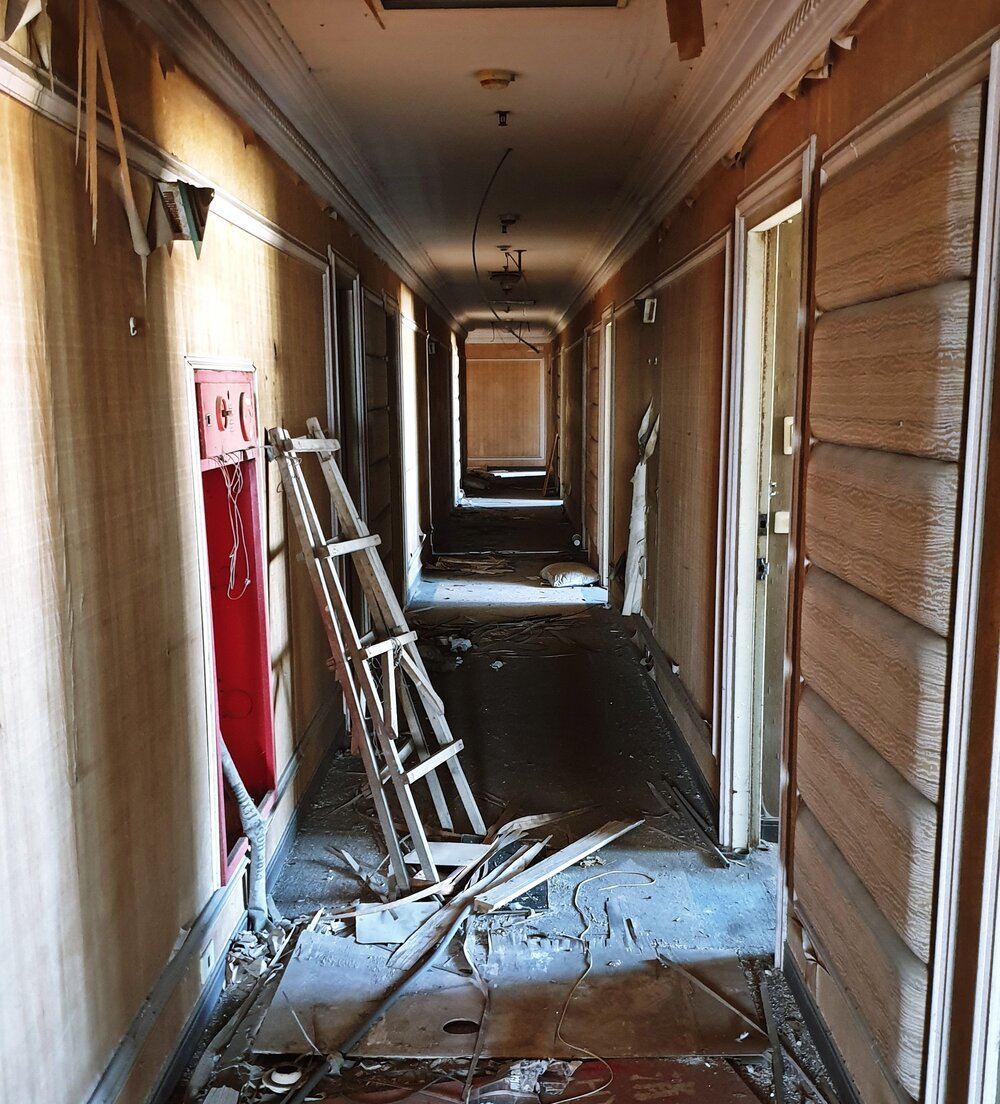 Something that surprised me is Qiaoyou isn't actually that old. It was built in 1993. I thought it was probably late 70's or 80's. It managed to go from shiny landmark of a new Changhua to a ravaged shell in little over a decade. Yuanlin has a similar tower that’s also in ruins but I haven’t heard of anyone getting inside that one. I tried but only the ground floor was accessible. Both have signs saying “Golden Horse” on the exterior. 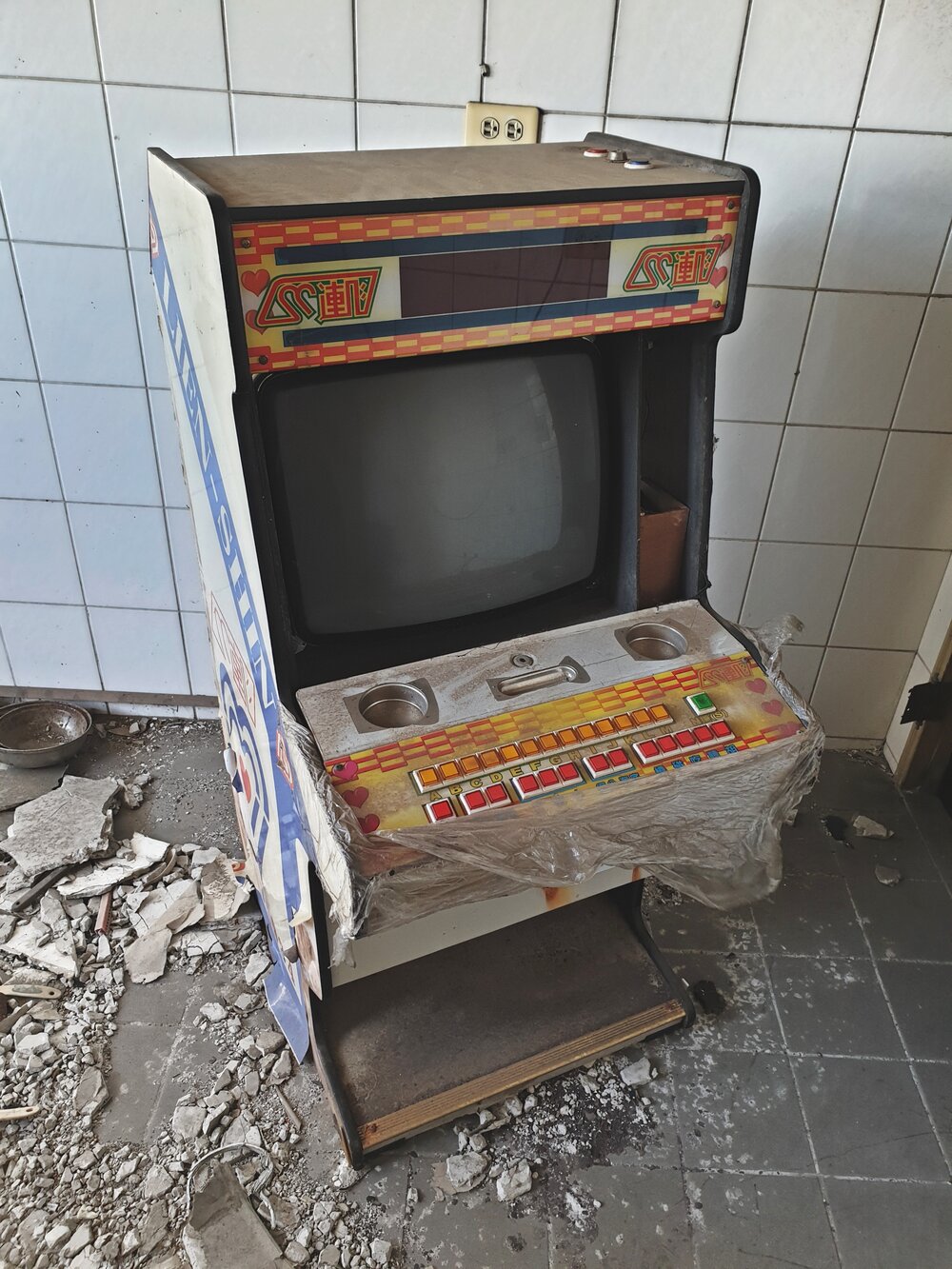 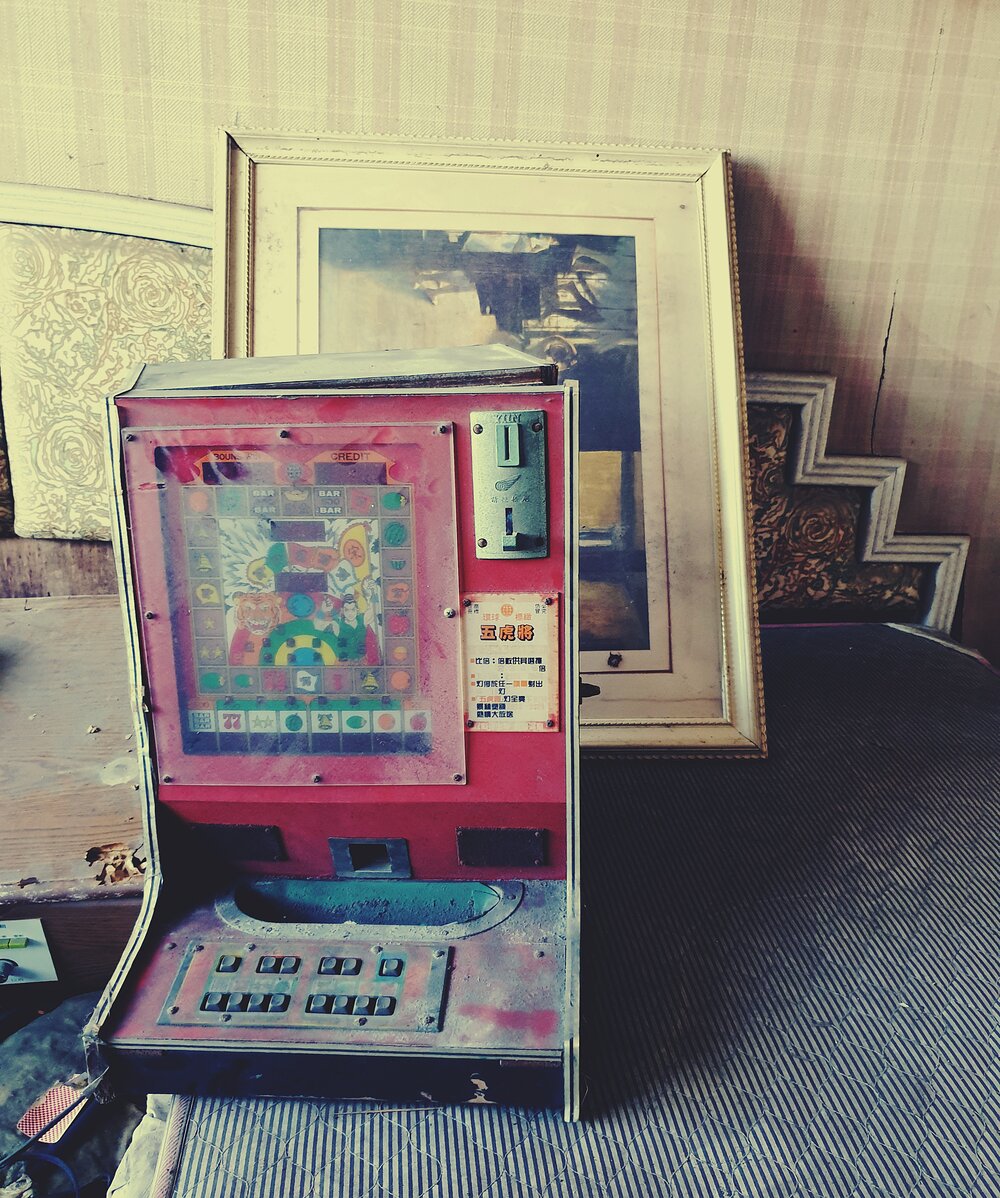 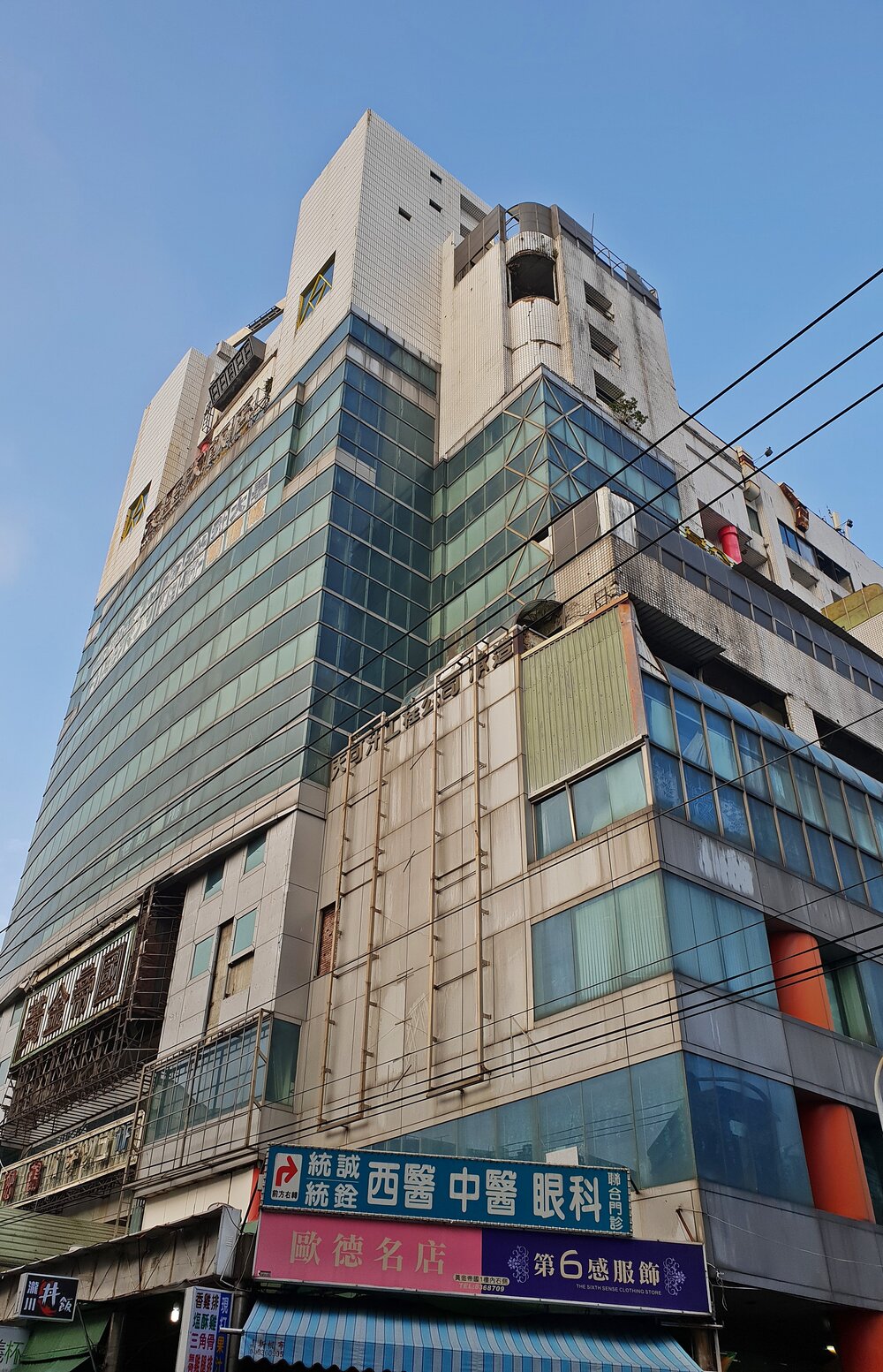 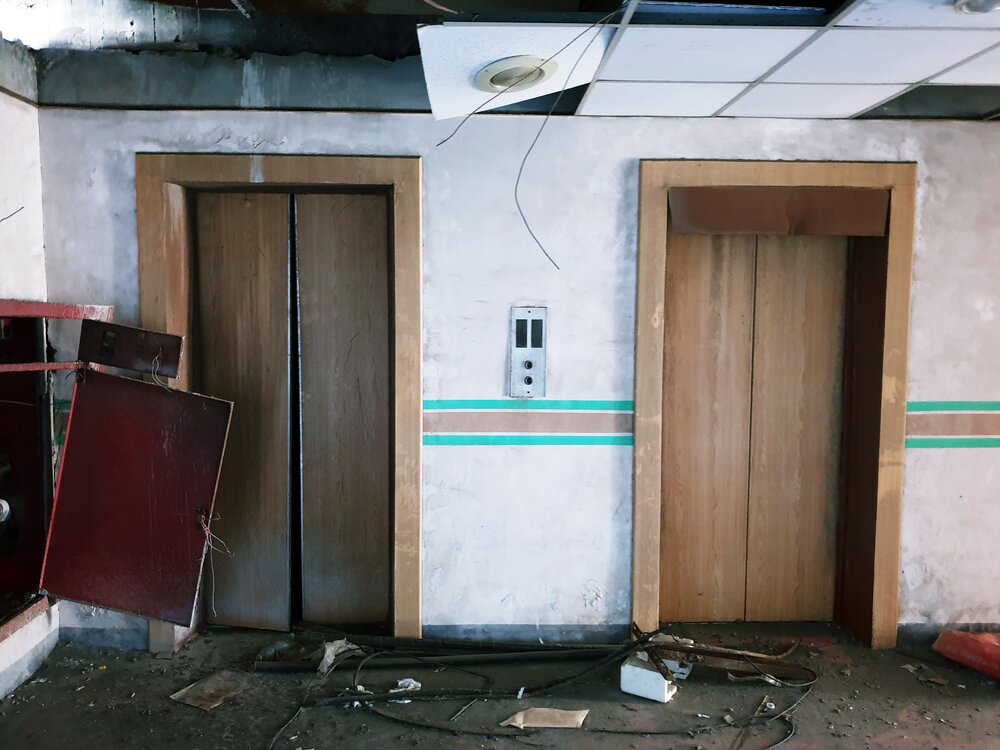 Arcade machines and broken elevators. On the left is the similarly abandoned Golden Horse Tower in Yuanlin

After having a look around the upper floors we headed back towards the ground floor. We'd noticed some floors on the way up that looked under renovation and some even had lights on. We had rushed past them just in case our look around was cut short. Everything from floor 9 and under seemed to have some construction activity but perhaps because it was a Sunday there was no-one around. I have to admit I did wander what would happen if we ran into someone on these floors. 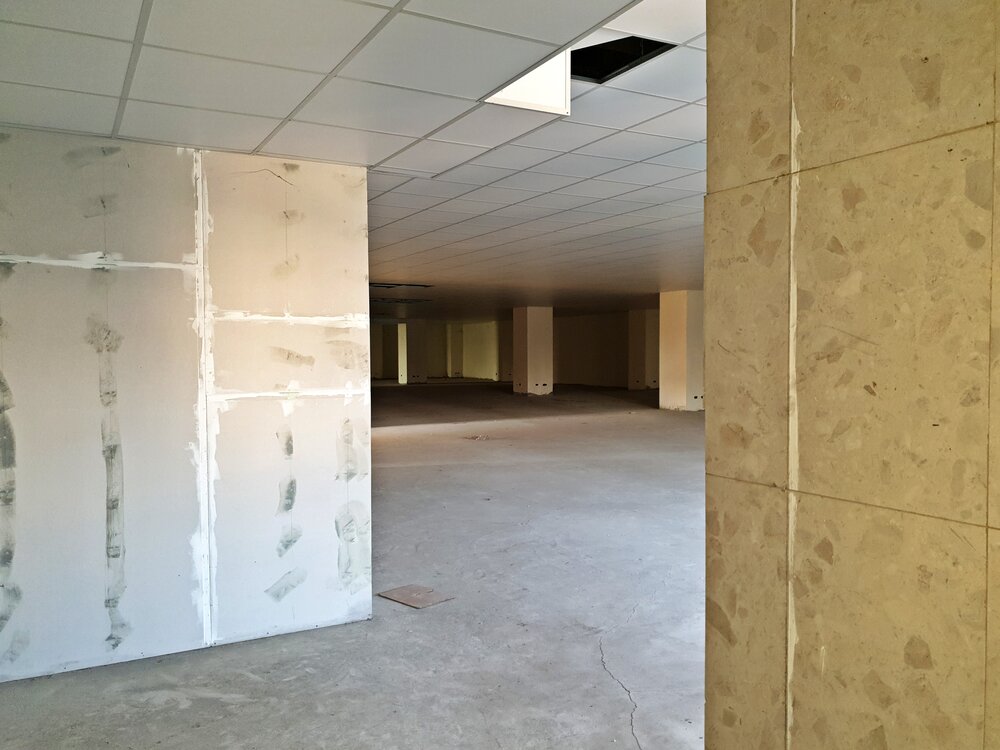 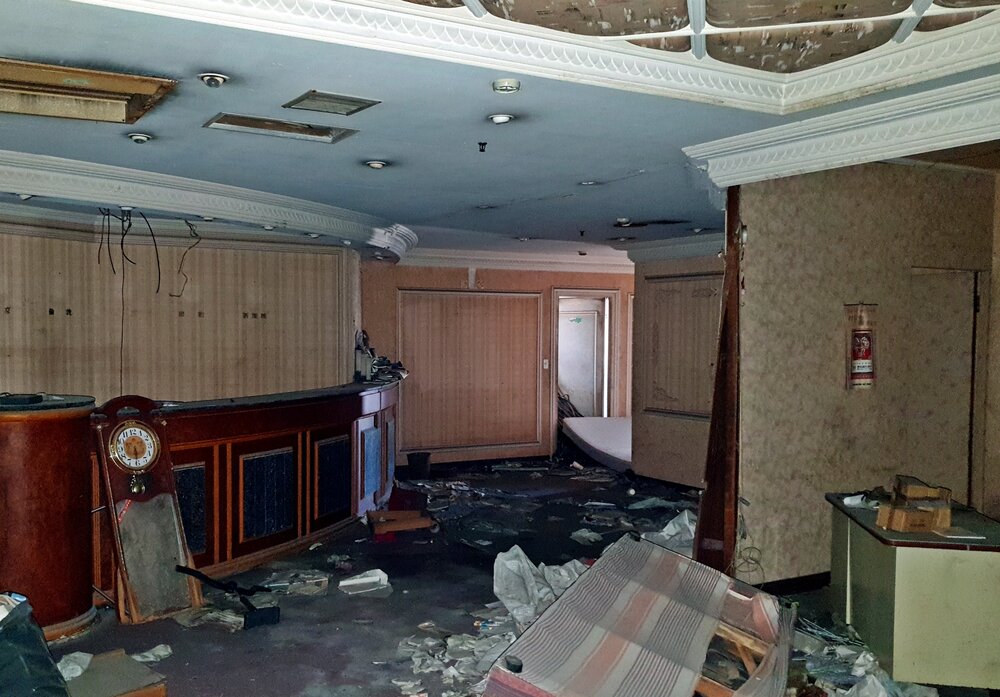 Hotel reception and one of the renovated floors

I later found a few reports explaining what this activity was for. A local businessman called Cai Yufeng has purchased three of the middle floors and is in the process of converting them into a 'smart' hotel. This is a good sign as I definitely noticed there is a dearth of good hotels in Changhua. The article is from March and suggests the hotel would be open by September. Obviously there were some delays as I was looking around in mid-December. A later article, published 2 days after I looked around, suggests the hotel will open in February. It also mentions a tuition center is interested in the 6th floor and a fitness center (perhaps World Gym) is in talks to operate on the 2nd to 5th floors. One of the basement levels will be a Southeast Asian food court. One surprising detail is Cai Yufeng actually lived in the building for 1.5 years in a small room on one of the floors he bought. This was to show the public that the building wasn’t haunted. Given the numerous arson attacks over the years and how open to the elements most floors are this does seem a little mad but it obviously worked out. 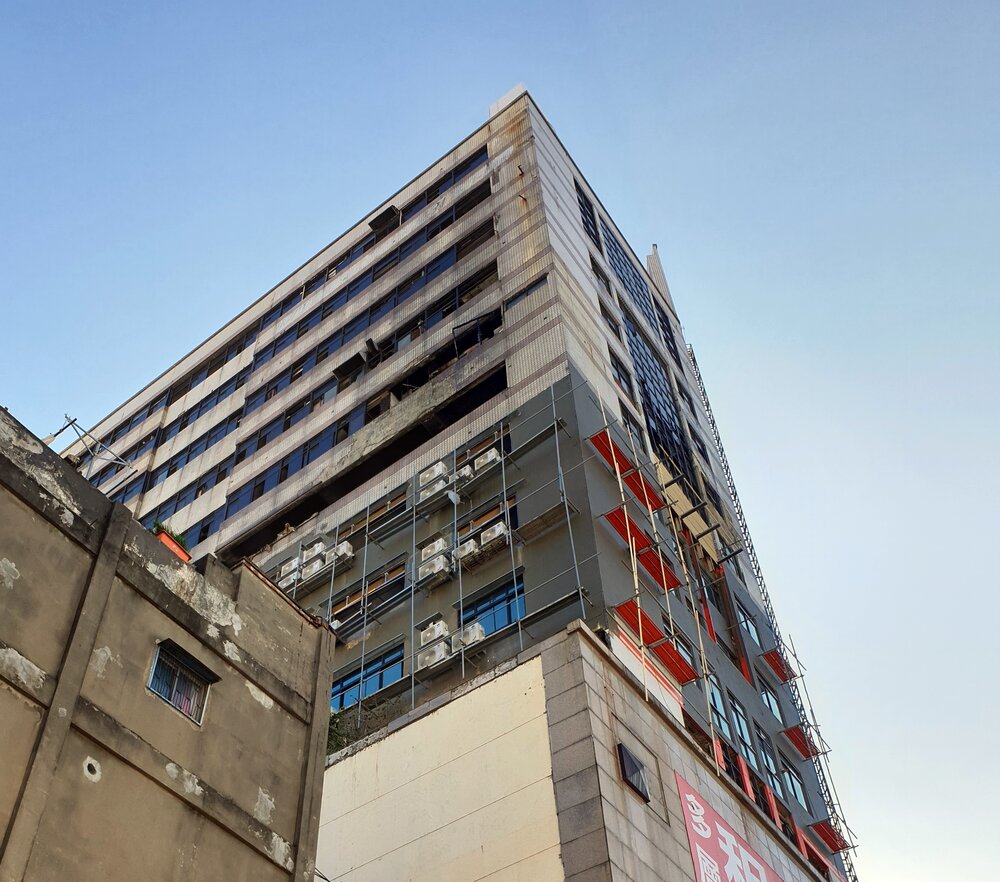 I am curious what will happen to the upper floors. Especially as floor 10, right above the new hotel, is a fire ravaged and chaotic mess. My expectation is they will be firmly sealed off and some workaround will be figured out with new elevators. 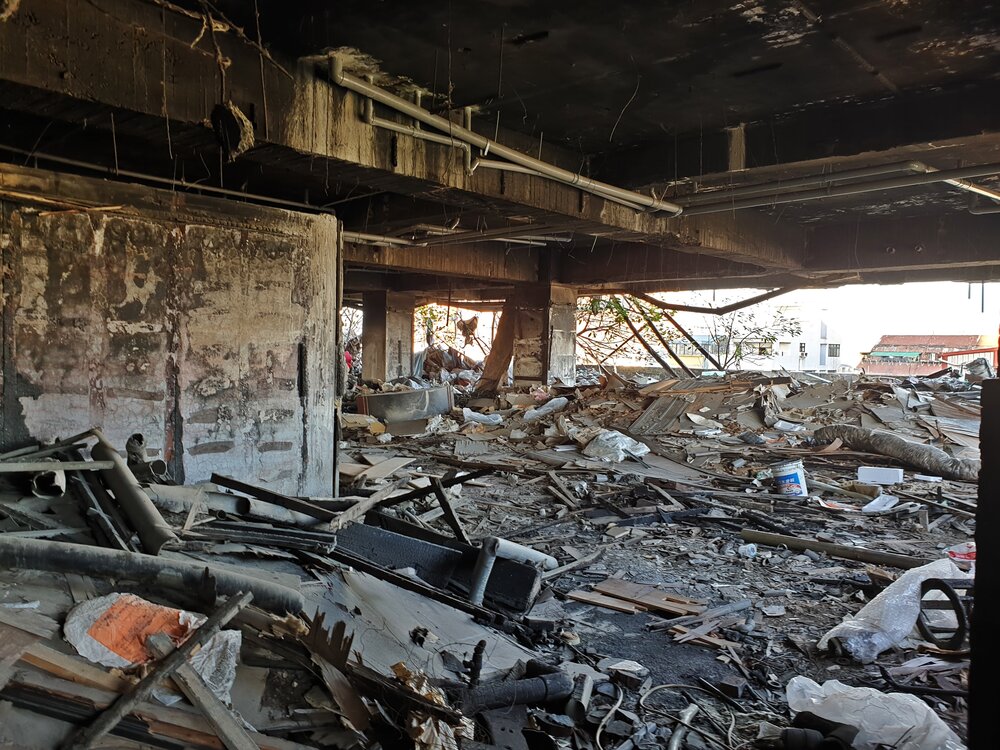 For a time at least Changhua’s newest and most hi tech hotel will be just a couple of floors below the city's most dated, and when open probably sleaziest. If the lower floors are successfully revived then a buyer may become interested in the upper levels. Floors 6-9 were also quite fire-damaged and they have been rebuilt. For now the gaming center on the ground floor is the only business open but it seems this enormous ruin, maybe Taiwan's tallest, will be brought back. The building doesn't have facade elevators or a round thing on top so it should be ok in the future business-wise (you'll see what I mean by that in a future post haha). 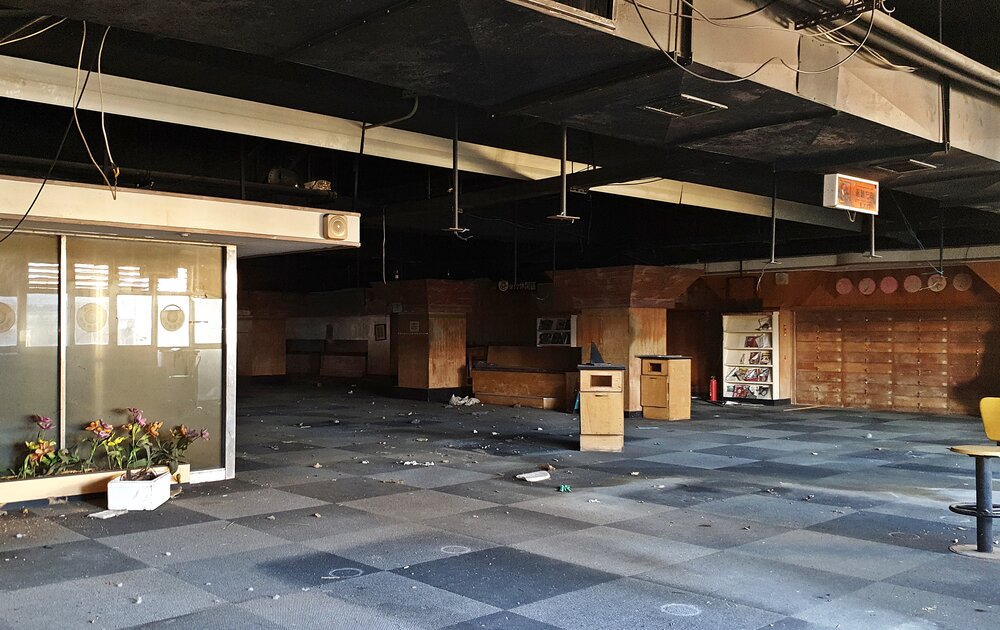 One of the lower floors, this wouldn’t take much to renovate 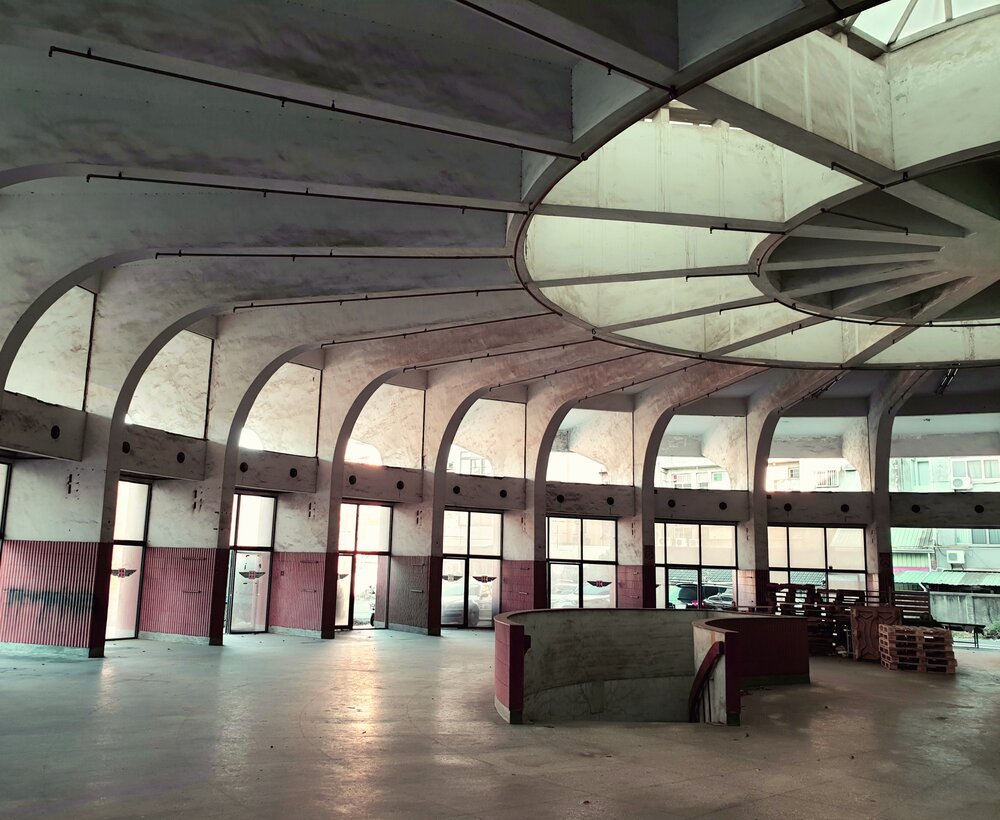 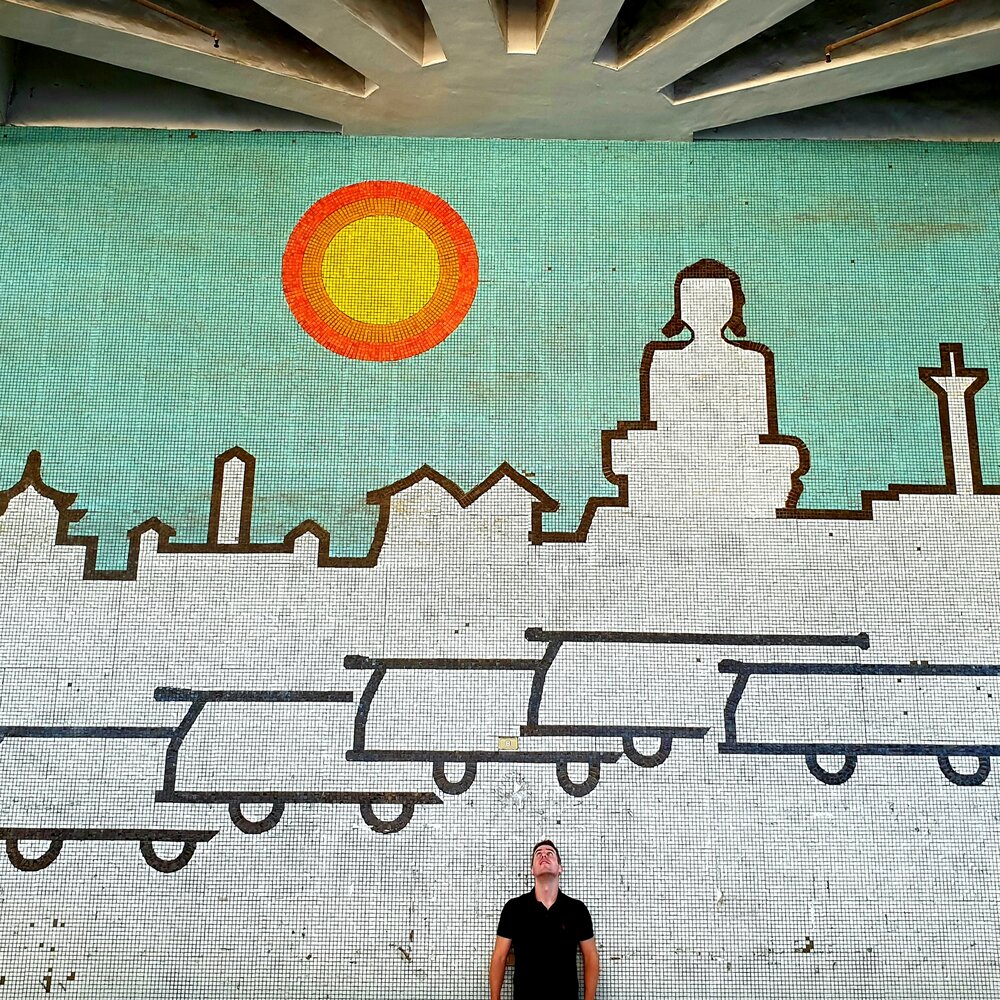 Finally a few pictures from a look around the bus terminal. It's been well written about here however on ascending the attached office block I was greeted with the unexpected sight of Changhua's newest infinity pool. Clearly in recent months gutters up here have become blocked and a calm pool has built up. It was strange, accidental, and from some angles beautiful sight. These sites are quite well known and easy to find around the city (with the exception of the factory) so I have put them on the Hidden Taiwan Map in this case. I don’t think Qiaoyou will be accessible in the near future anyhow. The adventures that make up these entries are often posted as Instagram stories at tomrookart first. So give that a follow too if you like as it can sometimes be a year or more before stuff turns up here. 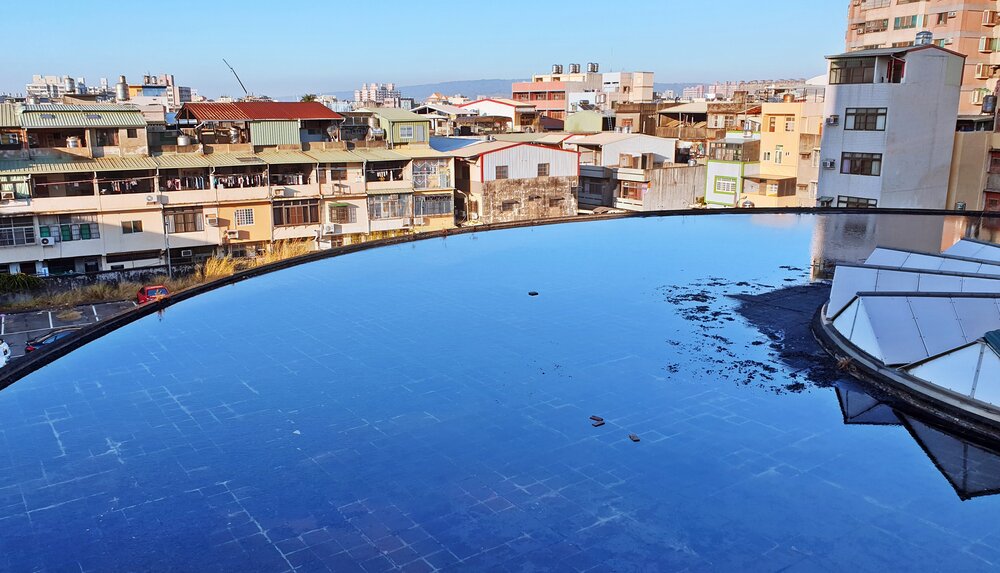 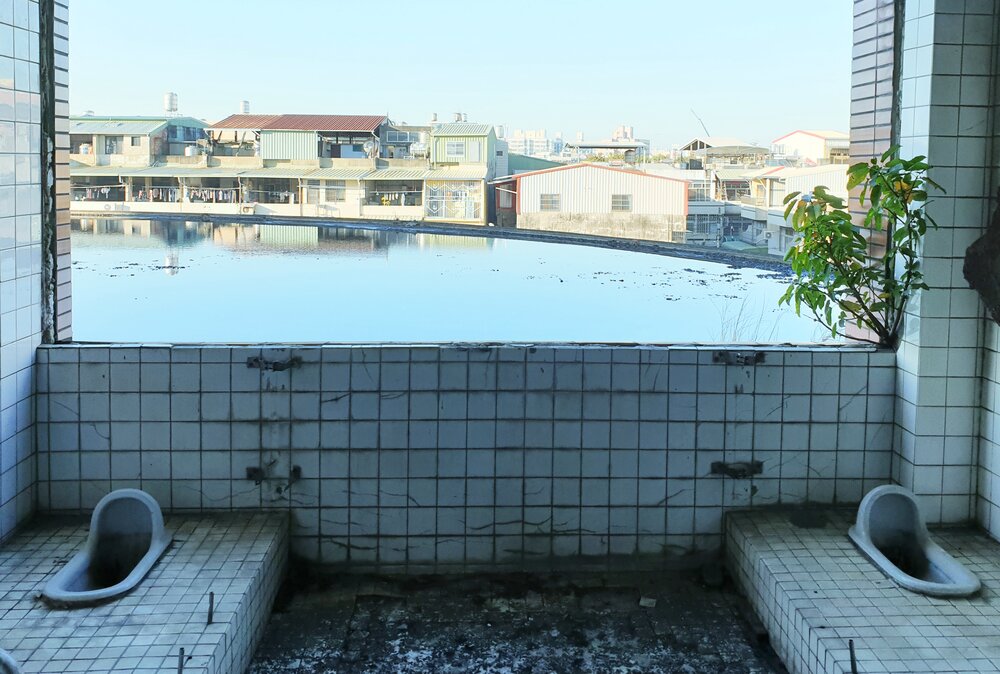