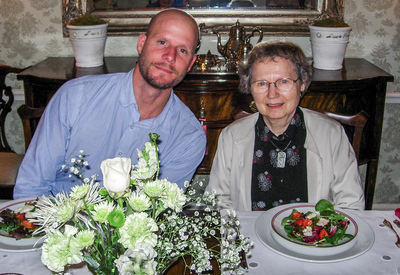 Alyda Gilkey on the life and legacy of her son David, who put 'Pictures on the Radio'

To the world, his friends and in his work, David Gilkey was good-humored, loyal, brave, meticulous, at times a little manic, and deeply sensitive.

The late photojournalist documented natural disasters and wars by bringing his feet — which he called "the greatest zoom lens ever invented" — close into the lives of people.

As an NPR staff photographer, he enjoyed all the jokes about taking pictures for a radio network. Shooting stories around the world, he won numerous awards for capturing loss, struggle and even joy.

As he watched a war-torn Afghanistan change around him, he wrote in 2013, "I photographed the little things I had stopped seeing."

While on assignment there in June 2016, David and his interpreter, Zabihullah Tamanna, were ambushed and killed by the Taliban.

A new book of David's photographs, titled “Pictures on the Radio,” memorializes both his work, and David himself, through memory-filled essays from several of his former NPR colleagues, closing with an afterword by his mother Alyda Gilkey.

"All of his pictures seem to have a story," Alyda told NPR. "I think that was a part of the magic of his photographs."

In an interview with Weekend Edition, she remembers her son, the man behind the lens.

The following excerpts has been edited for length and clarity. Click the audio link to hear the full interview.

Please tell us about him growing up — the little boy in the basement.

He was a bit of a handful when he was growing up. My husband, Dick, was a school administrator, but he really loved photography. And so, when we built our house, he put a darkroom in the basement. And we discovered later that when we would send David downstairs to go play with all the toys in that part of the basement, he would often go in and look at his dad's photographs, which we're standing up in a big cabinet. Dick showed both kids how to use the darkroom, and David really took to it.

Was his camera a kind of passport to the world, do you think?

Oh, definitely, yes. He loved to travel, loved to go and see places. So the camera was just perfect for him. And when he got his first job with a newspaper in Boulder, Colorado, then the company that owned that — Knight Ridder — sent him to South Africa. And he just thought that was wonderful. Then when he went to NPR, that was just perfect because he could travel the world from there.

Alyda, I’ve got to ask, did you worry about him?

Of course, always. When he was growing up, he was always doing things fast anyway. I mean, he skied fast, he skated fast. He was on the roller speed skating team, which was just the perfect thing for him.

The photos in this book are utterly stunning and, just to note a few: I think the cover photograph is Lance Cpl. Anthony Espinoza in Helmand province [in Afghanistan], wiping the sweat from his eyes with his gloved fingers, and Crystal Turner, a Marine vet hugging her year-and-a half-old daughter to her knees when she's home. And then a Palestinian man on the West Bank holding his dead pet bird after an attack.

This is personal — but I have to ask. Did you ever did you ever urge him to stop as he approached his 50s — you know, say, ‘Come on, David, settle down in Happy Valley [in Oregon]’?

I talked to him about it once and I said, 'What kind of photography do you really want to do?' And he said, 'I want to do the kind where I have to go out into the world and find out what's happening.' And I said, 'Well, I guess you're never going to be a wedding photographer.' And he said, 'No way. No way.' It was just what he wanted to do.

Why do you think people opened up their lives to him — as so many did?

What do you hope people will know about your son as they go through this book?

I hope that they'll realize that he was very sensitive. And that kind of got him in a little trouble when he was growing up because people didn't realize how sensitive he was, but — he was a good son.

Ed McNulty and Peter Breslow produced and edited the audio for broadcast. Emma Bowman and John Poole produced it for the Web.

Alyda Gilkey on the life and legacy of her son David, who put 'Pictures on the Radio'