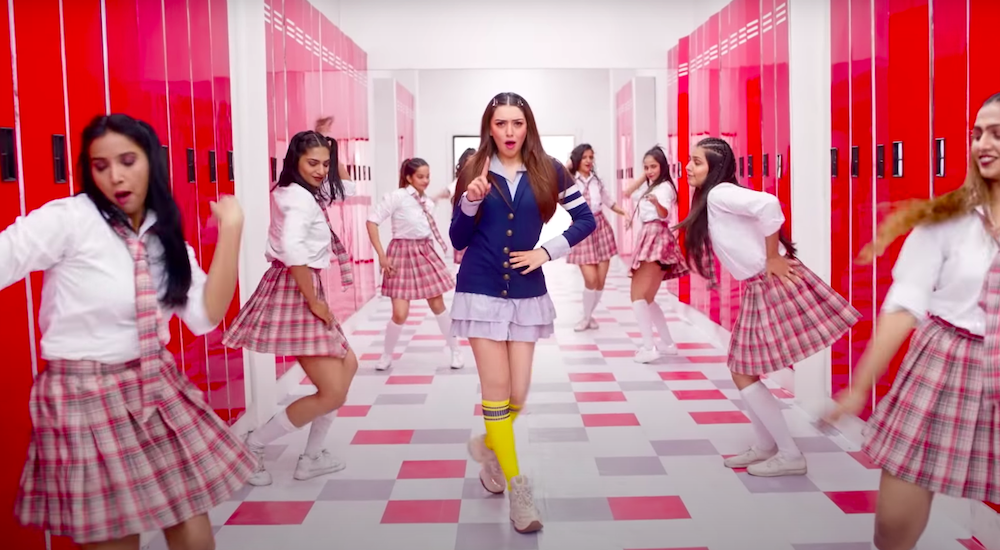 Bollywood songs and objectification go hand in hand. Tony Kakkar’s new song proves once again that some things might just not change!

It is 2021. The time when the world is all set to welcome 5G internet, promising new technologies like the Internet of Things and other forms of augmented reality. It is the era when the line between public and private spheres is blurred to the extent of vanishing.

The open-source platforms allowing national and international interaction is running at unimaginable speeds. It’s the post lockdown period when people are constantly typing on-demand video titles on OTTs rather than on movie ticket booking websites.

In this highly advancing time, cinema too has evolved at an accelerating rate, catering to progressive societal needs. Similarly, Bollywood has shown its growing creative instincts in multiple forms.

Bollywood has come a long way. With the advent of content-driven films and niche issue portrayals in mainstream cinema and even realistically relatable narratives, you can see a change. Along with this, more production players have appeared in the picture and have strategies to reach the farthest cinema consumer.

Yet, certain ditches of conventional Bollywood have stayed with the industry, yearning to be mended. Ongoing debates on existing misogyny, gender bias, objectification, the glorification of irrational beauty standards, etc. in its content affirm the same.

A couple of Bollywood songs, for instance, conspicuously or subliminally still tread on tracks of stereotypes.

In the same light, Tony Kakkar’s latest song, ‘Booty Shake’ released in February can be quoted as an instance. Another Bollywood song, ‘Beyonce (now ‘Duniya’) Sharma Jayegi,’ that went tendentious was criticised as taking racism for a toss.

It had been evidence of how Hindi music industry still needs to retrospect some areas of its content and intent. According to Kakkar’s song, the protagonist overtly claims a condition that the girl can win his love – only after she showcases a ‘booty shake.’

Is being viral really that important?

No matter how innocuously it is stated, the resultant moot lyrics can unquestionably be categorised under objectification. An interesting question raised here is how the ambition of becoming viral and trendy pushes the intricacies of terms to a backseat? How do lyrics and their meanings lose significance in the hustle of gaining millions of viewers?

Nonetheless, social media has provided the largest discussion forum to communicate one’s own thoughts, opinions, creativity and feedback. With the growing digital world, changes are inevitable in the context of media audiences, cultural arenas and societal trends.

The more opportunities ascend in the digital platforms, the more variety is witnessed in terms of content and viewpoints. Hence, the expectations simultaneously rise. Yet if the same content diminishes its worth through backward portrayals and orthodox ideologies, irrespective of its form, social media loses its relevance.

In fact, it is observed that outlandish words, exasperating music and inane rhymes have been incorporated more. Especially, when compared to expectations of an upgrade.

Are we going back in time?

Plenty of examples open up discussion on where we have reached as a society. These could be the rapper Badshah’s raps on the male gaze and attention grasping styles of women and Tony Kakkar’s similitude of a woman with that of a cola drink  How is a woman, still in the 21st century, visualised as an object of desire?

On one hand where the art of various forms struggle to bust taboos, music and songs like these pull our leg back to square one. Quite like a giant python on number 99 of a Snake and Ladders board game.

This isn’t the first time a songwriter has written something as demeaning as this. However, the debate goes further in pointing a finger at their sense of motivation. The motivation hereby emerges the moment lyrics like these reach a million viewers.

So, who is to be blamed?

Despite the fact that today’s audience, peculiarly termed as ‘prosumer,’ demands progressive portrayals, ‘Booty shake’ has been viewed by more than 20 million people. When such music is upheld on the grounds of entertainment, naturally the depth of terms and representations cease to exist.

As the world is a vicious cycle, the supply completely depends on the demand. The popularity of an art form is directly proportional to the demand of its content and method.

So who exactly is to be questioned here? The creators of a supposedly considered ‘art form’ of this sort or the consumer to whom it is addressed and targeted?

What do you think?

Register at Women's Web to get our weekly mailer and never miss out on our events, contests & best reads! Or - get a couple of really cool reads on your phone every day - click here to join our Telegram channel.

Women's Web is an open platform that publishes a diversity of views. Individual posts do not necessarily represent the platform's views and opinions at all times. If you have a complementary or differing point of view, sign up and start sharing your views too!