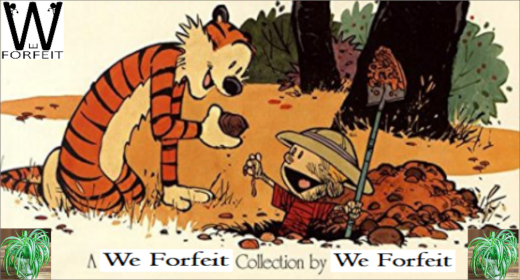 WE FORFEIT (Mix 11) :: Something Approaching Happiness

After the debauchery and destitution of Christmas consumption WE FORFEIT return with a post yuletide message of music, musings and good will.

Although Robbie likes mixing records, he is not a fan of DJ culture. The hype around “selections” made by such and “gets up my goat” he says. How so-and-so managed to unearth some lost gem through hours of crate diggin’ never sat right.

Of course there is a satisfaction to hearing something unheard, of finding out about an unknown and the delight of discovering a new label or even genre. However, the almost elitist sense that we all have cavernous record stores within spitting distance of our homes and hours of your time can be dedicated to flipping through sagging sleeves and warped wax is fantasy world stuff. Obviously, it is important to support your local record shop, but it is just as important to support contemporary labels rather than gazing moony eyed at some disco records bordering on proto-house on Discogs.

The majority of the tracks in this mix were bought on sale, not all but the majority, and WE FORFEIT figured it would be nice to celebrate some modern music that for some reason or other slipped through the gaps and really shouldn’t have. Others are from labels Robbie has had the pleasure of working with, such as the always excellent Bordello A Parigi, Shipwrec, as well as something from one of Glasgow’s stars: Schrödinger’s Box.

The point? The past of electronic music is a wonderful thing and holds a wealth of possibilities, just like the present. To paraphrase Calvin and Hobbes, there’s treasure, and ironies, everywhere.

WE FORFEIT (Mix 11) :: Something Approaching Happiness