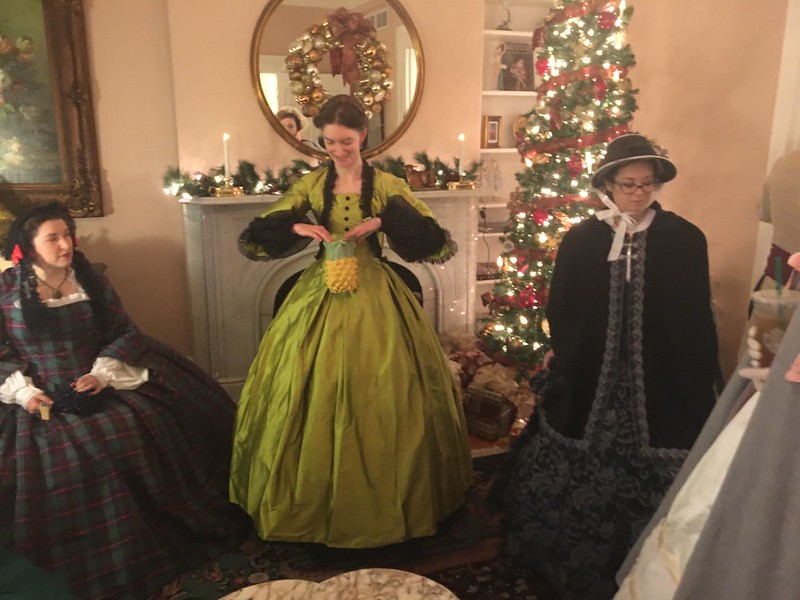 Last weekend was Remembrance Day in Gettysburg, PA; my little group and I like to go out every other year for it. I've been going since 2011 so I'm pretty well stocked on 1860s cold-weather clothes, even considering the learning curve and improvement of sewing skills!

That said, I still like the planning and sewing of outfits just as much as wearing them, so I did make a couple of new items: a "rational dress" and a new silk "dinner dress", plus retrimmed the old satin ballgown for the tartan-themed ball we attended on Friday night. I'll do separate posts on all of those, otherwise I think it will get too long. And I especially want to do the rational dress justice!

So, up today: the Horrible Chartreuse Dress. Why have I called it such a mean name? Well, I'm one of those fair people who doesn't look great in most shades of yellow, and that very much includes yellow-greens. BUT, a good few years ago I saw a silk taffeta in one of those excellent Fabricmart sales that was this wonderfully awful shade of chartreuse, and it was such an 1860s color ("let's play with all these new dyes we have!") and such a good deal I couldn't pass it up. 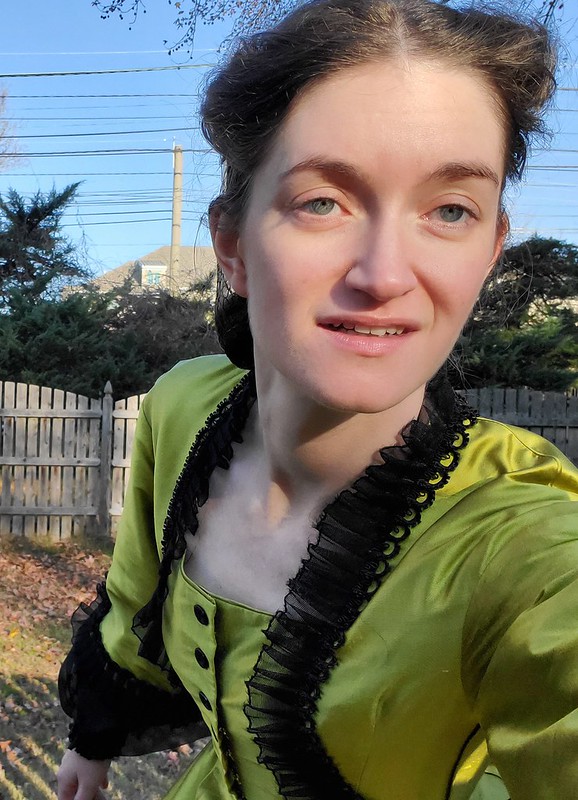 Of course, this was back in the days when whoever was listing silks for sale on their website was just a tiny bit casual in calling fabrics by their correct names, and listing everything that wasn't a very limp and drapey silk as "taffeta." Guys. Shantung, for instance, isn't taffeta. It's softer and has slubs. So...the taffeta showed up and it was, shocker, not taffeta. I grumbled a bit, but kept it because I really did want an 1860s chartreuse dress Someday. (Also I think they got quite a few gentle emails from people who did not appreciate everything being called taffeta that wasn't, as I haven't known them to do that since.) Regardless, I really like the color (for 1860s, mind you, not so much in my everyday wardrobe), and the color varies based on the light and the camera, shifting from more green to almost gold. It's fun!

Fast-forward a few years (four? five? who knows), and I decided I wanted something specially to wear to dinner on Saturday night in Gettysburg. And, an additional side-note here: if you look for "dinner bodice/dress" images of 1860s dresses, you're going to find very little for 1860s. Fashion hadn't yet evolved into a highly specific outfit for every single possible occasion, like you'll find later in the century. Most of the ladies in my group who made new dresses, chose to make some variation on a low square neck, but it's honestly more because we associate that with later-dated dinner dresses than because it really has codified that much in the 1860s. (And of course that's all an ideal anyway, as changing dresses five times a day isn't really something your average woman can afford...) 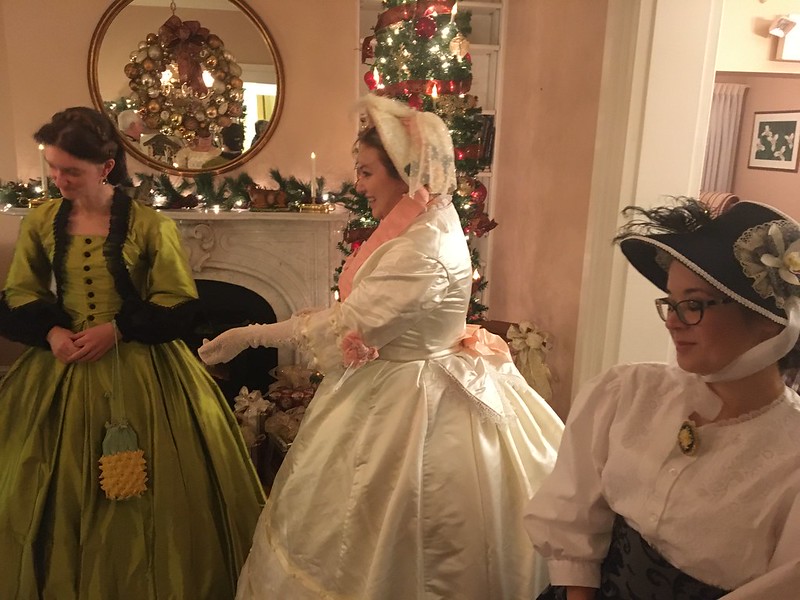 Anyway. I chose this dress as inspiration (you may recognize it from Patterns of Fashion as well), as in my mind it was a good compromise between looking a little fancier for a nice dinner but still wearable for a day bodice. (Although I also had started a high-necked coat-sleeve bodice out of the silk for last Remembrance Day, and have plenty to make a ball bodice as well, should I want one later!) 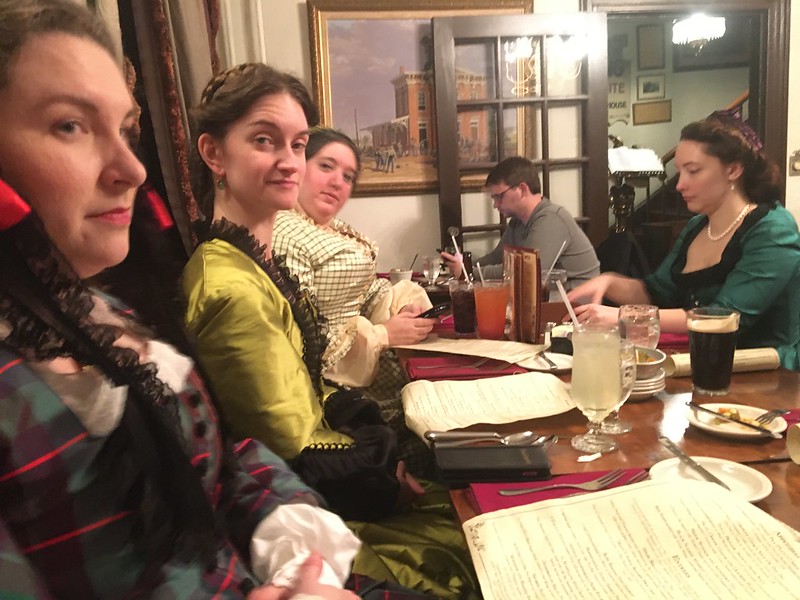 I have almost no construction pictures, as is usual these days, alas; nothing unusual here though. It's flat-lined in cotton broadcloth, with the main sewing done by machine and the finishings done by hand.

A couple of fun things: I managed to make the bodice overlap with the wrong side on top, and only realized after I'd trimmed the excess off to make that irreversible. And I'd already put the hooks and bars on by then. Would have had to take off and recut the fronts. Nope. Not happening! I also forgot to bring the piping with me to the sewing day where I had planned to make and attach the sleeves. Ha ha ha, guess the armscye isn't gonna get piped, then!

By far the worst of the "fun things", though, was the fact that the bodice came out FAR too big in the bust, despite the mockup fitting just fine. Gotta love when bodices do that! Super fun. It went in the naughty pile for a while after that, and I worked on other things...but eventually I realized I could take a huge ugly vertical tuck in the fronts and hide it under the trim by taking little tiny top stitches by hand, and no one would ever notice! Actually I almost forgot about that while doing this writeup and have had to come back and add it in...so I suppose it was effective? 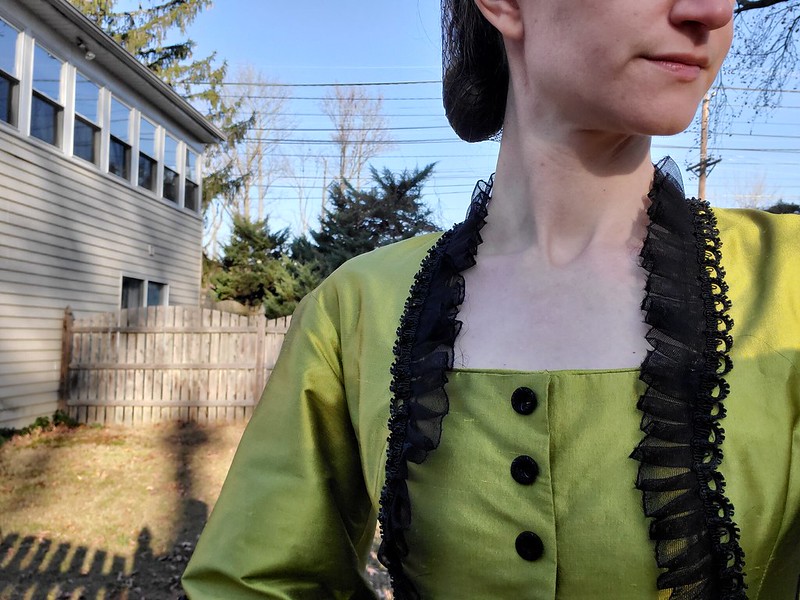 The loopy black trim is a mostly-poly clearance trim from Joann's - again, bought years ago and stashed, because I saw it and instantly said OOO 1860s! Typical Joann's quality, too...it's missing the inner loop here and there. Thankfully there aren't any missing loops in really obvious places, like the CF... 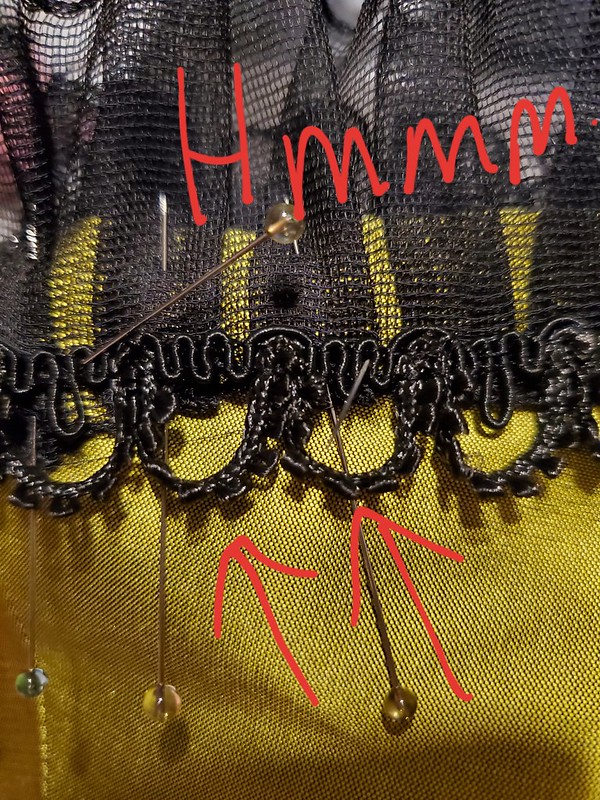 The pleated black netting is rayon netting that I zig-zagged the edges on the machine. I know...the horror. But I did not have time to do all of those hems by hand; it still took a couple of hours to stick 'em through the machine! Ugh. 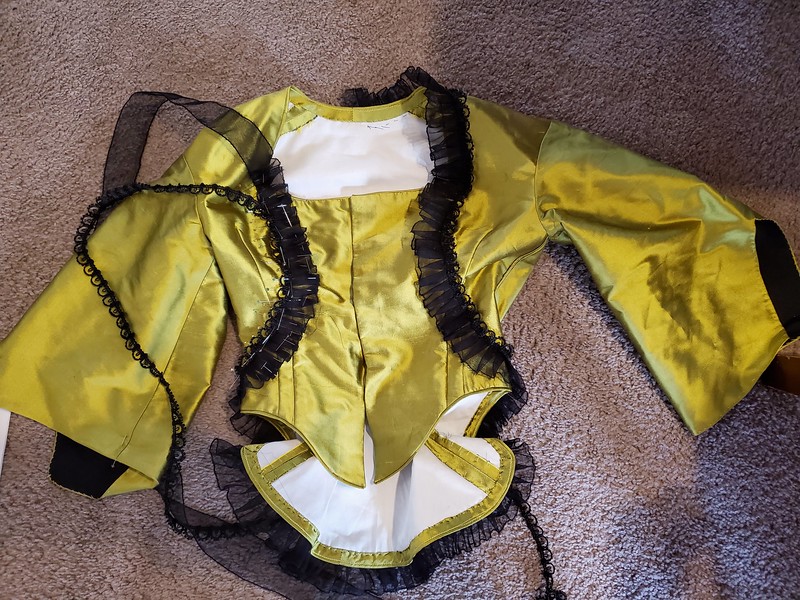 I managed to not take advantage of the really lovely 19thc house/B&B we stayed in for photo backdrops that evening, so went outside earlier this week to take rather bad full length photos of the thing. Not much to document other than there is a skirt, it does exist... 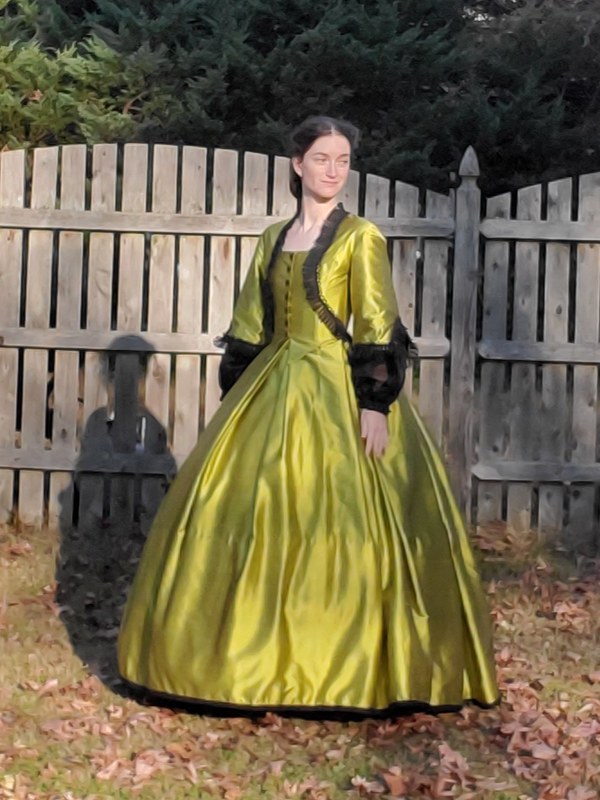 I did and do plan to do horizontal rows of the loopy trim on the skirt, it was just not getting done for the initial wearing. Which turned out to be an alright thing, as the skirt ended up getting very rained on that night! Not to mention it was under a dinner table during most of the time it was worn, anyway. 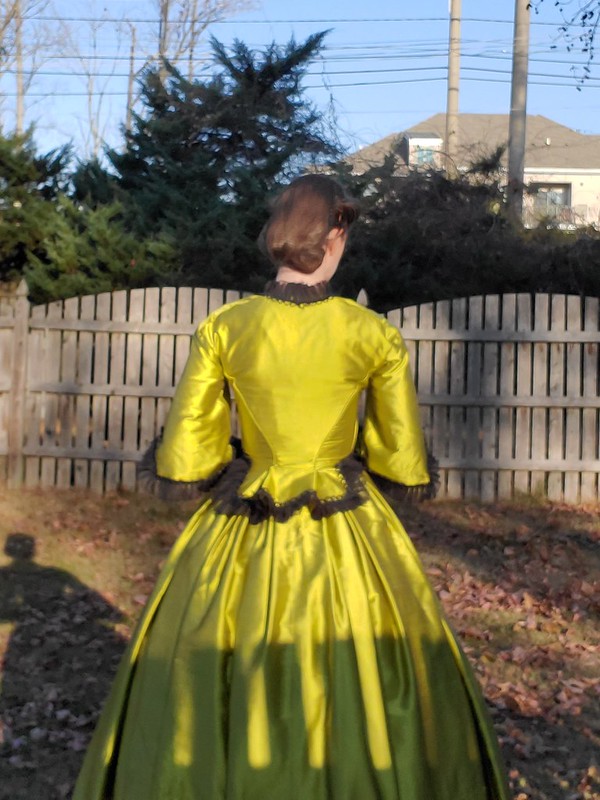 I did face the hem (more cotton broadcloth), and bound it in black cotton twill tape. Wool braid's really more correct but I haven't yet been able to convince myself to pay that much for something that's going to just scrape the ground! It would hold up better than cotton, of course, but these dresses generally get worn about once every two years, so...durability's not my biggest concern either. 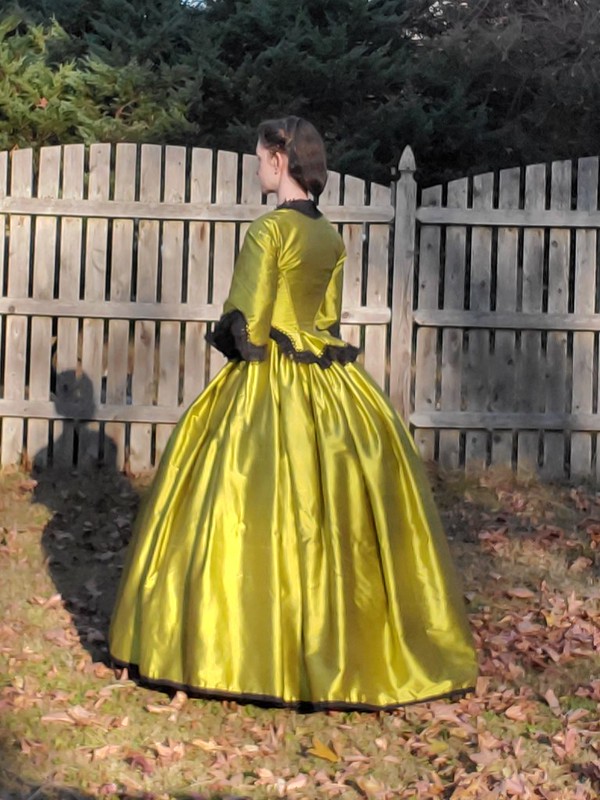 The undersleeves are just big tubes of black silk organza, gathered down to lace cuffs, and tacked into the armscyes. Easily interchangeable for regular undersleeves if wanted. 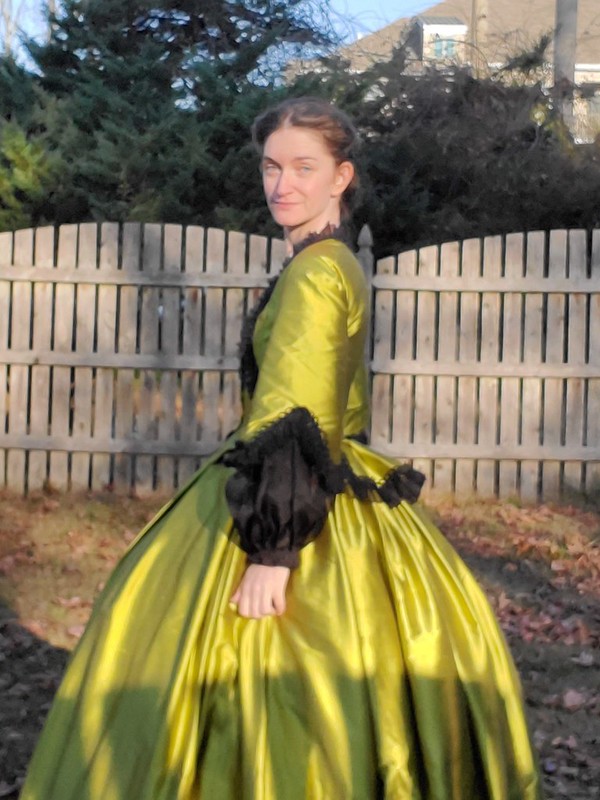 So there will someday be an accompanying coat-sleeved bodice and maybe even a ballgown bodice, although those will probably come around in 2021 at the earliest! Up next I think will be the satin ballgown retrim, since that's an easy writeup...
Source: mandierw