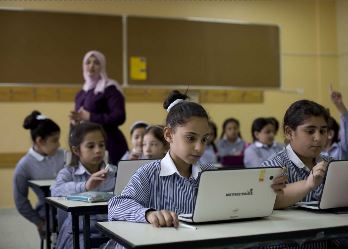 RAMALLAH, West Bank — As the teacher pointed to the large touch screen, her first-grade classroom came alive. With the click of a link, an animated character popped up on the screen, singing and dancing as it taught the children how to read.

The day’s lesson was the Arabic letter “Raa,” and the screen displayed cartoon pictures of objects that contain the letter — desert, chair and pomegranate — as the teacher asked the children to come up with other words. The students smiled and sang along.

Just a few years ago, such scenes were unthinkable in most Palestinian classrooms. Like elsewhere in the Arab world, schools in the Palestinian territories have traditionally emphasized memorization and obedience over critical thinking and creativity.

With an eye to the future, some Palestinian educators now hope the use of technology and the arts will create new opportunities in a society that has produced large numbers of unemployed college graduates.

“The students don’t need to memorize things. They need to understand first,” said Ruba Dibas, the principal of the Ziad Abu Ein School in the West Bank city of Ramallah. “Then they need to express their understanding through writing, speaking, drawing, acting.”

Ziad Abu Ein is one of 54 “smart teaching schools” introduced in 2017. The following year, the number tripled. By 2020, all 1,800 public schools in the West Bank are to be part of the program.

Dibas said the goal is to eliminate testing from the classroom. Instead, she said students need to enjoy the learning process to absorb information.

In a fifth-grade classroom, each child had a tablet and the teacher guided them through an Arabic lesson, using her own tablet to give assignments. Third-grade students went to the smart board, playing a game to learn the multiplication table.

In other classes, students drew cartoons to learn the physics of how airplanes fly. An English class did a project about evaporation.

Four third-graders recently learned about self-esteem in a lesson called “learning by drama.” They performed a short skit about a shy girl who discovers a passion for journalism and grows up to become a successful reporter.

Their teacher, Sawsan Abdat, said the children learned an important lesson that day — that they need to find what they are good at.

After initial skepticism from parents last year, enrollment at the school has nearly doubled. This year’s first grade has nearly tripled to 43 students.

“I love the school,” said Malak Samara, a 9-year-old fourth grader. “We learn and enjoy. We learn and play.”

These techniques are a radical departure from a system in which generations of students were forced to memorize information and cram for exams under the stern watch of an authoritarian teacher who in some cases would beat them with a stick if they could not complete their work.

But with the unemployment rate for new college graduates hitting 56 percent, according to the Palestinian Statistics Bureau, officials realized that something had to change.

Youth unemployment, particularly among university graduates, is a major problem across the Arab world. It was considered a driving force behind the Arab Spring revolutions that rocked the region in 2011.

Arab governments used to absorb new graduates, often in civil service jobs, but they can no longer afford to do that, in part because of the region’s “youth bulge.”

“There is no greater challenge facing the MENA region in its efforts to build a future based on inclusive growth than job creation,” the International Monetary Fund said in a report last year. It noted that 60 percent of the region’s population is younger than 30, the world’s second-youngest after sub-Saharan Africa.

“Pressures on the region’s labor markets are rising. In the past five years, the region’s working-age population increased by 50.2 million, and 27.6 million people joined the labor force. Yet employment increased by only 25.4 million,” it said.

Others in the Mideast have tried to make similar changes. In Egypt, the largest Arab country, the Education Ministry last year provided students with tablets, along with a new curriculum that enhances critical thinking.

The ministry said it is also trying to improve the level of instruction by increasing training and wages for teachers, building more classrooms and creating a more modern classroom through digital learning facilities. The government in 2018 secured a $500 million loan from the World Bank to help fund the reforms.

For now, it appears to be too soon to say whether the reforms can make a difference.

The region’s authoritarian governments might encourage education reforms as an economic necessity but could balk in the future at efforts to nurture a new generation versed in critical thinking. In the aftermath of the Arab Spring, governments in the region have increasingly stifled expression.

Schools across the Arab world face other obstacles as well. A 2015 study by the U.N. culture and education agency UNESCO talked about chronic underfunding, a lack of qualified teachers and increased class sizes throughout the region.

Syrian schools have been devastated by civil war, while many schools in neighboring Lebanon have been overwhelmed by Syrian refugees. U.S. cuts in funding to the U.N. agency for Palestinian refugees have jeopardized the school year for some 500,000 students, most of them in the West Bank and Gaza Strip. And Israel’s half-century occupation of the West Bank, along with a decade-long blockade over Gaza, stifled the Palestinian economy.

“Education in the Arab world is in a very bad condition. The salaries of teachers are very poor, the classes are overcrowded, and schools lack the essential infrastructure,” said Saeda Affouneh, director of the E-Learning Center at al-Najah University in the West Bank.

She praised the changes taking place in Palestinian schools.

“But this new system faces real challenges in the Palestinian schools,” she warned. “They need to train the teachers and to provide the proper resources.”