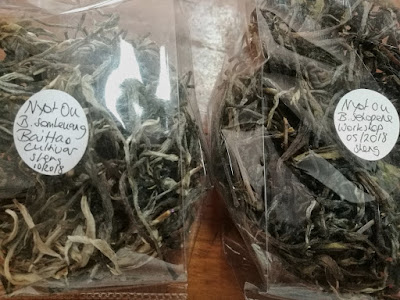 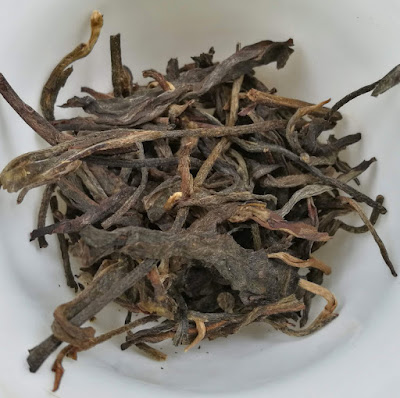 I met Anna of Kinnari Tea of Laos not so long ago and she passed on some really interesting looking teas.  I don't remember the background of this one so clearly, but as I recall it was from an NGO led development project in the Phongsaly area, not made after any processing tutorial for local farmers (part of what that was about), instead representing their prior production techniques.  Sounds good.

It seems there should be more about Laos tea, development issues, or Anna, but I planned to skip that this review.  I wrote more about all that in this post.  Since Anna keeps a moderately low profile online the posts never really go too far into her bio, or show much of her.  I could mention that she's been developing a commercial kombucha product line over the past year in Laos; that's different.

A Facebook page is probably as good a place as any to try to check on that.  And to ask her about getting ahold of some Laos teas.  Why wouldn't someone be interested in Laos teas, and why wouldn't they want to bother her about it?  She's a tea enthusiast first and a vendor second; that helps, and that distinction will be familiar to many. 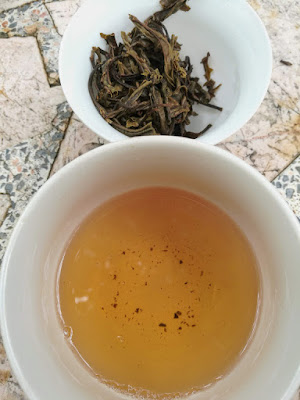 Before even trying the tea (after tasting the rinse, actually) the color looks unusual; this tea has oxidized some.  That's the thing with unconventional sheng processing, common in some versions throughout South East Asia (outside China); the inconsistency can make for pleasant surprises or shifts in methodology that don't work so well.

I just shared some of a Vietnamese sheng with Anna that she said seemed like green tea to her.  That would explain why it's supposedly three or four years old and not really age-transitioning.  I like that tea, but it is unusual.  I reviewed that tea here; it's odd how much South-East Asian sheng and black tea I've tried and reviewed this year.  I'm not sure I consider myself some sort of regional specialist but no one else is trying more, I wouldn't think, including vendors.


This one is nice.  The flavor is a bit warm, as young sheng goes, but it works, at least this early on.  That touches on warm mineral tone, versus a range that's more commonly lighter and towards flint / limestone.  Of course that kind of difference varies by source region, among other things.  Cedar stands out; that can be nice.  There's plenty of additional complexity to give it a nice balance, moderate bitterness, decent sweetness, all the usual.  The feel is slightly dry but it still works; being a bit structured is fine, versus rich and smooth.  It certainly doesn't seem like a black tea (related to the color, to it probably oxidizing a little).  Part of the rest seems floral; it covers a good bit of range for aspects.

Different forms of being off the norm in sheng processing tend to cost a tea in terms of aging potential, as I already mentioned related to that other tea's case.  That doesn't matter when drinking one young, as in trying this.  Since both white teas and sun-dried black teas (shai hong) can improve and transition in interesting ways with age it wouldn't necessarily always be true of variations; some might retain novel forms of aging potential.  One might want to guess that overheating a tea in processing, or heating it for too long, would make it more like a green tea, and that wouldn't work as well for aging potential, but I'm not sure that green teas can't age in ways that are positive in some cases.  Conventional wisdom definitely makes that claim though; that counts for something.

I'm not clear on why letting a sheng oxidize a bit during processing would necessarily be a bad thing; it might just change the character.  There would be less of the compounds present that transition to other forms through a more complete aging process, so maybe in the longer run it wouldn't be good, related to the form of a version that's 15 years old.


This is even more intense along the same lines the next round.  Warmth picked up a little, as did dryness in that feel.  Sweetness and bitterness are still working out, balancing those parts of the experience in a reasonable way.  Aftertaste is pleasant, that warm mineral and cedar range (or maybe redwood; I might mix up those more aromatic woods).  I'd go with judging floral tones to fill in depth from there, but those are harder to make out for being less pronounced.

I might mention that I don't think Anna will sell this tea.  That's odd, isn't it, a tea turning up that's just not available?  Closely related Laos teas will be on the market soon enough, just maybe versions produced after they tweaked processing, and put the new facilities developed there for that into practice.  As I'd mentioned before William Osmont of Farmerleaf is also supporting those Laos development efforts; a related tea might turn up there.  This version isn't a can't-miss experience anyway, but it is interesting, novel, and pleasant.  It's nice tea.  I like it as much as some teas I've bought off established vendors presented as intermediate quality, relatively higher value versions, as teas that cost in the range of $70-90 per cake, with the typical back-stories attached in support of that. 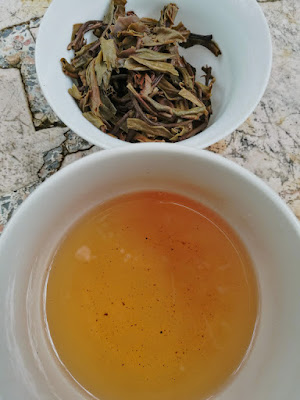 On the third infusion sweetness picked up a little and flavors shifted some.  I was drinking some varied source area black teas yesterday; it's not like that.  It's also not exactly typical for young sheng, although given how much those vary that isn't a meaningful thing to say anyway.  Some are a lot like this.  The range I'm interpreting as warm mineral and cedar is expanding to include tree bark, a thicker, softer, richer form of those, and gaining depth, along the line of a dry autumn forest floor.

Floral tone is still there, in the background for being a supporting element, while usually that stands out as a high note instead, as a main aspect feature.  With this being so sweet it might be natural to flag that as something fruit related instead, like nectarine at this point.  With these different-range dimensions combining interpretation is trickier; the complexity is nice.  Other than the mineral dryness it's quite clean in effect, and I don't see that as muddled or off.  Swap that out for a richer, thicker feel and this would really be an exceptional tea, but as it is it still works.


More of the same on the next round (4, I guess).  This might be an interesting tea to age a little since although it doesn't have excessive bitterness or astringency that would improve by fading there is some of each, and the astringency present is in an unusual form.  The other sweetness and flavor potential might be really interesting in another year or two.  It would seem a gamble to set this aside for a decade, but then that's how that goes in general, until someone is really familiar with aging transition patterns.

This would have seemed a lot more bitter to me two years ago, before I stuck to drinking sheng versions over and over.  It doesn't necessarily transition directly to sweetness after you swallow it, the hui gan effect, but it has sweetness already, and that carries over in aftertaste.  It's unusual the way that dry feel doesn't leave your mouth in the aftertaste phase.  When that's a richer, thicker feel that effect is quite positive, and in this it's not positive or off-putting, just different.  That one aspect would be just as common in black tea, that slightly dry feel, or maybe more so.  At the same time this is most definitely sheng; the bitterness, other feel structure, aftertaste, floral range; it's all straight, standard sheng.  Even the aromatic wood tone, and pronounced mineral.


It's less dry the next round, although I can still tell that aspect is there.  The smoother feel works better.  Those flavors may be shifting a little in balance but it's not worth sorting out how; it wouldn't be meaningful.  It's nice the way that sweetness could really be tied to a fruit flavor (maybe a dried stone fruit); that matches well with the rest of the range.  It's enjoyable.  I'll probably only drink one more round due to doing a combined tasting yesterday and getting blasted on caffeine, an experience I don't care for.  I had stopped at just the right point, when it was just a little too much, but went back to try a couple more rounds not too much later, which was way too much.  Erring on the side of not feeling any of that today will seem nice.


This isn't changing that much (next round), and even if it is it's not doing so in an interesting way, just shifting around aspect balance.  That dry astringency dropping back works better, but it's at the point now where adding infusion time might come up, if only a little this far in (7 rounds or so).

It's positive and interesting tea.  She passed on three other versions, I think it was, that sounded really pleasant and even more novel.  I really should get more background on that source area before posting about that since those weren't from Phongsaly, as I remember, from the next province over instead.  From a different tea plant type for which the origin history has been lost, as I remember her describing it, probably one that came over from China around a century ago, but details about from where didn't stick in the oral history.  She said the flavor range is really unique; that should be interesting.

Some of her teas are so good that I can't drink them alone; it's a waste if I'm not sharing them, spreading out the experience to include others.  It's not a bad problem to have but some teas have stacked up a bit.