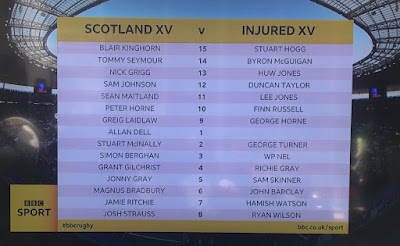 Reflections On A Plastering In Paris

LET'S BE honest here – all things being equal, Scotland should finish fifth every year in the Guinness 6 Nations. Whatever way you look at things: from the most-crucial, money, via playing numbers, infrastructure, whatever, fifth is our place.
Sure, we may be blessed with a key number of very good players arriving at the same time, or with a coach able to get the best of those players, but, these stars do not often align to allow us to have a real go at punching well above our weight and being genuine 6 Nations contenders.
IF our big players all play at the top of their game on the same day, and IF our lesser lights play above themselves, and particularly IF our opponents' leading lights under-perform, or they make selection and tactical mistakes – such as England did at BT Murrayfield last season – we can and often do win.
However, these rare successes tend to lead to another particularly Scottish sporting phenomenon – we get carried away – often totally.
We also, it has to be said, and this is happening right now – tend to get carried away when we lose. We love Rabbie Burns, and don't really get Rudyard Kipling. But, maybe:
If you can keep your head when all about you
Are losing theirs and blaming it on you,
If you can trust yourself when all men doubt you,
But make allowance for their doubting too;
If you can wait and not be tired by waiting,
Or being lied about, don’t deal in lies,
Or being hated, don’t give way to hating,
And yet don’t look too good, nor talk too wise:
If you can dream—and not make dreams your master;
If you can think—and not make thoughts your aim;
If you can meet with Triumph and Disaster
And treat those two impostors just the same;
If you can bear to hear the truth you’ve spoken
Twisted by knaves to make a trap for fools,
Or watch the things you gave your life to, broken,
And stoop and build ’em up with worn-out tools:
If you can make one heap of all your winnings
And risk it on one turn of pitch-and-toss,
And lose, and start again at your beginnings
And never breathe a word about your loss;
If you can force your heart and nerve and sinew
To serve your turn long after they are gone,
And so hold on when there is nothing in you
Except the Will which says to them: ‘Hold on!’
If you can talk with crowds and keep your virtue,
Or walk with Kings—nor lose the common touch,
If neither foes nor loving friends can hurt you,
If all men count with you, but none too much;
If you can fill the unforgiving minute
With sixty seconds’ worth of distance run,
Yours is the Earth and everything that’s in it,
And—which is more—you’ll be a Man, my son!
Then:
O wad some Power the giftie gie us
To see oursels as ithers see us!
It wad frae mony a blunder free us,
An' foolish notion:
What airs in dress an' gait wad lea'e us,
An' ev'n devotion!
Certainly, some (some might say many) Scots treat Triumph and Disaster the same, going totally overboard either way. No disaster is bigger than a Scottish sporting one (think 9-3 or 44-0); no triumph (the Wembley Wizards, or winning the Calcutta Cup last year, beating the Netherlands in 1978) greater. Either way, we go overboard.
And boy, but some of us have gone overboard since yesterday. I had a quick look at the Scottish Rugby Forum on Facebook, at half-time yesterday. And there they were: posts demanding Gregor Townsend immediately hooks Greig Laidlaw; other posts calling for Toony's head. Get so-and-so off, and such-and-such on – in mid-game FFS!!!
Yes, yesterday was a terrible day at the office for Scotland. Sure, we were a poor second to a resurgent France. But, was losing in Paris so-much of a shock? We haven't won there in 20 years, and indeed, overall, since the end of World War II, we have won just seven times in 36 visits to Paris, with that win in 1999 our only success there since the game went Open.
Why the surprise, there were moments, in the first half against Wales and late on against England, when France showed, they were not that far away from winning. Should we have been surprised, given our injury crisis and our record in Paris, that that win came at our expense?
For me, without being able to argue too-vehemently against the team he selected, I thought what a poor hand fate had dealt Toony. With everyone fit, at least eight – more than half – of our starting XV would, I suggest, not have been on the park at kick-off. You cannot go into a major international with that many second or third choices in your team and reasonably expect to win.

EDIT: I saw this graphic on the Wings over Scotland website, after I had posted, and thought, this sums things up nicely.

I would put Gordon Reid in at loosehead, to fill the vacancy, and Mark Bennett in for Huw Jones,  then, I reckon, the Injured XV would beat the one which did take the field.
Not that I absolve Toony from all blame for the defeat. Selection is all about opinions, and, while I have mine – I am not picking-up Mr Townsend's large salary to get it right, but, yesterday, he got one or two calls wrong.
I hope he has more first-picks back for the Welsh and English games. I also hope he gets his selection right. However, more-importantly, I trust the players he trusts don't make as-many errors in thought and execution as they made yesterday.
We undid ourselves, as much as anywhere, by the embarrassingly large number of unforced errors we made: passes not given or taken correctly, wrong options chosen. To give you just one: in the lead-up to that last French try in injury time – Adam Hastings, back to the touch line, catches the attempted line kick, but, he has both heels on the line, so, the ball is in touch, France gets the line-out and scores.
Suppose Adam had caught the ball, facing touch, feet in-play, the manner a guy used to playing fullback or wing and being in that situation might, then Scotland had the whip hand. We could have tried a length-of-the-field drive for another try of our own, and a losing bonus point, or, he could have kicked the ball out of play to end the game – either way, still a loss, but, not such a bad one.
International rugby is fine margins, and there was one.
Any way, important though the 6 Nations is, the BIGevent in 2019 is the World Cup. I'd rather see us struggling now than then, we now have time to regroup and recover. We can: always look on the bright side of life. But, being Scottish, it will more-likely be a case of: furrit tho' Ah canna see, Ah guess and fear.
Scotland – here's tae us, wha's like us? Damned few, an' they're awe deid.
Source: scottishrugbyphilosopher

Reflections On A Plastering In Paris