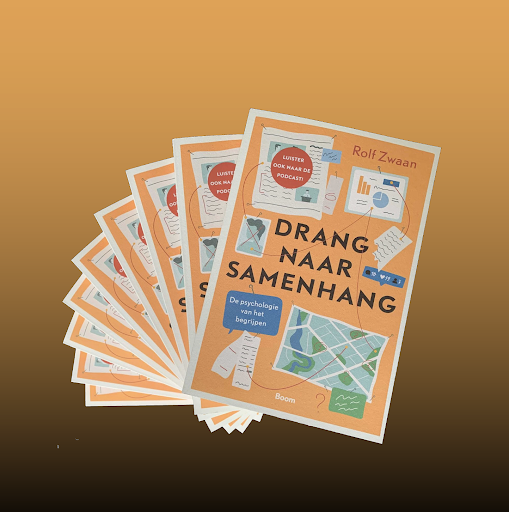 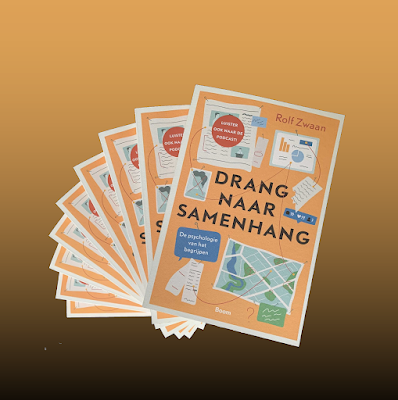 I wrote a popular science book. It is on comprehension and ranges from the understanding of words to the forming of conspiracy narratives. I wrote the book in Dutch. The title is Drang naar Samenhang: De Psychologie van het Begrijpen. An English translation would be Compulsion for Coherence: The Psychology of Comprehension.
Why did I switch to my native language, where it would have been easy—or maybe even easier-- for me to write the book in English? I had, after all, only written in English about comprehension before. There are several reasons for my linguistic U-turn.
First, I wanted to write something that the people around me would enjoy: Dutch speakers who might be interested in the topics I am discussing but won’t necessarily read a book in English. It is gratifying to receive messages and comments from people outside the field who find the book both useful and fun to read. I can’t say I have ever received such comments from people outside the field about any of my articles.
Second, although I very much enjoy writing in English, I thought it would be fun and a challenge to write in Dutch. And I was looking for something in the professional realm that was both challenging and enjoyable. I must admit that writing this book has been the most fun I’ve had professionally in a very long time. University bureaucracy has a way of grinding you down, as we all know.
The third reason is that I thought writing in Dutch would put me in a different, and hopefully refreshing, mindset. I found this to be very much the case. Benjamin Whorf would not have been surprised, I suppose.
The writing was already underway, when the pandemic hit. A major effect of the corona measures was that, along with everyone else’s, my focus narrowed (mostly) to my local surroundings. Writing in Dutch felt reassuringly appropriate in this situation.
But now on to the main reason I’m writing this post. A disadvantage of having written the book in Dutch is that many of the researchers I thank in the acknowledgements will not be able to read them. Maybe there will be an English translation of the book at some point, but in the meantime, I want to at least translate the section of the acknowledgements that pertains to them. Sadly, some of the people I mention have already passed away. 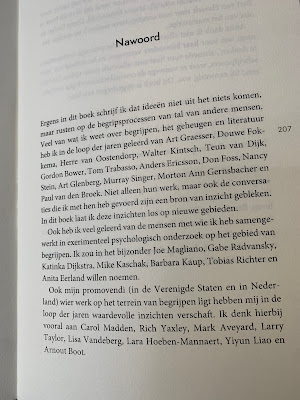 Somewhere in this book I write that ideas don’t materialize out of thin air but instead rest upon the comprehension processes of many others. Much of what I know about comprehension, memory, and literature I have learned over the years from Art Graesser, Douwe Fokkema, Herre van Oostendorp, Walter Kintsch, Teun van Dijk, Gordon Bower, Tom Trabasso, Anders Ericsson, Don Foss, Nancy Stein, Art Glenberg, Murray Singer, Morton Ann Gernsbacher, and Paul van den Broek. Not only their work, but also the conversations I have had with them have proven to be founts of insights. In this book, I am taking these insights into new domains.
I have also learned a lot from the people I have collaborated with on experimental research into comprehension processes. I am especially indebted to Joe Magliano, Gabe Radvansky, Katinka Dijkstra, Mike Kaschak, Barbara Kaup, Tobias Richter, and Anita Eerland.
I have also gained useful insights from the graduate students (in the US and the Netherlands), who have worked with me on studies involving comprehension. I am thinking here especially of Carol Madden, Rich Yaxley, Mark Aveyard, Larry Taylor, Lisa Vandeberg, Lara Hoeben-Mannaert, Yiyun Liao, and Arnout Boot.
Reading this translation makes me realize that had I written this in (American) English, I would have used more superlatives, but in Dutch this would sound weirdly over the top. Or maybe I'm just not a very good translator. At any rate, I trust everyone will know my thanks are sincere.
I have a sabbatical coming up, so on to the next book…
Source: rolfzwaan