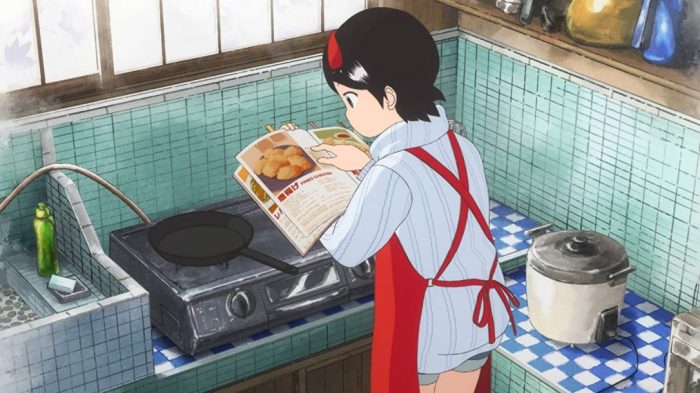 First Look at NHK’s Maiko-san Chi to Makanai-san (Kiyo in Kyoto: From the Maiko House)

NHK World-Japan has begun broadcasting the anime adaption of Koyama Aiko’s Maiko-san Chi to Makanai-san (Kiyo in Kyoto: From the Maiko House). With only 1 episode airing every month on the fourth week, the waiting period may be off-putting to those who might otherwise watch it. But with just this first episode, there’s so much to like! The beauty and refinement of maiko and the refreshing friendship between Su-chan and Kiyo can easily be garnered from just the trailer. You don’t have to be knowledgeable about or love maiko and geiko to thoroughly enjoy Kiyo in Kyoto. Here are our first impressions of a very promising anime.

How could we feel confident in a show based on just one episode without biting our nails waiting for the second? Kiyo in Kyoto feels much longer than its 25-minute runtime. Important scenes are played out at a slow pace with poignant silences and buildups of thought or emotion that help convey complicated feelings even without express dialogue. Well-placed flashes of events or conversations give us enough context to move us through time on to the next important scene. This formula moves us through multiple different scenarios and introduces characters and makes the episode feel so full. When there needs to be context for why Kiyo’s incredible feast is so important, we’re shown only seconds of Su-chan rushing out the door and gently refusing Kiyo’s advice to eat something. As dinner time quickly becomes morning, we understand Su-chan’s pattern of putting work over her health and why the Maiko house would be so conscious of it yet concerned about how to address it. So the focus becomes Kiyo’s thinking and the type of food she comes up with to feed the house and the warm reception it receives.

While the inner-workings of a Maiko house could either go super dramatic and cut-throat or be a very surface-level educational experience, we have something much more subtle. There’s not a lot of dramatic music or lighting or a tense atmosphere. Instead, the characters are shown with conflicted or troubled expressions with only a bit of dialogue to reveal the problem at hand. With the happy atmosphere that permeates most of the episode, the sudden vacant look in Su-chan’s eyes from not eating suddenly jerks us into a sense of foreboding. Kiyo doesn’t seem to notice but that dramatic moment lingers causing a sense of unease in the audience before once again being delighted by Kiyo’s thoughtful cooking.

Kiyo and Su-chan’s Friendship is Uplifting

Both from Aomori, childhood friends Su-chan and Kiyo dreamed of becoming Maiko and moved to Kagai but it was only Kiyo that made it on the path of Maiko. While this must have been a difficult moment for her, Kiyo isn’t shown reminiscing this part of her life. Other characters look back with either pity or reproach but Kiyo is too focused on her beautiful friend’s success to spare a thought for her own ‘failure’. Indeed, Kiyo is so gifted at preparing excellent food that it would be a shame for her to dedicate her attention to becoming a maiko. Su-chan admires Kiyo’s ability to plan and account for differing tastes and nutritional needs. Even when Su-chan can’t spare a moment to eat something, she makes time for her special friend who gives her strength. They both find the other to be remarkable and doing what they were born to do which makes their friendship so refreshing to behold.

Leave it to NHK to show something not only specific and educational on multiple fronts but in a way that is engaging for a wide audience. Su-chan’s overwork is not glorified and indeed becomes a source of worry for even the Mother of the house which is a good message for those thinking their health should be sacrificed for their goals. The interspersed scenes where Kiyo and Su-chan look something up together provide cute, fun moments that also help the audience learn about various food and cooking trivia. Even if it’s a month away, we’ll be waiting for the next episode of Kiyo in Kyoto: From the Maiko House. Let us know in the comments what you think of it so far!

First Look at NHK’s Maiko-san Chi to Makanai-san (Kiyo in Kyoto: From the Maiko House)