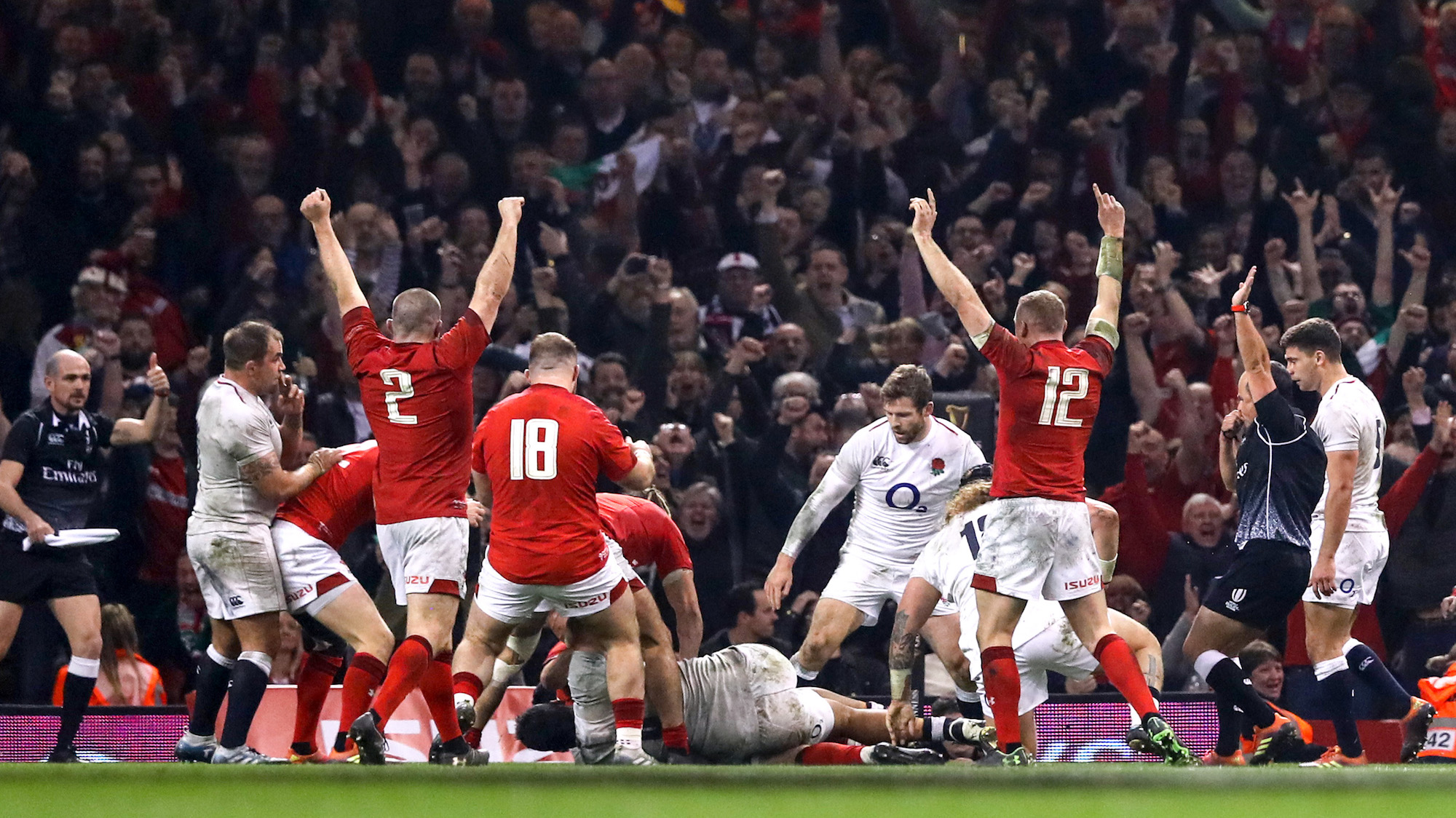 Warren Gatland barely celebrated as his Welsh team secured their place in history with stunning 21-13 victory over England in Cardiff. It didn’t really matter, as all around him were losing their collective heads.

Something’s gotta give bellowed the stadium announcer – and they weren’t wrong. Two unbeaten teams, Wales searching for a record 12th consecutive test victory and England seeking to win their sixth straight Guinness Six Nations match with their adversaries from across the Severn.

They say it’s lucky for Wales when the year ends in nine – with a run of seven straight victories against England stretching all the way back to 1949.

And so it was again.

This match marked two decades since Scott Gibbs denied England a Grand Slam at Wembley with his famous try, a score so seismic its reverberations still echo in the valleys.

And it’s fair to say that Cory Hill’s second half score will go down in similar folklore, as Gatland’s quest for the Grand Slam now heads to Edinburgh.

After the pre-match hymns and arias it was soon time for the blood and thunder, in the very best traditions of his storied and intense rivalry.

England’s Elliot Daly sent an early penalty chance wide and short as charge down followed knock on, punctuated by wave upon wave of juddering tackles.

Both teams kicked and chased with little reward until Owen Farrell broke the deadlock with the first of two penalties, after Kyle Sinckler’s hustle had forced Rob Evans into an error.

Gareth Anscombe levelled from in front of the posts but the match was increasingly an aerial battle, with both sides ground forces cancelling each other out.

And then, quick as wink, England sprung from their beachhead and breached the red line, Courtney Lawes catching Wales napping before Henry Slade released flanker Tom Curry for an opportunist 27th minute score.

There was increasingly a swagger about the visitors, underlined by an eye-catching moment of Jonny May brilliance. He chasing down his own kick from deep in Welsh territory and then bundled Hadleigh Parkes into touch. He punched the air like he’d just dotted down under the posts – it was to prove England’s last big moment.

Wales had their share of possession but England made 41 more first half tackles to underline why they were good for their seven-point half-time advantage.

Unsurprisingly the first half pressure gauge dropped after the interval as both sides struggled to find their momentum, Anscombe reducing the deficit to a single point with back-to-back penalties.

England were suddenly desperately needing a spark, Manu Tuilagi giving them a lift with a burst from midfield before Farrell’s boot secured the visitors some breathing space.

For all the Welsh possession they had still struggled to threaten England’s line until they camped inside their rivals’ 22 midway through the second half.

The visitors steadfastly repelled increasingly frantic red shirts for an incredible 34 phases until Hill found the perfect angle to crash over, Dan Biggar threading the conversion for a three point lead. Cue bedlam.

England saved their winning score to late on their last visit to the Principality Stadium but there was to be no comeback and no glory this time.

And Wales made the game safe as Biggar’s cross field kick was brilliantly gathered by Josh Adams as England full-back Daly could only flail around.

After Jonny May’s heroics against France, all eyes were on the Leicester winger again. There was one flash of brilliance late in the first half but his threat was largely negated by a brilliant second half defensive performance by Wales.

No doubt about this. Wales had barely threatened England’s line for the first 60 minutes but after more than 30 phases of being repeatedly smashed by white shirted defenders, Cory Hill rewarded their patience with a try that sent the home crowd delirious. It’ll be one they replay in these parts for years and years.

Man of the match