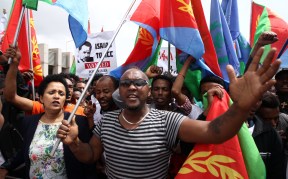 On a continent as vast and diverse as Africa, there are no simple narratives on freedom and human rights. Like many places in the world, there are hopeful trends and success stories, but also worrisome trends and signs of backsliding.

On November 20, the Africa Security Initiative at Brookings hosted a panel on trends in human rights — defined as the legal protections and rights of persons — across the African continent. Senior Fellow Michael O’Hanlon opened the discussion by acknowledging the broad scope of the topic, given the number of countries on the continent. In addition to highlighting key human rights issues in Africa, the panelists discussed global trends in the fight for human rights, and the role of NGOs and governmental institutions in advancing the protection of these rights within the continent.

Stressing the rise of liberation movements in Africa, Jon Temin, director of the Africa Program at Freedom House, noted that since 2015, there have been 26 transfers of power on the continent. He cited “the most recent really interesting story [of] Sudan” as an example of “a remarkable change in leadership, with President [Omar] al-Bashir leaving several months ago, and now in prison and potentially awaiting some sort of trial.” Temin also cited Ethiopia as a country with hopeful trends.

Recent movements have challenged established governments, demanding better governance and even a change in leadership. Whereas the use of social media has been a contributing factor to many of these success stories, Mausi Segun, executive director for Africa at Human Rights Watch, emphasized the magnitude and effect of the youth bulge in Africa, saying: “We have really restive young people who understand the power that they hold as citizens, who know their rights, and are willing to face off any kind of military or harsh clampdown from the government.” Most predominant within the movements advocating for human rights in Africa is the youth population.

As activism grows, there are also efforts on the part of some governments to crack down on organizations and individuals fighting for human rights and other political liberties. As Tiseke Kasambala, chief of party in Freedom House’s Advancing Rights in Southern Africa Program, pointed out: “We’re seeing now the introduction of cybercrime, and cybersecurity laws and this, of course, is designed to prevent the type of organizing and mobilization of social movements, and civil society organizations on the ground.” The passage of such restrictive laws under the guise of national security and the quest for more transparency is becoming a growing trend. She cited Uganda and Tanzania as concerning examples. According to Temin: “There are 12 different countries in…Sub-Saharan Africa, that over the last 15 years have adopted various versions of repressive NGO legislation that seeks to constrain their registration [and] their funding sources.”

However, in a number of these cases, individuals and organizations have been able to fight back through institutions such as the judicial system and independent electoral commissions. Kasambala cited Botswana, “where strong institutions led to the proper management of resources.” Temin also highlighted institutions in Ghana as an exemplar in terms of governance and human rights. “If you look at the election commission in Ghana — which at this point is a pretty strong, independent entity — it wavers sometimes, but for the most part has overseen five elections of pretty good quality, and improving quality.”