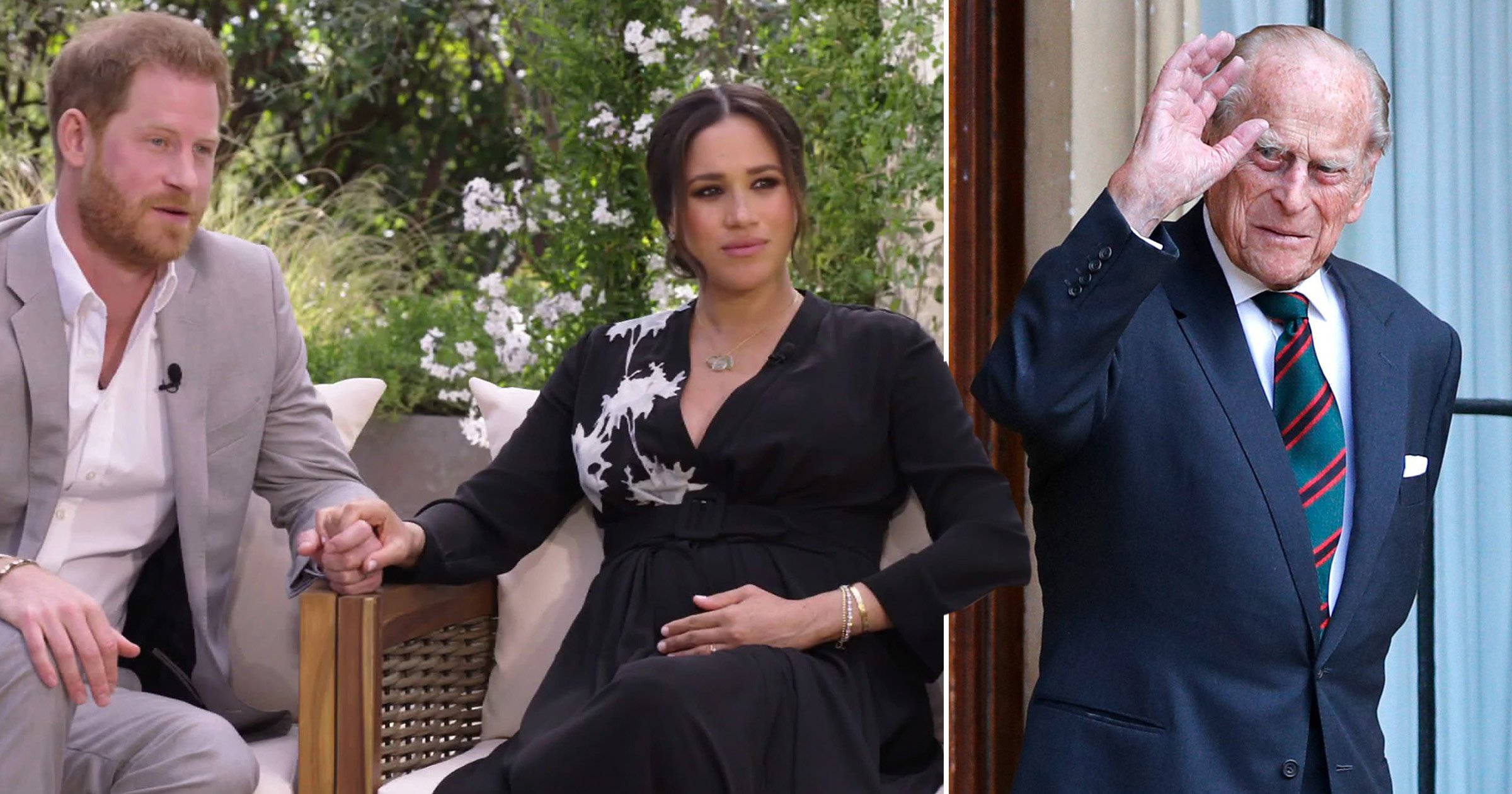 Producers are said to be refusing to pull the 90-minute CBS special, which has the potential to detonate a ‘diplomatic bomb’, given the Duke of Edinburgh’s condition.

Philip, 99, was admitted to King Edward VII’s hospital in central London on February 16 on what Buckingham Palace said was a precautionary basis.

But yesterday Harry’s grandfather was transferred by ambulance to St Bartholomew’s Hospital for testing and observation for a pre-existing heart condition, along with treatment for an ‘infection’.

It came just hours after two teaser clips of Harry and Meghan’s interview with Oprah were released, promising ‘shocking’ revelations about the couple’s life in the Royal Family.

Harry, 36, and Meghan, 39, are facing calls from royal commentators to ask either CBS or Winfrey to postpone the release of the interview due to the Philip’s health, with one saying it would be ‘heartless, thoughtless and supremely selfish’ to go ahead with it.

It is not known whether the Duke and Duchess of Sussex have asked for the ‘primetime special’ to be pulled, but one TV insider claimed it would be aired regardless.

They told the Mirror: ‘CBS has sold millions of dollars worth of advertising around the interview, but bosses are aware of the delicacy of the Duke’s heath.

‘They have no loyalty to the Royal Family, although some feel as though they do to Harry and Meghan.

‘For it to run if Philip’s condition worsened would be like setting off a diplomatic bomb. It would be grossly insensitive and hugely disrespectful.’

In the two trailers for the interview, Harry says he had to take his family to LA as he feared ‘history repeating itself’, believing Meghan would suffer the same fate as his late mother Diana.

With the couple expected to be ‘candid’ about tensions within the Royal family and their war with the British press, Winfrey suggests Meghan’s time in the UK was ‘almost unsurvivable.

Holding hands with his wife outdoors in a location understood to be Santa Barbara, California, Harry says: ‘You know for me, I’m just really relieved and happy to be sitting here, talking to you, with my wife by my side.

‘Because I can’t begin to imagine what it must have been like for her, going through this process by herself. All those years ago.

‘Because it’s been unbelievably tough for the two of us, but at least we had each other.’

‘I just want to make it clear to everybody there is no subject that is off limits. Almost unsurvivable, sounds like there was a breaking point.’

The Queen was said to have been ‘blindsided’ by Harry and Meghan’s upcoming interview, due to air on Sunday, as her grandson failed to warn her about it, according to reports.

Protocol usually dictates that Royal Family members get the Queen’s blessing ahead of a television interview.

But Harry and Meghan, 39, who last month confirmed they would never return as working royals, reportedly kept the deal secret from the monarch.

Public relations and crisis consultant Mark Borkowski warned that Harry and Meghan are at risk of a ‘real reputational mess’ if they go ahead with the broadcast.

He said: ‘The timing is just horrendous. Anybody who looks at this through the optics of a caring family, even a family who are estranged from one another, it’s very uncomfortable as you edge towards Sunday.’

ITV has reportedly won the bidding war to screen the interview in a deal said to be worth around £1million, according to MailOnline.

After airing in the US on Sunday, the interview is expected to be shown in the UK on Monday, March 8.

Mr Borkowski added: ‘Harry and Meghan are supposed to be a sensitive, caring and empathetic brand… but they’re going ahead with this juggernaut.’

If Philip’s health were to worsen, Mr Borkowski said Harry and Meghan’s fate would be ‘in the lap of the gods’.

Boeing 727 taken for a drive down the M5

He added: ‘If you were strategically giving advice about mitigating reputational damage, you would show huge empathy by postponing.’

Mr Borkowski said a deterioration in Philip’s health would also raise serious issues for ITV as to whether the screening should go ahead in the UK.

He added: ‘I think brands have to take a considered view about whether they want their advertising anywhere near this.’