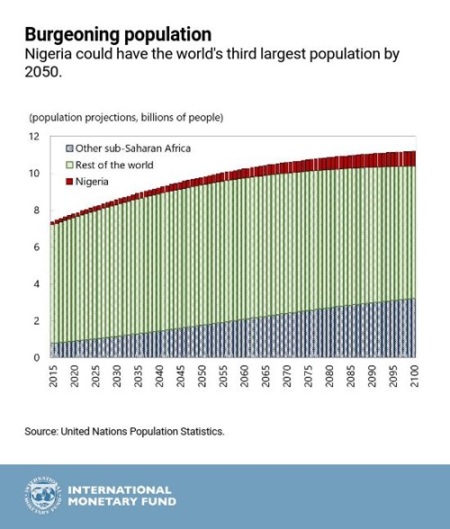 Nigeria has just had a general election to elect a new president and Congress. Nigeria is often ignored in the global scheme of things.  But it is the largest country in Africa with around 200m in population and a larger national output than South Africa. It is rich in natural resources (especially fossil fuel energy) and its people.  But it is appallingly poor.  Nigeria is the prime example of a country, fashioned by imperialism from various original large tribes originally for the slave trade and later into a state for the extreme exploitation by multi-national companies.  The Nigerian elite (based on the military and oil businesses) has taken its cut from this exploitation and rules through patronage, corruption, and in the recent past by outright military dictatorship.

For the last 20 years, however, there has been a semblance of democracy, with ele ctions for governments.  But this democracy is relative.  In the mainly muslim inland north-east, there is a bitter battle going with Islamic terrorist groups (Boko Haram) who seek to impose strict Islamic rule over swathes of part of Nigeria.

But at least, in 2015, the last president of Nigeria, Goodluck Johnson, conceded defeat to the current President without trying to stay in power using the military and chicanery- for the first time in Nigeria’s chequered history..  The general election this time pits the incumbent Muhammadu Buhari (76 years), of the governing All Progressives Congress (APC) against the opposition People’s Democratic Party (PDP) led by  Atiku Abubakar (72 years).  The APC purports to be a centre-left party opposed to austerity and in favour of better conditions for Nigerians, while the PDP advocates neo-liberal pro-market, pro-oil company policies.

Buhari’s platform is “to be tough on insecurity and corruption” (which ironically was little changed under his presidency), and he wants to complete much-needed infrastructure projects. Abubakar is a pro-business free marketeer whose main pledges have been to privatise giant state-run companies and float the embattled naira currency.  In practice, as in the US, there is little to choose between the two main candidates. Both men are from the mainly muslim north of the country which is where Buhari gets his support; Abubakar gets his from the south and south-east.  The mega-city Lagos with its urbanised 20m swings between the two parties and will decide the result.

Both leading candidates are muslims by religion and both intend to do nothing to change the nightmarish poverty and inequality in Nigeria, or even to establish equality before the law and protect human rights.  As one middle-class urban voter put it: “They [Abubakar and Buhari] are both terrible people and not fit to be president … I don’t think Atiku will bring any real change if he wins. And all the ‘experience and leadership’ they’ve sold us at all levels, what has it brought us really?”

While they are in their 70s, more than half of Nigeria’s registered voters are under 35.  Nigeria is a youthful country with a very fast growing population.  Indeed, on current trends, Nigeria will double its population to 400m by 2050 and by any stretch become the most important state in Africa.

Young people (0 to 19 years of age) account for more than 54% of the population and their conditions are dire.  Currently nearly a quarter of the working age population is unemployed, while the youth unemployment rate reached an all-time high of 38% in the second quarter of 2018.

The Nigerian economy is a one-trick pony, as are many in Africa controlled by imperialism.  Oil and gas production dominates; so all depends on the price of oil globally. 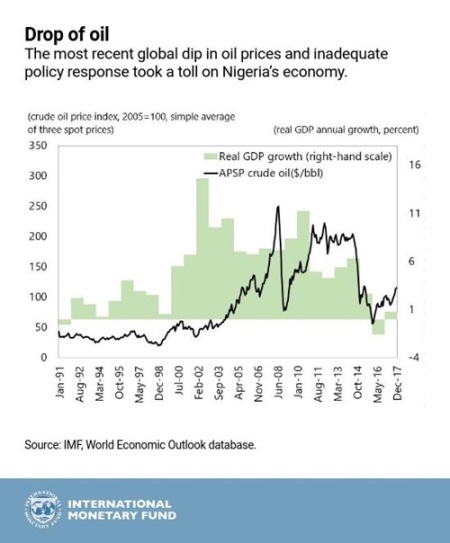 The Nigerian capitalist economy operates mostly for the foreign multi-national oil companies.  There is little investment outside of energy.  Overall investment to GDP moves with the vagaries of the crude oil price and since the sharp fall after 2010, it has fallen to a 20 year low.

Investment in any capitalist economy, including Nigeria, depends primarily on its profitability.  It is difficult to get decent data to measure the overall profitability of Nigerian capital.  But using the Penn World Tables, I reckon it looks something like this.

The profitability of capital seems to follow closely the price of crude oil, demonstrating again that the Nigerian economy is imbalanced and structured to benefit only international oil, and not even domestic capital.  In the boom period for the oil price in the 2000s, GDP growth took off and the rate of profit on capital (on my measure) rose 60%.  But since 2010, the oil price has halved and Nigeria’s real GDP growth has disappeared. 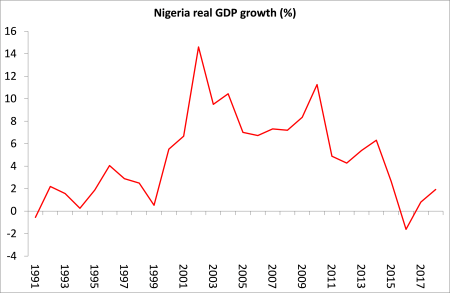 And the falling oil price and Nigeria’s slide down has meant a rising budget and external trade deficit.  That means the next government will be applying yet more austerity for the people while trying to restore profitability for the energy industries. 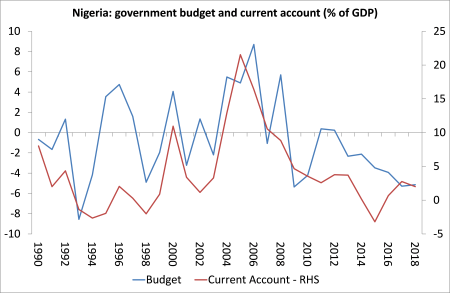 With the sharp drop in the oil price in 2016, the economy quickly slipped into recession and the slow recovery since 2017 has had little effect on providing jobs for young people and others. No wonder the biggest national group of immigrants trying to get into Europe from North Africa are Nigerian.

While Nigeria may have the largest GDP in Africa, with 200 million people, its income per person is shockingly low at just 19% of the world’s average.  “Inequality in terms of income and opportunities has been growing rapidly,and has adversely affected poverty reduction. The North-South divide has widened in recent years due to the Boko Haram insurgency and a lack of economic development in the northern part of the country. Large pockets of Nigeria’s population still live in poverty, without adequate access to basic services, and could benefit from more inclusive development policies. The lack of job opportunities is at the core of the high poverty levels, of regional inequality, and of social and political unrest in the country.” (IMF report).

Inequality is huge, with the gini coefficient of inequality of income over 40.  Nigeria has the highest proportion of people earning below the World Bank’s definition of poverty in the world!  Out of 180 countries, Transparency International places it the 144th least corrupt – in other words, it is near the top for corruption. Nigeria’s annual inflation rate is permanently in double digits, with interest rates for borrowing near 20%.

The choice for the people in this election is between the incumbent president, an ex-general who participated vigorously in previous military coups and dictatorships but is now a ‘converted democrat’; and an oil tycoon.  No wonder the voter turnout is likely to be only around 45% of 73m eligible to vote; the unemployed youth and poor do not vote (except with their feet).  So Nigeria’s nightmare is likely to continue.
Source: weknowwhatsup