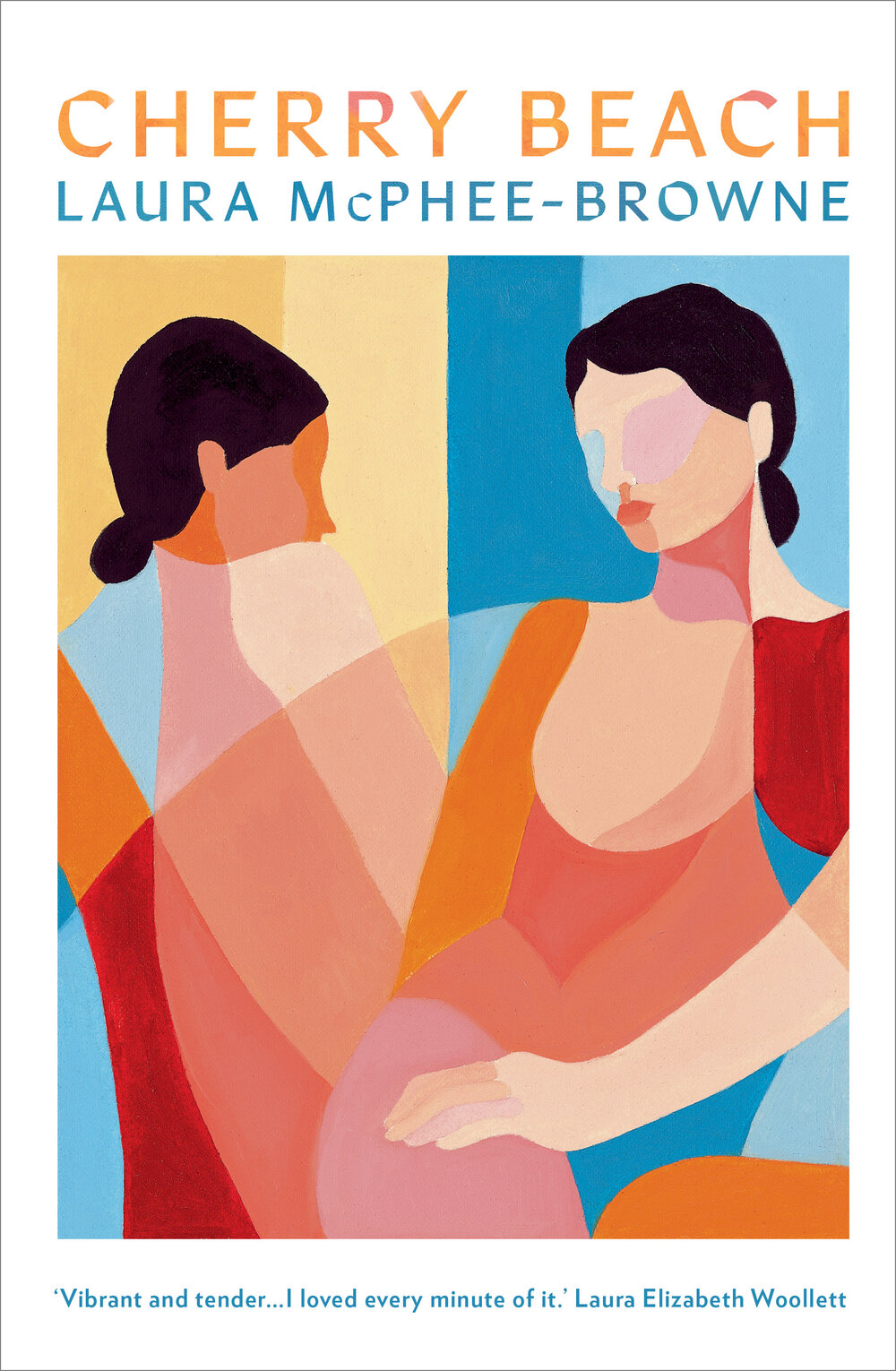 “This River I Stand In: A review of Laura McPhee-Browne’s ‘Cherry Beach’”, by Jack Callil

Late in Cherry Beach, there is a flashback. Ness and Hetty, the two friends central to the book, are swimming at a lake. Hetty wants to climb up to the top of the cliff and jump off into the water, but Ness is afraid. Hetty, unfazed by the danger, coaxes her into climbing up. Atop the cliff, Ness creeps to the precipice while Hetty stands calmly at the edge looking down into the depths below. “Come on Ness,” she says. “Come to the edge. It’s beautiful-scary looking out.”

In many ways, Laura McPhee-Browne’s debut novel is about the beautiful-scary. Cherry Beach exists in the gulf between adolescence and adulthood, that liminal space of profound redefinition and electric change. Ness, who narrates the book, has been inseparable from Hetty ever since they first met in primary school in Melbourne. She is in love with Hetty; that unlucky kind of love that sears on her memory how Hetty’s face scrunches up, how the arch of her back looks as she wades into water. In many ways they are opposites. “Hetty had beauty”, Ness says: strikingly tall, with long dark hair and a face clean and bright. Ness, on the other hand, ­is shy and anxious, hair “like a black scribble”. She invests her energy in others, in listening, in placating those around her at the sacrifice of herself.

Ness and Hetty want to become “better, more alive versions” of themselves, so they travel to Toronto in Canada to live indefinitely. When they arrive, they move into ‘Marjorie’, a warm sharehouse full of kind people who concentrate “earnestly on the best things about being young and alive”. For a while, the two learn how to exist in this new environment. They get jobs, walk around foreign streets, sit beside vast lakes with no perceivable edge on the horizon. Yet Hetty begins to grow oddly estranged: staying out late, hanging around with shady types, using drugs. Ness feels abandoned and is scared of how much their relationship is changing. Then one afternoon, while walking alone in a gallery, she meets a woman called Faith. They decide to go on a date, and as their relationship tentatively takes shape, so too does Ness’s sense of independence.

Water, as if a character, is always present in Cherry Beach. Whether in myriad forms as chapter headings or as the narrative undercurrent, it is the medium through which the story is expressed. The pace is undulating—McPhee-Browne’s sentences calmly yet confidently buoy ­­you until they suddenly yank you under. Hetty is “a water baby”, as Ness fondly calls her, someone who would rather “swim in the ocean or run out into the rain or do laps of the local swimming pool than anything else”. At first, this seems befitting of Hetty, illustrative of how she languidly drifts between people as if a rudderless boat caught in a current. Yet gradually it nods at something more elusive, perhaps sinister: an unknowable depth, a force of wild caprice impossible to hold between your fingers. The growing distance between Hetty and Ness, exacerbated by Hetty’s worsening mental health, is initially just “a brief change in the current”—though soon it feels to Ness as if “one of us was swimming and the other one nowhere near the water”.

The significance and shifting nature of friendship—but also of identity, sexuality, perception—are the foundation of Cherry Beach. Through the lens of Hetty and Ness, McPhee-Browne evokes the visceral impact of how relationships can become indelibly embedded in the mind and body, and how torturous it is to lose them. Ness relies on Hetty with an agitated intensity, a dependence that she both cherishes and fears. As Hetty becomes further lost to Ness, it provokes true grief, having a profound effect on her physically and psychically. In one passage, while Ness walks the Toronto gallery, she comes across a painting of Nan Goldin’s titled Picnic on the Esplanade, Boston: “a snapshot of a group of friends having a picnic on some grass next to dark-blue rippled water”. Ness expresses her desire to “be part of a group like that”. In many ways, Goldin’s photograph reflects the wistful longing we have for friendships: a desire to keep them preserved as they are, as if in a picture.

In her interactions with people and the world, Ness experiences things sensorially: her thoughts and emotions as cognisant as they are bodily realised. When Ness is happy, the world seems brighter, smells and colours more piquant; Faith makes her feel full of “nothing but fizz”. Similarly, when Ness struggles with change, grief, or her unrealised desires, her body responds: stomach churning, breath quickening, chest tightening in a way that she “didn’t fully understand but that was hard not to react to”. Via Ness, McPhee-Browne illustrates the tangled relationship between the mind and body, with Ness’s suppressed sexuality in particular articulating the ways in which we physicalise emotion. Her love for Hetty is like “a sickly feeling in your gut that you pretend isn’t food poisoning”, and when she thinks about how wonderful Faith is, it’s like she’s “about to vomit”.

Ness’s own queerness is for most of her life tempered and concealed: “the flow, the current” she keeps at bay. Even when Ness and Faith are having sex, Ness feels externalised, unworthy: “She was above and beyond and outside of me, even when I had had my fingers inside of her and had made her whine down to the bottom of her throat.” Yet Cherry Beach demonstrates how through other people we can both take apart and remake ourselves. Despite Ness’s disbelief, Faith loves and is deeply attracted to her, and throughout their time together embodies qualities that Ness admires and seeks to emulate. Faith doesn’t check her reflection in the large windows while shopping or scroll through her phone while out in the world—and during an argument, she insists that she would “rather be free than beautiful”. Gradually, the influence of Faith, and Ness’s own queer actualisation, shifts her; her interiority begins to bloom.

Hetty’s own process of transformation takes place largely beyond the borders of the narrative, though we become increasingly aware of its relation to her deteriorating mental health. McPhee-Browne handles the subject delicately, with multiple references to depression, psychosis, alcoholism, drug abuse, and addiction throughout. It is sensitive material to weave into a narrative, particularly as character fodder, but McPhee-Browne does so with understanding. (She works part-time as a social worker and counsellor, and has had frequent engagement with homelessness, addiction, and mental illness.) A moving example of this intuition is one passage that affectingly illustrates the innumerable gradations of depression, with Ness reflecting on her mother’s depression and that of Hetty’s Uncle Tom:

With my mother, the depression was a blanket that covered her entirely, that I lifted when I could find the edge, and that she told me was too warm or too cold, depending on the day. With Tom, I imagined it to be even more impenetrable, like a splintered piece of wood stuck fast in his chest across his heart.

Throughout Cherry Beach, Hetty’s worsening mental health increasingly places her within the proximity of danger. The threat of bodily and/or emotional violence is a recurring theme of McPhee-Browne’s short stories, such as ‘Stomach’ (Meanjin, Autumn 2018), a disquieting story about the rape of a minor; ‘Wet Towards the Waterfloor’ (Mascara Review), which centres on a woman having premonitions of her partner attacking her; or ‘The Bitter Dust’ (Kill Your Darlings), about a local man stalking a woman living in isolation on a farm. The threat of corporeal violence, especially against women’s bodies, ripples beneath Cherry Beach. Ness frequently refers to her need to protect Hetty physically, to “drag her body away” from harm. We initially believe Hetty to be brazen, forthright in all her decision-making, someone who would never find herself anywhere she didn’t want to be. But gradually it seems the opposite. In one particular flashback, Ness describes a day spent at Uncle Tom’s farm beside a lake. While Ness goes to the bathroom, Hetty is approached by a strange man, and Ness sees him “reach his hand down towards her thigh and squeeze it until the air was still”. This assault on Hetty later gives context to what she tells Ness at the lake, right before they jump into the water together: “I’m scared too, Ness. I’m always scared. Of everything.”

Cherry Beach has been called a queer Normal People, but this simplifies its multifaceted and nuanced layering of meaning. When walking over a bridge with Faith one day, Ness notes a plaque above saying, “This river I stand in is not the river I stand in.” It’s a line taken from the Greek philosopher Heraclitus, whom McPhee-Browne makes multiple references to, that regards the transient nature of the self, of our relationships, of everything. Throughout the unravelling story of Ness and Hetty, this sentiment is movingly played out. At times the story can get a bit cloying, too earnest—but it feels appropriate, somewhat like the character of Ness herself, who vainly struggles against wearing her heart so visibly on her sleeve. Through its exploration of queer actualisation, of the transformative nature of the friendship and love in our lives, of the inevitably beautiful-scary, Cherry Beach succeeds.

Jack Callil is a writer and editor based in Melbourne. He is currently Assistant Editor at Australian Book Review. You can follow him at @Jack_Callil.

“This River I Stand In: A review of Laura McPhee-Browne’s ‘Cherry Beach’”, by Jack Callil