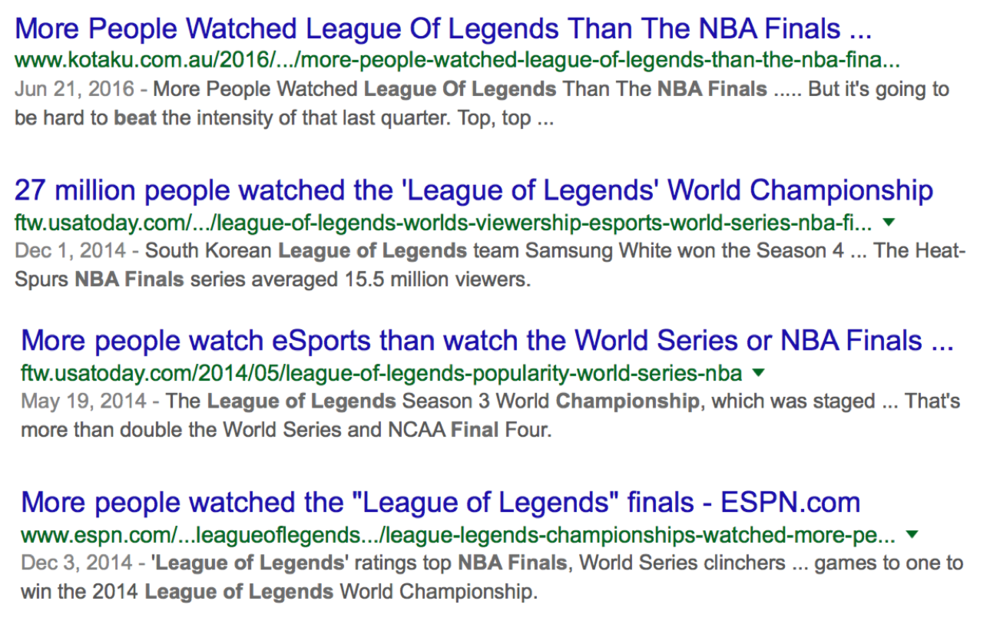 TNL Take: Writing about the business of esports for 3 years now, if there’s 1 topic that I’ve covered the most is esports TV and digital viewership.

I was the first to start reporting esports TV viewership as far back as August 2016 - which was just ELEAGUE back then.

However, the data being reported for esports digital viewership drove me insane. Here are some numbers that publishers would report:

None of it made any sense and here’s how many times I’ve addressed this:

May 10, 2016: MLG vs. MLB (Where even Activision CEO Bobby Kotick said “eSports viewership is greater than the individual audiences for NHL, MLB, or the NBA”)

November 27, 2017: How Many Viewers Watched The League Of Legends Championship? Not 60M.

I’ve even lost track of how many times I’ve tweeted about this as well.

Now that it’s 2019, things have changed right? Wrong. Here are just 3 headlines in the past few months:

April 14, 2019: CNBC: This esports giant draws in more viewers than the Super Bowl, and it’s expected to get even bigger

There were also these amazing charts: 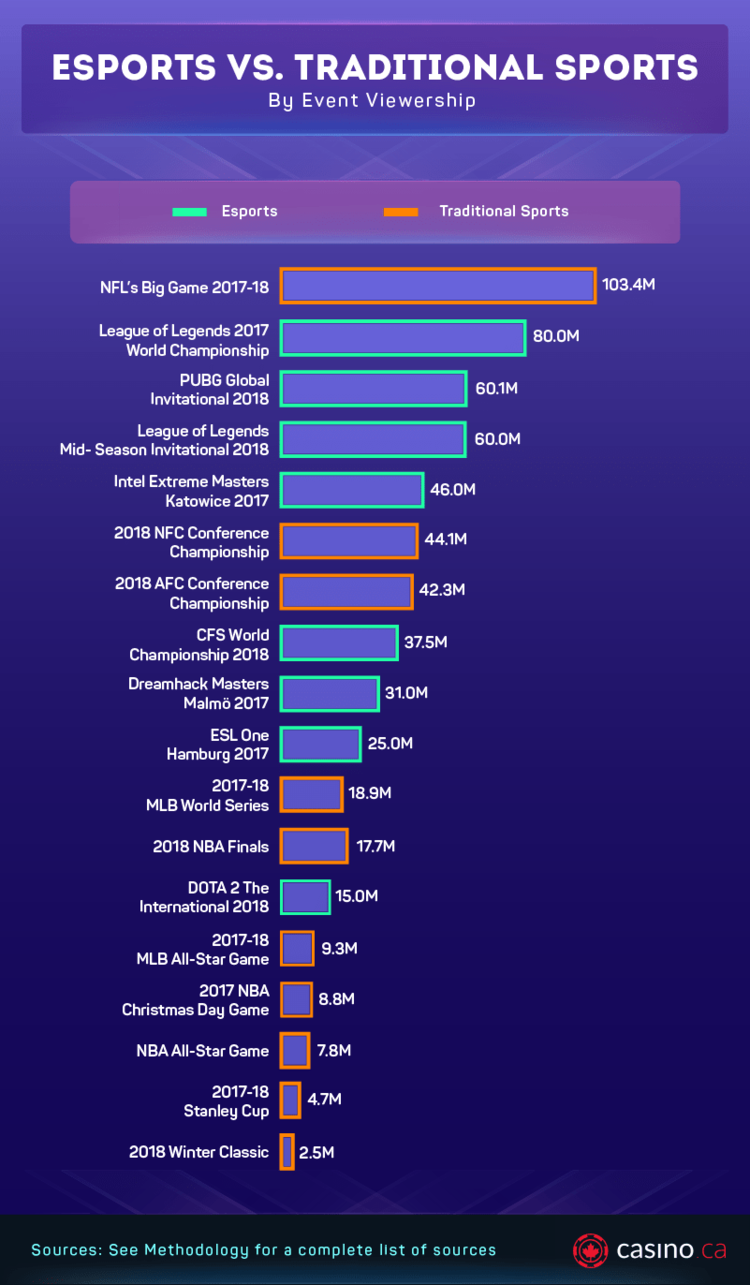 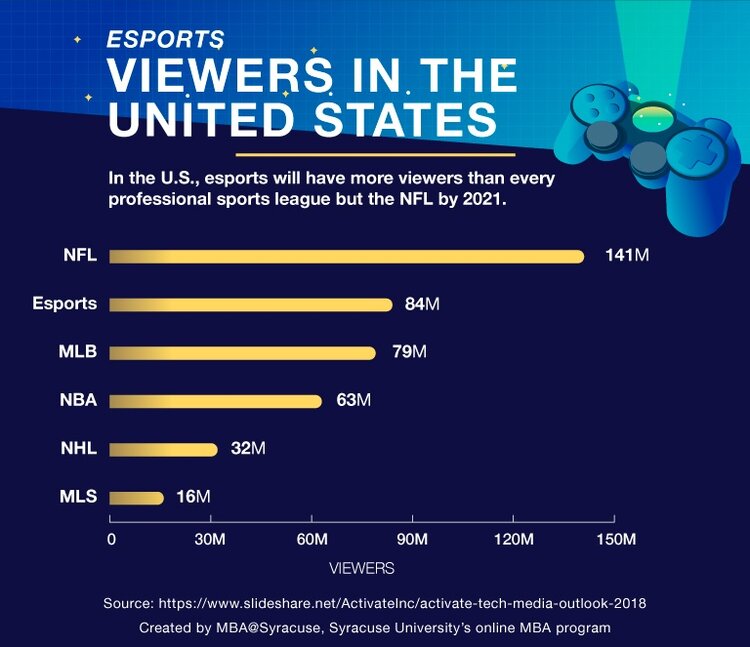 But now like manna from heaven, we are finally getting to the first universal esports viewership metric: AMA (Average Minute Audience) or ACV (Average Concurrent Viewers). Recently, Riot Games, Activision-Blizzard, Faceit and ESL have all released AMA/ACV data for the first time.

I spoke with the following industry leaders to get further insight:

(I also reached out to StreamMetrics and ESL for comment but did not hear back.)

TNL: I’ve said for 3 years that Average Concurrent Viewers or Average Minute Audience should be the first universal metric for esports. What’s your position on this standard?

Nielsen: AMA is a consistent and dependable metric for esports viewership. This is a standard we have presented to and encouraged the use of with our Esports Advisory Board members, and are actively working with multiple publishers (including Activision-Blizzard and Riot) and event operators (including ESL) to increase its use across the industry.  Based on the data currently available for esports viewership, AMA is the metric most closely comparable to television ratings, which is the standard advertisers and sponsors use for viewership measurement. Allowing easy comparability of esports to these other forms of entertainment content is critical in driving trust and transparency for the industry.

Stream Hatchet: We agree on using AVG CCV/AMA as the standard metric for streaming. Not only because it allows for an apples to apples comparison with TV, which helps bring more ad revenue, but also because it's the only accurate way to compare events that do not necessarily follow the same structure. While other metrics like Hours Watched can also be insightful to get a sense of the total impact of a channel, a game title, or an esports event, AMA is a metric that can be understood by everyone.

Riot Games: We strongly advocate that AMA should be the first universal viewership metric; it’s understandable and helps simplify comparisons with linear formats. Industry standards are critical to unlocking accurate media valuations as this ecosystem continues to grow. Without universal standards, it’s challenging to have conversations with partners, sponsors, and investors who are interested in supporting esports. By promoting the use of AMA, we hope to improve the industry and create a rising tide that will raise all ships.

Activision-Blizzard: We completely agree. AMA is the most fair representation of viewership for all live content and it is directly comparable with traditional sport numbers. It’s extremely helpful to everyone in the ecosystem (brands, agencies, investors, and press) to truly understand how esports performs against everything else.

TNL: How are you currently measuring AMA and at what intervals?

Stream Hatchet: Currently, we focus on Live Streamed AMA. All the major distributor platforms offer a way for measurement platforms to read at any given time what is the concurrent viewership of any channel that is broadcasting. We capture the concurrent viewership every minute for every channel that is streaming on any of the major platforms. To obtain the AMA of a specific channel or event we only need to average all the reads that we did for that channel across the corresponding period.

TNL: What are the plans for Asia, particularly China?

Nielsen: We are definitely increasing our work and focus in Asia, of course China being part of this. One of the benefits of working with Nielsen is our ability to combine the local market expertise that comes with our global scale in our Sports and Brands businesses with the esports-specific knowledge of our Esports team.

Stream Hatchet: While most international platforms outside of China will likely adopt similar measurement practices through concurrent sessions in order to land the same investment that western platforms are seeing, Chinese platforms are a different beast. Comparing a metric like Views from Twitch to YouTube Gaming is hard enough. One platform counts a view after 10 seconds, the other one counts a new channel view after 6 minutes. Comparing something like Hours Watched to a "Popularity Score" seems almost pointless when it's nearly impossible to understand how the score is calculated.

TNL: What have been the early results of publishing AMA data and brand reaction?

Activision-Blizzard: What has really stood out to us is how competitive we are with traditional sports when you look at the 18-34 demo. While traditional sports boast high overall numbers, when you actually narrow their audience down to the most valuable segment (18-34), you lose the majority of the audience.  The brand conversations couldn’t be going better. Everyone is very appreciative that they can finally get some numbers they can compare to their other investments.

Riot Games: Brands that we’re working with have been great supporters of our push for better industry standards, more transparency into performance, and our ability to help guide their strategy on how to engage with esports fans today.  AMA is a metric that they are familiar with and can better translate to their internal KPIs and initiatives. Our brand conversations have been very positive.  A number of our partners have existing relationships or have worked with Nielsen in the past, which makes the results easy to integrate with their overall measurement systems and evaluate within their portfolio of sponsorships. Commitment to transparency has been a longstanding pillar of our sport.

TNL: Has there been a specific metric or theme that stood out from this data?

Activision-Blizzard: We’re seeing that OWL’s regular season USA AMA of 55K is already beating some leagues in the USA like MLS and MLB. When you take into consideration that every league is declining in the 18-34 demo (while OWL is up 11 percent YoY), it won’t be long before OWL becomes one of the largest leagues in the US.

Riot Games: With Nielsen specifically, the key metrics they are measuring have been tied to media valuation and the performance of specific activations. Beyond that, our measurement and data has been tailored to support the initiatives of our partners. Each has a different goal and perspective on success and our aim is to help them evaluate that performance, as well as exceed it, by giving them the right tools and information.

TNL: What do you see as the main hurdle to have AMA accepted across the major publishers, tournament operators, media companies and platforms alike?

Activision-Blizzard: People have to accept that these numbers are going to be lower than what has been previously reported (peaks, views, uniques) but they are much more accurate and representative of viewership. Esports doesn’t need to be bigger than the Super Bowl today and it doesn’t help anyone in the long term if we continue to push an inaccurate narrative.

Riot Games: Education. We need to share standards for what numbers mean, how they’re calculated, and how to interpret them. The faster we can do this, the faster everyone can get on the same page and facilitate better conversations, which will continue to grow the industry. The fans continue to grow, the events only become more spectacular and being able to express that in a meaningful way to non-endemics is the next step to take.

Thanks to everyone for participating and providing further insight into this metric. The one area that I would add as a hurdle - which can be easily addressed - is for research companies, publishers, tournament operators and brands to agree on one measurement for AMA/ACV/Whatever name.

From the garbage data we were seeing a few years back (and still seeing), has finally been addressed by the biggest players in the esports space and that is amazing progress.