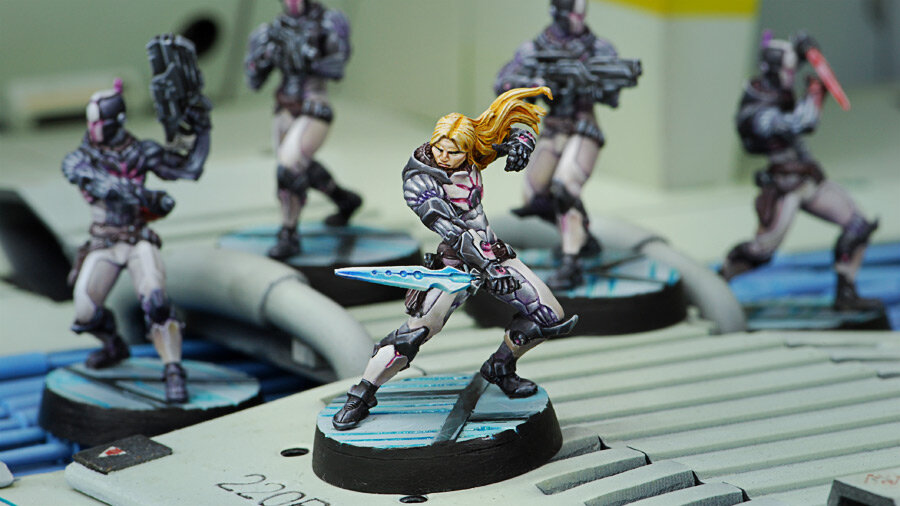 It’s about time we talked about the biggest and baddest Steel Phalanx commenders out there, Achilles and his rival, Hector. Both of these characters are the pinnacle of the Steel Phalanx’s martial ability. Hector is an incredible commander, who is still scrappy in a fight, while Achilles is an absolute combat monster, effective at range, and devastating in combat.

Well, let’s get the ball rolling on one of the most impressive profiles in the game. Achilles is incredibly fast with a whopping 6-4 movement, but also dodges and engages an extra 2” thanks to Kinematika L2. Truly a Close Combat nightmare with CC24, Martial Arts L4, and hitting you with an amazing PH15 and an EXP CCW. As if that wasn’t bad enough, BS15 armed with either a Spitfire or MULTI rifle, a nanopulser, and a DEP on one profile for good measure. Survivability is of the upmost importance when running such a powerful unit, so to keep him alive Achilles has either an ODD and ARM 4, or Mimetism and ARM 6 (I prefer the ODD option), and nothing short of 3 full wounds. Achilles is truly a terror on the table, and rightfully one of the most feared units in the game.

When I build an army with Achilles, much like building a list with the Avatar in Combined, I design the rest of my list around supporting him. A Doctor and Engineer are both a must, to protect him from being shot off the table, Isolated, hit with E/M, etc., and if your Lieutenant, absolutely get Chain of Command. From there though, you actually have a fair number of points left to spend on specialists to accomplish the mission. You can expect that many opponents will invest a fair amount of effort in removing Achilles if they can figure out how. By using Achilles in the early game to exert pressure on the opponent, you also force them to commit to taking him out or not right away. You can use this to your advantage, but make sure you don’t fall into your own trap. Learning to spend the right amount of orders on Achilles, while leaving you enough resources to accomplish the mission is a delicate thing to figure out. He will likely start generating Impetuous orders on Turn 2, and will possibly have the DataTracker special order, and even Lieutenant order on his own, but don’t over-invest and lose sight of the goal.

Between the MULTI Rifle and Spitfire, I always go Spitfire, but an argument can still be made for the MULTI RIfle. Steel Phalanx has SWC problems as it is, and even over 16” he can hit a model in cover on 9’s, which is nothing to be ashamed of. Close Combat is obviously a tempting proposition to get Achilles into, he’s among the best in the game in melee, but he’s also among the best in the game at range! Close Combat gets very risky where he is only throwing 1-2 dice, compared to 4 with the spitfire. Keep an eye out for E/M melee troops, E/Maulers, and anything else with E/M ammo, Hackers or Jammers, you want to keep Achilles in the fight as long as possible, and all those tools can take your fun away.

Achilles v2. As if his original profile wasn’t enough, when they updated the mini, they also came out with an impressive ARM6 variation. Achilles v2 has a few added tricks, though downgrades ODD to Mimetism, loses a level of Kinematika, and loses Multi-terrain. In exchange, Achilles v2 has ARM which is generally reserved for TAGs, on his petite S2 frame, Forward Deployment, and the ability to link with Patroclus in a fancy Duo, with a pair of holo-clones. There are some advantages to running the Duo, though it is exorbitantly expensive. While Patroclus doesn’t have Achilles’s high BS, the ability to surprise shot can make up for it. Additionally, you can use holo-clones to clear mines, trigger AROs, and other shenanigans, without putting either character into danger. Between the two profiles though, I love having ODD to win the fire fights, and unless I’m going to link with Patroclus, I’d rather stick to the original. 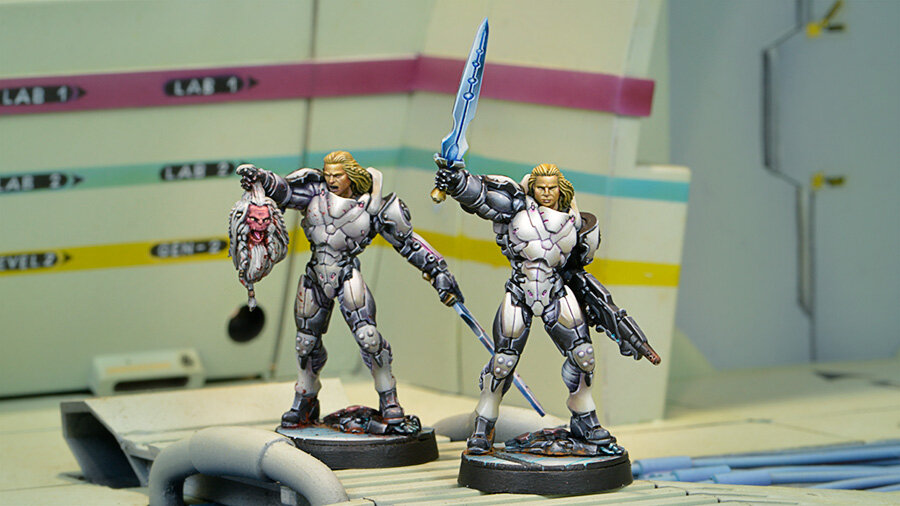 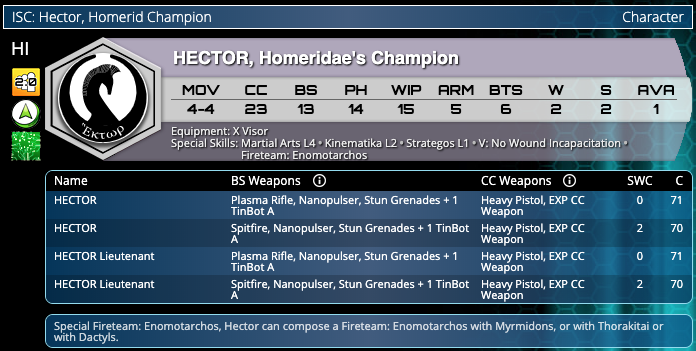 While Achilles is clearly a god of death, Hector is a bit more of a support character, but also still incredibly lethal. Hector boasts a solid CC23 and Martial Arts L4, with PH14 and an EXP CCW, making him still one of the better close combat troops in the game. At range Hector has a respectable BS13 and X-visor, as well as the choice between Spitfire, and something altogether different, a Plasma Rifle. Protected by some heavy armor, Hector has ARM5, BTS6, TinBotA, W2 and NWI, making him a real pain to remove. As if that wasn’t all enough WIP15 and Strategos L1 make Hector a really fantastic lieutenant.

Between the Spitfire and Plasma Rifle, the uniqueness makes the later choice extremely appealing. Hector isn’t as good of a gun fighter as Achilles, but he’s no slouch either, and unlike Achilles, can be linked. Firing 4 Plasma Rifle shots at BS13, with an X-Visor, is really, really fun too, cutting down swathes of troops and a real ordeal for enemy link teams. Since he is far less suicidal than Achilles, I think you need a less specialized list, letting Hector probably get a bit more game time than his cousin. As Lieutenant, it’ll be obvious who your Lieutenant is, but providing an extra order that can be used while linked is very helpful for Steel.

Hector can form an Enomotarchos with Myrmidons, Thorakitai, or Dactyls, so you have plenty of options. In a Thorakitai link he can offer some more mid-ranged fire support, but probably wont replace the HMG for extended distances (but isn’t bad either), be sure to take an Engineer to fix him. Dactyls are an interesting link option, able to bring both Doctors and Engineers, but aside from disposable weapons, lack anything longer-range to support him with. Myrmidons offer the most flexible choices, thanks to the assortment of characters which can be added, including Machaon to give some doctor support, Phoenix for long-range, an AHD which can benefit from the TinBotA, etc. Just be careful to not end up with a massive Deathstar, sinking all your points in one place that could meet a fiery end from a Katyusha. 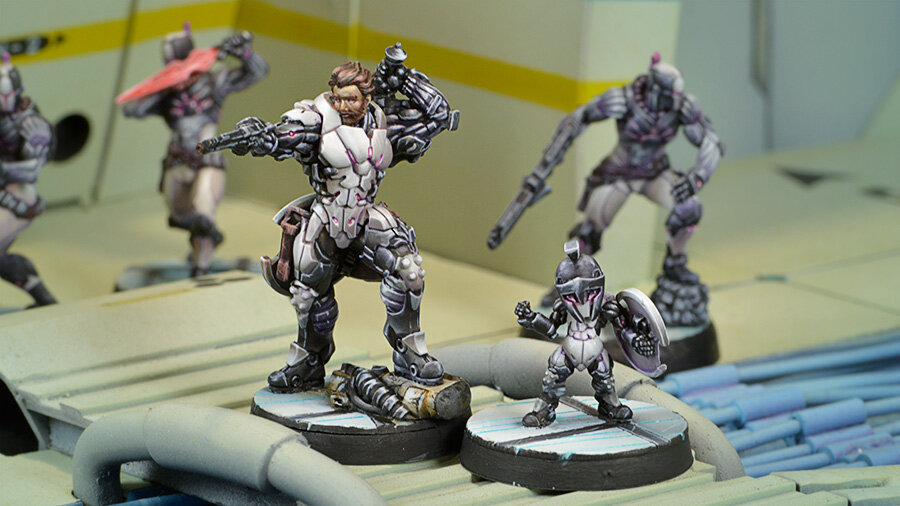