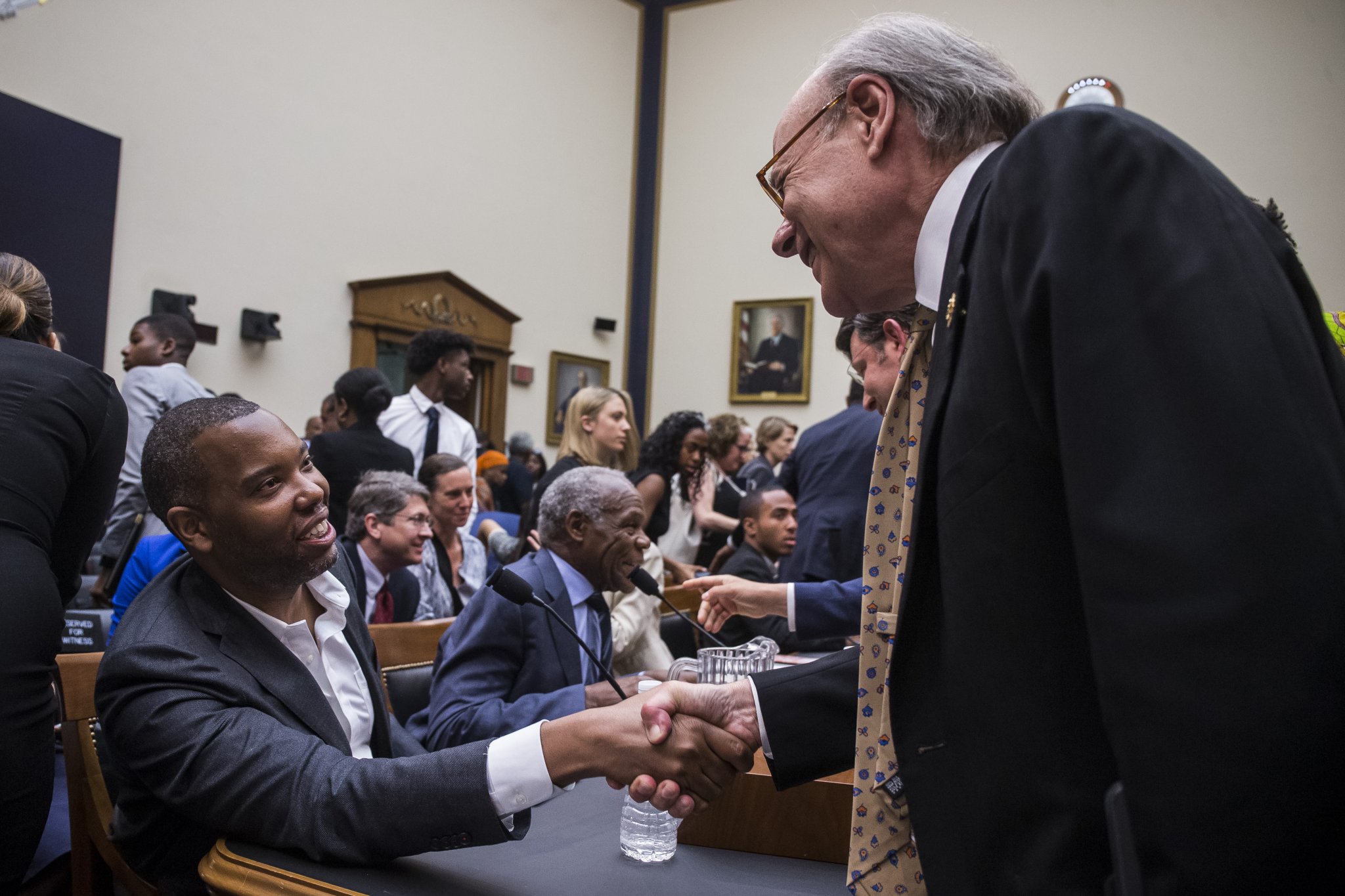 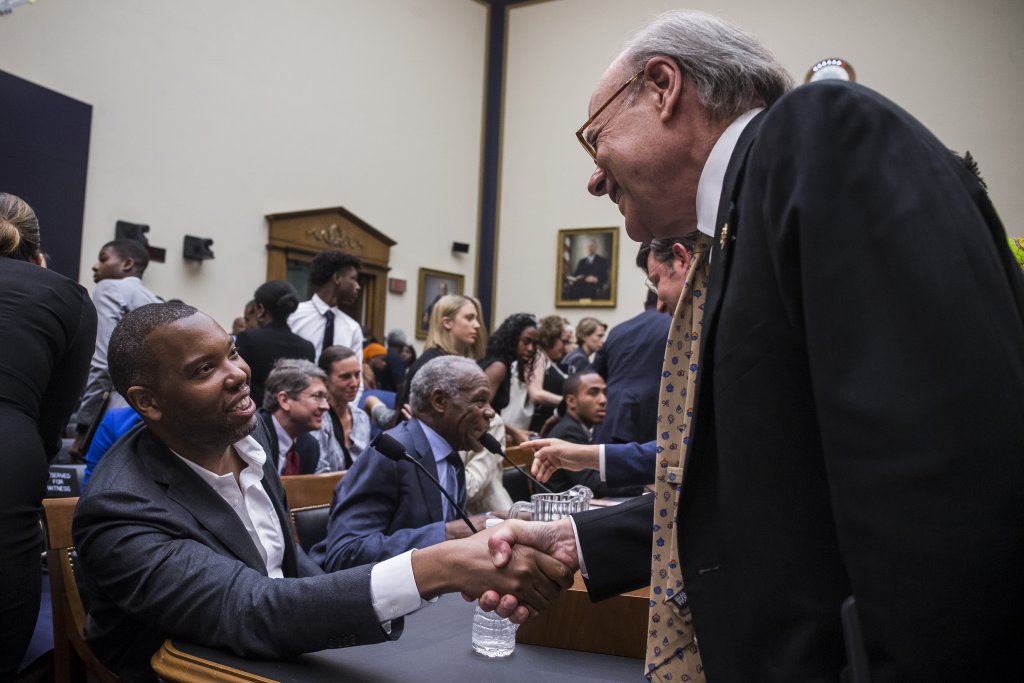 WASHINGTON — The White House on Wednesday indicated that President Joe Biden would support studying reparations for slavery, the same day that House Democrats held a hearing on legislation that would set up a reparations commission.

But White House Press Secretary Jen Psaki stopped short of saying Biden would sign the bill under consideration by the House Judiciary Committee.

“Slavery was our nation’s original sin,” said Cohen, the chairman of the Subcommittee on the Constitution, Civil Rights and Civil Liberties. “This is a crime against humanity, and the effects it has had on our society, on African Americans in general, continue to cause difficulties for people in America, everything from racial inequality to economic opportunities.”

The bill’s commission would study how the U.S. government can craft reparations to address disparities in wealth, education, health, housing and mass incarceration, among others. No Republicans have signed on to H.R. 40, but more than 160 Democrats have.

Similar attempts in the past haven’t gone far, but supporters could make more progress after the past year’s widespread protests over racial injustice following the death in May of George Floyd in Minneapolis. A former police officer faces charges of second degree murder and manslaughter for kneeling on Floyd’s neck for over nine minutes, killing him, and the trial is set to begin next month.

Psaki said during a briefing that the president would support a study of reparations, but she would not commit to his signature on H.R. 40. She said Biden awaits the end of the legislative process.

“He supported a study of reparations, which I believe is what’s being discussed and studying the continuing impacts of slavery, which is being discused in this hearing on H.R. 40,” she said. She also pointed out he has signed an executive order that commits to “addressing racial inequality and making sure equity is part of his entire policy agenda.”

Asked if Biden would support an executive order on reparations, Psaki said that “it would be up to him.”

At the hearing, Rep. Sheila Jackson Lee, a Texas Democrat leading support for the bill, stressed that the legislation only establishes a commission to study and make proposals.

She said that the hearing was not about giving money to Black Americans, which was the main argument Republicans made against the bill.

“Hidden in the corners of this nation are those of African American heritage, the descendants of enslaved Africans who have felt the sting of disparities and continue to feel that sting,” she said. “Now more than ever, the facts and circumstances facing our nation demonstrate the importance of H.R. 40 and the necessity of placing our nation on the path to reparative justice.”

One of the witnesses, Kathy Masaoka, co-chair of Nikkei for Civil Rights & Redress, said that she knew the federal government could play a role in reparations because it had done so for the more than 120,000 Japanese people who were forced into internment camps during World War II shorty after the bombing of Pearl Harbor by Japan. The organization educates people about the wartime injustices that Japanese people went through.

More than 60 percent of those imprisoned were citizens.

“For the Japanese American community, the 1981 Commission on Wartime Relocation and Internment of Civilians (CWRIC) authorized by President Jimmy Carter, provided an opportunity for many former incarcerees to speak out about the feelings and experiences they had held inside for 40 years,” she said in her opening remarks.

Masaoka said the commission helped educate other Americans about the atrocities her community faced, and the same needs to be done for African Americans.

“So, too, many in this country, including ourselves, do not know the long history and legacy of slavery,” she said.

Another witness, former University of Georgia football player, and Heisman Trophy winner, Herschel Walker, said he did not understand the need for reparations. Walker said that it would be difficult for the commission to study it as he had difficulty finding information on the topic himself.

Jackson Lee told him that was part of the commission’s mission, to study and provide research and craft reparation proposals based on those findings as well as educate people.

Walker, who campaigned last year for former President Donald Trump, also said he didn’t want to make white people feel guilty for slavery, and that that it wouldn’t be fair to make taxpayers pay for reparations because they were not involved in slavery.

He said that “it will only create division with the different races.”

Another Republican, the ranking member of the subcommittee, Burgess Owens of Utah,  said the idea of reparations was “impractical and a non-starter.”

Owens, who is Black, spoke of how his family grew up during the Jim Crow era, when laws were crafted to make segregation legal, and his father, mother and uncle were able to overcome that racism.

He argued that Black people need to understand their past history because they were able to create and build their own middle class community in the 1960s.

“If we’re sincere about repaying Black Americans for our loss, give us back our history,” he said. “In doing so you’ll ensure pride within our race as we accept our lineage as victors, and the same history will command the respect from fellow Americans as an example of how to overcome the most overwhelming odds.”

An example of reparations on the state level is in Oklahoma. One of the most wealthy Black communities in the early 1900s was in Tulsa. Known as Black Wall Street, it was burned to the ground in 1921 by a white mob that left 10,000 Black people homeless, millions in property damage and more than 100 dead.

The state legislature opened in 2001 its own commission into the riot, which found that the city conspired with the mob to attack its own Black citizens. The commission recommended reparations to the survivors and descendants of the massacre, which the state later passed.

Rep. Deborah Ross,  D-N.C., also said that a commission on reparations could work because her state formed one. She pointed to the massive eugenics campaign that North Carolina carried out between 1929 to 1976, in which more than 7,000 people were forcibly sterilized. It was a campaign that targeted Black people and people with disabilities.

The state passed a law in 2010 to create an agency to distribute financial reparations to compensate those who were sterilized by the State of North Carolina’s Eugenics Board program.

“As we think about the history of racism and slavery in this country, we have to have a conversation about the truth of the past and the harms that have been inflicted,” she said, adding that the commission is the first step toward that.

In Pennsylvania, state Rep. Chris Rabb, D-Philadelphia, also has pushed reparations legislation, telling the Capital-Star in 2019 that the nation — and the state — was long overdue for a discussion on redressing what he described as the “intergenerational damage” inflicted by slavery.

Rabb’s proposal died in the 2019-2020 legislative session without seeing a vote. Rabb told the Capital-Star in a text message that he plans to reintroduce the bill in the current legislative session, but did not have a firm timeline on when that would happen.

Kamm Howard, who helps lead an organization that supports reparations, said that there are five areas of injuries that the commission should consider: criminal justice and policing; health disparities; white supremacy; disparities in education; and disparities in wealth.

“We have to address the foundational root cause of the atrocities that have been committed in our country against Black people,” he said.

Howard is the national co-chair for the National Coalition of Blacks for Reparations in America, which is an organization that seeks reparations for the descendants of African American slaves.

A 2020 study by Citi Bank found that if reparations were initiated 20 years ago to bridge four key racial gaps—those in wages, education, housing and investment— then $16 trillion could have been added to the economy.

“And if the gaps are closed today, $5 trillion can be added to U.S. GDP over the next five years,” according to the study.

When the Emancipation Proclamation was signed in 1863, Black Americans owned about one half of 1 percent of the total wealth in the country. More than 150 years later, that percentage has barely budged as the Black community only owns 1% of wealth in the U.S., according to research by Dalton Conley, a sociology professor at Princeton.

“H.R. 40 is intended to begin a national conversation about how to confront the brutal mistreatment of African Americans during chattel slavery, Jim Crow segregation, and the enduring structural racism that remains endemic to our society today,” the Democratic chairman of House Judiciary, Rep. Jerrold Nadler of New York, said in his opening remarks.

“I hope that the commission established by H.R. 40 can help us better comprehend our own history and bring us closer to racial understanding and advancement.”