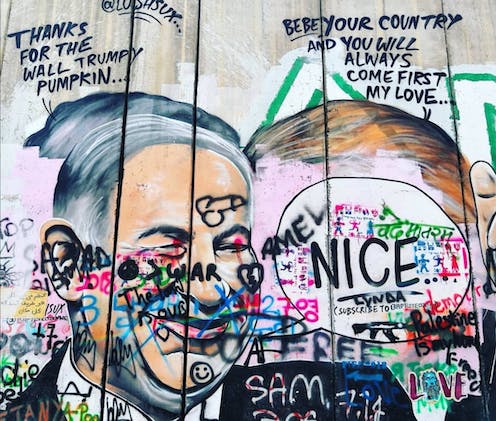 With typical Trumpian bombast, the so-called “deal of the century” for Israel-Palestine “peace” was unveiled in Washington on January 28, just as dusk descended on the West Bank city of Bethlehem.

While international political leaders may have been waiting with bated breath, there was less enthusiasm among the students I met at a cafe in the West Bank’s Aida refugee camp. They’ve seen and heard it all before; they know the script.

Situated yards from the spot where Abed al-Rahman Obeidallah was shot dead by an Israeli sniper in 2015 while wearing his school uniform, the Aida cafe, provides a much-needed workspace for locals and non-locals alike. I’m one of those non-locals, currently based in the West Bank carrying out research on resilience and development in Palestine, and it’s a place I often visit.

The period furniture and artwork in the cafe sits in stark contrast to the nearby modern and imposing Israeli separation wall, declared illegal under international law. Not that rules seem to apply here. Aida camp has been in the news many times, making headlines in 2017 when it earned the reputation of being the most tear gassed place on earth.

Since entering the Oval Office in 2016, Trump has overseen a number of controversial steps concerning Palestine and Israel. He officially moved the US embassy from Tel Aviv to Jerusalem in 2018 and recognised Israel’s annexation of the Golan Heights a year later. His administration also ended USAID contributions to the Palestinians and then rolled back on language that deems Israeli settlements in the West Bank illegal in late 2019.

Read more: Trump's Middle East 'vision' is a disaster that will only make things worse

Trump’s new “vision for peace” in the Middle East proposes setting aside sections of land for a Palestinian state, but current illegal settlements in the occupied Palestinian territories would be annexed to the state of Israel.

The Palestinian leadership condemned the plan, which was met by widespread protests in towns and cities across the West Bank, including Jerusalem, and in the much-maligned Gaza Strip. Palestinians have become used to rejecting any notion of a peace deal that will have their best intentions at heart as “fake news”.

“Peace” has never been based on “justice” for Palestinians, as I’ve argued before. It has only ever helped serve the vested interest of a range of external players in the Middle East and has focused on removing Palestinian claims to sovereignty while facilitating Israel’s expansionist settlement programme.

A cursory glance at previous US-sponsored peace efforts highlights the extent to which Palestinians have been consistently coerced into rolling back on their demands – or rights – all the while development aid has flooded the region in an effort to generate acquiescence.

Trump’s proposals should not be shocking – they are a continuation of US foreign policy in the region for many years. As PhD student, Mohammad, reminded me in Aida cafe:

This didn’t just happen overnight, peace here has always just been another word for colonisation.

Leading Palestinian scholar Noura Erakat referred to the announcement, which Trump made flanked by Israel’s Prime Minister Benjamin Netanyahu, as the normalising of colonial violence.

With Israelis heading to the polls in March for the third time in a year, the timing of Trump’s announcement appears deliberately choreographed to many. It came during Trump’s impeachment trial in the US Senate, and on the same day that Netanyahu was indicted on corruption charges after withdrawing a request for parliamentary immunity.

The significance of the timing was not lost on Mohammad’s friend, Sameh who joined us.

Isn’t this not just a way of distracting the world from all the corruption charges that these two white guys face?

Wrapped within the detail of the text is the promise to generate US$50 billion of economic aid, supposed to: “Fundamentally transform the West Bank and Gaza and to open a new chapter in Palestinian history.”

But as others have noted, and as history has shown, the promotion of an “economic peace” will always be doomed to fail. Mohammad reminded us:

This deal of the century and pouring money into the West Bank, throwing more money at the situation, this is what has been the basis of the flawed approach to change here for years.

What will, however, fundamentally transform the West Bank is the decision to give a green light to the annexation of illegal Israeli settlements, particularly those in the Jordan Valley. It is a move that will ensure the area is further carved up and one that highlights that a two-state solution is nigh on impossible.

Despite this, international governments will continue to promote the myth of a two-state solution with blunt intransigence in an effort to see a return on years of investment they have pumped into the region. And international NGOs will continue to develop schemes to help generate Palestinian resilience rather than agitate for meaningful change.

Implementation of the so-called “deal of the century” will further demonstrate Israel’s flagrant breach of many international laws, including the fourth Geneva Convention that forbids the annexation of occupied land.

In December 2019, the International Criminal Court opened an investigation into alleged war crimes committed in the Palestinian Territories. Perhaps there is a glimmer of hope that the international community will begin the process of generating some form of justice for Palestine.

Brendan Ciarán Browne has received funding for his work in Palestine from the ISSF Wellcome Trust administered through TCIN, Trinity College Dublin.