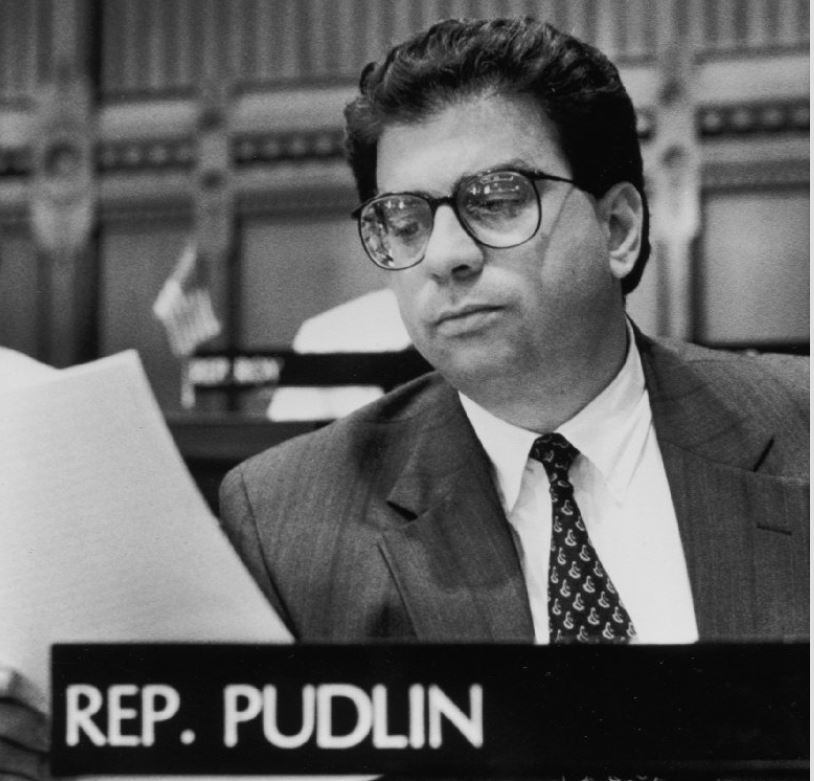 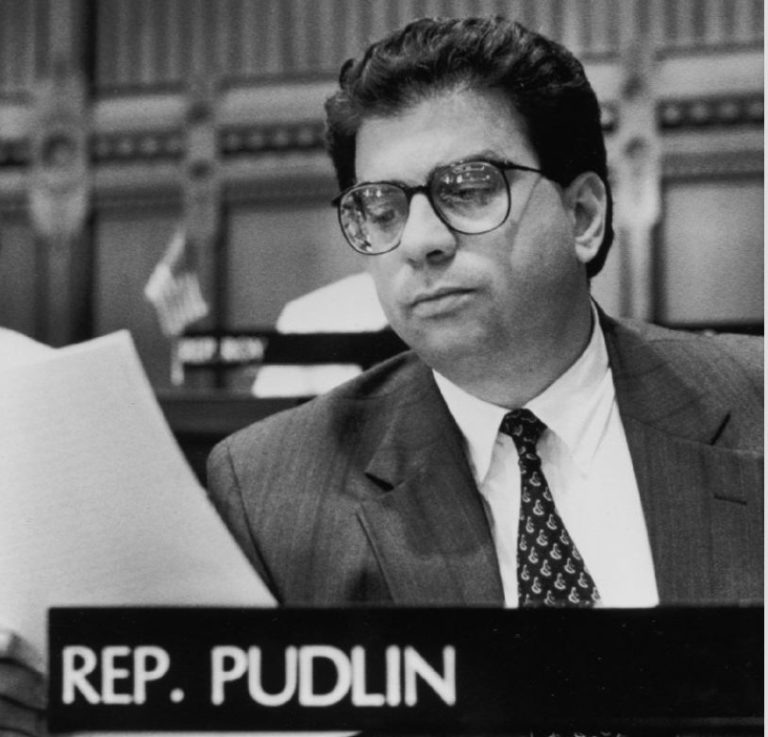 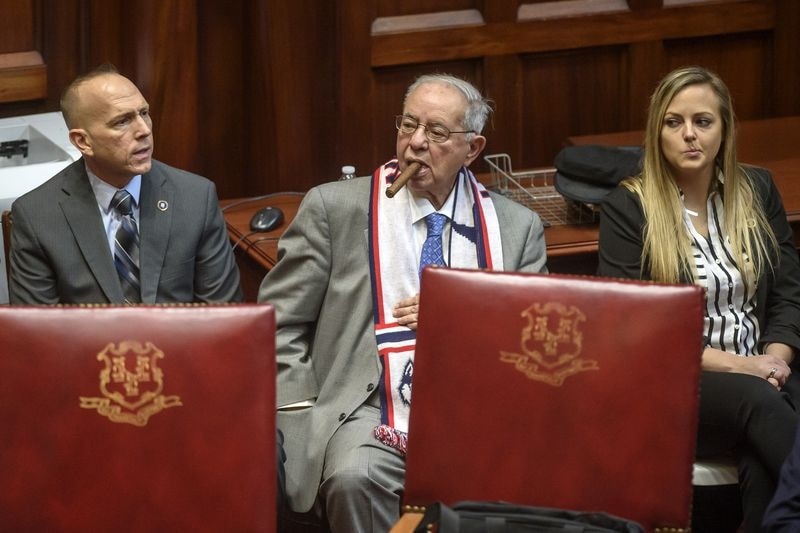 Retired State Senator Billy Ciotto cradles an unlit cigar in his mouth on the floor of the Senate chamber in 2019 prior to the swearing-in of Lieutenant Governor Susan Bysiewicz. Ciotto served for 12 years in the Senate and 42 years at the state motor vehicles department, where the headquarters building in Wethersfield is named in his honor.

Dave Pudlin seemed to know everything. Whether the topic was labor history or where the best hot dogs or the last votes could be found, he was someone to consult. He was a left-wing Jewish intellectual who mastered coalition building in the Catholic wards of New Britain.

Billy Ciotto seemed to know everyone. And everyone seemed to love him, from the guy who succeeded him in the state Senate to the congressman who happily kept him on the payroll past his 91st birthday, last Christmas Day.

Their careers overlapped. Ciotto was a state senator for a dozen years, elected in 1994 as a 65-year-old retiree from the Department of Motor Vehicles. Pudlin was elected to the House in 1988, a union organizer with District 1199. He became majority leader 10 years later.

On Saturday morning, text messages and calls bounced around the small world that can be Connecticut politics, sharing news of their passing. Did you hear about Billy? No, did you know about Dave?

Then came the stories. They were of different generations, both Democrats who took joy in partisan politics and its practitioners, even if they were of the other party.

“I would hope the way they conducted themselves is not gone,” said Lawrence Cafero Jr., the former House Republican leader. “Because that’s the way it should be.”

Ciotto’s approach to public service never really changed, from his time at the DMV to the state Senate and, more recently, as a community liaison for Congressman John B. Larson, D-1st District. He returned phone calls, remembered names, and did things for people.

It might be help with a license renewal or a Social Security check. Yes, there were favors for the connected. If you see someone with a three-digit license plate, you may be seeing the work of Ciotto, who ended up with his name on the DMV headquarters.

Sometimes there were bigger things. Oh, you need a bridge? A road named? As a state senator, Ciotto was a master of packing things into one giant hard-to-decipher bill — an aircraft carrier in legislative parlance.

“Don’t worry. What you want is in there,” Ciotto would say, as recalled Saturday by Senate President Pro Tem Martin M. Looney, D-New Haven. “You may not be able to find it, but it’s there.”

During campaign seasons, his car carried a bumper sticker promoting the election of Paul Doyle of Wethersfield to the House, a small gesture noticed and remembered by more House members than Doyle.

We loved him in the House. That was not always the case with senators. ”—  Thomas D. Ritter, former House speaker

“We loved him in the House,” said Thomas D. Ritter, the former House speaker. He laughed and added, “That was not always the case with senators.”

When Ciotto retired from the Senate, he was succeed by Doyle, the lawyer he had promoted for election to the House. Doyle said he learned much from campaigning with him.

“He was a classic in the sense he could connect to anybody on the campaign trail,” Doyle said. “I campaigned with him for years. A person would walk by, and Billy would know the person’s name, his siblings, his children.”

U.S. Sen. Chris Murphy, who grew up in Wethersfield, was 17 when he cold-called Ciotto, asking how he could get involved. Ciotto put him in charge of lawn signs and became a friend and a mentor. Murphy said he owes his career to Ciotto.

“But I am not alone. Billy overflowed with compassion, and his exuberant, triumphant joie de vivre lit up every room he entered,” Murphy said. “Hundreds of people chose to become involved in civic life because of the example Billy set.”

Ciotto was a cigar smoker, a habit eventually cramped by law and health. But he rarely walked into the Legislative Office Building or the Senate Democratic caucus room without an unlit stogie, a prop and sometimes a tool.

He could simultaneously compliment and humble.

To a certain reporter, he’d say, “You’re doing a good job.” Then he’d point his cigar, narrow his eyes and add, “So far.”

“He could you put you in your place, always tongue in cheek,” Larson said.

After he left the Senate, Larson hired him as a part-time staffer. Doyle said the job extended Ciotto’s life. Looney said it was the best part-time hire in politics, given that Ciotto’s popularity throughout the district made him the perfect surrogate. IF Ciotto was there, no one minded if Larson was not.

Ciotto once made a similar observation to Larson.

Larson laughed telling the story. Larson was happy to introduce Ciotto, a proud Italian-American, to Speaker Nancy Pelosi, the first woman and first Italian-American to lead the U.S. House of Representatives. Pelosi called the Ciottos with her condolences Saturday. 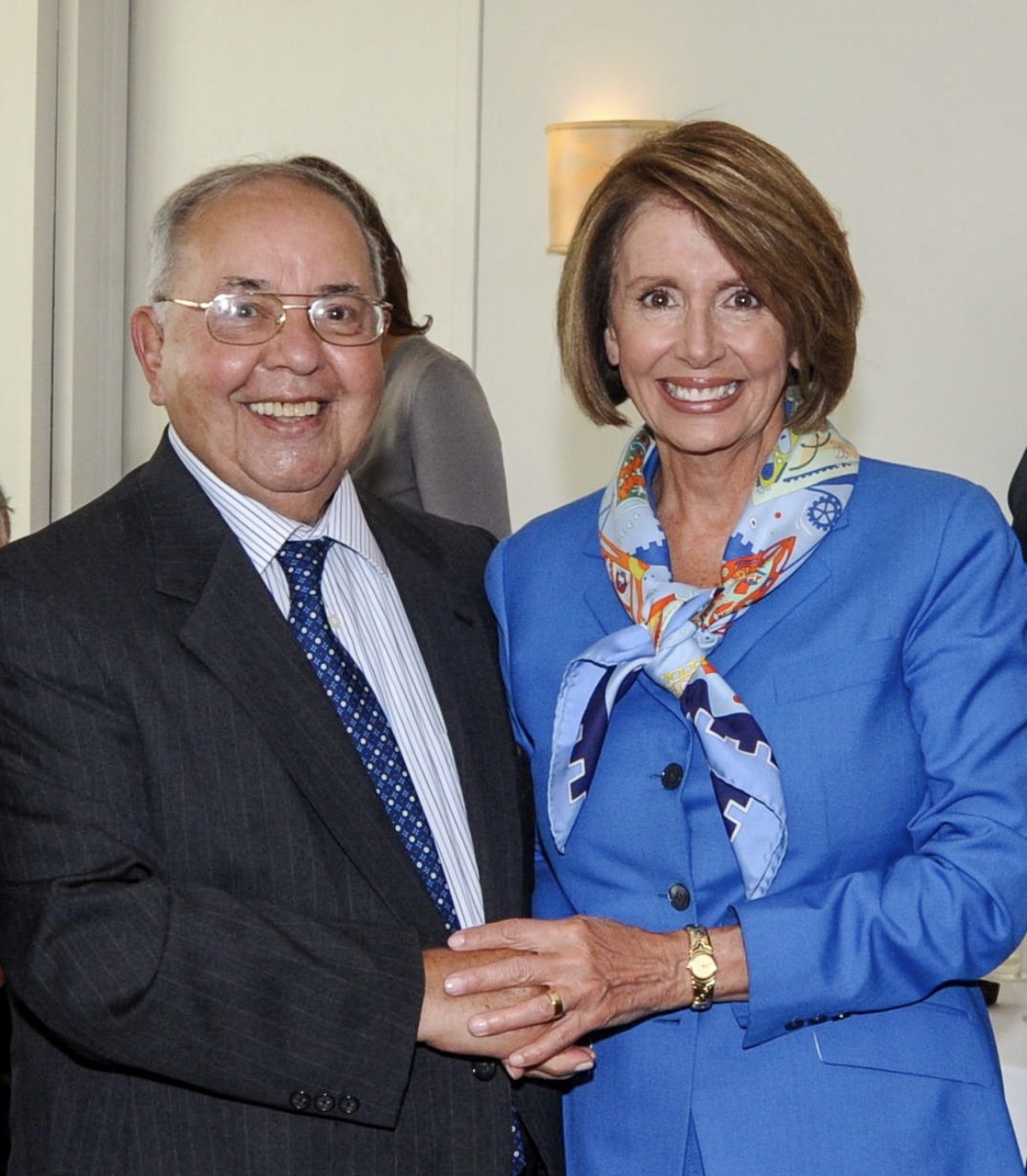 Ciotto was a fan of Nancy Pelosi, the first Italian=-American speaker of the U.S. House. She called Saturday with condolences.

During the pandemic and as his own health deteriorated, Ciotto tried to quit the congressional job. Larson declined to accept, assuring Ciotto that everyone was working from home, not just him. Larson said when he recently visited, Ciotto thanked him.

“That meant a lot to me,” Ciotto said.

His wife, Jeannie, made sure the moment did not turn maudlin. Barely looking up from a puzzle, she deadpanned, “The cash wasn’t bad, either.”

Pudlin could play the Falstaffian clown, but his colleagues considered him one of most astute members of the House. At a time when the House Democratic caucus was bitterly divided, he became a strategist for Tom Ritter, helping win election as speaker.

Years later, he helped win progressive support for a moderate, James Amann, who became majority leader and then speaker, a deal that put two liberal allies in charge of the legislature’s two money committees, finance and appropriations.

“Dave Pudlin was an intellectual and political giant, who midwifed the progressive movement into maturity during his time in politics,” said Murphy, who first elected to the state House when Pudlin was leader.

“If you went to New Britain you knew what it was all about,” Ritter said. “He put together the coalition in New Britain that lasted for a long time. He was a fierce advocate, but at the same time he knew how to put groups together.”

“Politics to him was a chessboard,” Jepsen said. “He always was trying to think of moves ahead of everybody else, and he was good at it.”

Dave Pudlin was among the best. He would defend his position and his ideology to the death, but when he put down the microphone and walked off the field, he treated everyone like his buddy. ”— Lawrence Cafero Jr., former House Republican leader

Jepsen called him a Renaissance man, an omnivore of knowledge about politics, history or food. He was committed to left-wing politics.

“But he also knew when to stop pushing the envelope. He knew when not to let the perfect be the enemy of the good,” Jepsen said. “He could always reach a good compromise.”

Looney called him a scholar, albeit one who often made his points with humor.

“His erudition, he wore lightly,” he said.

Michael P. Lawlor, a former House member, said he once circumnavigated Puerto Rico by car with Pudlin, who kept up a running commentary on the island’s housing, its religious traditions and its political struggles.

“He would always tell you exactly what was on his mind,” Lawlor said. And, at times, that included sharing strategy and motive.

Cafero, the former Republican leader, said Pudlin had a skill and a nature increasingly rare in politics — an ability and a willingness to fight for an issue, then move on. Cafero, a pro-business Republican, and Pudlin, a union Democrat, clashed on nearly every issue.

“Dave Pudlin was among the best. He would defend his position and his ideology to the death, but when he put down the microphone and walked off the field, he treated everyone like his buddy,” Cafero said. “He was a breath of fresh air.”