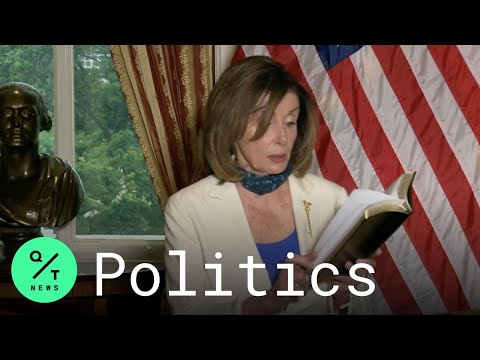 Nancy Pelosi Reads From Bible, Calls on President Trump to Be a ‘Healer in Chief’

Holding a Bible in her hand, Speaker of the House Nancy Pelosi criticized Trump’s visit to the historic church earlier this week. She also condemned his actions towards protestors and called for healing.

“Peaceful demonstrators in front of the White House were beaten — some people came out and beat them so they could clear the area so the president could come out and go forward. What is that?” she asked. “That has no place, and it’s time for us to do away with that, a time to heal.”

Pelosi then urged the president to “follow the lead of so many other presidents before him, to be a Healer-in-Chief and not a fanner of the flame.”

On Monday evening, Trump walked from the White House across Lafayette Square to hold a Bible in front of St. John’s Church, after peaceful protestors were cleared from the park.

The bishop overseeing the church criticized Trump for appearing for photos without praying or addressing the racial issues at the heart of nationwide protests. Other religious leaders have also condemned these actions.

The forceful dispersal began before the Washington, D.C., curfew had begun, a move that also been widely criticized by people on both sides.

The post Nancy Pelosi Reads From Bible, Calls on President Trump to Be a ‘Healer in Chief’ appeared first on Beliefnet News.

Nancy Pelosi Reads From Bible, Calls on President Trump to Be a ‘Healer in Chief’