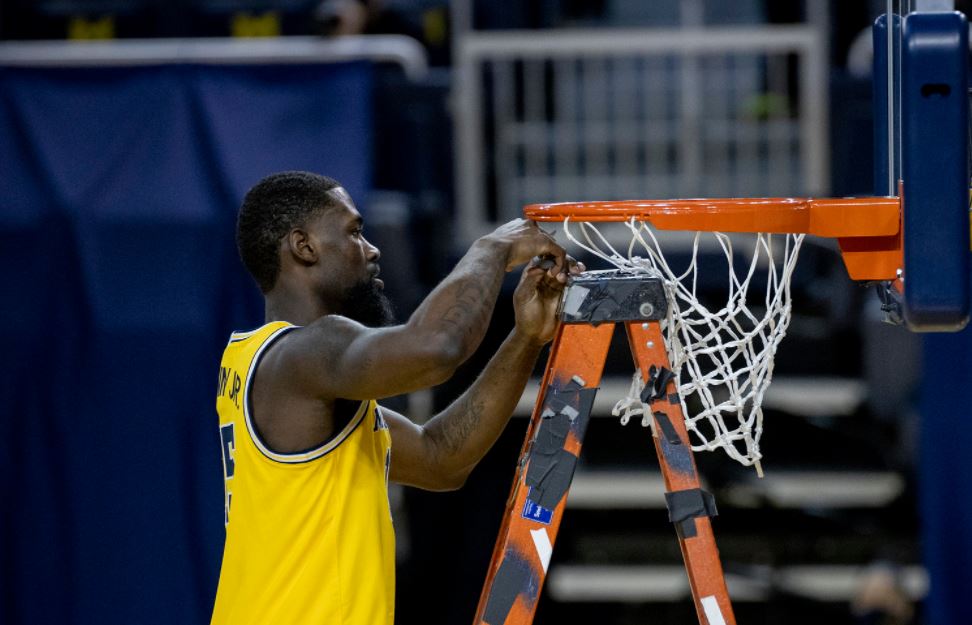 Well we can’t have everything. Michigan’s energetic three-and-d bench wing is also going to be a one-year rental, as Chaundee Brown Jr. announced on Twitter that he intends to enter his name in the draft and hiring an agent, meaning he’s not coming back.

Like the other seniors, Brown had the opportunity to come back for an extra year because of COVID. However the grad transfer from Wake Forest is already 22, and probably figures he’s gotten enough tape out there for the league to know if they’re interested.

Like fellow grad transfer Mike Smith, Chaundee dramatically changed his role at Michigan. A regular starter and inside-the-arc bucket-getter at Wake, Brown became an off-the-bench ball of energy, and a lethal outside shooter, launching more of those than two’s for the first time in his career, and hitting them at a 42% clip

Brown’s signature skill—well okay, his second signature skill—was converting those against closeouts. His 7/12 hot streak in the tournament was a major part of Michigan’s run to the Elite 8, and there were a few times when I thought one more pass his way against UCLA could have extended that run another round or two. While the Big Ten named Illinois’s Andre Curbelo the conference’s 6th man, they also named somebody other than Franz Wagner the defensive player of the year. Anyway Brown got to cut down the nets at the end of the season. We know what's up.

His signature skill, of course, was coming in like this:

He should catch on with some team, as both of those skills are marketable on the next level.

His old team should also be okay, with starting SG Eli Brooks back to settle the backcourt, some very skilled potential off-guards in Kobe Bufkin and Isaiah Barnes coming in. A good offseason, perhaps imbibing some of Brown’s attitude on defense, could also see Zeb Jackson blossom into a starter.

That doesn’t meant we won’t miss the senior, but that would have been quite a luxury. If Michigan’s not comfortable gambling on the above, they may now look to the portal for a true point guard since that’s not Brooks’s main thing. If there’s another Chaundee Brown, well, you’d take that every year. Hopefully an NBA team thinks so as well.

One of my favorite Michigan players to watch even with him only here for one year!

One of the easiest players to root for.  Just enthusiasm, smiles and Leroy Jenkins energy on the court

Goona miss him!  He was a ball of energy out there, always working hard and staying active.  Never saw him take a play off...  And his smile reminds me of Denard Robinson's.

Good luck in the League, Chaundee!!

Go forth and prosper, Chaundee.