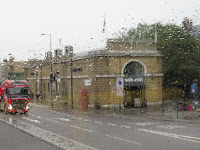 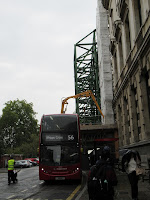 Giltspur Street would seem to be a quiet road behind most of Bart’s Hospital where there is clearly a major building project going on so the Number 56 sidled up to the bus stop obviously not keen to wait in front of a load of scaffolding on a dreary day, from which you will gather our photos were not scintillating. 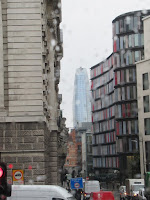 The dull weather was a pity as this particular route has a design of bus with large front windows as well as  a rather fetching eau de nil colour scheme for the interior paint and upholstery!  Exiting the City is always a circuitous process because of the many barred off and one way streets, and this was no exception. We had walked past the Old Bailey to get here yet drove in sight of it, and then round to another entrance to the hospital – it is such a venerable foundation it is certainly worth visiting its compact museum. 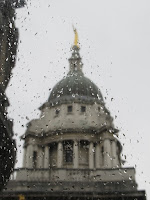 Talking of museums, this route also passes the Museum of London – its once new buildings now looking a little neglected while awaiting a planned move to the Smithfield site.  Also of the same era the route passes the Barbican complex – there are fewer ‘Macho’ skyscrapers or statement buildings at this end of the city, just some fancy cladding here and there, and so the transition into the less well-endowed neighbouring boroughs is not quite so noticeable .  The route continues along the Goswell Road with a variety of more homely shops – I was pleased to see someone still running a proper stationery shop (‘E’ for envelopes) in this age of order everything on line.  There are closed pubs too – the Hat & Feathers looked very desolate but had clearly been  clearly a huge establishment at  what was now the’ wrong end’ of Islington. 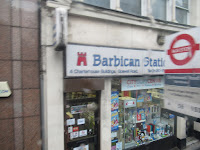 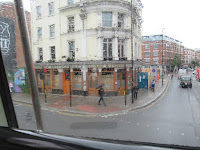 The Goswell Road arrives at the Angel End of smart Islington and we are greeted by a fine public clock in good working order (which is more than can be said for one we saw later on this route). Both Jo and I remembered when the Galleries on the right hand side had a series of antique shops with everything from furniture to jewellery but as with most former specialist shops eating outlets seem to have taken over.  Islington Green's grassy patch is quite modest, especially when seem from this side, and the Essex Road is also the more modest side of Islington, with a motley collection of small shops and international restaurants.  Though hard to make out through the raindrops there was a Peruvian eating place next door to an Ecuadorian one – on the street as in life. 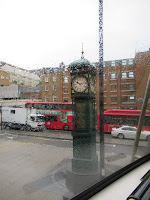 Jo is the resident historian but between us we could not work out who Lord Clyde, as in a pub name, might be: she hazarded an ennobled trades unionist from the Clyde shipyards (indeed there was one such) but I think this particular gastro pub was named after an army commander who saw action in various Empire building /defending wars. 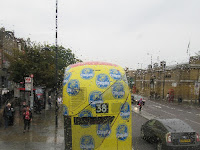 Turning right onto the Balls Pond Road took us on to Dalston Junction, a busy crossroads.  For much of the last stretch we had been following a banana yellow Number 38 that was advertising Chiquita Bananas, and on our return journey we saw a similarly disguised 55. I could find some publicity for last year's campaign but not for 2019.
From the Junction we continued down Dalston Lane, winding a bit as the name suggests, and wondered why anyone might need ‘Three Compasses’.  The pub website promises me lots of ‘pop-ups’ but no explanation. 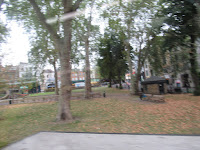 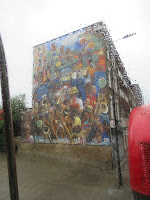 Along this stretch you can also see the Metropolitan Benefit Society Almshouses,  and further along the very impressive Navarino Mansions which were also built  to house single occupants in need of social housing, and still offer some supported accommodation.  These heritage homes are very handsome but not really best equipped to house either very infirm or no longer mobile residents... 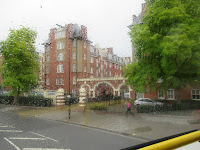 Just skirting the Clapton Ponds, to which we would return later, we headed even further north and east after the Lea Bridge roundabout towards Lea – for some reason I have Lea fixed in my mind as very outer London, but in fact it is just beyond Hackney Downs. This misapprehension is probably due to the fact there suddenly seems to be a lot of green and open space,  Millfields Park then the green areas surrounding the River Lea which  is where we crossed followed shortly by a more anonymous stretch of water – probably the end of the Dagenham Brook which as this blog entrywill tell you has nothing to do with Dagenham but everything to do with the Lea. 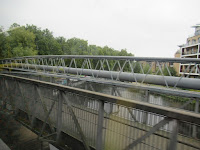 Thereafter we were well into Waltham Forest and smaller older properties in amongst which there was a mosque with some fairy lights, which must look jolly at night. 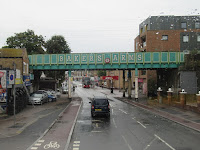 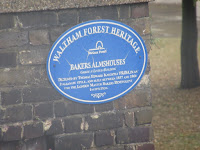 We had been bowling along quite happily, never taking on very many passengers, but it did take us a while to cross the Lea Bridge Road crossroads – I would have liked to be lingering beside the Bakers Arms, another set of almshouses which gives its name to this part of Leyton, but instead we hovered waiting near a bus stop and a more modern bakery. I love the thought that these now listed  properties  were built for Master Bakers – I suppose we could set up homes for unsuccessful candidates on the ‘Great British Bake-off’ ? 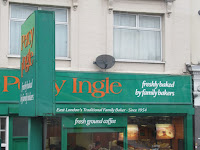 Once over the crossroads it is only a couple of stops to the end of the line, namely the Whipps Cross (no longer a roundabout but a landscaped T Junction (Interchange)  said to be safer for pedestrians and cyclists too. 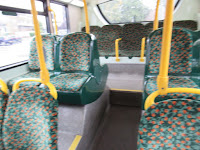 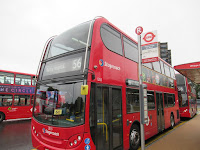