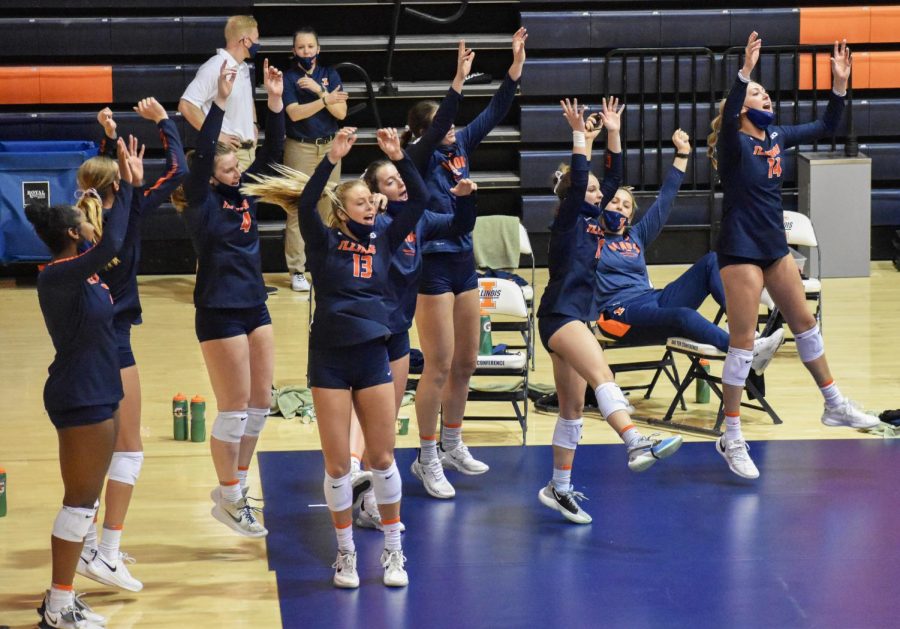 Illinois finds energy with its bench

Last Friday, Huff Hall was the loudest it had been all season. For the first time this season, family members were allowed to attend matches against Indiana. With roughly 50 people in attendance, the atmosphere transformed.
Whenever the Illini won a big point or went on a run, there was an electricity in the building that hadn’t been there all year.
“I counted it,” said redshirt sophomore setter Diana Brown. “I think it’s been 109 days since I’ve seen my parents. So, today was the first time I got to see them and that was really great. But you know, I think (tech coordinator Ryan Anton) said it best. We’re used to the Huff Hall atmosphere where it’s rocking and everyone’s clapping their hands (and) stomping their feet. Then, just this year, we got used to no fans. We turn it up as a team, and I don’t think that we turned it down today even with fans. Really proud of the bench. They brought the energy and just helped us on the court. It’s really good to look out and see people supporting you.”
With Illinois being so far into the season, the team had gotten accustomed to playing without fans and had put an emphasis on keeping the energy up with their bench to help supplement the emptier building. Throughout any given match this season, the Illini bench can be found doing everything from screaming after big points, to dancing and even playing an old playground game of ninja.
In the face of the COVID-19-influenced season, injuries and a ten-match losing streak, the bench has remained steadfast in bringing energy and supporting the team, which, according to freshman Raina Terry, is one of the most overlooked aspects of the game.
Even injured redshirt freshman Ellie Holzman, who is recovering from a torn ACL, attends every home match despite the difficulties of wearing a brace, having to walk on crutches and sitting with her leg elevated.
“We’ve really talked about how it’s truly a team sport and it’s not just the people who are on the court,” Brown said. “Our energy is contagious, and so when people on the bench bring it, that flows through us and it goes on the court. We talk about being the best teammate that you can be and giving it your all every single day, so just really proud of everyone giving it their all, even if their job is to bring the energy.”
The team has a handful of those “energy” people, with players like Mica Allison, Sophie Gregus, Emily Hollowell, Alyssa Eske and Kylie Bruder among those supporting the team on the bench at different points this season. Brown has made special mention of Gregus’s loud voice, which supposedly carries throughout the gym.
With head coach Chris Tamas shifting the team’s rotation from a 6-2 to a 5-1 midway through the season, the specific players on the bench have changed a lot, but the energy has remained the same.
“It’s something we’ve talked about that great teams do,” Tamas said. “Whether you’re on the winning side or the losing side, you’ve got to be able to bring energy. It puts you in the best position to win points and win matches. I think between players on the court and players on the bench on the sideline, they’ve just been doing a tremendous job of bringing the energy, and I really appreciate it.”
With fans starting to trickle into arenas, the importance of Illinois’ bench may shift a bit. At Illinois, family members were the only fans allowed inside, but at other schools, the restrictions may differ.
Regardless of how many fans are at matches, the bench will always be the closest source of support for everybody on the court, and with such a committed bench this year, the Illini may be set up for years to come.

The post Illinois finds energy with its bench appeared first on The Daily Illini.

Illinois finds energy with its bench