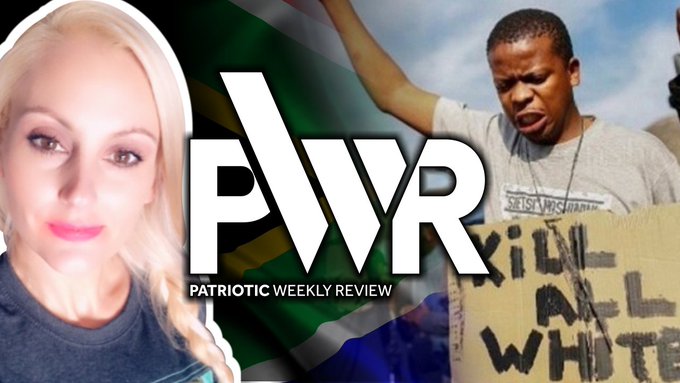 Mark Collett and No White Guilt are joined by Brandi Sheats, a Texan activist who specialises in advocating for South African Whites.

Brandi talks about how she would need 24hr security if she was to go to South Africa, as she has assisted in filing cases against the ANC and their banking institutions.

The water supply there is polluted and there are now rolling blackouts, due to diversity quotas ensuring Whites are replaced with incompetent and inexperienced Blacks.

Every sphere of work has been affected by this and Whites are prevented from holding any official positions.

The tiny White population is made the scapegoat for all the incompetence of the ANC and hatred of Whites is encouraged.

Facts are ignored and a false history has been taught, in an effort to deflect from the real source of South Africa’s problems.

The Whites pay 90% of the taxes and provide 70% of the food for Africa, yet every president since Mandela has called for their slaughter.

Despite all of this and the rampant torture, rape and murder of White farming families, there are still Liberals that refuse to see what is going on in front of their very eyes and are trying to censor the people speaking up about this.

Brandi saw what Trump had managed to do through Twitter and has tried doing the same by highlighting subjects likely to gain attention, like ISIS training camps, weapons being funnelled to South Sudan, Uranium mining, government corruption including murders within the ANC and land expropriation.

Thanks to her filing cases with the ICC, the Hague and elsewhere, there are now sanctions against one banking institution and hopefully there will be more.

Presented by Mark Collett and No White Guilt

Patriotic Weekly Review will be back on Radio Albion Wednesday at 2pm EDT/ 7pm GMT, watch it live here.
See the daily radio schedule for more pro-White audio available for download
Join the chatroom and follow the feed

We can accept donations sent to this Bitcoin wallet number: