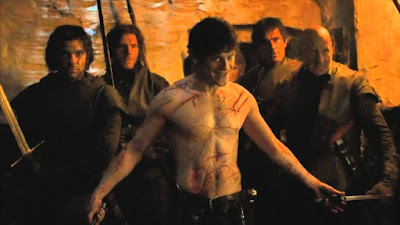 
I've been dying to write this piece.  Beknownst to some, while Tywin is my favorite character of all time, I also really like Roose Bolton.  I think of him as the Tywin of the North because they're so alike in a lot of ways.  In fact, when you dig down a little deeper into the origins of House Bolton, you will find many disturbing and interesting things about them.  Mechanically, I think they play very close to their book representation and that means a lot of death and terror.  For now, I think Boltons' are the strongest when paired with House Lannister because of a lot of their tactics cards and toolkits synergizes with Lannister control elements.

Let's jump straight into a list that I've been messing with lately.  Since I'm going to turn this into a 2-part show, let me start with something that I've had quite a bit of success with.  To say it's pretty freaking brutal is an understatement.

Just so you guys know, I absolutely hated Ramsay in the show.  I still can't decide who I actually hated more, him or Joffrey, and that's an achievement in itself.  To make things short and sweet, Ramsay's a battlefield commander through and through.  He likes to get in there and chop people to bits to spread fear directly.  When he pops his Order to Flay Them All! after a unit fails a Panic test, another unit within Long Range has to take a Panic test.  This is a great mechanic to have in a unit of MM because of the Vicious inflicting a -2 modifier.  The affiliation to House Bolton is something we will talk about once we take a look at his Tactics Cards.  Before we forget, let's talk about poor Theon who Ramsay brings along with him.  Having Theon dragged around with you basically allows Ramsay to auto-panic an opponents' unit every turn, but the downside there is that if you roll a 5+, Theon dies.  Boohoo, I guess.


The biggest weakness to this list is the low activations and deploys, but outwitting the opponent isn't something I'm going after.  I'm looking to get in there and murder the enemy in every way possible.  When you look at cards like Our Blades are Sharp, you will see that's one of the most damaging tactics cards in the entire game.  If you attack a Panicked enemy, your attack gains +1 to hit and +2 dice on the attack.  If you're a House Bolton unit, the defender also becomes Vulnerable.  This is why I have 2 real House Bolton units in the game and a MM with the House Bolton affiliation.  Make no mistake:  This one card absolutely sky-rockets your units ability to deal damage.  With a plentiful amount of Critical Blows, Vicious, and 3s to hit across the entire army, you will have plenty of chances to inflict maximum hurt on the enemy.  Cruel Methods is activation cheating, simple as that.  You play this card at the start of the round, regardless of whose turn it is and you get an out-of-turn free attack action.  Sure, there are downsides to this card if you don't manage to destroy the enemy unit, but with 3 House Bolton units on the field using max dice and re-rolling misses, you better do some work.  An amazing target for this is your Bolton Cutthroats with Assault Veteran.  If you pop this on them and that unit is already engaged with something, you will be rolling 10 dice, hitting on 2s with re-rolls, making the Vulnerable, and they have to test Panic with Vicious.  If it's going to be your unit activation, you can just cap the Combat zone with Varys and go again if that unit is somehow still alive and your guys are still around.  I'm telling you, it's bananas.  Lastly, we have Sadistic Games, where at the start of a friendly turn, your opponent has to pick either to have 2 of his units to be Panicked or suffer D3+2 automatic hits.  If he understands Ramsay at all, he'll go for the extra hits because at least he has a chance to save them.  Having 2 units being Panicked just sets them up to be abused later by Our Blades are Sharp.


Let's talk about the unit selection super quick:  Mountain's Men should be pretty straight forward.  You have Critical Blows and Vicious who works great with Ramsay's tactics cards.  Bolton Cutthroats with Assault Veteran is a match made in heaven, and having a Dreadfort Captain on the MMs help spread Panic whenever the opponent fails their Panic test (which should be often due to Vicious).  The giant elephant in the room is the fat-stack of The Mountain + Flayed Men.  Let's get one thing straight here:  This is 32.5% of your army and in most cases, can be considered a deathstar.  Now, I normally don't like to do this kind of thing, but I think Ser G + Flayed Men are one of the strongest units in the entire game by far, especially when you have them in damage amplifying list like this one.  For me, the best way to get value out of these guys is to take them in a list that will almost guarantee they make their points back.  If you think about in terms of points:  A 13-point unit better kill at least 13+ points to break even or be considered a unit well-spent.  This is, after all, 2 more units of Mountain's Men or even close to 3 units of Cutthroats or Lannister Guardsman.  It's a huge investment and I need people to realize that they do have weaknesses, that you can play around them quite easily, that mission objectives do matter, and there are plenty of tactics cards and combos out there that can stifle their damage or end them entirely.  I do not consider them over-performing at all, but they are nasty.

So why did I bring them?  Well, for one, Gregor applies free Panic that unlocks Our Blades are Sharp automatically and also automatically deal D3 wounds.  The fact that you can play Our Blades are Sharp on this unit is something out of this world, because now, on the charge you have 10 attack dice, hitting on 2s and re-rolling, Critical Blows + Vicious, Panic + Spread Fear, you make the unit Vulnerable, and you deal D3 extra wounds from The Mountain just because you can.  If that doesn't roll over many people, it will reduce them to almost combat ineffectiveness status and they will then try to retaliate against a unit with 2+ save.  If you wipe them out or start the round with Cruel Methods, you can then Overrun into another unit with a free Charge action to start the chaos all over again.  I don't know what to say, this unit with Ramsay is absolutely absurd considering how many extra, free combat rounds you can get from it, all the while spreading Panic tokens around because of Spread Fear and Vicious.

Yes, the unit above is ridiculously strong and I would say almost designed for Ramsay to take advantage of.  However, it's hugely expensive and that's why a unit like that doesn't perform well in objective-based game modes.  With only 4 combat units, one of which is a 13-point unit from hell, you can't possibly dedicate it to capturing points.  What you need to do if you're piloting this list is to use that unit to smash everything in its way to smithereens.  However, this will require you to have the right cards in hand which is something you should never build your strategy around.  Before I forget, that unit, as mighty as it is, has one giant flaw that needs to be called out:  It is hugely weak against anything that can blunt the initial assault.  A lot of the damage comes from the Abilities that the unit has attached to it so if you take those abilities *cough, Martial Supremacy, cough*, it's pretty much a declawed cat.  You can then trap the unit by engaging it from multiple sides (such as Grey Wind) and apply Greataxes to face.

Finally, I'd like to mention that Tywin as an NCU is still amazing.  In fact, I think he has one of the best once-a-game abilities in the game because it completely makes an enemy unit worthless for a round.  Funny enough, Tywin is also probably one of the best counters to something like the Gregor Flayed Train of Death.
Source: lkhero