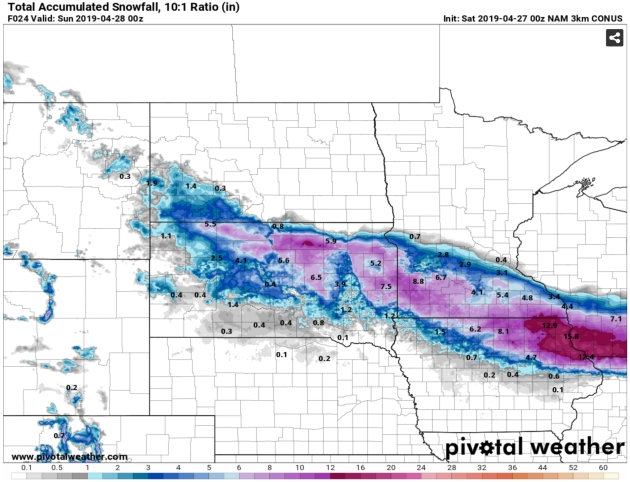 Here’s a humbling thought: every weather map is different. Patterns may be similar, but never identical. Weather-wise (and otherwise) there has never been a day exactly like today. That, and the forecast is rarely black or white, but rather some nebulous shade of gray.

Welcome to my latest meteorological migraine. Today the MSP metro will be on the northern edge of the precipitation shield, as well as on the edge of rain vs. snow.

A cold rain should quickly change to heavy wet snow; a 6-8 hour burst of slush, capable of a coating to an inch or at MSP.

Amounts increase south and east of the metro. A Winter Storm Watch is posted for southeastern Minnesota, for some 6-inch-plus amounts. Never a dull moment here in the Super Bowl of Weather huh?

A cold rain is possible late Sunday and May kicks off on a cool, unsettled note early next week before 60s return next weekend.

I feel bad for farmers, unable to get out into their fields. On a drive to Willmar yesterday I saw standing water – miniature lakes – on far too much cropland.

European Solution. ECMWF also keeps the heaviest snow bands well south of the Twin Cities, with as much as 4-8″ for far southern Minnesota by Saturday night. Map: WeatherBell.

Advisories, Watches and Warnings. The axis of heaviest snow is expected from southeastern Minnesota and northeast Iowa into southern Wisconsin and even the far northern suburbs of Chicago, where a bandof 6-12″ may pile up. Amazing. Map credit: Praedictix.

Things I Thought I Would Never See. In this week’s edition of Minnesota WeatherTalk Dr. Mark Seeley summarized a list of head-turning weather events that made him connect the dots; here’s an excerpt: “…At some recent public meetings about climate change in Minnesota I was asked by members of the audience to describe some characteristic changes in weather and climate that I never thought I would see. After contemplating for a while I came up with a brief list:

Snow On The Way For Saturday. An area of low pressure will cross the central United States during the first half of the weekend, bringing a swath of late-season snow along with it. The heaviest snow is expected to fall across southern Minnesota into northern Iowa, southern Wisconsin, and western Michigan, where snowfall totals of more than a half a foot are possible. Snow could fall at a rate of 1-2″ per hour at times during the event, making travel difficult due to potential accumulation on roadways.

Expected Snow. A band of 4-9″ of snow is expected to fall from southern Minnesota and northern Iowa to western Michigan Saturday into Saturday Night. The good news is that April snow doesn’t typically stick around too long, and the snow that falls this weekend will quickly melt away over the next several days as temperatures warm back.

Americans Are Among The Most Stressed People in the World, Poll Finds. I can’t imagine why we’d be stressed, can you? Here’s a clip from a New York Times summary: “Americans are among the most stressed people in the world, according to a new survey. And that’s just the start of it. Last year, Americans reported feeling stress, anger and worry at the highest levels in a decade, according to the survey, part of an annual Gallup poll of more than 150,000 people around the world, released on Thursday. “What really stood out for the U.S. is the increase in the negative experiences,” said Julie Ray, Gallup’s managing editor for world news. “This was kind of a surprise to us when we saw the numbers head in this direction…”

Children Under 5 Should Get No More Than 1 Hour of Screen Time Every Day, WHO Says. ABC News has details: “The World Health Organization (WHO) has released new guidelines on the importance of physical activity and adequate sleep for young children, which includes recommendations on how little screen time they should get. One of the most striking suggestions a WHO panel of experts suggested is that children under the age of five should get no more than one hour of “sedentary” screen time, adding that “less is better.” When sedentary, children should be engaging in activities such as reading, storytelling, puzzles and singing with a caregiver instead, the agency said in a press release published Wednesday...”

Best Time to Pee During a Long Movie? There’s an App for That. CNN.com has the story: “The website Runpee.com has been around for more than a decade, advising movie-goers about the best time — should nature call — to run out for a bathroom break. Still, with this weekend’s release of the three-hour-plus “Avengers: Endgame,” the site/app might be ready for its closeup. “This is as big a movie as we’ve ever done for Runpee,” Dan Gardner, the app’s founder, told CNN, adding that the app has just over 100,000 registered users. Notably, it was another three-hour movie, Peter Jackson’s 2005 remake of “King Kong,” which gave Gardner the idea for the site. As he tells it, he needed to go but didn’t want to exit the theater, lest he miss a key scene.Within a few years, that seed blossomed into an actual website/app, one that provides cues regarding when to leave without missing anything that’s fundamental to the plot or story. It is, of course, a somewhat subjective measure, which explains why the site also solicits feedback from film patrons…”

April 27, 2002: Heavy snow falls over the Twin Cities and central Minnesota. Chanhassen receives 6 inches, and vivid lightning is seen with the snow during the evening.

April 27, 1996: Embarrass records a low of 9 degrees. Some central, and most northern, Minnesota lakes are still ice-covered.

Greenland is Falling Apart. Ice melt appears to be accelerating, according to new research highlighted at The Atlantic“…The paper casts the transformation of the Greenland Ice Sheet as one of the profound geological shifts of our time. Scientists measure the mass of ice sheets in “gigatons”—each unit equal to 1 billion metric tons, or roughly the same amount of water that New York or Los Angeles uses in a year. Greenland, according to the study, has lost 4,976 gigatons of water since 1972. That’s enough water to fill 16 trillion bathtubs or 1.3 quadrillion gallon jugs. That much water weighs about 11 quadrillion pounds. (A quadrillion is 1 with 15 zeros after it.) More worryingly, the paper finds that Greenland lost about half of that ice—roughly 2,200 gigatons—in the years between 2010 and 2018. The ice sheet has also failed to gain mass in any year since 1998…”

Photo credit: “NASA researchers burn leftover wood on the Helheim Glacier, which is one of the fastest-moving ice floes in Greenland.” Lucas Jackson / Reuters.

8 Ways to Teach Climate Change in Almost Any Classroom. NPR has the story: “NPR/Ipsos conducted a national poll recently and found that more than 8 in 10 teachers — and a similar majority of parents — support teaching kids about climate change. But in reality, it’s not always happening: Fewer than half of K-12 teachers told us that they talk about climate change with their children or students. Again, parents were about the same. The top reason that teachers gave in our poll for not covering climate change? “It’s not related to the subjects I teach,” 65% said…”

Golman Sachs, Bank of England and Treasury Targeted by Climate Activists in London. Reuters has details: “More than 300 environmental activists sowed chaos through London’s financial district on Thursday, gluing themselves to the stock exchange and blocking roads outside the Bank of England and major banks such as Goldman Sachs. The Extinction Rebellion group has spent 11 days disrupting London in a bid to force Britain to act to help avert what they cast as a climate cataclysm. On Thursday, they turned their attention to London’s financial institutions and the City – home to more international banks than any other and the global center for foreign exchange trading…”

Oil & Gas Majors Using Free Rehab Labor: Headlines and links via Climate Nexus: “At least two major oil companies have benefited from free–and likely illegal–labor provided to them by drug rehab companies forcing addicts to work long hours as part of a faulty therapy program, according to a new investigation. A year-long Reveal and Center for Investigative Reporting collaboration shows how Texas rehab nonprofit Cenikor contracted with Shell and Exxon, among other giant corporations, to send addicts to work for free on a refinery and building an oil platform as part of “work-based therapy.” The company received $7 million from work contracts last year, while participants received little actual therapy and often suffered serious injuries on the job. “It’s like the closest thing to slavery,” former Cenikor participant Logan Tullier, who worked 10-hour days at a refinery in dangerously hot conditions, told Reveal. “We were making them all the money.” (Reveal)

How Climate Activists Can Communicate Better. A story at Pacific Standard caught my eye – here’s an excerpt of an interview: “...I actually am not surprised at all that we haven’t taken aggressive national action on this issue, because nobody’s really demanding it yet; not in an organized, powerful way that has a prayer of defeating the special interests that absolutely just want to maintain the status quo. I mean in particular, of course, the fossil fuel industry. It’s willing to spend, and have spent, billions of dollars on public relations to try to keep the status quo right where it is. So when you don’t have a powerful set of citizen voices demanding action against an opponent that has invested a lot of resources, and very strategically, to influence the political system—I can’t say I’m all that surprised that we as a country haven’t moved that much…”

The Uncanny Power of Greta Thunberg’s Climate-Change Rhetoric. Here’s a clip from The New Yorker: “…Yesterday, Thunberg repeated the phrase. “Avoiding climate breakdown will require cathedral thinking,” she said. “We must lay the foundation while we may not know exactly how to build the ceiling.” In Westminster, Thunberg’s words were shaming. Brexit is pretty much the opposite of cathedral thinking. It is a process in which a formerly great country is tearing itself apart over the best way to belittle itself. No one knew what to say to Thunberg, or how to respond to her exhortations. Her microphone check was another rhetorical device. “Did you hear what I just said?” she asked, in the middle of her speech. The room bellowed, “Yes!” “Is my English O.K.?” The audience laughed. Thunberg’s face flickered, but she did not smile. “Because I’m beginning to wonder.”