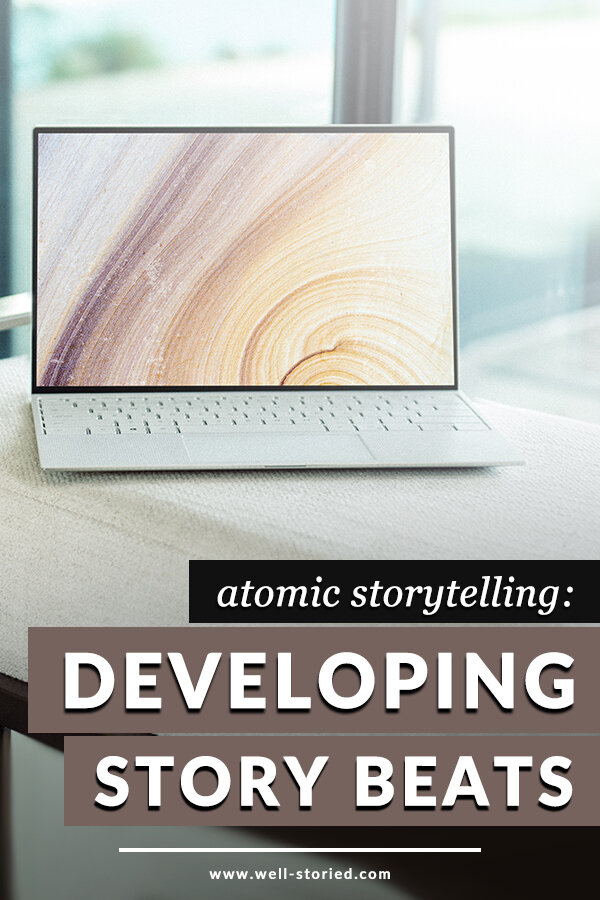 
When writing, storytellers possess the god-like power to make something out of nothing. To create worlds where previously none existed and breathe life into characters whose journeys are entirely of their own creation.

To make something out of nothing (and better yet, to do it well), it’s important to understand the composition of the thing one is trying to create.

For storytellers, a major component of this composition is structure. Every story features at least one arc of events. This arc can be broken down into acts, which are comprised of chapters that contain scenes.

I’ve discussed each of these tiers of story structure here on the blog, but the one element I’ve yet to explore in detail is perhaps the most atomic aspect of a story’s composition: its beats.


What is a story beat, exactly?

In his masterful book on the craft, Story, Robert McKee defines a beat as “an exchange of behavior in action/reaction.” In simpler terms, a story beat is a turning point — the moment between action and reaction in which readers understand that something is about to change, leading them to ask what will happen next.


Beat: Tony Stark learns that Bucky killed his parents. How will he respond?

Beat: Darcy confesses his love for Elizabeth. How will she reply?

Beat: Prim is chosen to represent District 12 in the Hunger Games. How will Katniss react?

I’ve often mentioned that every scene in your story needs a turning point, that if nothing has changed in your characters’ lives by the time a scene ends then the scene lacks purpose and direction. Without a turning point — without a beat —your scene is dead.

That said, not every story beat needs to be a grand, memorable moment. The simplest of shifts can propel your story forward, and it’s often these subtle turning points that compose the bulk of a story, dotted with the occasional hyper-suspenseful moment that keeps readers on their toes.

Literary genres are often defined by their popular beats. Consider the meet-cute in romance novels or the moment the “monster” first attacks in horror fiction.

Author and editor Savannah Gilbo breaks down popular genre beats on her blog in articles such as:

Many writers enjoy creating a bulleted outline of their story’s beats to help them develop, draft, and revise their stories. This outline is also called a “beat sheet,” a term popularized by the bestselling screenwriting book Save The Cat! by Blake Snyder.

You can find beat sheets for many popular movies on Snyder’s website.

A story’s turning points are frequently classified as either action beats or emotion beats.

Understanding the beats that commonly determine plot and character arcs can help writers craft sensational stories. It’s these beats that I discuss in my article on the 3-Act Story Structure, as well as those that explore positive, negative, and static character arcs.

However, it’s important to note that action and emotion play an equally intricate, interdependent role in well-developed stories. Humans are, after all, emotional creatures. Our feelings frequently determine our actions, just as others’ actions prompt emotional responses within us.

This interaction between action and emotion is why many of the beats in plot and character arcs share similarities or even lead one into the next. When Prim’s name is called at the Reaping, it’s Katniss’s fear and horror that drives her to volunteer in her sister’s place. Thus, external action breeds emotional reaction breeds external action.

With this in mind, pay special attention to how your characters’ external and internal conflicts intertwine when plotting your story’s beats.

A story’s turning points are called beats because their frequency sets the pace of a narrative. The more beats a story contains, the faster its pace. The fewer beats, the more languid and measured. Consider the difference between an international thriller and a contemporary family drama.

Like a pulse, well-developed stories should beat consistently. Sure, a story’s pace may ramp up leading into major moments of tension, but this increase should occur gradually and smoothly.

If beats occur irregularly, readers will begin to feel that something is amiss. Perhaps the last few chapters have felt rushed, featuring too many beats in sudden, quick succession. Alternatively, perhaps the middle of the story is dragging, with too few beats to maintain readers’ interest.

A well-placed beat falls in the middle of what I’ve previously called “the pacing cycle,” the structure of events that repeat to form a story’s pace. In my article on pacing, I defined this cycle as 1) conflict, 2) physical consequence, 3) internal consequence, and 4) resolution.

In hindsight, I would refine this cycle to acknowledge that beats are a key moment in the atomic arcs that occur repeatedly throughout a story:

4) Climax: The key players react; and thus the story shifts.

5) Resolution: The key players face the consequences of the beat, which re-shape their reality; the cycle repeats.


You can see this pacing cycle play out in The Hunger Games:


1) Introduction: Katniss, Gale, and Prim arrive in the town square for the Reaping.

2) Rising Action: The mayor describes the history of the Hunger Games, revealing the horrifying reality of what happens to those who enter the arena.

3) Crisis: Effie Trinket selects the name of the female tribute: Prim. At that moment, Katniss’ life takes an inexorable turn.

5) Resolution: Katniss must say goodbye to her friends and family and board the train bound for the Capitol.


The cycle repeats as Katniss and Peeta convince Haymitch to take his duty as mentor seriously, as Katniss learns that she must become a stylized icon for the Capitol’s entertainment, as she gains renown as the Girl on Fire during the Games’ opening ceremonies, and so on.

Of course, thinking at this atomic level when writing can become tedious and overwhelming.

However, there’s a good chance that you’re already working with this cycle in mind given that you’ve internalized storytelling principles with every book you’ve ever read — which is to say that it’s okay to forgo actively considering your story’s beats and pacing cycle as you write.

If at any point in the writing process you find that a particular scene or passage just isn’t working, taking a good, hard look at its atomic structure may prove helpful. To troubleshoot the issue you’re facing, you may wish to ask yourself:


• Does this scene lack a necessary beat?
• Are my characters moving too quickly from introduction to crisis?
• Does the beat fail to effectively shift the landscape of my story?
• Am I giving my characters time to face the consequences of the latest beat before tossing them into the next?


Use these atomic storytelling principles to guide you in developing, drafting, and refining your work, and you’ll soon craft powerful and effective story beats that keep readers turning pages.

Spam isn’t our jam. Unsubscribe at any time.