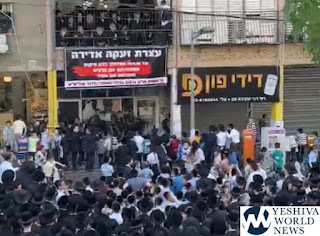 Extremism and the Charedi Narrative about Smartphones

Obviously these Charedim are extremists with lots of time on their hands. And very likely ignorant of the skills needed to lead productive lives. No normal Charedi would do what these Charedim do. As I often say (contrary to popular belief) one cannot – should not – paint an entire community by the acts of the few. But that does not let this community off the hook entirely - with respect to their leadership.  YWN reports the following:

The most recent incident took place on Thursday when Dovid Davidoff, the owner of Didi Phone in Bnei Brak, was attacked right next to his store. The attacker was a ruffian who was participating in the protest against the store after Davidoff refused to surrender to edicts (not to sell smartphones) from the self-appointed “Va’adat HaRabbanim” who have decided to put themselves in charge of communications for the populace of the city.

Davidoff was punched in the face on Rabbi Akiva Street. Police officers who were nearby, arrested the attacker, took his details, and then released him.

This all too familiar occurrence has been going on since the very beginning of the technological age. And it has been condemned by the Charedi leadership each time.

If that’s the case, what’s my problem? Why assign any blame at all?

Here’s the thing. The Charedi leaders (especially those in Israel) are actually on the same page with these extremist in terms of how they view smartphones. They consider them to be evil and  a major impediment to the spiritual welfare of observant Jews. (For reasons that are both obvious and not so obvious – but beyond the scope of the post.)

Extremists – without the consent or approval of mainstream Charedi leadership – have nevertheless made it their mission to see that those bans are enforced. That has generated ill considered protetsts in Bnei Brak and Jerusalem like the ones described in YWN.

Among those protestors are people who see themselves as a modern day Pinchas – who fulfilling  the biblical mandate of Kannoim Pogim Bo.  They think that they are acting according to the highest standard of a religious Jew by using violence in thr name of God – the way Pinchas did when he killed a Jewish leader and his non Jewish paramour for their public act of sin.

That their leadership did not tell them to do it - or  might even condemn it is seen by them as their public face, But secretly approve of. I’m not saying that they do. I cannot speak for their leadership. But that is probably what these extremists believe. How can they not? Considering the harangue against technology in general and smartphones in particular those leaders constantly make!

This is what has to change.  Instead of considering smartphones as evil incarnate, a little bit of reality would go a long way here. I don’t think I have to sell anyone reading this on the value of a smartphone. Only someone completely ignorant of what this technology is capable of would consider it entirely evil. It could very well be true that those leaders understand that smartphone and thereby deserves to be banned.

This is where they fail. Their knowledge about the good they might admit to is woefully underestimated. thw fact that they do not use them should make that obvious. if you only know about an object like a smartphone what you are told about it, you are never going to be aware of how valuable it can actually be.

This is of course not to say there is a downside. You don’t have to be Charedi to know that. The ‘evils’ of technology are well known across all demographic strata - Jew and non Jew alike.  It is the big issue of our day.

The solution is not to ban such a useful object. It is to teach people how to use it properly so that they are not harmed by its misuse. How to do that is (as I often say about many things) is beyond my pay scale.  But it can be done.

Not everyone missuses it. I have a smart phone and do not misuse it. I do not spend hours upon hours on it. I do not text all day. I do not use it as a substitute for personal relationships. I do not use it when I am interacting with other people. If for example I get a text notification, I ignore it until such time it will not interrupt anything. In other words I do not let it control me. I control it!

Be that as it may, the point here is that Charedi leadership should realize that there are many things in life that one can use for good or bad and the smartphone is just one of them. Just because there is a bad side does not mean it should be banned. By way of imperfect analogy – If someone to uses the Torah for bad (for example by quoting passages out of context to show how archaic and evil it is) - should Torah study be banned?

If smartphones are treated more realistically they would not be seen as something to ban. And thereby not to protest or attack people that sell them.

That does not mean the extremist will go away. They will surely find some other reason to protest violently. But at least smart-phones will no longer have any justification for it. And people like Dovid Davidoff, the owner of Didi Phone will be able to live in peace, sell smartphones, and prosper.

Extremism and the Charedi Narrative about Smartphones